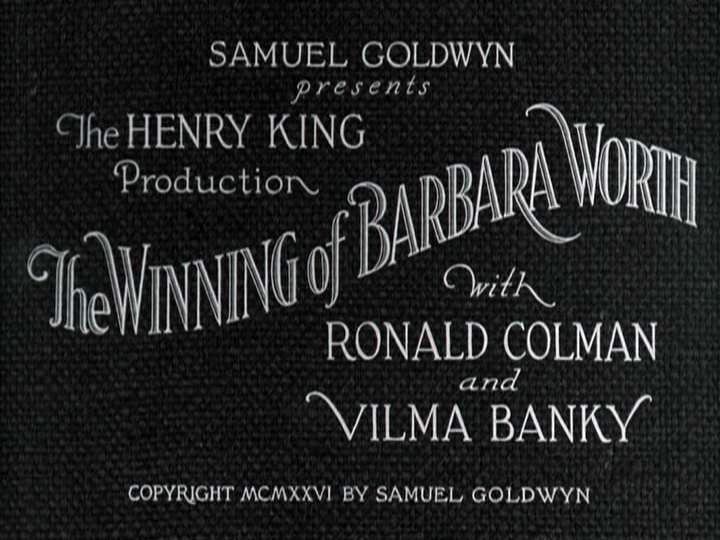 When it came to attracting the eye of some of the biggest silent screen legends, Vilma Bánky had no peer. After acting in a few films in her native Hungary, producer Samuel Goldwyn spied her in 1925 and persuaded her to come to Hollywood. She agreed, and became an immediate sensation. First paired with Ronald Colman in the hit The Dark Angel (1925), she went on to play against Rudolph Valentino in two of his most famous films, The Eagle and The Son of the Sheik, before returning to costar yet again with Colman in The Winning of Barbara Worth (1926). And if being romanced on screen by Valentino and Colman wasn’t enough, take note: the other rival for her affections in Barbara Worth was none other than Gary Cooper in his first featured role.

The Winning of Barbara Worth is gorgeously shot by legendary cinematographers George Barnes, already an established quantity in Hollywood, and his assistant Gregg Toland, who was just starting out at the time. Filmed in Black Rock Desert near the towns of Trego, Winnemucca and Gerlach, many locals were hired as extras, and ranchers were paid to round up their livestock and bring them in for several scenes. The conditions were brutal, with temperatures reaching up to 124°F, and sandstorms and thunderstorms rolling in with alarming frequency. There were injuries, fisticuffs and alarming incidents with some of the genuine cowboys hired on, a few of whom ended up in jail. 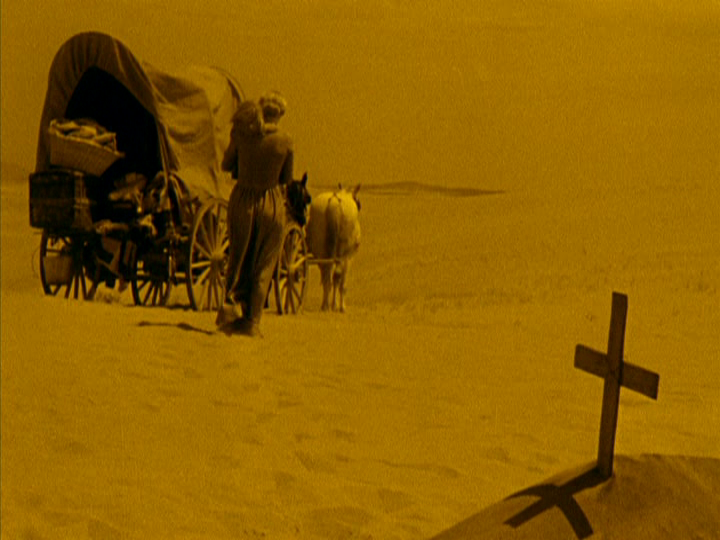 Based on the best-selling book by Harold Bell Wright, adapted by Frances Marion, produced by Samuel Goldwyn and with no expense spared, Barbara Worth is beautiful and entertaining, if not a particularly challenging story. For all its good intentions, exceptional production values and fine acting, at heart it’s merely a love triangle set in the then-popular locale of the desert, with the also-popular catastrophic flood scene for a finale.

If Barbara Worth fails as the highbrow entertainment it was intended to be, it succeeds in so many other areas that complaining that it is not quite an epic seems singularly pointless. Many critics were lukewarm on the film when it was released, though in later years, critics considered Barbara Worth notable for its historical accuracy, both in the building of the dam and irrigation systems and in the portrayal of those long-lost small desert towns:

Film historian Kevin Brownlow calls the film “extraordinary” and claims that the “documentary reconstruction of  The Winning of Barbara Worth is of such a high standard that it places the film on another level with the other Western epics, The Covered Wagon and The Iron Horse.” (Quoted in Without Lying Down: Frances Marion and the Powerful Women of Early Hollywood by Cari Beauchamp.) 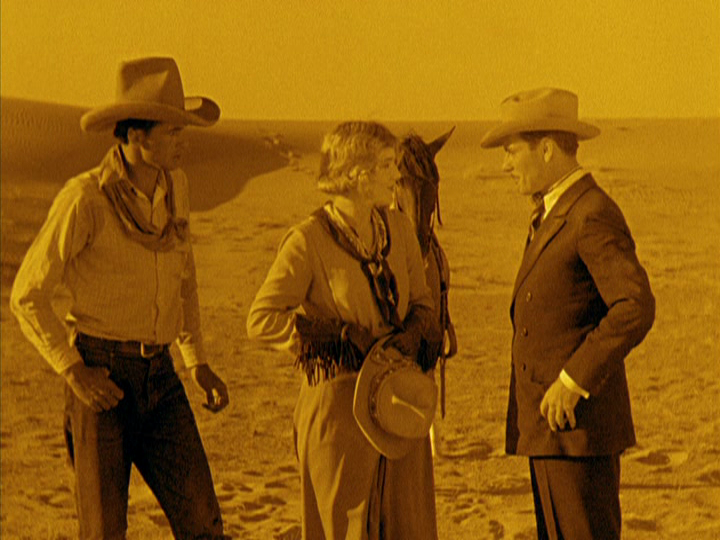 Though calling Barbara Worth an epic might be a bit of a stretch, Brownlow’s assessment would undoubtedly please Samuel Goldwyn:

Goldwyn also had loftier pretensions. In an interview with Grace Kingsley of the Los Angeles Times on June 18, 1926, he asserted that the success of  The Covered Wagon demonstrated the popular interest in films of more substance than the general run of western productions up to that time, “something educational if it is made entertaining,” as he put it.

“Barbara Worth will be a great epic,” he predicted. “It shows and proves what a great menace the desert can be without water, if not properly controlled by dams. In this picture will be shown an entire town swept away because of the faulty dam construction. The menace of the elements is a real life problem of everyday and 10 times more impressive to people than the menace of all the villains who every played in pictures.”

The above courtesy “The Story of the Making of The Winning of Barbara Worth” by Phillip I. Earl, published in 1988, which can be found here at the Harold Bell Wright web site, mirrored here at Silents Are Golden. The article is worth a gander, not only for its information but some really terrific behind-the-scenes photos of the production. 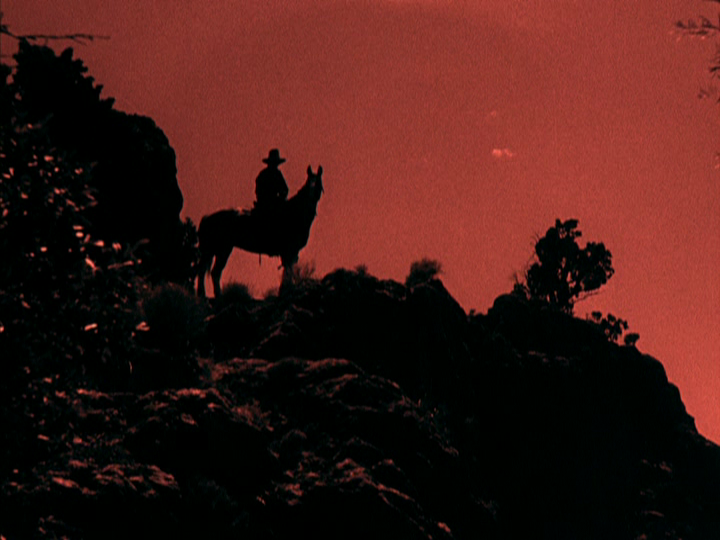 The Winning of Barbara Worth opens as a pioneer family struggle to make their way West. Death and sandstorms wipe the family out, save the adorable blonde daughter, who is found by a group of hearty men already settled in the area, working hard to bring water to the land. Jefferson Worth (Charles Lane), the leader of this group, adopts the little girl.

Many years later, the dreams of bringing water to the desert are nearly a reality. Barbara, now a lovely young woman, is wooed by handsome Abe Lee (Gary Cooper), son of one of the original pioneers. Enter Willard Holmes (Ronald Colman) and his father, city slickers with the money and know-how needed to finish the construction of the dam and reservoir. Willard is unimpressed with the idea of trying to turn the desert into a green, lush paradise, but he is immediately fascinated by Barbara and is happy to stick around. Meanwhile, his father starts scheming and plotting to screw the hard-working, long-time residents out of the dam and their land. 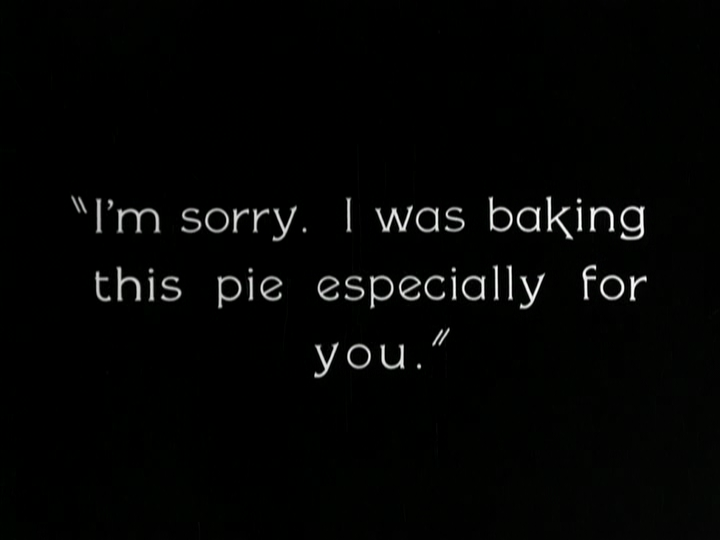 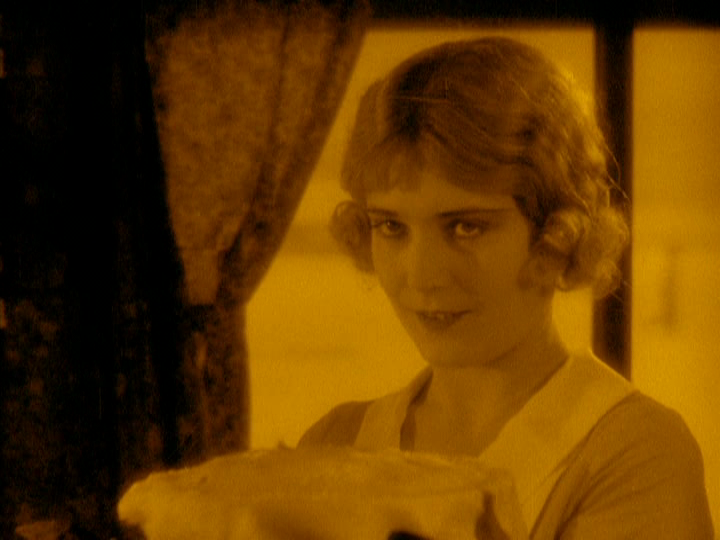 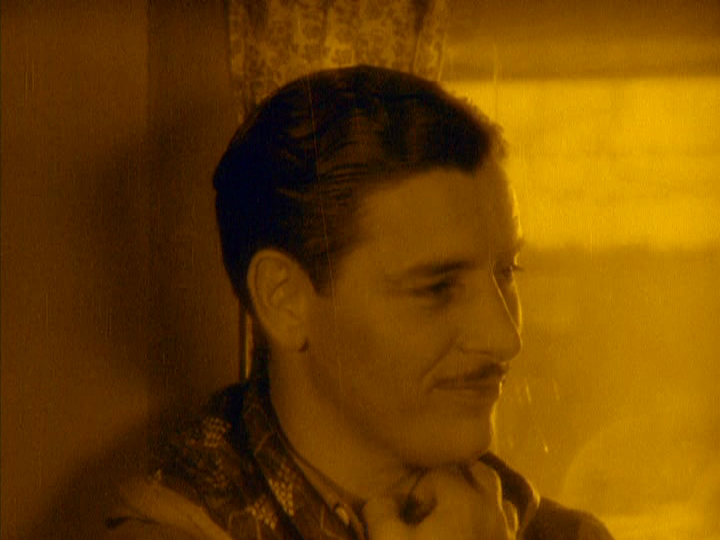 Ronald Colman gets a little hot under the collar.

Though Barbara Worth is a slightly more polished version of a standard silent drama, it’s also a fascinating look at a pivotal moment in film history. In 1926, the threat of sound was not yet fully realized, and Hollywood’s energies were still being poured entirely into creating silents. Technology had advanced to a point where these silent films were nearly always gorgeous to look at, and narratives were becoming far more sophisticated.

In a year, everything would change. Vilma Banky, so popular for the last few years of the silent era, would find herself unable to work because of a thick, unintelligible accent. The sturdy and handsome Ronald Colman would fare better, his distinguished voice made for sound, but his stiff and somewhat old-fashioned acting relegating him to a certain type of role. They were good roles, undoubtedly — he was nominated for three Academy Awards, winning one — but there were several years in the 1930s where his career floundered until he became of a certain age, opening up more possibilities for him. 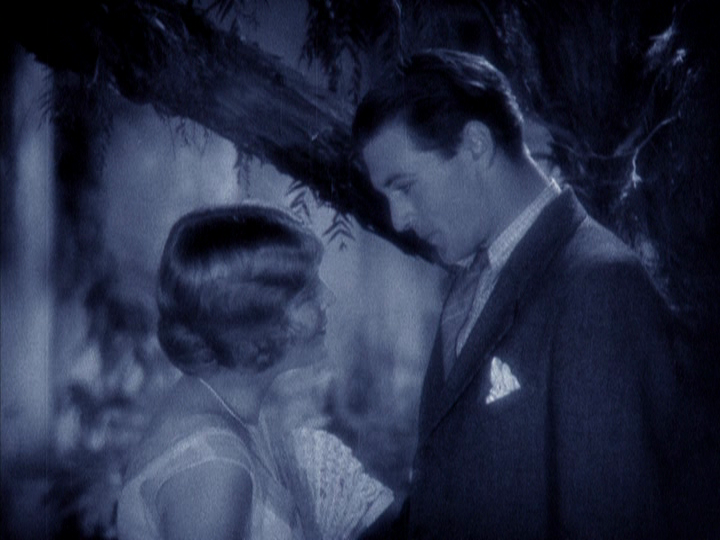 And then there’s the case of Gary Cooper, so new to the acting biz he was reportedly told by Goldwyn, “All you have to do is keep your eyes on Vilma Banky,” which he proceeded to do for the entire shoot, even when the cameras weren’t rolling. Yet his performance is strong, and contrasts with Colman’s so sharply that it’s impossible to see his scenes as anything but a hint of the future to come, a more natural and lighter acting style.

The Winning of Barbara Worth is lovely, entertaining and a key film of late-era silent cinema. Warner Archive has released The Winning of Barbara Worth on MOD DVD, using the same beautiful print that MGM used for their releases in the mid-2000s. The organ score is by Gaylord Carter, apparently from a live performance, with the audience chuckles and a few sound effects preserved. 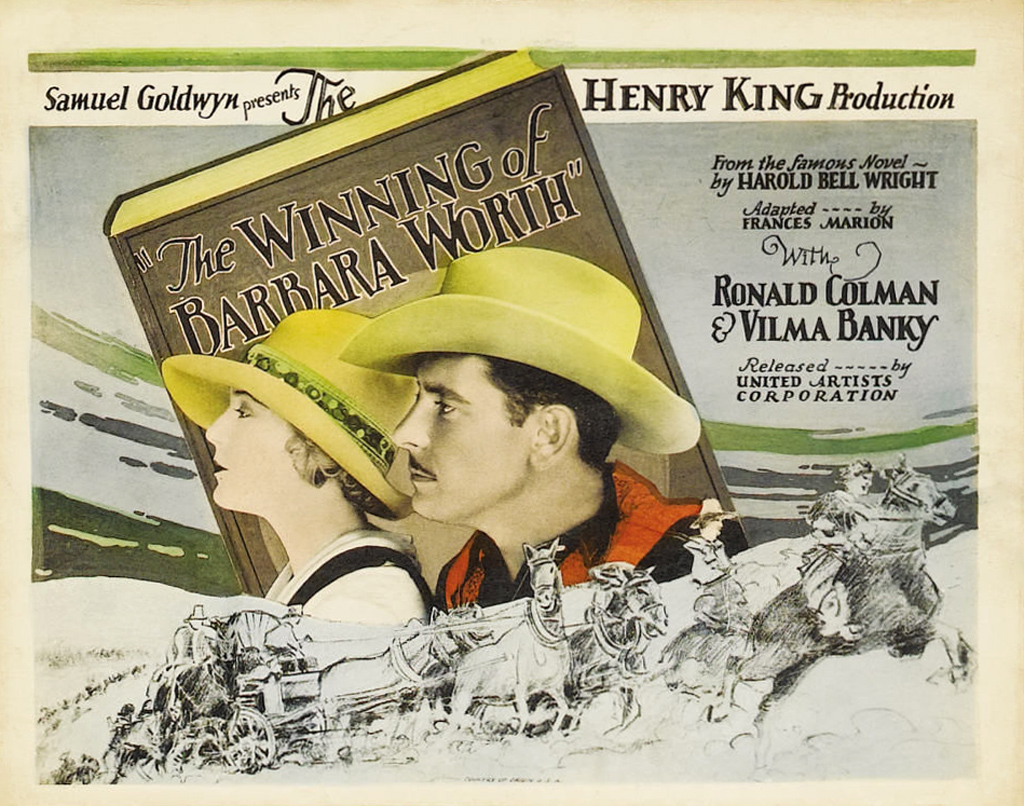 The Winning of Barbara Worth lobby card courtesy Doctor Macro.