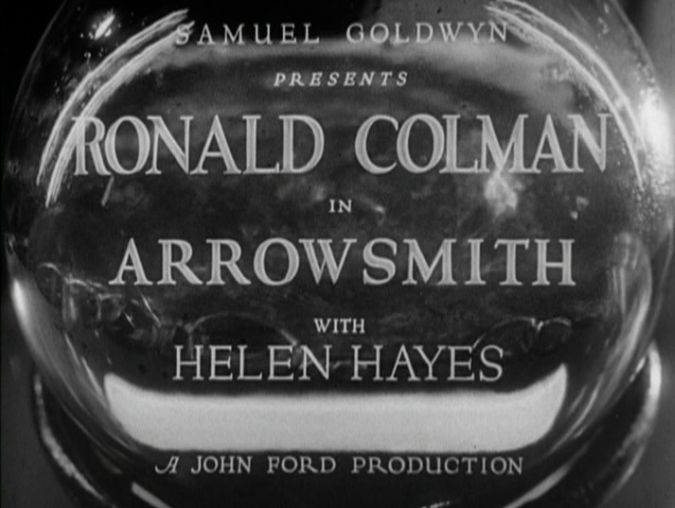 In 1931, producer Samuel Goldwyn was in a real bind. His film The Unholy Garden had been a complete disaster from start to finish, enraging Ronald Colman, Goldwyn Pictures’ star actor, who never quite got over having been contractually forced to appear in the film. A horrifying production, terrible reviews and even worse box office receipts plagued the film. As Goldwyn’s biographer A. Scott Berg put it, “The Unholy Garden would forever stand as the worst blot on the records of everyone involved with it.” It was that kind of bad movie.

When Goldwyn chose Sinclair Lewis’ award-winning novel Arrowsmith for Colman’s next film, he did so with nothing but good intentions and hopes of repairing both his and Colman’s reputations. In choosing Arrowsmith, however, he immediately (and surely inadvertently) saddled the film with it’s own reputation of, as Self-Styled Siren put it, being “dull Oscar-bait.” Where there is an award, there will be award bait, and it’s true that Arrowsmith fits that bill to an extent. 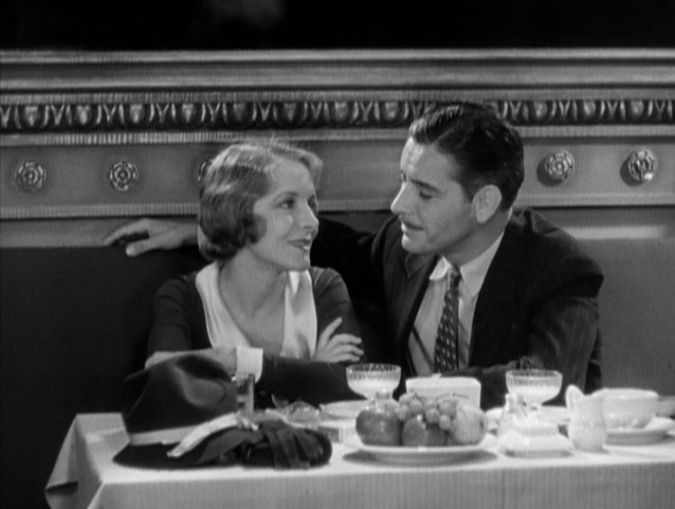 The biggest flaw of this cinematic adaptation — and perhaps the reason no studio producer was interested in the novel in the first place — is that paring the story down meant the little nuance Lewis’ novel possessed was lost in on-the-nose dialogue and visuals, with not a simile or metaphor to be found. As my beloved Mordaunt Hall said in the New York Times on Arrowsmith’s release:

This highly praiseworthy translation of the career of Martin Arrowsmith, M. D., may seem a trifle episodic here and there, and a little too much footage is given over to one or two harrowing happenings, but it shines in its characterizations and in the sane fashion in which the story, as a whole, has been handled. There as nothing intrusive, and, while there is much in the book that does not appear on the screen, that was to be expected in a film that runs for less than two hours.

And yet, despite all this, Arrowsmith is a charming film. Ronald Colman’s disinterested performance hints at something deeper within the half-heroic, half-selfish Martin Arrowsmith. For the first third of the film, Colman, who at almost 40 years old never quite looks the part of the 20-something medical school graduate, dithers about going into medical research, as has always been his dream. The first delay is due to his desire to marry Leora (Helen Hayes), and the second delay comes when Leora gets pregnant. To the film’s credit, the trope of women holding back their genius husbands almost never comes into play; in fact, Leora, formerly a nurse, encourages Martin to go after his dreams, and even prevents him from quitting altogether after he finally commits to science, yet two years of research has yielded what he thinks is very little progress. 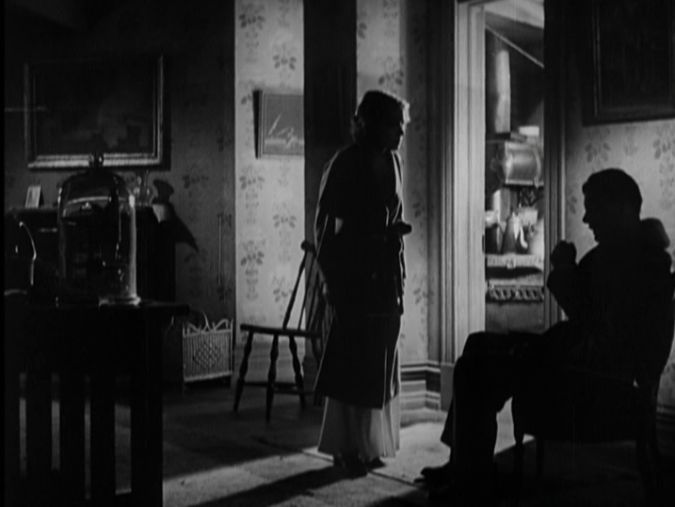 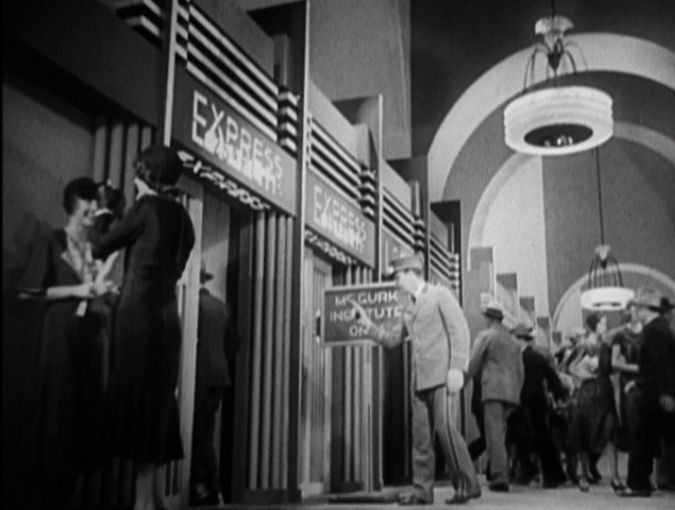 Cinematographer Ray June, responsible for such gorgeous films as Alibi (1929), The Bat Whispers (1930) and Roman Scandals (1933) gives Arrowsmith all of its style and much of its class. His work here is far better than the more pedestrian framing he often fell back on, such as in Mary Pickford’s Secrets (1933).

That night, thanks to Leora’s prompting, Martin buckles down and realizes he has indeed discovered something important, an antibiotic which might help treat the bubonic plague. Though disappointed when he finds a similar antibiotic had already been written up in a medical journal just weeks before his own discovery, Martin becomes the first doctor able to test the drug — an entire region of the West Indies has been ravaged by the plague. He travels to the West Indies and partners up with Dr. Oliver Marchand (Clarence Brooks), a character thought to be the first time an African American was portrayed without the stereotypical buffoonery or accent common to films of the day. While Brooks gives a good performance, it should be noted he is still corked up and Leora, progressive and sane for the entire rest of the movie, does a bizarre little double-take when she realizes Martin will be working with Oliver.

That said, Leora finds herself all but discarded when Martin finally gets into his research scientist groove, and the double-take could be read as her realizing the irony of having supported Martin, only to be left behind when he gets down to business. It’s worse than even she knows: Martin takes up — or at least we think he takes up — with local Englishwoman Joyce (Myrna Loy) stuck on the islands due to the quarantine. The scenes with Loy were reportedly mostly removed, and what little remains appears to have been restored at some time between the film’s original release and its current version. While I can’t find definitive proof of this, the film quality of most of Loy’s scenes is lesser, seemingly from a different print. 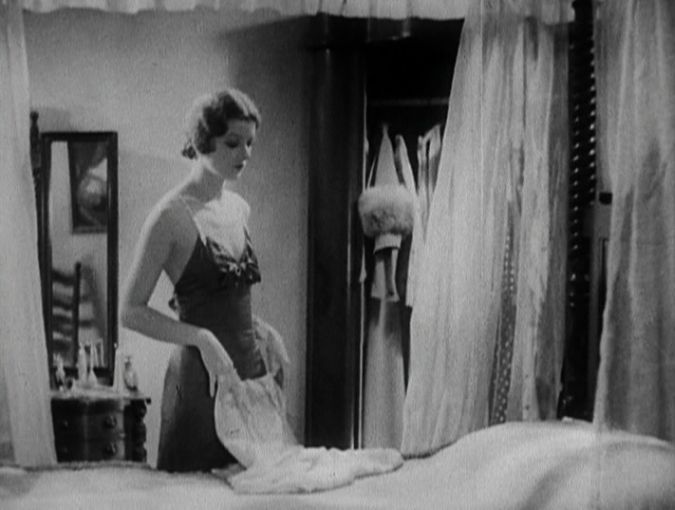 It’s been speculated that the scenes with Joyce were removed because of censorship, but in 1931, it’s difficult to believe that would be the case. Everything is so vague you can’t fault someone who misses the moment where she and Arrowsmith may have slept together; it could easily be read as the characters in their separate bedrooms, worrying about the plague and nothing more. Censorship in 1931 wouldn’t have required that much coding of an extramarital liason. What’s likely is that the subplot with Joyce was based on a second marriage mentioned in the novel but never even suggested in the film, and discarded as extraneous, a sensible idea as the cinematic Arrowsmith is meant to be less of a cad than the literary one, and his treatment of Joyce in the book is, at least at times, deplorable.

This was Helen Hayes’ second film, her first being The Sin of Madelon Claudet, which would win her an Oscar for Best Actress just in time for Arrowsmith’s release. Hayes is quite good in Arrowsmith, very natural and kind, with almost none of the drama school warbling and breast-grabbing actresses relied on in those early talkie days. In the scenes where Colman is barely keeping awake to say his lines, Hayes manages to play off his inattention, thus saving the film from becoming a dreadful bore.

Directed by John Ford just as he was coming into his own style, Arrowsmith is a very straightforward film. There is nothing extraneous, it’s all a very no-muss-no-fuss affair, something that host-historian Robert Osborne apparently revealed to have been due to Goldwyn’s insistence that Ford lay off the sauce while directing, giving Ford a reason to cut out scenes he didn’t feel were necessary.

Nominated for four Academy Awards, including Samuel Goldwyn’s first nomination for Best Production, Arrowsmith ultimately walked away empty-handed at the Oscar ceremony. In a year with tough competition, the comparatively tame Arrowsmith didn’t have much of a chance, but fans of early 1930s cinema will likely find the film far more entertaining than its reputation has allowed. For further reading, try Goatdog’s review, which can still be found here through the Internet Archive.

Arrowsmith is now out on MOD DVD from Warner Archive. The Warner webpage includes a three-minute preview snippet, featuring Ward Bond in an uncredited bit performance as a policeman.