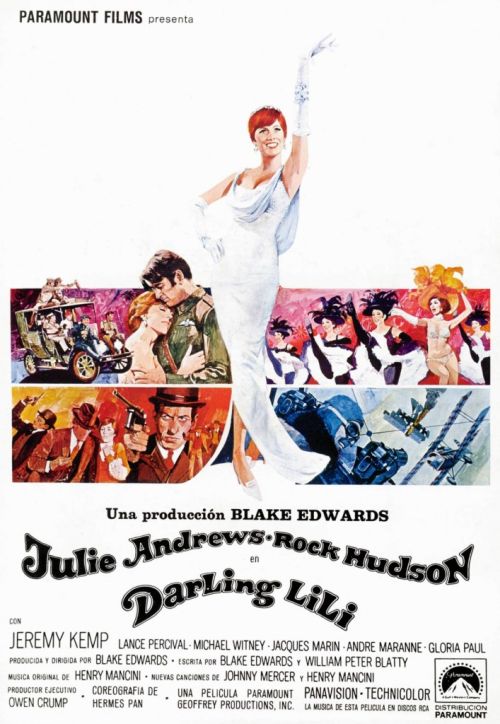 Lili Smith (Julie Andrews) is a beautiful and popular singer, living and performing in Paris during World War I. She is also a German spy, working with one Colonel Kurt Von Ruger (Jeremy Kemp), her lover and espionage coordinator. She’s given the job of seducing American pilot Major William Larrabee (Rock Hudson), and when she muses that he’ll at least be a pleasant change from all the old heads of state she’s been seducing thus far, she doesn’t realize how prescient she is. Larrabee pursues her from the moment he sees her, and she falls for him almost as quickly.

From there, Darling Lili (1970), the first film to pair Andrews with her director husband Blake Edwards turns into a silly romance, featuring the kind of relationship complications (and unnecessary bumbling French detectives) that Edwards was sadly known for. It’s not as though Edwards was so optimistic he couldn’t imagine a truly dysfunctional romance — S.O.B. (1981) and That’s Life! (1986) prove that — but he tended toward treating his wife with kid gloves, at least when it came to their film projects, and Darling Lili is the perfect example of that.

Not that Edwards didn’t learn a lesson on the filming of Darling Lili. It’s said that the production went so wrong that he harbored a grudge for years, eventually turning his experience into S.O.B., though he did embellish his woes with a few old Hollywood urban legends and a death or two.

Darling Lili, if it’s ever discussed today, is mentioned almost purely in financial terms. The film was way over budget and took nearly two years to release; by the time of its release in 1970, it looked terribly outdated, much like another 1970 musical, On a Clear Day You Can See Forever. That said, Charles Bulhdorn, the Gulf + Western chairman, suffered more than Edwards did. Not only responsible for Darling Lili and On a Clear Day, he had given the go-ahead to the 1969 musical fiasco Paint Your Wagon. By the time Darling Lili was released, Bluhdorn began to engage in some creative accounting to cover the copious financial losses, ultimately finding himself charged by the SEC for fraud. [1][2]

From a distance of a cool 45 years, however, Darling Lili, like a lot of films from the same era, doesn’t look so bad. It’s a beautiful film, with some fine aerial shots during the battle scenes, some truly fantastic costuming, and gorgeous sets and lighting, even if it does indulge in some of that flashy multi-colored style that was considered ultra hip back in the day. Andrews is in fine voice, and though she hardly breaks a sweat with the catchy and inoffensive tunes she’s given, she’s more than game for a little striptease act toward the end.

That said, as lightly as Darling Lili tries to tread on the subject of espionage, it’s a bit jarring to see Lili singing to comfort wounded troops, many of whom were surely maimed because of her own actions. She calms down an audience nervous about an aerial raid outside the theater, and you half wonder if she’s doing it to prevent civilians from reaching the safety of bunkers. But nothing of the sort is even entertained in Darling Lili, although critic Vincent Canby seemed to think otherwise; he considered the film somewhat “sardonic” and “perverse” at times.

The love story is the antithesis of edgy, too, though it’s unclear whether Edwards realized that or not. Smitten with Larrabee, Lili still provides secrets to Von Ruger; it’s in the revealing of one of these secrets that she learns the code name for one of Larrabee’s missions is actually the name of a stripper that Larrabee is entangled with. Comic misunderstandings and petulance ensues, and everyone, especially Hudson, is far too old to pull it off with any conviction.

Darling Lili flopped, of course. It wasn’t so much that the public wanted something edgier, but that the public was tired of the musical genre, full stop. That, the studio’s budget woes, their insistence on editing the film without Edwards’ input, and Edwards’ inability to see the film as anything but a “wedding present” for his wife, doomed this production from the start.

Again, though, in 2015, it’s so much easier to watch the film and forget that it was a few years out of date when it was released, and with that kind of cultural baggage out of the way, Darling Lili becomes much more fun, sometimes even delightful. Andrews is at the height of her beauty and charm in this film, and Hudson, though too old for the part, is surprisingly funny. The light romantic music of Johnny Mercer and Henry Mancini has made Darling Lili a favorite for musical theater fans, and for good reason.

And since 1991, the film has existed in a much more accurate cut, thanks to Blake Edwards being allowed to re-edit the film to his own specifications, correcting much of what the studio had done back in 1970. It’s this cut that is available on DVD once again, thanks to Warner Archive. The DVD comes with English 5.1 Surround Sound and English 2.0 Surround Sound, English subtitles, additional scenes and the trailer, and the film’s original four-minute overture has been restored.