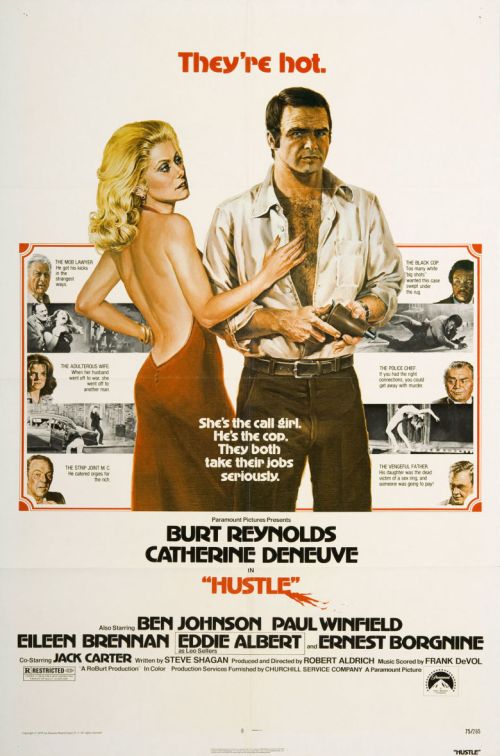 Legendary director Robert Aldrich had enjoyed success for nearly two decades when a series of flops, starting in the late 1960s and lasting through to the mid 1970s, almost ended his career. A surprise comeback with the critically acclaimed box-office hit The Longest Yard (1974) lead to a chance to do a more personal project: Hustle (1975). Working once again with Burt Reynolds, one of the biggest stars of the 1970s, Aldrich created a gritty and bleak neo-noir police thriller that divides critics and audiences to this day.

Following a week in the life of Lt. Phil Gaines (Reynolds) as he and his partner Sgt. Louis Belgrave (Paul Winfield) investigate the death of a young woman, Hustle portrays a Los Angeles even seedier and more corrupt than that of Aldrich’s classic Kiss Me Deadly (1955). The poor dead girl (whose corpse is played by sexploitation legend Colleen Brennan) was found on the beach, shot up with drugs and her every orifice, as the film reminds us repeatedly, full of semen. Gaines cares very little about the potential crime, their captain (Ernest Borgnine) even less, and when her parents (Ben Johnson and Eileen Brennan, no relation to Colleen) demand a little humanity from the police, there is none to be had.

But Belgrave has his doubts, and when he finds a photo of the girl with local mob boss Leo Sellers (Eddie Albert), he wants to investigate further. Gaines does not. He’s already tied up with problems at home, namely that his girlfriend Nicole (Catherine Deneuve) is top-shelf call girl, and he can no longer keep his jealousy in check. When the dead girl’s father goes on his own personal quest for revenge, Gaines is forced to care about the case, and learns some hard truths along the way.

To modern eyes, Hustle tries way too hard to be edgy. Several “fucks” and “motherfuckers” are crammed into the dialogue within the first few minutes, sounding unnatural and gratuitous. The constant talk of orifices sounds like one of Roger’s running gags on “American Dad,” and when someone calls semen “joy juice,” you’re going to laugh, though your laughter isn’t what the movie was going for.

Still, it’s all in the service of creating a gritty take on films noir and police dramas of earlier years, and Gaines is the modern (well, 1975) version of the old-fashioned and honorable antihero. He behaves in pretty much the same hard-boiled way so many private dicks did from the 1930s through the 1950s, but there’s just one problem: he’s a cop. There’s a strange disconnect when he rails against the establishment because — let’s be honest here — he is the establishment. This is played to some effect for a while, though after about the 27th time Gaines uses his authority to screw over the little guy, one can’t help but wonder why a film like Electra Glide in Blue was pilloried for being fascist[1] while Hustle received some solid reviews and made plenty of millions — it was the 17th highest grossing film in 1975 — enough to spawn copycat films for the next few years.

It doesn’t help that Gaines proclaims himself a fan of the good old days, including the movies and actors of his father’s generation, while complaining about things that even a casual fan of classic films would know were not new phenomena. Gaines has a little detour of a rant about defense attorneys getting criminal scum off on technicalities, for instance, claiming that the system didn’t used to be so corrupt, as though he’d never seen a film noir or a pre-Code with Warren William. Given that, in the world of Hustle, televisions in 1975 are apparently required by law to show old films 24/7, it’s astonishing that he has so little experience with films that engage in moral ambiguity.

This unexamined idolization of the past is a very strange thing for the lead character in film directed by Robert Aldrich of Kiss Me Deadly and The Big Knife to do, so strange that you think surely this is going somewhere. There will be an epiphany, or at the very least, Gaines will learn one of those neat, efficient little nihilistic truths, that things have always been this way, they will always be this way, and there is nothing you can do to change it.

But it never happens. If there is any kind of message in Hustle beyond a modest twisting of the generic 1970s police thriller, it’s so slight as to be invisible. David Thomson in Have You Seen…? considers the film to be an expression of Aldrich’s hopelessness, a repeated reassurance to all concerned that every human being is crooked, everyone is hustling, and the difference between good and evil is only a matter of degrees. Sure, that’s a nice reading, but it’s also the determined and sentimental opinion of a fan trying to explain the missteps of an otherwise celebrated auteur.

No matter how you look at it, there are two fatal flaws in this film: one, Gaines’ casual misunderstanding of the so-called good old days, which demands to be examined more thoroughly and, because it isn’t, feels like an oversight; and two, his wholly unearned redemption and subsequent (if metaphorical) halo acquisition by the time the movie wraps up.

Less fatal but still a head-scratcher is the idea that someone who looked like Burt Reynolds did in 1975 would be stuck at home, listening to his high-class hooker girlfriend have phone sex with clients. Equally confounding is how Nicole could end up in the phone sex biz anyway, considering her looks and implied talent; she’s gorgeous and a well-respected courtesan, yet she’s home a whole hell of a lot.

The relationship between her and Gaines is the exact kind of ludicrous Hollywoodism that films of the 1970s were supposed to be reacting against. And again, not to harp too much on a singular point, but if the idea of casting the duo was to create an aesthetic in Hustle that was a callback to the films of, say, Kay Francis and William Powell, then why wasn’t Gaines’ habit of referring to a sentimentalized, idealized past more fully fleshed out?

The answer, of course, is that no one was expected to look too closely at Gaines. He’s a glossy, airbrushed 8×10 of a Dirty Harry archetype, and had Hustle been a basic police thriller without pretensions to neo-noirdom, Reynolds would have walked away with the film. But Gaines was meant to be difficult and complicated, and when it came to stretching his talents, in 1975, Reynolds simply wasn’t up to the task.

Paul Winfield is fantastic as Gaines’ partner Sgt. Louis Belgrave, and there are some truly subversive things going on with his character that are well worth the price of admission. Deneuve gives a solid performance, mostly because even when she sleepwalks through something she’s terrific. Eddie Albert put in some great turns in the 1970s as skeevy dudes, and Hustle is probably one of his best of the era. Ben Johnson and Eileen Brennan both seem somehow underused, even though they have significant roles and carry most of the emotional heavy lifting. Also underused is Jack Carter, and Ernest Borgnine is in what really amounts to a glorified cameo.

Keep an eye out for Fred Willard, Catherine Bach, Robert Englund, Jason Wingreen, Naomi Stevens, James Hampton, David Spielberg, and a host of other well-known character actors. Lance “Brack” Fuller is somewhere in the film, though I wasn’t able to spot him, and Deanna Lund appears in a tiny role, too. A decade later, she would co-star in the Burt Reynolds movie Stick, though most of her part ended up on the cutting room floor. It seems her character was the cheating wife of a friend to Reynolds’ lead, and she slept with everyone, including Reynolds’ character. Worried, Reynolds demanded her character be cut out, so he’d seem more likable.[2]

Reviews for Hustle are mixed. They always have been mixed; they always will be mixed. Some see it as a fine entry in the 1970s neo noir genre, others see it as gratuitous, many feel it’s lesser Aldrich, but even those who hate the film can’t deny that the film is compelling, even if it’s in a train wreck kind of way.

Hustle is now out on MOD DVD from Warner Archive. The print has a really attractive mono soundtrack and it looks terrific, though there is one short segment where the original print has been replaced with what looks like a 16mm print (perhaps from a trailer?) blown up to 35mm, and in the wrong aspect ratio. The DVD includes English subtitles, and has Play and Scene Selection options.

–
[1] Director Magazine, Volume 26, 1973, page 555: “When James William Guercio’s first feature turned up at the Cannes Festival earlier this year, some critics raved about the stunning camerawork and hailed Electra Glide in Blue (London Pavilion) as a new look Easy Rider. Others, on the principle that any sympathy for the police must be misguided, claimed it as a Fascist tract.”
[2] Fantasy Femmes of Sixties Cinema by Tom Lisanti