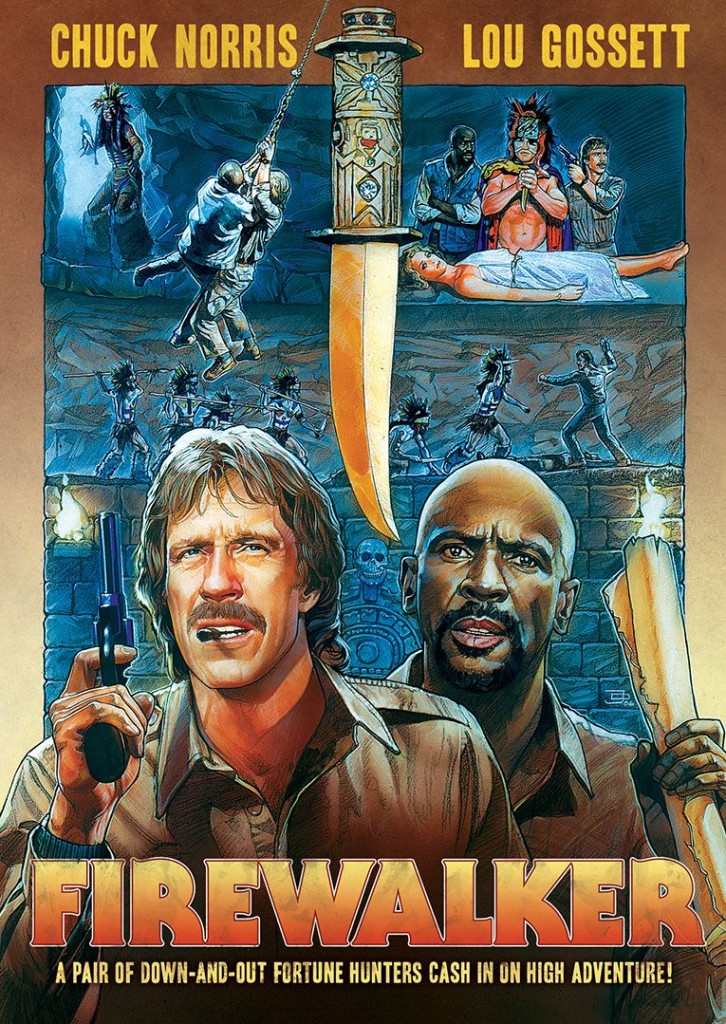 Everyone loves a good bad movie, but not every bad movie works as a late-night laugh-a-thon. As the crew of “Mystery Science Theater 3000” explained in Wired‘s oral history of the show, they couldn’t just pick any old bad movie to riff. The films couldn’t be “boring and really, really talky,” and they had to be up to a certain visual and audio standard; after all, there’s no use trying to watch a bad movie if you can’t actually watch that bad movie.

The same standards apply to those of us looking for just the right awful movie to watch for a fun night at home with friends and beer — or, for many of us, a fun night at home with Twitter and beer. Firewalker, a 1986 action-adventure flick that is astonishingly light on both action and adventure, seems like the perfect shlock to spend an evening with, but it just barely meets the minimum FDA guidelines for daily consumption of cheese. A knock-off of Indiana Jones and the Temple of Doom and Romancing the Stone, Firewalker is frequently cited as the primary reason its production company, the (in)famous Cannon Group, would declare bankruptcy just a few years later. However, Cannon’s best year was 1986 — not because of, but in spite of, Firewalker, which took in nearly $12 million at the box office over its first three weekends.

Chuck Norris is Max Donigan, a character with so little personality that one feels it’s a waste of good font to even try to describe him, but describe him we shall. Max is a reckless and slightly dim adventurer who likes to brag and shoot things, but he’s not good at either. His partner and best friend is Leo Porter, played by an embarrassed Lou Gossett, Jr. Gossett is actually quite good in the film, which, despite being stuffed with major character actors, falls apart any time he’s not around.

Leo is a former teacher who complains incessantly about Max’s shenanigans, which frequently lead to them being, you know, staked to the ground in the open desert. This time, they’re being tormented by The General, played by character great Richard Lee-Sung, who won my heart as one of the Kim Lucs in the classic “M*A*S*H” episode “Officer of the Day.” The General leaves our hapless duo in the hot sun as some indeterminate creepy-crawlies inch up Leo’s leg. That this scene happens entirely in long shot so that the creepy-crawlies can’t be seen has absolutely nothing to do with the fact that the film had no creepy-crawly budget whatsoever.

After escaping the bugs that didn’t exist, our duo manage to get back to Arizona, where beautiful Patricia Goodwin (an abysmal Melody Anderson) finds them in a bar and hires them to find a stash of gold she’s sure exists, even though she can’t prove it. She seems to have some kind of second sight, though Firewalker never really expands on this; she’s also meant to be very smart, and when searching for adventurers to help her, asks the bartender for guys who “aren’t too bright,” a line that we think will lead to something later, but it doesn’t. So the trio pack up their burros, bring along sidekick Willie (Alvaro Carcaño in the El Brendel role) for a few minutes, mosey out to a cave and find a big bright Crayola drawing of an Aztec something-or-other that Leo recognizes (because he’s a teacher, apparently, I guess, who knows) which proves the gold they’re searching for is real.

They talk to a local Native man (Will Sampson), head to somewhere in Central America, have a strange run-in with Max’s pal Corky (John Rhys-Davies), a brief tete-a-tete with Ian Abercrombie, and get into a bar fight with Miguel Fuentes, the awesome guy from Fitzcarraldo and the real hero of The Pumaman. The bad guy in all this is Sonny Landham as El Coyote, a nasty dude who skulks around in a big bright Crayola-colored cape of faux feathers, because Firewalker is, at heart, a movie for kids.

And no one ever, ever walks on fire.

All hard-to-find bad movies suffer from the same mild internet curse: reviews and articles make amazing claims about a film’s badness that, once the film becomes easily available, we sadly discover aren’t true. In the case of Firewalker, the legend — or anti-legend, really — that Max never shows any interest in Patricia because he’s “secretly” partnered with Leo are exaggerated. The reason Max never shows much interest is because Chuck Norris has zero range as an actor; the words are there, the blocking is there, but Chuck can’t pull it off. And the homoeroticism in the film is all planned. This is a Golan-Globus production, after all, and they knew from homoerotic.

But some of the legends are true, and it’s those unbelievable mistakes that make Firewalker worth watching. Yes, John Rhys-Davies tries to sound like a good ol’ boy from Texas. Yes, there is a character in an eye patch, and mid-movie, it changes sides. Yes, Chuck sports some action pants, this time in stylish khaki.

And those looking for Roger Ebert’s golden Tupperware will not be disappointed.

Firewalker has a few things going for it, things that, if someone sober had been at the helm, might have turned this into one of those rare, enjoyable B movies that came out of the 1980s. The only worth Firewalker really has, however, is as a campy, incompetent, late-night groaner of a film. But who can truly hate a film that inspired a professional, adult critic to submit his review in verse?

Firewalker is out April 21, 2015 (that’s today!) on Blu-ray from Olive Films. The video is quite good with a nice amount of grain retained in the print. The opening chase sequence suffers from that patchwork look you get with differing film stocks, some of which have gone a little pink, others which are almost all grain, but the remainder of the film is clean and crisp. The audio is a little off at times, with dialogue being difficult to hear. Still, if you want to get the biggest bang from your bad movie buck, you want to see a movie like this as closely to the way it would have been seen in the theaters. You want to see a character with paste-on scars that look like they’re going to fall off. You want to see Melody Anderson’s spiral perm change from scene to scene with the humidity. You want to see those seams on Chuck’s action khakis. This Blu-ray delivers what you want.