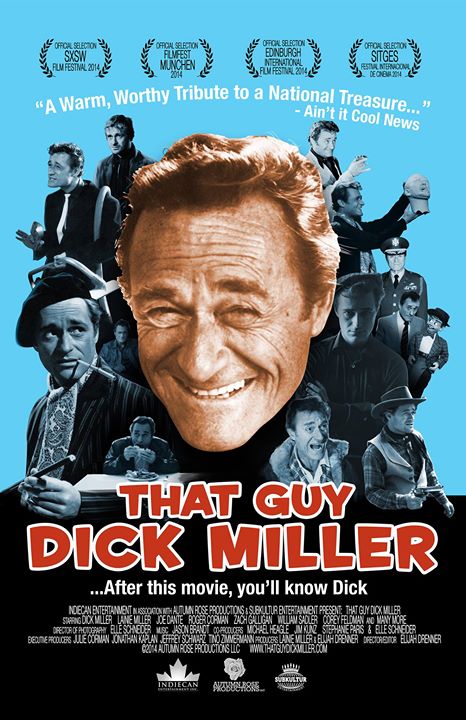 That Guy Dick Miller is an affectionate documentary that takes us through the life and career of, well, Dick Miller, the character actor who, for nearly six decades, has been playing the everyman everyone loves. His craggy face and fantastic voice are known to generations of filmgoers, even if many of the films he appeared in, especially early in his career, are so bad that, by all rights, no one should really remember them at all. But like so many other actors of the 1950s and 1960s, Miller managed to lend a realism, even occasionally a bit of gravitas, to roles that were less written than they were sketched on the backs of receipts. For that, Miller has earned himself a significant fandom, and rightly so.

That Guy is very much a documentary by friends for friends, but fortunately, Dick Miller is the perfect subject for this kind of film. He’s got more than just memories to share: he’s got scripts, props, and friends and colleagues who are still talking to him even after a frenetic 13-day shoot in the middle of summer with nothing but three pages of dialogue and a monster made out of papier-mâché. He’s got the wardrobe, too; you’ll never see a movie where Harrison Ford digs into his bedroom closet and brings out the Indiana Jones hat, but it’s a lot more fun to see Dick Miller’s famous pink jacket, hanging casually between his everyday clothes, anyway.

There’s much in That Guy that’s refreshing and honest, starting with his wife Lainie’s perceptive comment that, if Dick hadn’t been in all those Roger Corman films that the 1970s generation of indie filmmakers grew up on, Dick wouldn’t have had such a lengthy career. Joe Dante, Robert Forster and others lay down a few truth bombs of their own, primarily about how, in Hollywood, you don’t succeed because of your talent, but rather thanks to luck and who you know. Strangely, no one ever quite puts together that, as great as Miller is, those Hollywood politics they’re complaining about are what gave him a career.

Many consider Miller’s best role to be the hapless Walter Paisley in A Bucket of Blood (1959), but as what people occasionally refer to as a “utility actor,” Miller put in many great performances, especially in later films such as Heart Like a Wheel (1983) and Gremlins (1984). He’s a working actor, a job noble enough that more than a few big name Hollywood stars have referred to themselves as “just a working actor,” you know, to connect with the public.

But Miller doesn’t bother connecting with the public because he is the public, and there’s something about him that tells you that, even though he’s a screenwriter and science fiction author and one of the best known character actors in the country, he’s a regular guy, as the home movies featured in That Guy show. He’s also Hollywood, even if only on peripherally, and those home movies show that, too, with plenty of shots of this impossible-looking couple, Lainie with the kind of curves you only see in movies — and, indeed, you’ve seen her curves in The Graduate (1967) — him with the big barrel chest and tan that the camera loves, out enjoying the water and beaches and the kind of sunlight California is famous for.

Yet one can’t shake that there’s something missing in That Guy; namely, Dick Miller himself. His relatives, friends and colleagues do most of the talking, and they’re fun and fascinating, but it’s impersonal. The vast array of film clips used is impressive, but the film never lands on one clip long enough to illustrate how good Miller is in his particular niche. A few tantalizing tidbits hint at Miller’s seriousness and dedication to the twin crafts of acting and writing, but That Guy refuses to be anything but surface deep. And through it all, Dick himself seems to mostly shrug at the attention he’s getting, as though this documentary were just one more horror con to attend, but this time the fans have expensive a/v equipment, and also somehow got into his home.