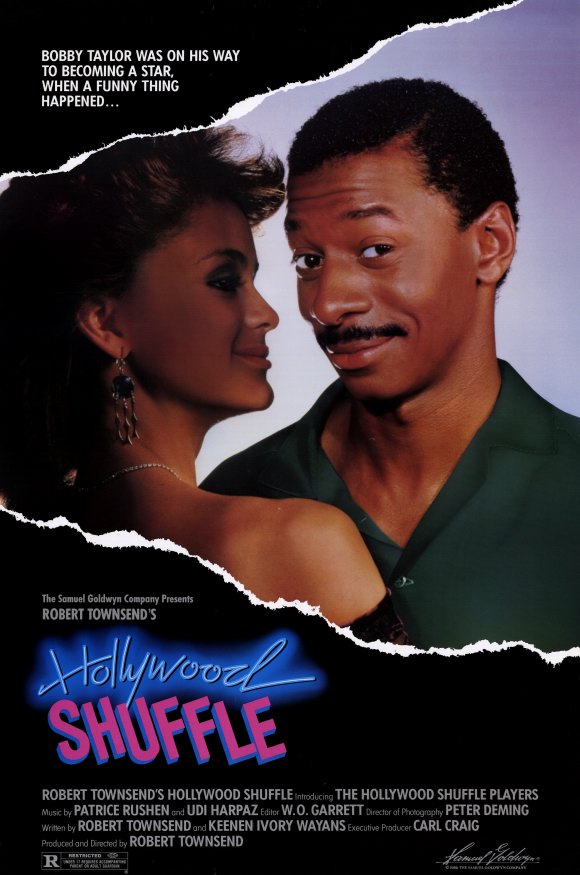 Sketch comedy films, the spiritual descendants of 1930s cinematic musical extravaganzas and 1960s television variety shows, hit their peak popularity in the 1970s. Monty Python’s And Now For Something Completely Different, Woody Allen’s Everything You Ever Wanted to Know About Sex, and the inaugural Zucker-Abrams-Zucker outing Kentucky Fried Movie captured the free-wheeling irreverence of the decade. But the genre didn’t die out with the ’70s; Amazon Women on the Moon and The Meaning of Life were two notable genre entries released in the 1980s.

Robert Townsend’s Hollywood Shuffle (1987) is perhaps one of the best of the sketch comedy films, featuring on-point social commentary, solid humor, and amazing production values for a film that reportedly cost less than $100,000 to make; further, your humble host would like to add that Hollywood Shuffle wins a lot of points for being a sketch comedy film that has a title that is not only perfect, but of reasonable length.

Actor and comedian Robert Townsend plays struggling thesp Bobby Taylor, a black man desperate to break into an industry that offers him only racist and demeaning roles. Living at home with three generations of his family — the Taylor house looks almost as though it’s in the same neighborhood as the Mildred Pierce home — Bobby knows his family needs him to get a big break, and soon. But the racist dialect of the scripts, the instructions to shuffle and roll his eyes, the directors’ pleas to “act more black” wear on Bobby, and he frequently drifts into reveries about the way he wished Hollywood worked.

It’s in these daydreams and spoofs of films and television shows that Hollywood Shuffle really comes into its own. The first of these sketches is a commercial for a black acting school, where black men are taught how to “walk black” and “talk black”… by white dudes, of course. Bobby’s grandmother, played by character great Helen Martin, enjoys watching “There’s a Bat in My House!” where the lead actor plays Batty Boy — half bat, half soul brother — while wearing a ridiculous costume. There are zombie pimps and Winky Dinky Hoe Cakes and a private detective called Sam Ace who likes to do the nasty.

Townsend managed the cost of film stock by asking for unused “leftover” film after other movies had finished shooting. (Note: All screen grabs from the DVD release.)

Townsend and his cast play multiple characters throughout, just as in any good sketch comedy, which is certainly thanks to the low budget and erratic filming schedule; Hollywood Shuffle reportedly took only 14 days to shoot, but those 14 days were scattered across more than three years. But this also has the happy effect of highlighting Hollywood’s lack of innovation, especially when one actor (Eugene Robert Glazer) plays the leading man in every summer blockbuster during the “Sneakin’ in the Movies” sketch.

But it’s also sadly still relevant. In a 1987 People interview, Townsend asks simply, “Why can’t I play roles that Sean Penn is playing?” In 2015, we’re still asking ourselves that question, and despite improvements in the roles offered to people of color, there are still undeniable problems… and still no good answer from the movie industry as to why.

Even those who have their hearts in the right place tend to fail when it comes to fully accepting the issues that people of color face in the movie industry. Critic Roger Ebert, who, it should be noted, is made fun of in this film, wrote in his 1987 review that many of the stereotypes Hollywood Shuffle features haven’t been used in “decades.” That said, I can’t think of a single example that supports his claim. Blackface, for instance, which sadly is still used in modern films on occasion, was a bit of a fad around the time Hollywood Shuffle was made (see: Silver Streak, Scorpio, Trading Places, and The Jazz Singer, a film Ebert famously savaged, and which co-starred Hollywood Shuffle actor Franklyn Ajaye). Beyond blackface, there were plenty of other racist films made within just a few years of Shuffle: Soul Man, White Dog, The Toy, and the what-were-they-thinking anti-masterpiece Mandingo, which Ebert himself called “racist trash.” He could not have truly thought that the film’s depictions of racism were outdated. 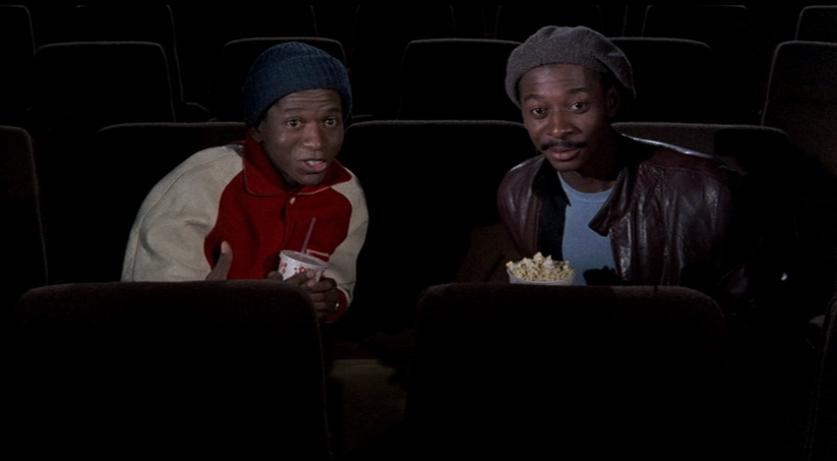 “Sneakin’ in the Movies” with Speed and Tyrone. They’re all, like, critics and shit.

Perhaps Ebert simply objected to the exaggeration of stereotypes, though that seems an odd thing to object to in a comedy. It’s more likely he, as all of us are at some point, was simply unaware of the full impact of our words. Hollywood Shuffle itself is certainly unaware at times; like all movies that are focused on one social issue, it frequently fails when addressing others. There’s plenty of sexism and several gay jokes and, in one astonishing scene, Bobby’s grandmother smiles with joy as she watches Latino actors being humiliated with racist dialogue and demands, but turns livid when the African-American actors are treated the same way.

It’s not that Hollywood Shuffle was trying to make a more advanced point about racism here, but that the film, simply put, wasn’t perfect. It could hardly have been, not with its shoestring budget and completely bonkers production schedule. It’s lack of perfection shouldn’t overshadow its legacy, however. What’s impressive about Hollywood Shuffle is not its failures but its successes, the still-relevant social commentary, the hilarious comedy, the solid writing and the impressive filmmaking.

Olive Films releases Hollywood Shuffle on Blu-ray and DVD today. For those revisiting this under-appreciated gem, a fantastic interview with Robert Townsend from 2014 can be found here.