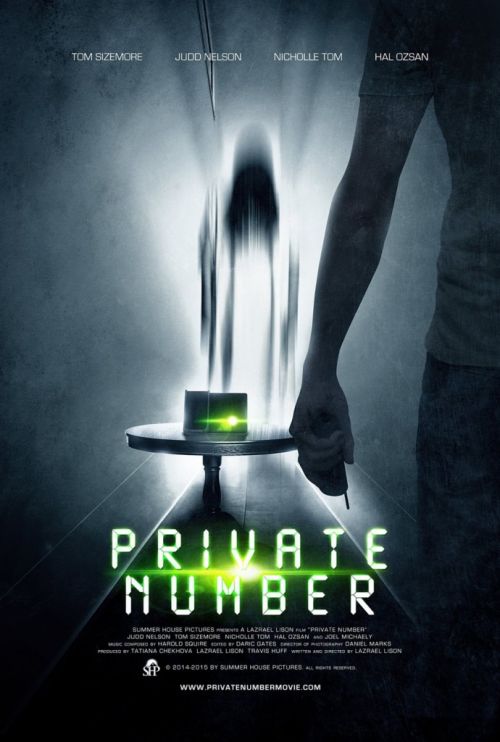 Thirty-somethings Michael and Katherine Lane are, on the surface, a perfectly normal couple. Michael (Hal Ozsan) is a writer of fantasy fiction with one moderate seller under his belt, Katherine (Nicholle Tom) runs a small boutique, and they fight about the usual things: having kids, their dull friends, and how long it takes them to get ready to go out. Michael’s troubled past seems to be behind him, thanks to no-nonsense AA sponsor Jeff (Tom Sizemore) and Katherine’s steadying influence, but when Michael struggles with writer’s block and cracks in their relationship start to appear, Katherine realizes Michael is hiding, at least a little, behind a façade. Before either of them can process the situation, though, they start receiving a series of unnerving, late-night prank phone calls. Only Michael gets these calls, however, all from an unlisted number, and from a variety of people who say just one thing: “Remember me?”

Private Number (2014), the latest from LazRael Lison, seems at first to be your standard indie horror flick, up to and including a main character who one suspects is a bit of a stand-in for the screenwriter. But just when the film really settles into focusing on the identity of the callers, the strangest thing happens: a knight in full plate mail appears in Michael’s office. He’s the product of a hallucination, surely the result of Michael’s tenuous sobriety and his struggle with writing a sequel to his epic fantasy novel Knight’s Fire, but the knight seems entirely unrelated to the sinister phone calls, which are briefly forgotten in favor of this new development.

This is just one of many sharp right turns Private Number takes during its tight 95-minute runtime. It’s a playful and audacious film, one that turns some popular genre tropes upside down, while laying other tropes on so thick it’s frankly shocking. Much of the aesthetic early in the film is borrowed straight from “Breaking Bad,” for instance, with a score by Harold Squire meant to mimic Bernard Herrmann, but the real meat of the film has nothing to do with either Vince Gillian’s television show or Alfred Hitchcock’s films. Eddie Murphy famously joked about white folks staying in haunted houses longer than is generally advisable; in Private Number, Michael and Katherine take several days before they even consider unplugging their phone. The shifty-eyed Jeff, an almost-stalker neighbor named Mitch (Kyle T. Heffner), and uber-asshole Sheriff Stance (Judd Nelson) are red herrings so obvious that it’s certain the film doesn’t expect you to be distracted by them at all.

Private Number effortlessly flits between the horror and mystery-thriller genres, doing so at unexpected and exciting moments, shaking you up like your first time on that really great carnival ride. Thought light on gore, the film has plenty of jump-in-your seat moments, plus the requisite tangle of clues that are the hallmark of any good mystery. After a while, Michael’s book is forgotten, and so is his wife, and you’re never quite sure why. When the ghosts of those who are presumed to have been calling Michael arrive, however, the situation becomes more clear. Where it all ends up is hardly surprising, but the film’s commitment to the finale is admirable, and eminently watchable.