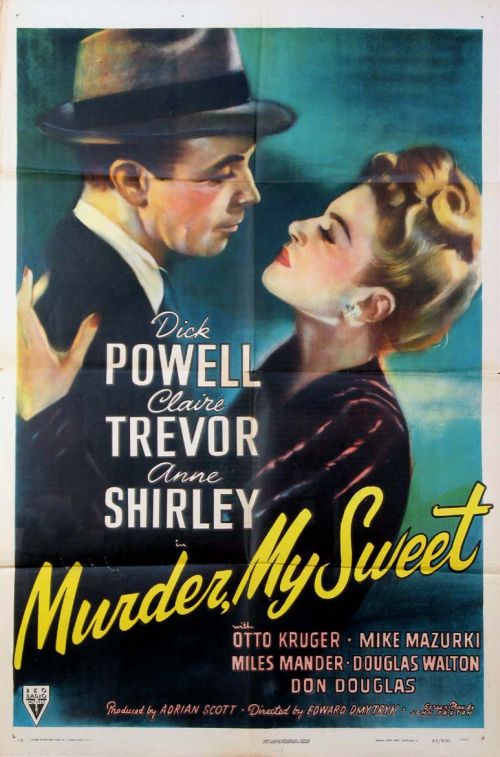 Dick Powell was understandably nervous about taking the role of Philip Marlowe in the now-classic film noir Murder, My Sweet (1944). Having enjoyed a long career as the “juvenile” lead in musicals, the hard-bitten private dick Philip Marlowe was one hell of a long way away from the boy singers Powell had played in lighter fare like Star Spangled Rhythm and the Gold Digger series. RKO was keenly aware of the risk, too; in fact, they made sure to stay away from the source novel’s original title, Farewell, My Lovely, worrying that audiences might mistake a Powell film with that title as a romance.

Arguably the first film to feature a full-fledged noir aesthetic — shadows, voiceover, flashback, sinister angles, femmes fatales and a world out of control — Murder, My Sweet follows Marlowe as he tackles two cases: the search for a little dancer named Velma that the recently sprung Moose Malloy (Mike Mazurki) is hoping to reconnect with, and a second case involving the sexy Helen Grayle (Claire Trevor) and her stolen jewels. Grayle’s young stepdaughter Ann (Anne Shirley) thinks Helen is trying to pull a fast one on her older, infirm husband (Miles Mander), and when one of Helen’s friends ends up murdered, Marlowe starts to think she might be right.

Powell had developed a somewhat sarcastic nature as part of his younger on-screen persona, something he usually reserved for the wackier scenarios that inevitably cropped up in the third acts of his films. This sarcasm, slightly tweaked, turned out to be a pitch-perfect take on the weary, embittered Philip Marlowe. If Murder, My Sweet was a mostly faithful adaptation of the book, Powell’s Marlowe was slightly more genial, more law-abiding, and a little doughier than the private dick in the novel.

That’s not to say that he was ineffectual, because his Marlowe became the gold standard by which future Marlowes would be measured, even if Powell’s influence is often overlooked. But one can’t watch James Garner, Robert Mitchum, or even Elliott Gould without thinking of Powell, and Raymond Chandler, the author of Farewell, My Lovely always said he was pleased with Powell’s performance. There are other performances to watch for in Murder, My Sweet, too, namely Mazurki and Trevor, with Esther Howard putting in an incredible turn as the boozy Jessie Florian.

When Murder, My Sweet opens, Marlowe is already in police custody, bandaged and worse for wear, just about to recount the whole story of the missing Velma and the missing jewels. This wounded and blindfolded Marlowe is both ironic — he’s a private eye who cannot see — and metaphorical, a scraggly, unkempt Justice at the mercy of hostile police officers who care less about finding criminals than they do with busting Marlowe’s balls. The reasons behind their hostility are never fully explained; this ambiguity that hints at a rich and disturbing backstory between Marlowe and the police force, especially Lieutenant Randall (Donald Douglas), is one of the most noir-ish elements of the film, as well as one of the most disturbing.

In Murder, My Sweet, our Marlowe is a mostly okay guy, thoroughly human and fallible and approachable, if a little sarcastic and prone to stretching the law here and there. But what he goes through in Murder, My Sweet is truly upsetting. It’s a world out of order, a fractured reality that can never be perceived as a whole but only in pieces. It’s questionable whether Marlowe understood this about the world prior to Moose Malloy wandering into his office, looking for his long lost Velma. It’s certain that Marlowe knows it after everything has rather predictably blown up, however, and those injuries we see him with in the opening scenes have mercifully left him, even if only temporarily, unable to see the hellscape that his world has become over the last several days.

Murder, My Sweet wasn’t the first time Chandler’s Farewell, My Lovely made it to the big screen. The story makes its first appearance in one of the George Sanders Falcon movies, The Falcon Takes Over (1942). There is no Marlowe, of course, only The Falcon, with a ridiculous and heavily padded Ward Bond passing as the outsized bruiser Moose Malloy, a strangely dull Anne Revere as Jessie Florian, and the bland Helen Gilbert as the film’s version of Helen. It’s not a bad programmer, really, but the story feels rushed, even if you aren’t familiar with Chandler’s novel or the Dmytryk film of two years later. Yours truly can speak with authority on this; I saw the Falcon film before I read Farewell, My Lovely or saw Murder, My Sweet. To make things even weirder, I saw the Robert Mitchum Farewell, My Lovely next, then read the novel, then saw Murder, My Sweet. Life is strange.

Incidentally, Chandler didn’t get paid for Murder, My Sweet, technically speaking. He had earned $2,000 for the rights when the story was used in the Falcon film, and now that RKO was apparently looking to score a Maltese Falcon-like hit with an adaptation of a hard-boiled detective story, Chandler was due nothing; the studio had already paid. He didn’t get a chance to work on the film, either, having signed with Paramount in 1943. But he couldn’t have been too upset: his Paramount salary was $1,250 per week, his debut screenplay for that studio was Double Indemnity, and he reportedly approved of the casting of Powell as his Marlowe. [1][3]

Just a few years later, director Edward Dmytryk and producer Adrian Scott would find themselves in front of the House Un-American Activities Committee. Both ultimately became part of the Hollywood 10, refusing to testify on the grounds that being questioned about their alleged membership in the Communist Party was unconstitutional. Scott found himself in the biggest trouble, losing his wife Anne Shirley, who played Ann in the film. She never admitted that she divorced Scott because of his blacklisting, though she became well known in Hollywood as a politically conservative hostess who hob-knobbed with many of the town’s movers and shakers. Scott was blacklisted and found only sporadic work under a pseudonym, largely due to Dmytryk later recanting his Communist affiliations and telling HUAC that Scott had forced him to include “Communist propaganda” in his films.[2]

If there’s “Communist propaganda” in Murder, My Sweet, it’s so oblique as to be invisible. There is no class struggle, no concern for the working class, and no scathing critique of the bourgeoisie. There are no heroes; no one is truly good, and everyone is floundering in the same rotten, stinking world as everyone else.

Murder, My Sweet has been released in a stunning MOD Blu-ray print by Warner Archive. Blu-ray.com has some screen grabs and tech spex here, along with a short review

Murder, My Sweet is frequently considered to be second-tier film noir (when it’s not being forgotten entirely), and that’s a shame, as it’s a fine example of the film noir cycle. Influential and entertaining, this psychological thriller is a must-see for classic film fans.