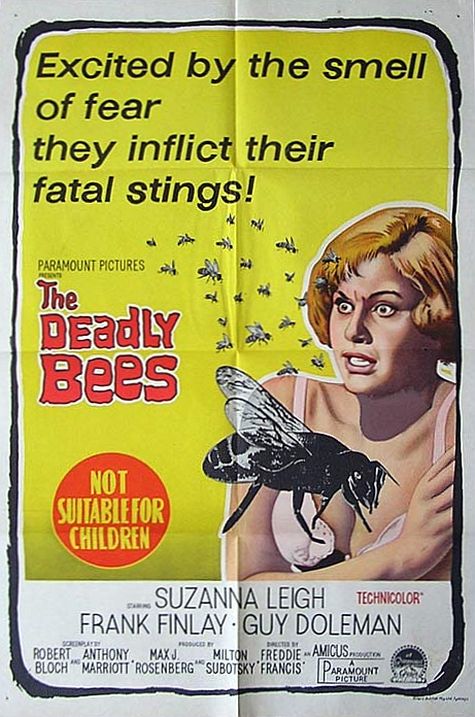 When pop chanteuse Vicki Robbins (the lovely Suzanna Leigh) collapses from exhaustion — actual exhaustion, not the euphemistic kind that pop stars are usually known for — her doctor prescribes a few weeks of rest. He suggests she visits an old friend of his, Ralph Hargrove (Guy Doleman), at his farm on Seagull Island. Hargrove’s place is nice and rustic but hardly quiet; Ralph raises noisy, noisy bees, for a start, and his wife Mary (Catherine Finn) loathes Ralph, a real cold fish of a husband, and he loathes her right back. Also, there are some killer bees on the loose, and they start to, well, kill things. Local beekeeper H.W. Manfred (Frank Finlay) suspects Ralph of breeding killer bees in the midst of his polite little honey bees, hoping to do away with his wife in an accident. As Vicki investigates into the life of her rude host, she starts to believe Manfred’s theory.

The best moments of The Deadly Bees (1966), the confused and tepid British horror flick, come when Ralph and Mary hurl barbs at each other a la Who’s Afraid of Virginia Woolf, only with less booze and fewer swears. Mary, made up to look as ugly as possible, is actually a very sympathetic character, and Ralph is just… well, he’s just so damn Ralph. Unappealing and cold, it’s easy to see why the dotty and harmless old Manfred thinks he’s up to something sinister. But this is a cheap B movie (pun most certainly intentional) and so things are never as they seem.

The Deadly Bees is the first of what could very well be the tiniest of all the horror film subgenres: the bee movie. Made in 1966, it’s often credited as the first bee-themed horror flick, but it’s equivocal whether it really inspired next bee movie, The Killer Bees (1974), or not. It’s far more likely that The Killer Bees was inspired by actual killer bee concerns that started in the 1950s and resurfaced in some panicky (but thoroughly 1970s) news stories promising that some escaped killer bees would be here at any second, and we must all freak the fuck out, because we were all sure to die.

The animal- and nature-themed horror movies so in vogue in the early 1970s certainly helped the trend along, and after The Killer Bees came The Savage Bees (1976), as well as The Swarm and The Bees (both 1978). By the mid 1970s, one could say that killer bees had become a little cultural cottage industry, one that’s mostly forgotten today, save the films and the Killer Bees sketches on “Saturday Night Live.” This article’s title, in fact, comes from the October 18, 1975 episode where host Paul Simon tells a surprised cast that the bees number won’t be performed that night. Three years later, Simon would return to SNL with Charles Grodin, where a fantastic Killer Bees sketch finds a confused Grodin trying to come to terms with the entire concept of the Bees. “I don’t know how to relate to the whole bee thing!”

Hilariously, The Deadly Bees doesn’t really know how to relate to the whole bee thing, either. Rather than being ahead of its time, The Deadly Bees seems to simply be a response to Alfred Hitchcock’s The Birds (1963) — at some point, a producer surely read H. F. Heard’s source novel, thought, “Hey, what comes after birds? Bees!” and ran with that baby. The film goes so far as to borrow technical tricks and plot points from Hitchcock’s film, as well as cast and crew: Robert Bloch (writer, Psycho), Guy Doleman (actor, Dial M for Murder) and John Harvey (actor, Stage Fright).

It goes further than that, unfortunately. There are references to birds everywhere, from Seagull Island to the inclusion of the pop group The Birds, featuring a young but very recognizable Ronnie Wood. In the States, The Deadly Bees was on a double bill with The Vulture (“Talons of Terror!”), a Robert Hutton vehicle (!) starring Akim Tamiroff and Broderick Crawford, both desperately just trying to pay the bills. It’s much worse than The Deadly Bees but, not surprisingly, as heavily influenced by The Birds as The Deadly Bees was. 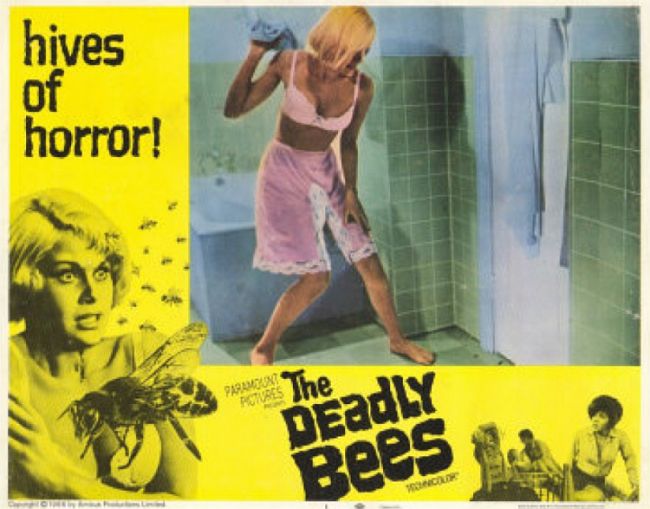 Suzanna Leigh is really quite nice as the beauty against all these sting-happy beasts. Leigh is one of my favorite lesser-known actresses, as long-time readers may remember, in part because she’s endured such cinematic tragedies as Lust for a Vampire and Boeing, Boeing, and, well, this. She’s a real trooper in this film, and had nothing but good things to say about filming, but mentions that, even though she escaped harm, many on the crew and in the cast were stung by bees.[1] It’s a little difficult to believe, because nearly every shot of a human being near bees involves front projection, fake plastic bees (that look like flies, really), or subtle (and not-so-subtle) editing to make it look as though someone were in the same room with the bees when they were not. In fact, the one scene with obviously human hands (in some solid, state-of-the-art protective gear) holding bees is reused repeatedly, as though that were the only footage of human-bee interaction the film had at its disposal.

The Deadly Bees was featured on MST3K and, as such, is mostly known as one of the hundreds of “worst films ever” according to people who don’t realize that MST3K is not the sole criterion by which “worst film” should be measured. It’s very much a bad film, but it’s also entertaining, with some good elements that are reminiscent of Abominable Dr. Phibes and Quatermass and the Pit, and some campy bits that almost look like they were stolen from gialli and toned down with a nice, soothing layer of gray.

There’s a charm to this film, despite its poor special effects, scenes out of order and plot points that not only make no sense but actively upset the film’s already tenuous continuity. Leigh is a fun actress, Finlay is doing a solid job here for once — there’s no scene stealing here, unlike his pitiful performance in Count Dracula (1977) — and Guy Doleman really sells the despair of a man who is just done with everything, all the time, why did I even get out of bed this morning, I mean really.

Olive Films has released The Deadly Bees on a Blu-ray that looks absolutely terrific. It’s a bare-bones release with just PLAY and SCENES options. There are some good screen grabs and tech spex over at DVD Beaver, which also has some snippets of contemporaneous reviews.

–
[1] I Was a Monster Movie Maker: Conversations with 22 SF and Horror Filmmakers, by Tom Weaver
[2] A Year of Fear: A Day-by-Day Guide to 366 Horror Films, by Bryan Senn
Poster via Coming Attractions of the Past