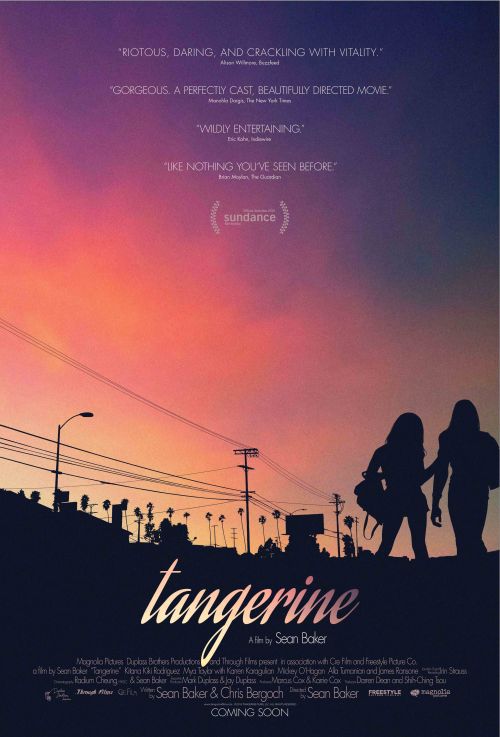 It’s Christmas Eve in Los Angeles, and Sin-Dee (Kitana Kiki Rodriguez), fresh off a 30-day stint in the slammer, catches up on the local gossip with her good friend Alexandra (Mya Taylor). Unfortunately, Alexandra lets slip that Sin-Dee’s boyfriend-slash-pimp Chester (James Ransone) has been stepping out on her, which launches Sin-Dee on an unstoppable quest to find this girl named Dinah (Mickey O’Hagan) and drag her ass back to Chester for an epic confrontation.

The genuine camaraderie between Alexandra and Sin-Dee, both trans women, is obvious from the opening seconds of Tangerine, the latest from indie writer-director Sean Baker, a raunchy and delightful slice of urban life that wowed audiences at Sundance earlier this year. But nestled in between the charming opening scene as the broke working girls share a donut for breakfast — as far as we know, the only food they ever have in the film, despite constant walking and most of their day spent in local bars and restaurants — are hints of exploitation. Tangerine in those few moments feels less like it’s immersing itself into the characters’ story than showing off the urban subculture for a presumably Middle American audience. After that rough first few minutes, though, the film finds its footing, and when it does, it becomes clear that the unfortunate tropes of the opening were clumsiness rather than malevolence.

As Sin-Dee rampages through downtown L.A. looking for Dinah, Alexandra walks for miles, passing out fliers for her Christmas Eve performance at a local bar. Meanwhile, cab driver Razmik (Karren Karagulian), in what is at first an unrelated subplot, carts a variety of characters around the city. His passengers include a hilarious (and semi-autobiographical) turn by Clu Gulager as a Cherokee man named Miah, and an equally funny, though disgusting, cameo by Josh Sussman as a character credited only as Retch Chunder — you can surely guess why.

Filmed on an iPhone rigged with anamorphic adapter lenses and mounted on Steadicams, Tangerine has the unmistakable look of cinema vérité, though retains a visually smooth cinematic feel. The cinematography on the escalators and stairways early in Sin-Dee’s hunt for Dinah is astonishing in composition and fluidity, and the saturated colors throughout are beautiful.

The performances are uniformly terrific, especially from newcomers Rodriguez and Taylor, whose witty and bitchy observations are highlights of the film. Karagulian also puts in a stellar turn as Razmik, star of the film’s secondary plot line. Ramzik turns out to be more than just a cab driver: he’s one of Alexandra’s best customers and a friend, who just happens to be harboring a crush on Sin-Dee. He’s also married to a ciswoman who has no idea of his extracurricular activities, and in true Shakespearean fashion, his complicated love life collides with Sin-Dee’s, though this showdown doesn’t occur at a 17th century palace court but rather a 24-hour donut shop on the eve of 2015.

Tangerine is laugh-out-loud funny, sincere and lovely and perverse all at once. At times it’s reminiscent of 1970s sex farces where subcultures are both celebrated and fetishized, and just like those ’70s indies, it’s peppered with gritty and hilarious moments of social commentary. The film’s only flaw are the occasional missteps in the finale, notes hit a little too hard, morals a little too pat, conclusions drawn that are just a little too clean. That’s not a fatal flaw in a comedy, however, and at heart, Tangerine is a female buddy comedy, raunchy and touching and hopeful in a difficult world.