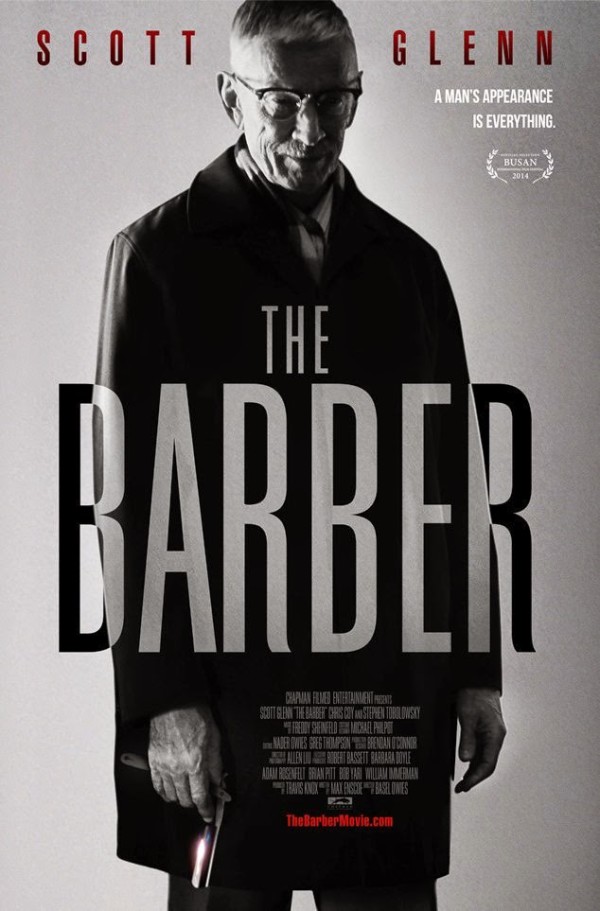 It was almost twenty years ago when serial killer Francis Allen Visser, a middle-aged man with a penchant for burying his young, female victims alive, was released from prison, thanks to the many mistakes the cop who had doggedly pursued him made on the case. With his failure all over the network news and his obsession beyond his reach, the police officer kills himself, leaving a young son behind. Two decades later, 30-something John McCormack (Chris Coy) comes rolling into a small Northwestern town, looking for Visser. He stalks a kindly old barber named Eugene Van Wingerdt (Scott Glenn), sure that this is Visser with a new name and a new life, and shows the elderly man his own recent kill. “I’m your biggest fan,” John tells him, and demands Eugene teach him the finer points of murder.

The Barber (2014) is a fresh-looking if somewhat typical thriller, with some fine acting from the well-chosen cast. But the film also features multiple missteps, such as plot holes and the curious way no one in this small town ever sees any of the suspicious behavior going on right out in public. Similarly, the timeline, which was so carefully cultivated early in the film, goes completely haywire during the run-up to the finale. After establishing past events as occurring in the 1990s, The Barber, like so many other films, retreats to the 1970s as the default for its flashback aesthetic. This incorrect dating of an old Polaroid and a bittersweet tale are simple continuity errors, but errors that affect such a significant chunk of plot that one starts to wonder if there’s a clever twist coming. Don’t worry: there isn’t.

The real attraction of The Barber is in the performances. While Scott Glenn puts in a trademark solid turn as Eugene, deftly maneuvering through a script that sometimes falters and able to sell the ambiguity so necessary for The Barber to work, the real stand-out is Stephen Tobolowsky in a relatively small supporting role. It’s not the first time Tobolowsky has played an asshole, and Lord knows it won’t be the last, but the duplicity and viciousness on display in his performance is tremendous. When Glenn and Tobolowsky share a scene, the film is at its undeniable best.

The supporting cast is equally impressive, with Olivia Dudley in a small but pivotal role, and Max Arciniega — you’ll recognize him as Krazy-8 from “Breaking Bad” — both proving the adage that there are no small roles, only small actors. Also of note is the fine cinematography by Allen Liu, who manages to freshen the typical thriller look by mixing modern techniques with older styles; some shots are framed like a hybrid of Nightcrawler (2014) and The French Connection (1971), to great effect, while the Norman Rockwell lighting at the Thanksgiving dinner scene underplays the crazy to absolute perfection.

Though not a strict remake of the Malcolm McDowell movie of the same name, Basel Owies’ The Barber shares enough similarities with the 2002 film that a few eyebrows are sure to raise. Based on the premise that homicidal maniacs, as Wednesday Addams once noted, look just like everyone else, The Barber plays around a bit with the usual serial killer tropes, but rarely in any meaningful way. There are twists and turns in the plot and enough doubt about John’s intentions to keep us interested, but there are too many moments where The Barber relies on generic thriller formula, too afraid to stray too far off the well-worn path.