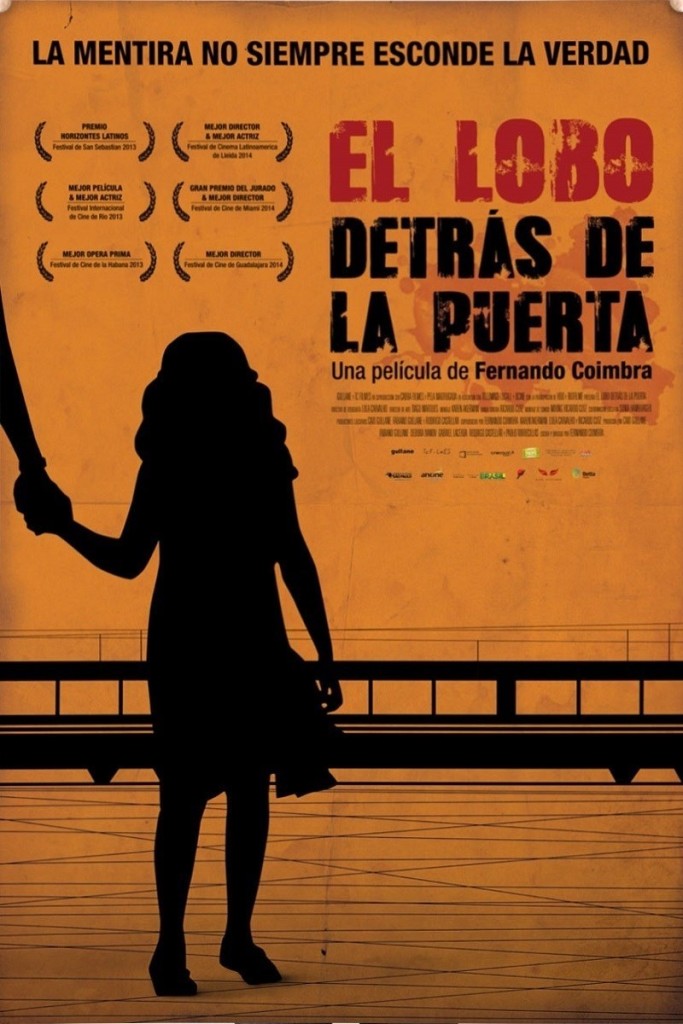 It’s a warm and sunny day in Rio de Janeiro when six-year-old Clara (Isabelle Ribas) goes missing from her school. Her panicked mother Sylvia (Fabiula Nascimento) reports it to the police. During questioning, the girl’s teacher explains that a family friend named Sheila came to get the girl, but Sylvia has no idea who this Sheila could be. Then the teacher drops a bombshell: the girl knew who the woman was, because she ran to her as soon as she saw her. When the girl’s father Bernardo (Milhem Cortaz) arrives at the station, he has a bombshell of his own: he knows a woman named Rosa (Leandra Leal) has taken Clara to get back at him in some way. Bernardo won’t readily admit to who Rosa is, but the detective (Juliano Cazarre) has already figured out that she’s his mistress.

A Wolf at the Door (O Lobo atrás da Porta, 2013), writer-director Fernando Coimbra’s first feature-length film, is a taut, well-paced thriller that many critics have likened to Fatal Attraction (1987). With its slight police procedural feel, it’s also reminiscent of Kurosawa’s High and Low (1963), albeit with a non-linear timeline and never any serious talk about ransom for the little girl. And Wolf at the Door is no scorned woman flick for the paranoid males among us, anyway, but a harrowing look at the costs of extramarital affairs in a society where the risks a woman takes are far greater than the man’s.

When brought in by the police, Rosa’s first story is that she got caught up in a convoluted mess involving Sylvia cheating on Bernardo. Rosa finally admits either the truth or her version of it, we’re never sure. It’s a complicated and chilling story involving abuse and accidental pregnancy and multiple false identities, and on one level, Rosa’s desire for revenge after what Bernardo put her through is understandable, at least for an audience who has the luxury of regarding these events at an emotional distance. But Rosa’s revenge always involves using women and children to her own ends. It’s human nature for people who are (or feel) oppressed to attack those who are on the same level or below them rather than risk attacking someone stronger, either physically or socially, but as Bernardo says in one of the earliest scenes, Rosa thinks taking Clara is a game. Any right-thinking person knows otherwise, and slowly we learn just why Rosa isn’t thinking clearly.

For the first half, the film quietly forgets that Clara’s mother even exists. It’s only when Rosa enters her life posing as someone she isn’t that Sylvia comes into view. She’s a warm and engaging woman, and it feels a bit like the film isn’t playing fair when it allows her to so easily be taken in by Rosa’s lies. Bernardo knew full well what he was doing when he took up with Rosa and brought her (tangentially) into the family, but Sylvia was hookwinked, and the film seems to have little or no sympathy for her. It’s not so much out of contempt for the character, though, but because Wolf at the Door believes Rosa is more interesting.

Some of this is intentional, of course, and Coimbra has some fun with it, such as in the steamy sex scenes which remind us with tight shots of Bernardo’s goofy teeth and Rosa’s furrowed brow that what feels good when doing it doesn’t necessarily look good when watching it. Coimbra is purposely denying the audience their clandestine jollies, and at the same time pointing out, at least for anyone paying attention, that Rosa isn’t always enjoying the one thing Bernardo wants her for. Yet there is never a scene with even a fraction of that kind of emotional revelation for Sylvia. She’s little more than a plot device, and by failing to allow Sylvia much motivation or action, the film essentially caters to the old trope that a psycho scorned she-bitch is always more interesting than someone’s mom.

Despite this, Wolf at the Door is an engaging and intense film. The deliberate pace turns relentless by the harrowing if inevitable conclusion. Rosa is an unreliable narrator, but her story is the only solution to the mystery of the missing girl that we’ll ever get, even if it’s not a wholly satisfying one; we’re on shaky ground, just like Rosa was, thus as desperate for closure as she is. With a tight plot and confident direction, A Wolf at the Door shows Fernando Coimbra is a director well worth watching.