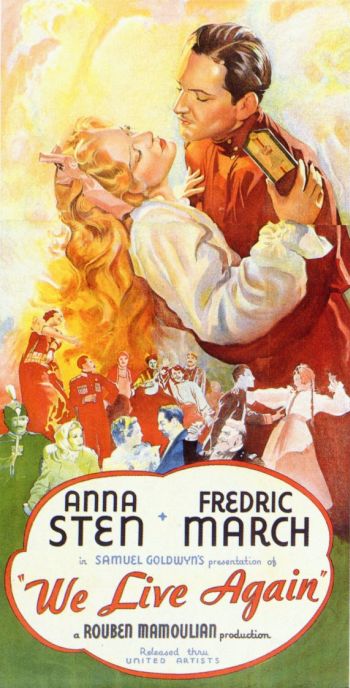 If early Hollywood films are any indication, a good 47% of women by volume found themselves abandoned, unmarried and pregnant at some point in their lives. They rarely suffered much by way of social ostracism — there was almost always a progressive aunt or someone willing to pass the child off as their own — and the years between birth and the child’s teens flew by at a curious speed. And by “flew by” I mean “were shrugged off with a title card announcing that the film has skipped 18 or so years because it’s easier that way.”

We Live Again (1934), recently released on MOD DVD by Warner Archive, is one of the most dreary of these abandoned women plots. Based on Leo Tolstoy’s novel Resurrection, We Live Again concerns young Prince Dmitri Ivanovich Nekhlyudov (Fredric March) and his undying passion for farm girl Katusha (Anna Sten). Set at some vague point prior to the 1905 Revolution — one assumes roughly 1899, given the publication of Tolstoy’s novel — the 20-something Prince Dmitri is an idealist embracing anti-capitalist philosophy, though his family is irritated by him and Katusha is mostly uninterested. 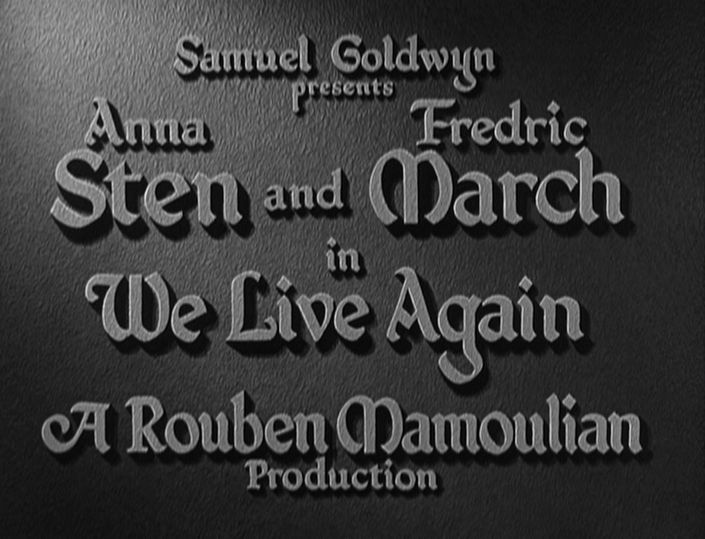 Well, the child-like Katasha is uninterested in politics, but very interested in him. After a few years in military service, where Dmitri indulges in gastronomic (and other) orgies like the good, capitalist member of nobility he is, he returns to the farm a changed man — the kind of man who seduces Katusha and leaves her an envelope of money in the morning before running off. She finds herself pregnant and without a job; months later, the baby dies. Years pass and Prince Dmitri, on the jury for a murder trial, is horrified to discover Katusha is one of the defendants. Now a world-weary prostitute, she’s being framed for murder, and Dmitri suddenly develops a conscience about his past.

Being a grand, sweeping melodrama, it’s no surprise there were at least ten versions of this story filmed in various countries prior to director Rouben Mamoulian’s film. Tolstoy wrote Resurrection after hearing the tale of a young woman whose real life was sadly similar to Katusha’s, and interestingly, Tolstoy had a similar story in his own past regarding a servant named Masha. He seduced the woman, she was fired, and soon after died. Tolstoy, like Dmitri, seems not to have developed a conscience about her until later in life. 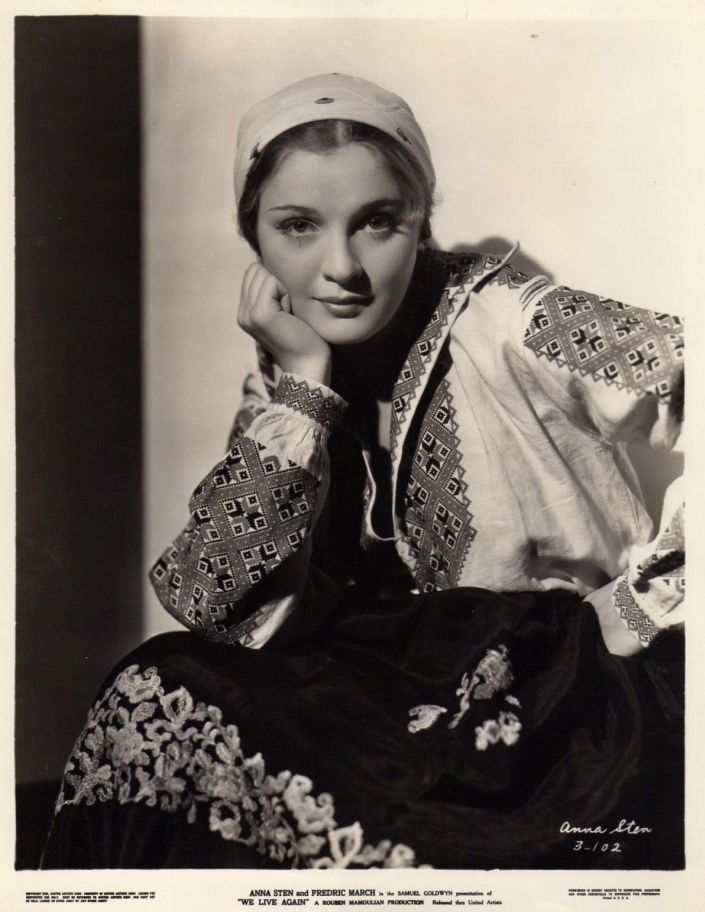 Gorgeous publicity photo of Anna Sten for We Live Again.

We Live Again is one of those films noted not for its success but its lack thereof, which, in this case, is usually laid entirely at the feet of Anna Sten. The beautiful Russian actress was brought to the U.S. by producer Sam Goldwyn in the early 1930s; he hoped, as every book and webpage and article on the topic will tell you, to turn her into the next Garbo. But the effervescence and screen presence she showed in Russia in films such as The Girl with the Hatbox (1927) never materialized on American screens, and after three films, her career with Goldwyn was over.

It was a career many were following closely, in part because Goldwyn was the kind of man who was always in the middle of something nutty, and many of the big Hollywood studios had a history with him that meant they were glad to see his failures, though there weren’t very many. Sten was the biggest of his failures, regarded as a publicity stunt that haunts Goldwyn’s legacy to this day… and if that sounds like Sten is being treated like a prop or object, that’s because most people see her exactly that way.

Still, it’s difficult to feel sorry for Sten, because her inability to relate in an accessible way to the camera is astonishing. It’s as though she had no idea how the camera perceived her, and often moved in such a way that she looked silly, like a hilariously untalented little kid pretending to be an actor. Her line readings were consistently line-by-line, in that each line she uttered has a certain inflection and was matched with certain actions, but these actions were outsized and obvious, and there was no cohesion to her entire performance. At her best moments, she appears to be imitating Carole Lombard; in fact, after the halfway point when Sten’s Katusha is a hardened prostitute, there are moments where you’d swear you were watching Lombard in Ladies’ Man (1931), only in Russia at the turn of the 20th century (no pun intended).

Many critics at the time praised Sten’s performance, most notably in Variety and the New York Times, and critic Otis Ferguson also had good things to say about her. But these reviews all read like someone desperate to find something nice to say about the lady who is trying her darndest up there on the screen, and sometimes, one has to wonder if the praise was more for the terrific movie surrounding her than it was for her alone. This is the film, after all, that caused Goldwyn to coin the phrase, “The public stayed away in droves.” 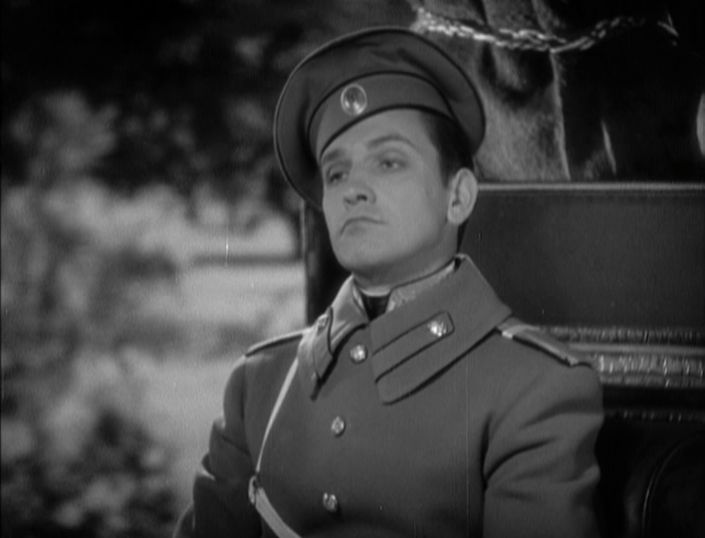 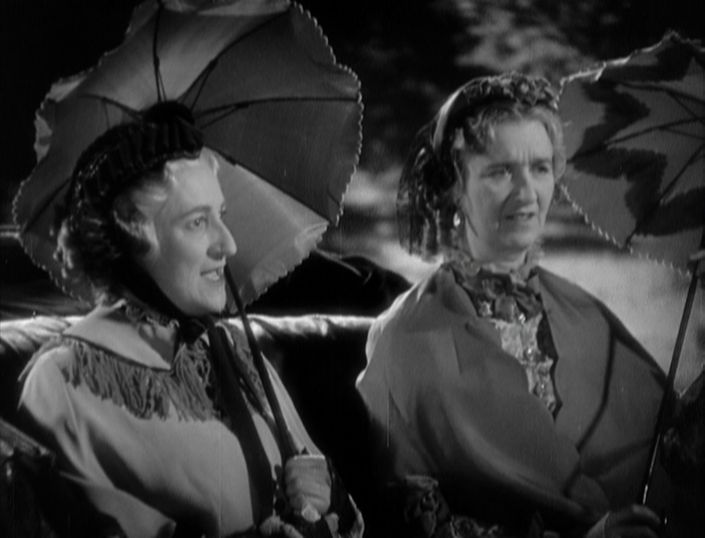 Dmitri’s aunts look at him like this all the time, and it’s well deserved. On the left is Ethel Griffies, who plays my favorite character in The Birds (1963): the ornithologist.

We Live Again is gorgeous to look at, lensed by Greg Toland, who had been working for the better part of a decade on such beautiful films as The Winning of Barbara Worth (1926) and Raffles (1930). Fredric March puts his all into this performance despite reportedly loathing the film, and he’s quite good as Dmitri, but just like every other film from this era, his intensity sometimes turns into ham when it’s not properly controlled. 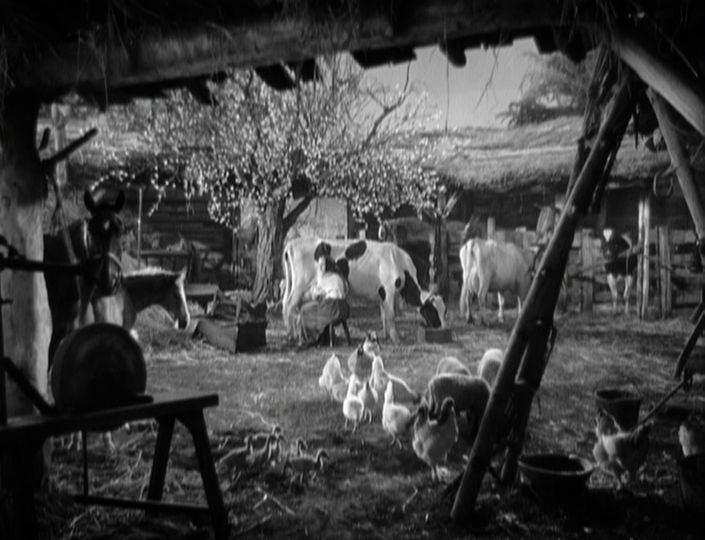 Another surprise is the undisguised socialist message in this film, which went almost completely without comment at the time, as socialism was seen in the U.S. as a viable left-wing political philosophy. That would change soon — boy, would it change — but even for a time when socialist propaganda wasn’t exactly unknown, We Live Again is particularly strident.

The biggest surprise is the script, which can’t help but go into the kind of high-tone melodrama people cringe at nowadays, but includes a few real howlers of social commentary. “He’s a great thinker — he’s wanted by the police!” raves Dmitri about one of his anti-capitalist heroes, in a line that must surely have been written by Preston Sturges, who worked on this adaptation, if you can believe it. In more surprising news, the script was praised by Production Code enforcer Joseph Breen as being such a tasteful way of dealing with pre-marital sex that We Live Again “could serve as a model for the proper treatment of the element of illicit sex in pictures.” 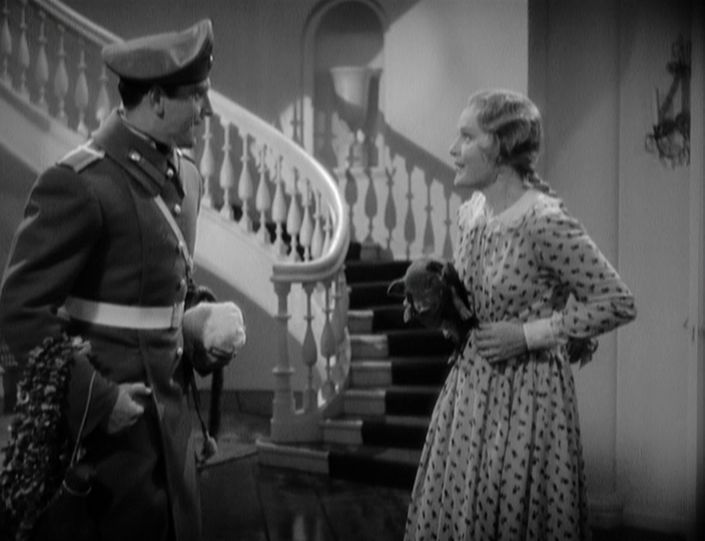 It’s difficult to know what to do with We Live Again. It’s a solidly mediocre film and probably best for those curious about Sten and her brief almost-career, but otherwise, it simply doesn’t fit into any sort of category. That’s not to say it transcends genre or anything, because it certainly does not, and it’s a pretty bleak film, but it’s also a very odd film, odd enough that it warrants a look from fans of this era of cinema. And let’s not be rude: socialists would want to take a gander at this, too.