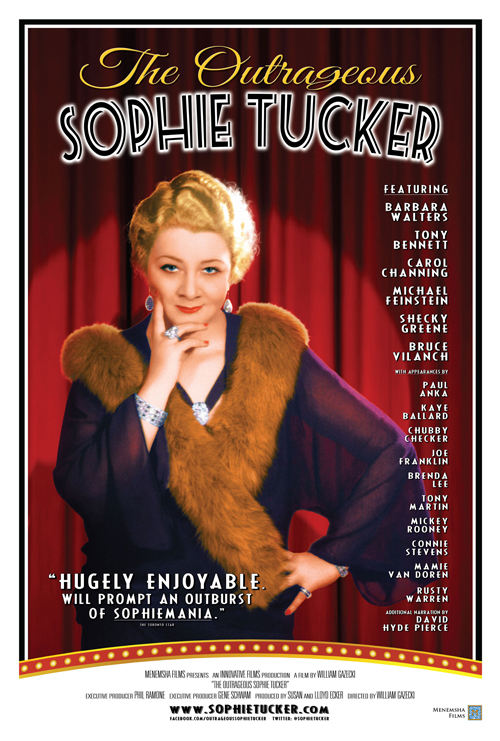 Sophie Tucker was fabulous, flashy and a born entertainer. A true rags-to-riches story, she started out in Vaudeville in the early 1900s; by the early 1920s, the extraordinary Tucker was a major singing star. Known for her big, jazzy voice, bawdy songs and outrageous fashions, Sophie was exactly as she was billed: The Last of the Red Hot Mamas. She wowed audiences in the United States as well as overseas for over five decades, and though she may have come across as tough and worldly, she also had a natural, easygoing way about her, and could call dozens, perhaps hundreds, of fellow celebrities as friends. Though she is largely forgotten today, William Gazecki’s newest documentary, The Outrageous Sophie Tucker, is sure to raise interest in her once again.

Filled with tons of photos and newspaper clippings, Outrageous also features interviews with Tony Bennett, Shecky Greene, Carol Channing, Bruce Vilanch, Barbara Walters and more, along with a few relatives and family friends. Some radio and screen appearances made it to the film, as do a few archival audio interviews, but for the most part, Sophie’s own voice is missing here, which is as disappointing as it is perplexing.

Far too much time in Outrageous is spent with producers and biographers Lloyd and Susan Eckart, and their moralizing, errors and lack of professionalism hinder the film in a major way. They make pronouncements about age, sexuality, race, weight and gender that range from arbitrary to old-fashioned to outright offensive; sadly, they’re not the only ones, and it’s astonishing that so many clueless comments made it into the final edit. For instance, not only is there is almost no mention of Tucker’s influences from African-American jazz singers, but Michael Feinstein is brought in to tell us that Tucker invented modern jazz phrasing all by herself (she didn’t) and black singers only mimicked her (they didn’t).

The Eckers have such strong preconceived notions about talent, beauty and gender roles that they prove themselves time and again to be the exact wrong people to interrogate Tucker’s performances, celebrity, personality or historical significance. It’s inexplicable that the film would be based so heavily on this husband-wife research team and Sophie’s own scrapbooks, to the exclusion of everything else. There are many fantastic news articles, archival interviews and radio clips of Sophie to draw from, and while some makes it into Outrageous, too much time is set aside for the producers. In fact, it’s so out of hand that, even when an expert or family member is allowed to talk, Lloyd’s voice can be heard in the background, and the clips are truncated so the camera can go back to Lloyd. This is unfortunate, because experts like Judy Tzu-Chun Wu and Dr. Jan Lewis are far more knowledgeable, entertaining and, it should be noted, correct.

It’s not that the Eckers don’t have enthusiasm, because they very much do, and that enthusiasm is what keeps The Outrageous Sophie Tucker from completely flying apart at the seams. Well, their enthusiasm, and the fact that Tucker’s outsized personality and talent were so great that even a tepid documentary about her is still a lot of fun to watch.

The Outrageous Sophie Tucker shines the spotlight once again on a great 20th century entertainer who has been all but forgotten, and for that it is well worth the watch. But we live in a culture that expects instant, immediate access to information, and as such, a little cottage industry of half-formed biographies of long-gone celebrities has cropped up. It’s an industry where shoddy research by inexperienced people with an agenda often gets passed off as fact, and eaten up by trusting people hungry to learn more about these bygone stars. Now, it seems, this cottage industry has expanded from flimsy biographies to paper-thin documentaries, and that’s a shame.

Everyone involved in The Outrageous Sophie Tucker had their hearts in the right place, but it takes more than good intentions to make a good documentary. Sophie Tucker was an amazing entertainer, larger than life and grand and influential beyond almost anything we can imagine. She deserves a big, brassy documentary unafraid to tackle the difficult subjects, not a timid vanity project.