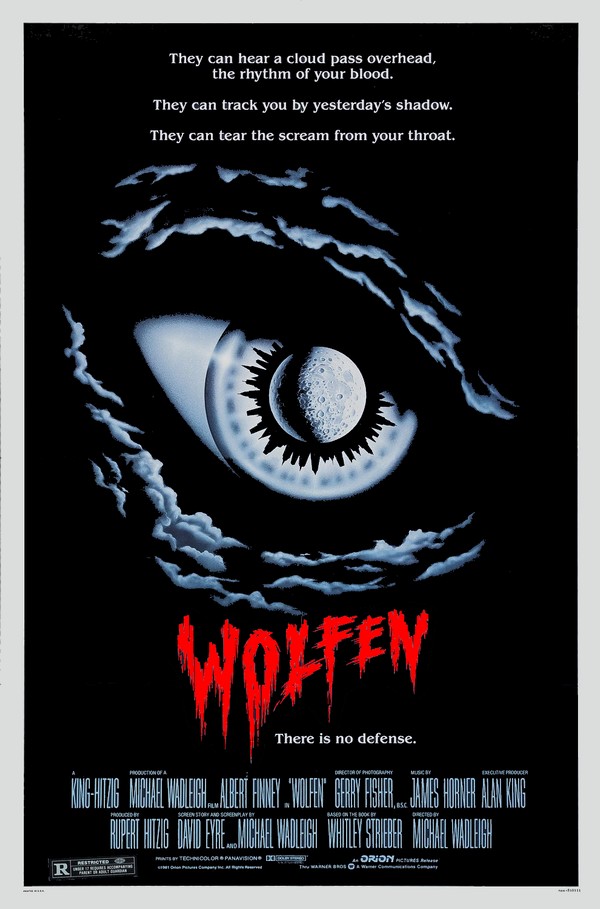 Burned-out police detective Dewey Wilson (Albert Finney) gets reluctantly called in to investigate the murder of high-profile millionaire Christopher van der Veer (Max M. Brown) in Wolfen, the 1981 sociopolitical horror film directed by Michael Wadleigh. Van der Veer, his wife Pauline (Anne Marie Pohtamo), and their driver Harrison (Jeffery V. Thompson) were found sliced to death in a public park, but police coroner Whittington (Gregory Hines) knows almost immediately that the weapon wasn’t metal. Wilson tosses around a few ideas about synthetic or plastic weapons and ritualized killings, before more dead people start turning up with similar wounds. They’re found all over New York City, however, from all socioeconomic walks of life; as one policeman says, they can’t possibly be connected, because “it’s a big jump from the South Bronx to Wall Street.”

But they are connected, says Whittington, because all the victims’ bodies have unidentified hair or fur on them. A trip to local zoologist and wolf lover Ferguson (Tom Noonan) gives Wilson and Whittington their final clue: the fur is lupine, but wolves have been extinct in New York for decades. Still, there are radical elements in New York that would have wanted to take down van der Veer, who owned companies on every continent and had disrupted holy grounds and burial sites many times; as an investigator wryly noted, he was not exactly a friend to all nations. Most recently, he had been planning on developing an area of the South Bronx, coincidentally — or not — where more people are being ripped apart by weapons no one can identify.

Strung out and a little off-kilter, Wilson decides to pay a visit to convicted felon Eddie Holt (Edward James Olmos), a Native American who had once been associated with the radicalized arm of the American Indian Movement. Holt plants the idea of shapeshifting in Wilson’s head, and at that point, the investigation branches off: in the background are the police going after traditional suspects, while Wilson, Whittington and Ferguson approach these murders as supernatural in nature. Investigator Rebecca Neff (Diane Venora) is brought in to partner up with Wilson, too, though she ends up having the thankless role of asking questions so Wilson has a chance to explain things for the audience.

Wolfen is a gorgeous film, full of fantastic footage of early 1980s New York City courtesy D.P. Fredric Abeles. Overhead shots show the absolute destruction of the South Bronx, especially in the notorious area of Charlotte Street. With buildings knocked down and the rubble left behind, burned out shells, abandoned cars, graffiti and worse strewn about, the area in the 1960s through to the early 1980s really did look like a war zone. It was dangerous and abandoned, a land of poverty and crime that had been decades in the making. As Howard Cosell famously never actually said [2] during the 1977 World Series as a tenement burned in the distance, “There it is, ladies and gentlemen. The Bronx is burning.” 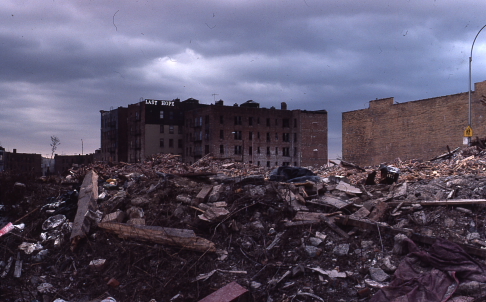 An area of the South Bronx in 1980, very close to where Wolfen was filmed. Photo by John Fekner.

The (Christian) church where much strange behavior originates from in Wolfen was constructed at East 172nd and Seabury, just north of Charlotte Street, specifically for the film, then burned to give it the look of, well, the burning Bronx. The Notes on New York blog has some great visuals of the area then and now, mixed in with overhead shots from the DVD version of Wolfen, all labeled. More can be found at Street Films’ page on Wolfen here.

The idea of the Bronx being essentially unsalvageable was pervasive in America at this time, and Wolfen was just one of several films released at about the same time which explored the idea that the Bronx, and maybe more, were doomed. Unlike the other films, however, Wolfen was combining these sociopolitical concerns with what was a short-lived werewolf renaissance on the silver screen. The film also seemed to be suggesting a decidedly 1960s solution to a thoroughly 1970s disaster: letting the land revert back to nature, with the understanding that it was stolen, and as such, never should have been subjected to these problems in the first place. 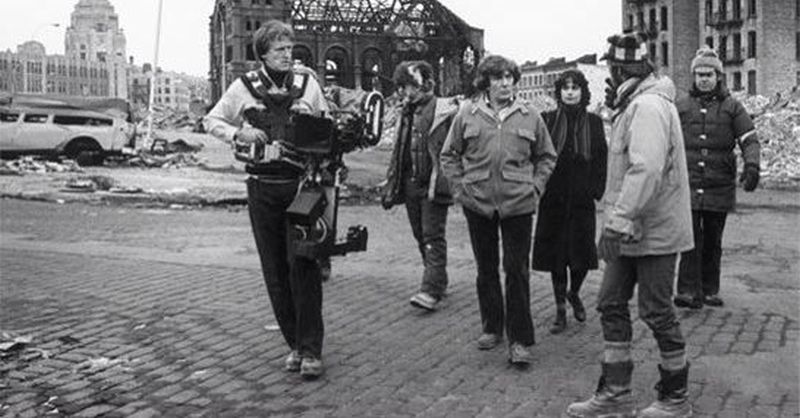 During filming of Wolfen. Garrett Brown is the Steadicam operator on the left.

Wolfen creates a decidedly vertiginous feeling for the viewer. It’s an emotional vertigo thanks to a New York that has been fully Gothic-cized, while also seemingly drained of its millions of inhabitants, leaving behind cool, damp, empty parks full of fog, and streets covered in an unappealing drizzle. It’s a physical vertigo, too, not just from the requisite off-kilter horror shots, but from the bird’s-eye views and impressive overhead footage. One of the most astonishing scenes in the film was shot on top of the Manhattan Bridge, and actually on top of the bridge — these are not special effects. Finney is fantastic in this encounter with Olmos, who is even more impressive in a later scene, one where Wilson catches (maybe) Eddie Holt shapeshifting into a wolf.

We also get several shots throughout the film of what I like to call Wolf-O-Vision, scenes in low-color and high contrast with mostly just silhouettes shown. What’s nice, if not a little obvious, are the scenes where we see the police equipment filming radicals as suspects and using infrared to determine if they’re lying or not; that primitive (for us) infrared looks just like Wolf-O-Vision, as do the brief shots seen from a drug-user’s point of view. 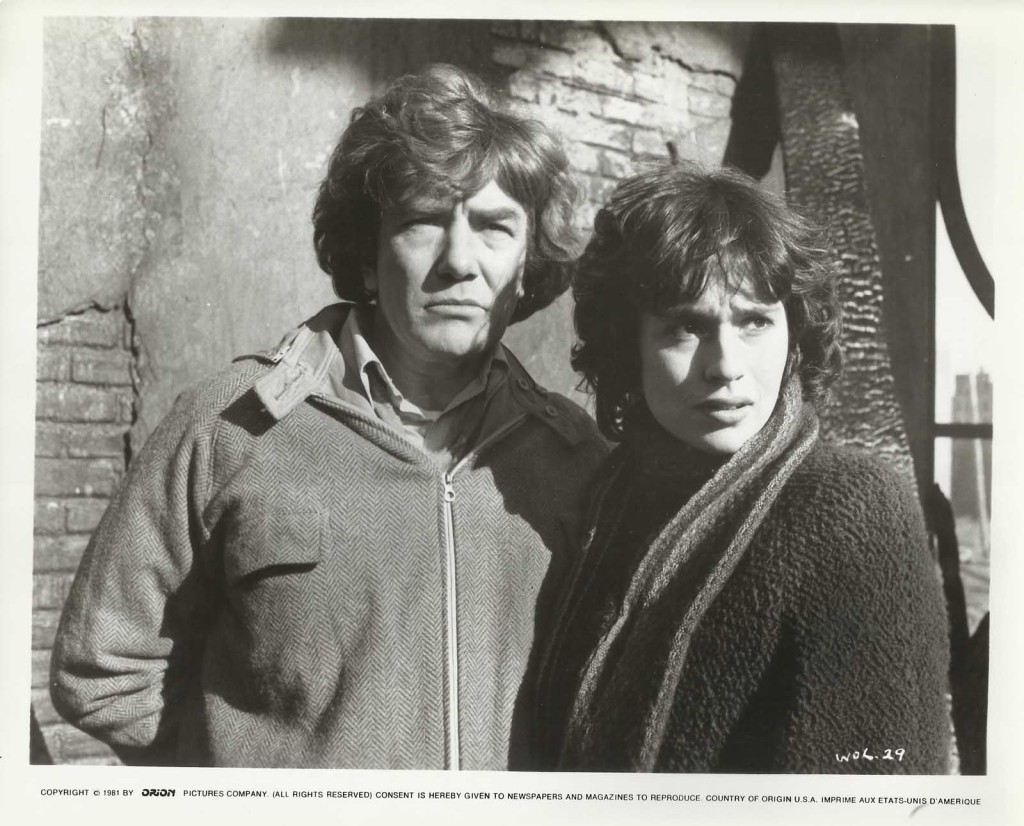 The much talked-about finale of Wolfen gets a bad rap, and unfairly, I think. Explaining a supernatural horror movie is almost always a mistake, but Wolfen’s ending is so bonkers that its mere existence opens up a host of possibilities, rather than the singular explanation most people feel it provides. That feeling of wondering what the hell just happened at the end of this film is, I’m certain, intentional.

Wolfen sports an impressive score and special effects, thanks to two people who would go on to do amazing work. This was one of the first film scores composed by the late James Horner, and his trademark style is on full display. Horner always had a sweeping, almost old-fashioned style, and it’s perfect for the Gothic style of the film. Special visual effects were under the direction of Robert Blalack, who worked on Star Wars, Robocop, and Altered States, and the F/X in Wolfen are quite good.

And if that won’t get you to watch Wolfen, maybe this will: Tom Waits has a cameo.

Warner Archive has recently released Wolfen in a MOD Blu-ray that comes with the trailer and subtitles. It is a gorgeous print visually, and the audio is spectacular, using the “Megasound” format that has enhanced low/bass tones. Some tech spex and screen grabs are here at Blu-ray.com.[3]

[2] In true Wikipedia fashion, the “Bronx is burning” quote has been verified… by an article that explicitly states that it never happened.

[3] As someone who had only seen Wolfen in a VHS pan & scan release with some video problems — someone had warped the tape trying to see Edward James Olmos’ penis in his nude scenes, no joke — this version of Wolfen is astonishing. It’s a whole new film. If you never had a chance to see a really good print of Wolfen, you owe it to yourself to do so.