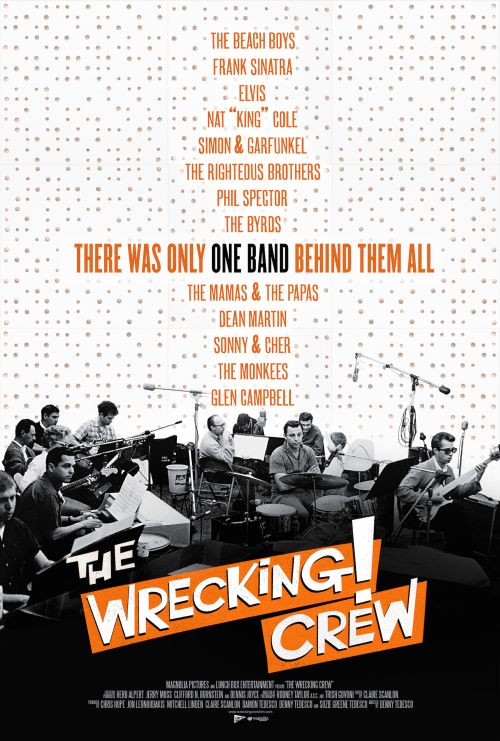 It was the 1960s and American pop music, long dominated by the so-called “Brill Building Sound,” had moved across the country. California was where it was at, and any musician who wanted to make it big needed to get themselves to Los Angeles. And get there they did, though many bands discovered something very strange: they wouldn’t be playing the instrumental tracks on their own albums. The fans never learned that they weren’t hearing their favorite hunky guitarist on the latest hit, but rather an unknown L.A. studio musician who belonged to an informal group known as The Wrecking Crew.

Denny Tedesco’s documentary, in limited theatrical release after years of festival and press screenings, is filled with fantastic songs and photos and interviews from a host of musicians and stars. Crew follows the careers of several members of this group, primarily Denny’s father Tommy Tedesco, a fine and prolific guitarist you have heard even if you think you haven’t. He played on thousands of songs such as “Be My Baby” by the Ronettes and Sinatra’s “Strangers in the Night,” the themes to the “Batman” and “Bonanza” television shows, on the soundtracks to The French Connection, Enter the Dragon and Skidoo and, well, pretty much everything.

The same could be said for nearly every member of the Crew. Bassist Carol Kaye and drummer Hal Blaine, both heavily featured in the film, also have thousands of credits to their names. It’s not that record companies meant to mislead the fans necessarily; using studio musicians was just how it was done. As Micky Dolenz of The Monkees ruefully notes in Wrecking Crew, this common practice makes the backlash his own band received about the use of studio musicians somewhat ironic.

The sheer number of songs the Crew appeared on is overwhelming, and their contribution to American pop music cannot be overstated. But despite its good intentions, Wrecking Crew doesn’t get anywhere close to fully exploring those contributions. There’s a story, one that doesn’t appear in the documentary, about the recording of Neil Diamond’s hit “Cracklin’ Rosie.” Several Crew members were at the recording, including keyboardist Don Randi. With a time crunch and a half-written song, Randi and Diamond concocted that now-famous opening keyboard riff. But as Diamond’s bassist Randy Cierley later said in an interview, that riff was straight out of the Andrew Sisters’ 1956 pop tune “Beer Barrel Polka.”

This kind of borrowing was exceptionally common and a big reason why a studio musician needed far more than technical skill to succeed, but also a solid familiarity with popular music in all genres. It wasn’t just because they might be playing for a Country-Western artist in the morning and a Latin instrumentalist in the afternoon, but because groups and singers frequently relied on the studio band to get a certain sound, help fill out a song or even write their own charts.

Yet the contributions the Wrecking Crew made toward writing and composing are largely ignored in favor of focusing entirely on their performances. It seems to be part and parcel of the film’s Herculean effort to keep everything cheerful and light and as inoffensive as possible. It’s the kind of documentary where any mention that several musicians insist they were never called “the Wrecking Crew” in the first place is edited out. There are no references to Muscle Shoals or American Sound Studios, prominent members of the group are never seen, and while Hal Blaine is allowed to grouse at length and full volume about his ex-wives, there are sharp, clumsy edits when any other interviewee starts to delve into darker areas.

The Wrecking Crew is a gentle documentary; anyone hoping for tales of flaring egos or egregious rock star behavior will need to look elsewhere. But it borders on sappy at times, and by being so unrelentingly nice it forces itself to remain incidental, sometimes even shallow. It’s all about the music and camaraderie and hard work and success, and it’s a fun and entertaining ride, if not a particularly probing look, at a fascinating part of American music history.