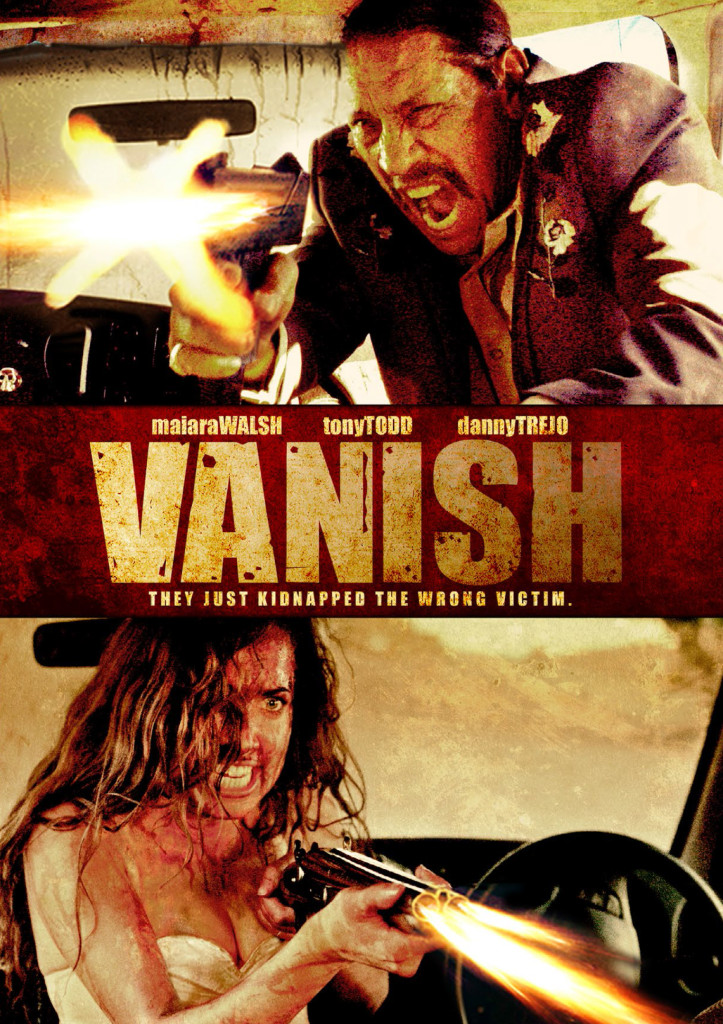 Bryan Bockbrader’s directorial debut VANish (2015) is a tight little action-horror film with plenty of twists, turns and splatter to entertain even the most jaded of indie movie fans. This ultra low-budget flick was shot in just 13 days and runs at a confident, snappy pace. Stalwart indie legends Tony Todd and Danny Trejo have small but pivotal roles, and they’re both terrific here, of course, because they’re Tony Todd and Danny Trejo. But make no mistake, VANish belongs to its four leads, especially Maiara Walsh, who puts in a fantastic turn as a strong and savvy hostage victim.

Jack (Austin Abke) and Max (Bryan Bockbrader) have a solid plan: to kidnap Emma (Walsh) and hold her hostage until her father coughs up $5 million. But the plan goes south almost immediately as the unhinged Max starts shooting at the first sign of trouble, and the addition of Jack’s old Army buddy Shane (Adam Guthrie), a man sporting a nasty case of PTSD, doesn’t help. Jack finds himself in the thankless role of the smartest guy in a room full of dimwits who have no idea how to handle their captive. A surprise visit from some goons in ski masks and a series of startling revelations turn what at first seemed like a typical (albeit ill-advised) kidnapping into a very dangerous situation.

Filmed entirely from inside the van where Emma and her kidnappers spend most of their days, VANish practically relishes in its low-budget constraints. Cinematographer Colby Oliver does an fine job of keeping the visuals fresh while never letting the viewer forget that they’re stuck in this dingy, cramped space with everybody else. It’s exhilarating and terrifying and you are guaranteed to come down with a raging case of claustrophobia within minutes. But VANish is also funny, and at all the right times. This is a film that displays a love of exploitation films and has a lot of fun with the genre — and what’s the point of an exploitation movie if you aren’t going to have some fun with it? — but there is also a deep respect of the genre, and a keen understanding of the ability of exploitation to objectify its characters while also elevating and empowering them.

It’s a testament to Bockbrader’s skill that the trickiest scene in the film is the best. The moment is a group confession, a typical enough scene in horror films, but in VANish avoids becoming a block of exposition; instead, it’s a revelation. There are surprises and admissions of guilt, honesty mixed with self delusion, confusion and humor and more. It’s pages of prose come to life without pretension or self-consciousness, a scene so confident it’s content to merely inform the narrative rather than overwhelm it.

VANish has all the requisite tropes about family and betrayal that every good action-horror film should, but there’s something really interesting going on just under the surface here, too. The men of VANish are troubled, without question, and though their troubles come from a whole lot of different places, they always come back to blaming women for everything wrong in their lives. Coupled with Emma as their primary victim, this would be easy to chalk up as a set-up for a typical “girl power” kind of finale. But as the film unwinds, we realize there are more victims than we ever seen on the screen, and women aren’t the only targets of their rage, not by any stretch. There’s a terrific subtlety in this revenge flick, insights nestled quietly between the beer cans and Facebook jokes and sawed-off shotguns. VANish is a solid, entertaining film, and marks Bockbrader as an up-and-coming director to watch.