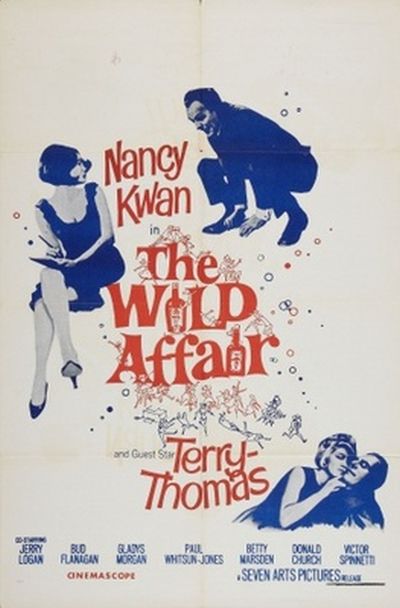 The Wild Affair (1963) is a charming, light and sophisticated British sex comedy, sadly forgotten despite being incredibly influential in its day. A vehicle for early-60s cinematic It Girl Nancy Kwan, The Wild Affair concerns a young working girl, her hapless fiance, assorted colleagues and the ever-present worry that one has not lived enough before jumping into that metaphorical death known as marriage.

Though a rather calm and collected film once it gets going, The Wild Affair opens with some truly bonkers credits that feature a series of still photos of Kwan, staid and serene on one side of the frame, adorable and spirited on the other. “Spirited” in this case means the stills of Kwan’s head vibrate and hop around like they were cut out and glued onto a popsicle stick, and then filmed as a little kid played puppets with them. And then come the legs: 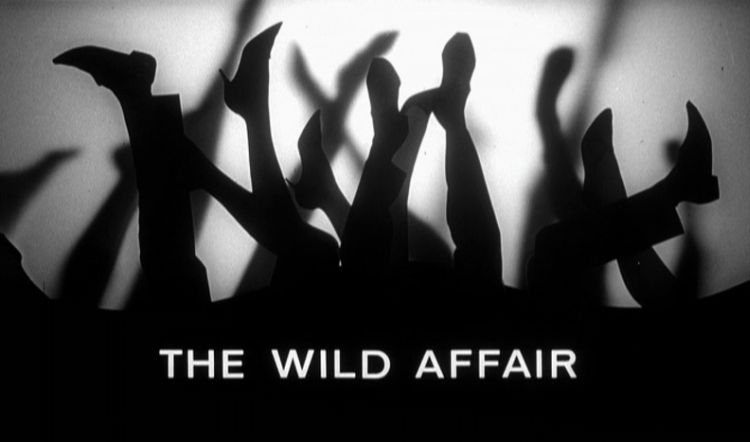 I have absolutely no idea what this is implying.

The Wild Affair is based on the William Sansom novel The Last Hours of Sandra Lee, a title that evokes a sinister end, undoubtedly the author’s intent, but certainly not the film’s. Sansom, now mostly unknown, was once called “London’s closest equivalent to Franz Kafka,” and was known for writing characters made to “face inscrutable futures with patience and resignation, knowing that they can do little to influence the outcome of their lives.”

In his novel, Sandra Lee has to deal with some very harsh truths and a future that’s difficult to accept, while all around her, co-workers and family are saddled with lives that range from banal to tragic. In the film, however, these harsh lives have been tamed. In fact, Sandra Lee doesn’t even exist except in reflections — she’s been turned into the cold, sophisticated, sexually adventurous alter ego of young Marjorie Lee (Kwan). 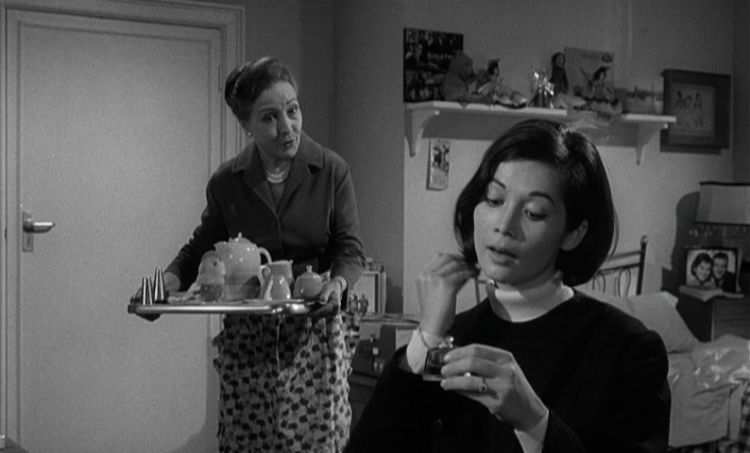 Silent film star Bessie Love plays Marjorie’s mother; Kwan’s character is white in this film. As Anne A. Cheng in The Melancholy of Race points out, the half white, half Chinese Kwan had already played Italian and Tahitian women before this film, and went on to play Inuit and Indian and Spanish women (among others) afterward.

Marjorie is meant to be married soon and must quit her job accordingly; her last day of work is the day of the office Christmas party, which her mother doesn’t want her to go to, having a motherly sort of sixth sense about her daughter’s ambivalence toward walking down the aisle with her virginity hanging over her head, as it were. So Marjorie, feeling rebellious, gets done up in a frilly frock and shiny silver go-go boots and goes to work bright and early in the morning, as one does, planning to stay for the party even though she hasn’t told her fiance about it, and in fact plans to avoid discussing it with him altogether. 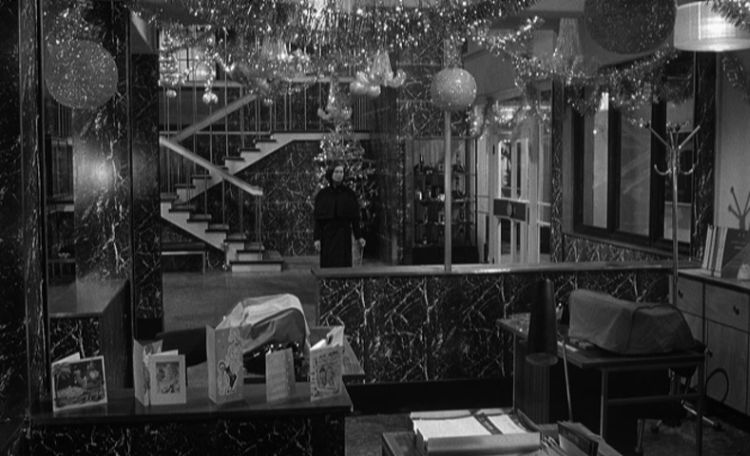 When I said The Wild Affair was influential, I meant it quite literally: The publicity leading up to the film’s holiday release in 1963 was so successful that it changed the look of London forever. Wild Affair is widely considered to be the first cinematic depiction of Swinging London.

And it all started with a haircut. Nancy Kwan was known at the time for her hair: long, shiny, beautiful and nearly down to her waist. But for The Wild Affair, producers wanted a fashion forward look, and that meant giving Kwan a hot new style. At the time, the hottest, most alternative cut was a bob, very similar to the 1920s flapper look — much of the early swinging fashion looks in the 1960s were inspired by the Roaring 20s — and sported by Mary Quant as early as 1962, though wasn’t well known outside of fashion circles.

For The Wild Affair, stylist Vidal Sassoon created a bob for Kwan that was more angled and dramatic than the “Quant.” With plenty of photographers and entertainment press as witnesses, Sassoon went to work on Kwan’s famous long hair, turning it into a gorgeous, trendy new look that caught on with the public. 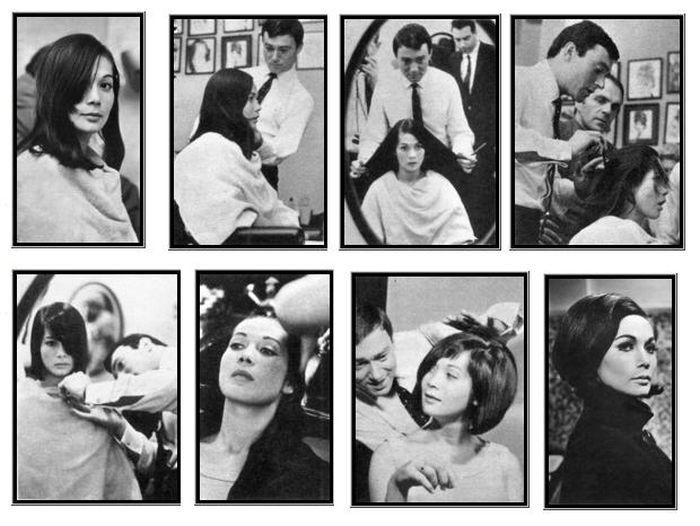 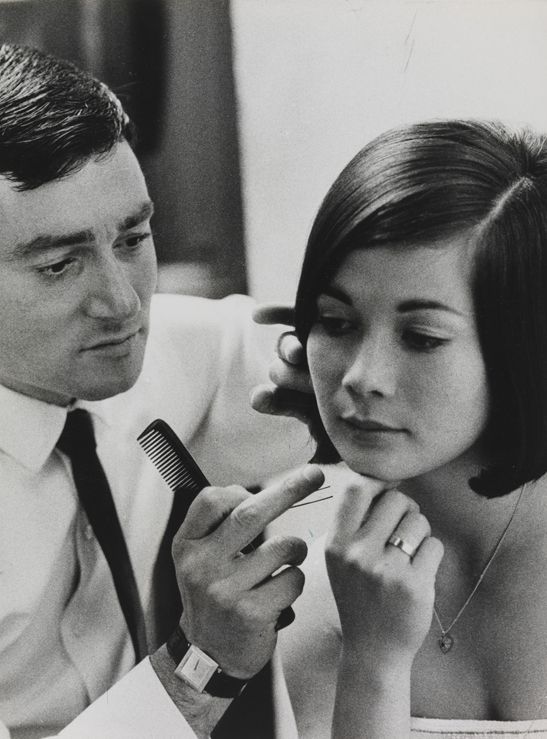 Also popular with the public were Kwan’s fashions in the film designed by Mary Quant; it’s no exaggeration to say that Quant’s legendary career, and to an extent Sassoon’s as well, were launched by The Wild Affair. With Quant’s fashions on Kwan as well as a handful of trendy young co-workers in the office, the film became almost an instruction manual for the hip and with-it. 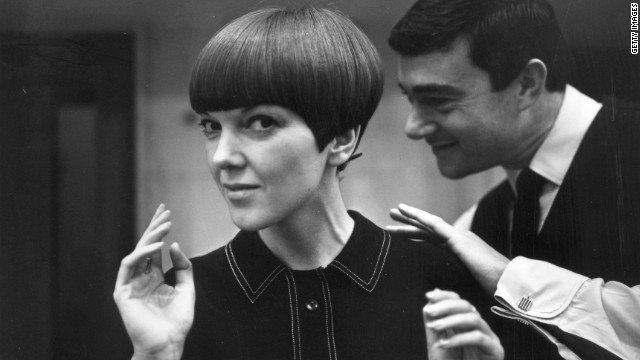 Mary Quant in a now-famous session with Sassoon a few months after The Wild Affair. It was on Quant that he introduced a shorter five-point bob that also caught the public’s eye. 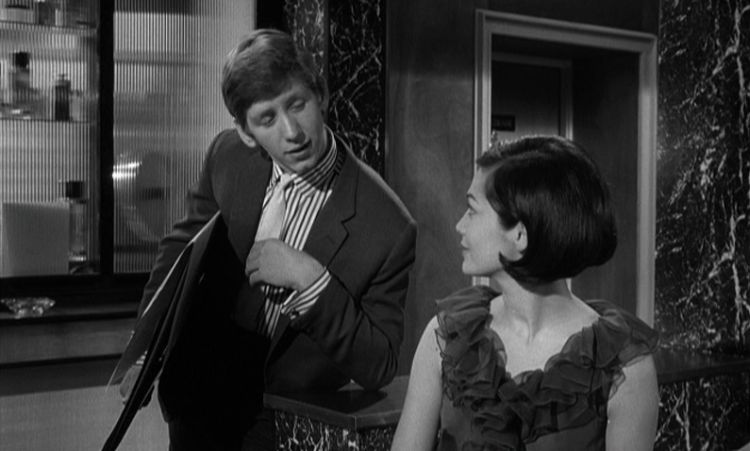 Bone (played by Bernard Adams) in Swinging London fashion, looking just like Ringo Starr. This was filmed several weeks before The Beatles hit it big in the U.K. in October, 1963, and was released in December of that year, before they even came to the United States. Talk about anticipating a trend!

As Sansom wrote, “Successful sin can be conveniently forgotten; failure hangs about forever.” In various shiny objects — part of the fun of Wild Affair is seeing how innovative the filmmakers get in introducing new reflective surfaces — the worldly Sandra shows up to chide Marjorie for being a failure by not having a wild fling, and for not succumbing to the men who desire her. And make no mistake: all the men desire her, not just Terry-Thomas, who is actually much more of a gentleman than the film’s advertising implied. In fact, so many men throw themselves at Marjorie that it becomes hilarious, like a running gag, or the cinematic illustration of Chris Rock’s classic “could I help you to some dick?” joke. 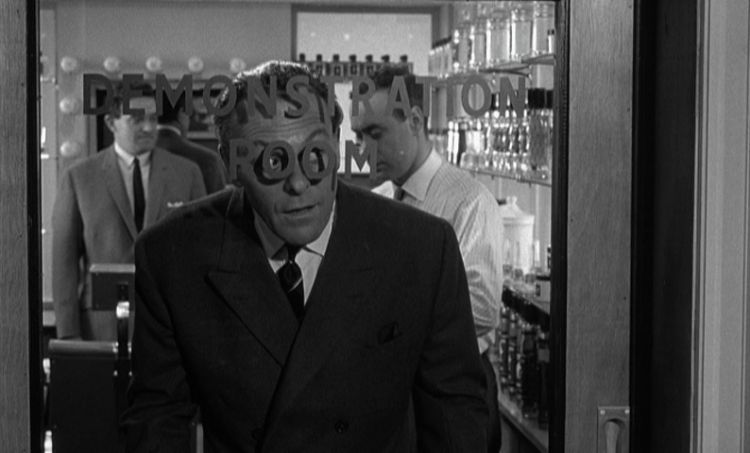 Marjorie’s co-workers and family are all a good-hearted sort, mostly, though Hearst (a fantastic Paul Whitsun-Jones) can be cruel on occasion, and the beautiful, severe Monica (Joyce Blair) is the archetypical stone cold bitch. Fellow secretary Mavis (a wonderful Betty Marsden) is a good friend, but truthfully, they’re almost all good friends at her job, displaying a touching camaraderie with each other even when they’re at odds. And the hardships of life the co-workers go through in the book are largely dispensed with in the film, making it far less harsh than the novel, but charming and delightful.

Kwan is exceptional in this film, and the supporting cast is uniformly terrific. There’s not a single false note in any performance, and some of the more adult conversations between colleagues ring quite true; it’s a mature script without any clumsy sentences or odd euphemisms to make the censors happy. Frank Finlay, Sidonie Bond, Claire Nielson and Joan Benham can be seen in some of the smaller incidental roles, and they’re all great. Well, except Finlay, a chronic over-actor who approached his craft as though he were the bus in Speed: if his acting dropped below 55MPH, he would die. 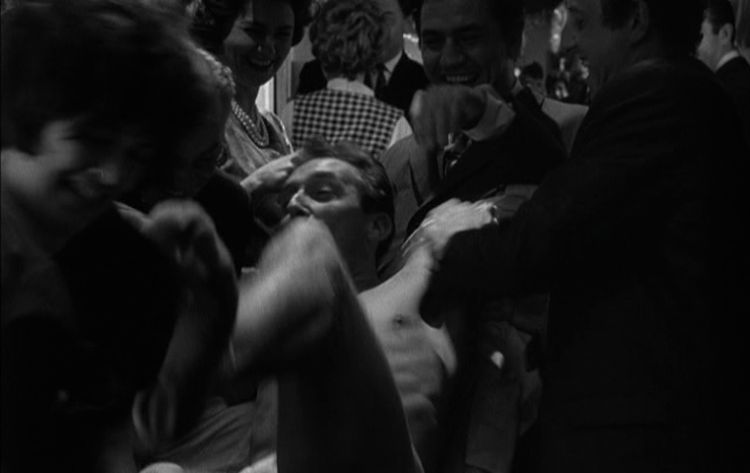 Oh, and that Christmas party? It gets a little out of hand.

The best thing about The Wild Affair, which is a film with a lot of good things going for it, is the portrayal of women as unique, complicated, thoughtful and worthwhile, regardless of age or sexual proclivities. Sure, there’s a heavy hint of “good girls get married” going on here, because this is 1963 and most mainstream films weren’t that forward thinking. But each woman, down to the non-speaking extra in the elevator who makes the absolute best faces when some big ol’ country boy dink comes on to Marjorie, has her own opinion on sex and love and marriage, and each opinion is valid. Even the black widow is humanized here.

“What makes a girl want to take off her clothes in the first place?” Marjorie asks about a fashion model. It’s part of her process in deciding for herself what she wants out of life and men. It’s a fantastic moment, The Wild Affair acknowledging that the true power behind a woman’s agency is not necessarily her sexuality, but her ability to decide for herself what form her sexuality will take. Demands are made on every woman by every man, each of them operating under an unspoken understanding that their individual fetishes should be catered to.

But the women disagree and, as it turns out, they’ve always disagreed, and The Wild Affair wasn’t afraid to say so.

The Wild Affair is available on MOD DVD from Warner Archive. It’s a bare bones release but a nice print, I believe the same one released in Region 2 DVDs about three years back.