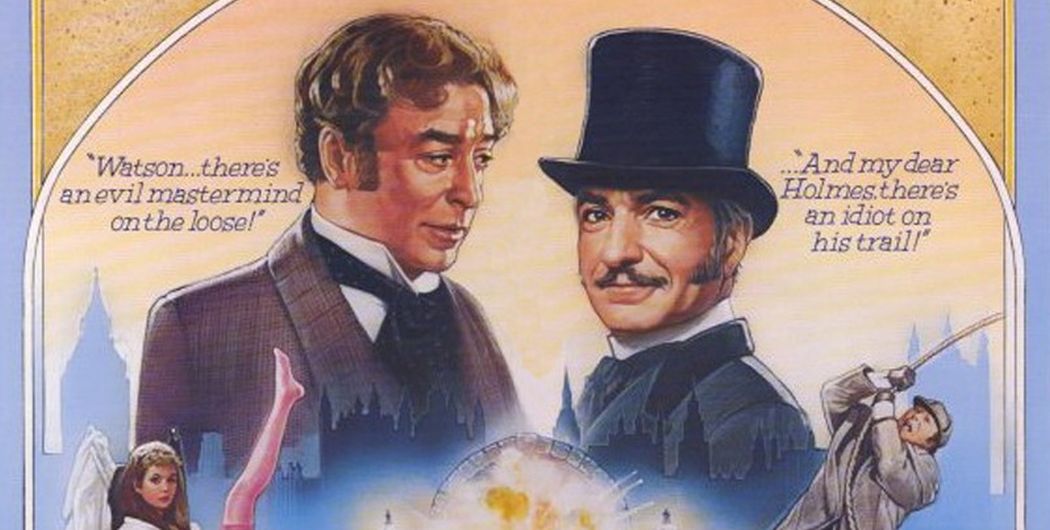 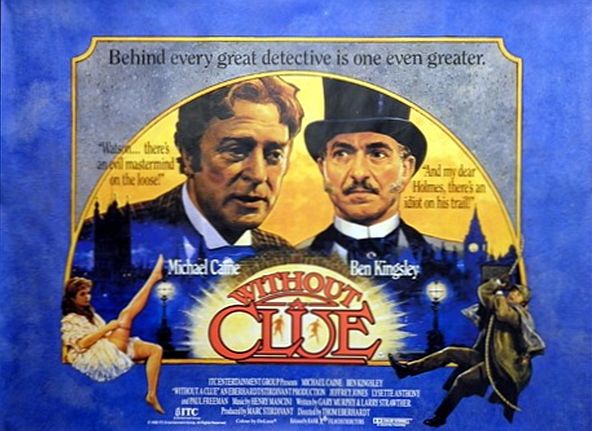 Before they became the kind of actors one gets when one wants to add a little class to an otherwise iffy production, Ben Kingsley and Michael Caine headlined the Sherlock Holmes spoof Without a Clue (1988), a gentle period comedy that cheekily posits that the fictional Holmes both did and did not exist. Without a Clue places Holmes and Watson in a series of very silly situations, not quite what you’d call lowbrow, but far less sophisticated than one would expect the duo to encounter. But it was always a conceit of modern times to portray the detectives as particularly classy; our view of the turn of the 20th Century is a bit more stodgy than those who lived it, and Without a Clue is happy to remind us of that.

After Holmes (Caine) and Dr. Watson (Kingsley) solve yet another case to much public acclaim, we learn that Holmes is no detective: he’s the gambling, womanizing, alcoholic actor Reginald Kincaid, hired by Watson years ago to portray Holmes. Whatever Holmes appears to be in print, Kincaid is essentially the opposite of it, with the exception of his wardrobe and a true fondness for making Inspector Lestrade (Jeffrey Jones) look ridiculous. For all of Kincaid-Holmes’ bravado, Watson is the genius sleuth of the duo and Holmes merely a character created to preserve Watson’s reputation as a solid, dependable doctor.

After one too many slip-ups, Watson has had enough of Kincaid because he is, well, a gambler, a womanizer, and a drunkard. Kincaid’s bungling is only part of the issue: Watson wants some of the glory himself and is tired of Holmes enjoying all the perks. After a few silly mistakes — the public is hilariously indulgent of Holmes’ obvious errors — Watson kicks Kincaid out, promising his Strand Magazine editor (a fantastic Peter Cook in a cameo role) that his new incarnation as The Crime Doctor will be just as popular as Holmes ever was.

Watson’s wrong, of course. When Lord Smithwick (Nigel Davenport) of the treasury arrives with a serious concern — the printing plates for £5 notes were stolen and replaced with forgeries — Watson is forced to bring Kincaid back into the fold. The daughter of a man at the treasury who went missing at the same time as the plates also arrives and tags along on the case, which Watson soon discovers, much to Holmes’ dismay, involves none other than Professor Moriarty (Paul Freeman).

Without a Clue is at times a slight film, clearly reliant on the popularity of the Granada Television “Sherlock Holmes” series starring Jeremy Brett. The layout of the apartment at 221B Baker Street looks so similar to the TV show that it’s impossible to consider it a coincidence. Caine doesn’t exactly stretch his acting chops here, and Kingsley’s tendency to ham is rarely kept in check. But their performances on the whole are quite good, aided by some terrific supporting perfs by young Matthew Savage as a Baker Street Irregular, plus Lysette Anthony, Nigel Davenport and Matthew Sim in a small but very good role (even if they did dub him, probably unnecessarily).

Criticized at the time for being a one-joke film, many fans now consider Without a Clue to be one of the best of the Sherlock spoofs. There are quite a few in-jokes for the discerning Sherlockian, and it indulges in one of the favorite pet causes of many of author Sir Arthur Conan Doyle’s fans: that Dr. Watson wasn’t the dim bulb the 1940s Hollywood films made him out to be. There’s a mystery to be solved in Without a Clue but it’s hardly important, which allows the film to focus on the characters. They’re not the canonical Holmes and Watson, of course, but it’s a nice diversion into a what-if scenario.

The pacing may be slow — critics seemed to point that out quite a bit back in 1988 — but they never noticed just how effective this pacing is in setting the scene for a period piece, which this is, even if it’s also a spoof. This pleasant tempo is punctuated by bits of action, slapstick and the occasional “Woo!” from Kincaid. And you know, sometimes it’s just nice to see enormous practical effects again in this age of CGI. Things get burned down with real fire, is what I’m saying here. Also, Mrs. Hudson flies. If you haven’t seen Without a Clue, you should.

Without a Clue finally comes to Blu-ray on March 31, 2015, courtesy Olive Films. The transfer is outstanding, a significant improvement over the DVD release, with most of the fading and over-exposure issues corrected. A light but just barely noticeable amount of film grain has been retained in the print, resulting in a lovely presentation that doesn’t look either over-processed or overly retro. The sound is exceptional, with a fine balance between score and dialogue. For more about the technical aspects plus some screen grabs, see Blu-ray.com.