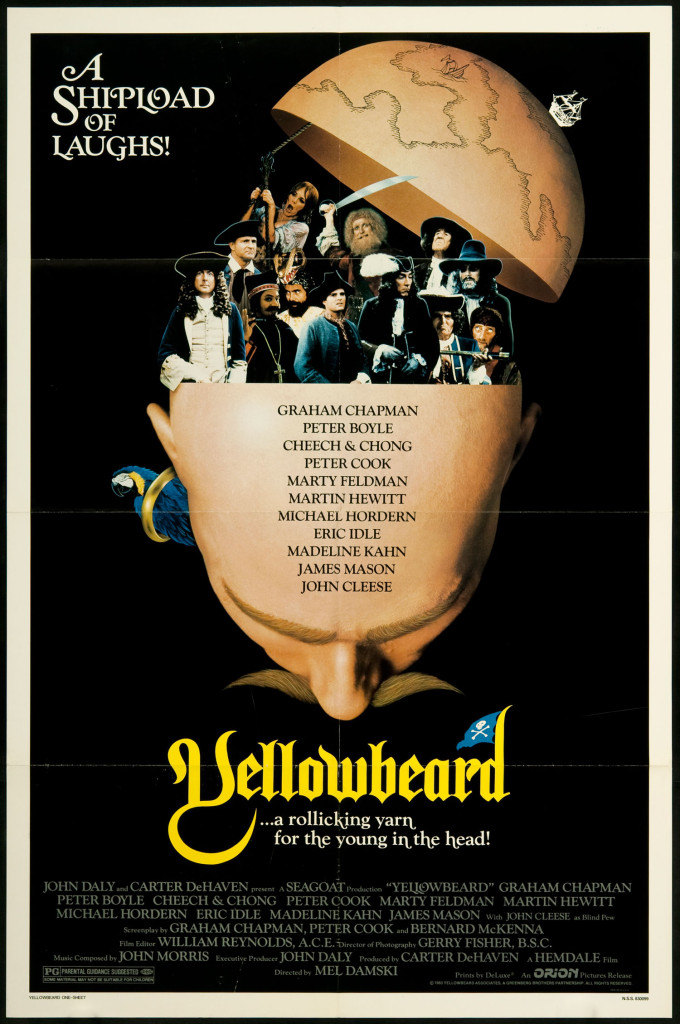 The infamous 1983 film Yellowbeard, a zany spoof of adventure-packed swashbucklers of yesteryear, is known for its unbeatable cast and unbearable lack of humor. Meant to be a wacky smash-up of classic British and American humor, instead it’s a schizophrenic whirlwind of confusion and mayhem. The bad kind of mayhem, unfortunately, the kind that happens behind the scenes and involves executives in polyester suits and rock stars without acting experience coming and going from production.

It’s the middle of the 17th Century, and the dread pirate Yellowbeard (Graham Chapman), after spending 20 years in a disgusting hell-hole of a prison for tax evasion, is due to be released. Instead, he’s informed by a commander in Her Majesty’s service (Eric Idle) that no one expected him to live so long, and they really don’t want to release him, so they’ve just tacked 140 years on to his sentence. Infuriated, he escapes, his sole concern the treasure he has buried but refused to reveal to the Crown. He’s hampered, only slightly, by his former conquest Betty (Madeline Kahn) and her news that he has a son, Dan (Martin Hewitt). Dan isn’t a pirate by nature, more of a scholar, but he has the treasure map tattooed on his head, so off he goes with his father, his step-father Lord Percy (Peter Cook) and Dr. Gilpin (Michael Horndern) in tow.

They’re pursued by the law, of course, as well as Yellowbeard’s old nemesis Moon (Peter Boyle) and Moon’s sidekick Gilbert (Marty Feldman). The treasure is on a tropical island ruled by Cheech and Chong, and all you really need to know about that little subplot is Tommy Chong can’t act worth a damn. I wish I could tell you all otherwise, my friends, but I can’t lie: his perf in Yellowbeard is one of the worst things I have ever seen. And I’ve seen The Maltese Bippy. 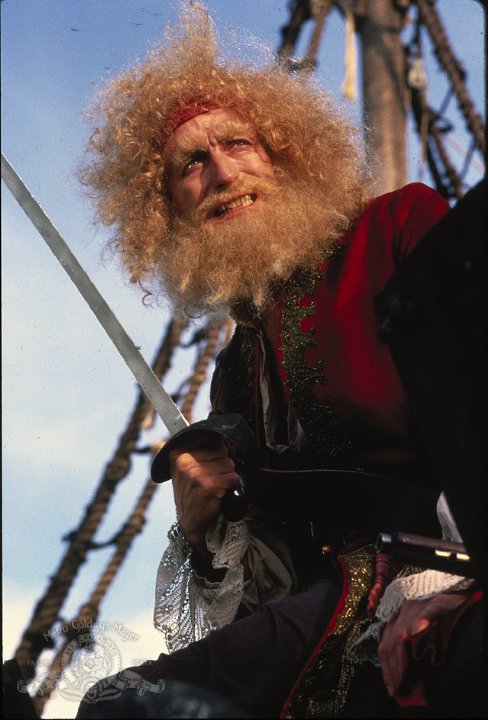 Yellowbeard is a complete disaster, but it’s a funny disaster, so it gets some love from the usual places. Now, it’s rare for me to place the blame entirely on one person for a bad film. Movies are a collaborative effort, and it takes a village to screw up a movie, as the proverb goes, but in the case of Yellowbeard, there are so many examples of funny jokes and good performances that fall flat, and from a host of people who have proven their skill time and again, that I have to give a little bit of the Philip J. Fry narrowed eyes to director Mel Damski. Damski has written a couple of blog posts about the experience of Yellowbeard. Very dishy stuff, and well worth the read.

There is more than one problem with Yellowbeard, of course. SPIN reported in 1987 that the film was edited without Chapman’s input or consent. Further, the idea for the film had been floating around for years, and was originally meant to star Chapman and his friend Keith Moon. Moon was unavailable — turns out, being dead limits your acting opportunities — but other rock stars, including Adam Ant and Sting, were attached to the project at various times.

Speaking of limited acting opportunities, the beloved and still-missed Marty Feldman died suddenly during filming of Yellowbeard, which understandably took the wind out of everyone’s sails, if you’ll forgive the pun. The film, which has some astonishingly inept special effects, the kind of thing you’d see in a film three decades older (Blackbeard, the Pirate, anyone?), was unable to convincingly deal with Feldman’s absence. There are scenes where his character is obviously missing, and other times when a guy who looks like Jeff Corey with a beard is doubling for him. There is also massive overdubbing in the film for nearly every character, Feldman’s most of all, and I’m not convinced that the funny voice he has, which is amusing enough, is always him.

As turbulent as production was, most of the cast seemed to be having fun. This quote from Idle, which has become the go-to quote about Yellowbeard, probably because it puts a positive spin on the whole thing:

…but making movies is making life experiences – and sometimes, the best times can be on the worst movies and vice versa, eg Yellowbeard, which I wouldn’t have missed for the world.

Yellowbeard spends too much time trying to emulate other films; you can see gags stolen from Holy Grail, The Meaning of Life, and Young Frankenstein, among others, and half-hearted attempts to do Python-ish things like have a couple of actors play multiple characters. The film never settles into itself as a result, but neither did the publicity. The posters for the film quite blatantly ripped off the posters for Monty Python and the Holy Grail. In the U.S., apparently the film was marketed as a Cheech and Chong movie, and in the U.K., as a Python-esque film. As anyone could have told you back then, and as anyone will tell you now, those two comedic groups do not mesh well. 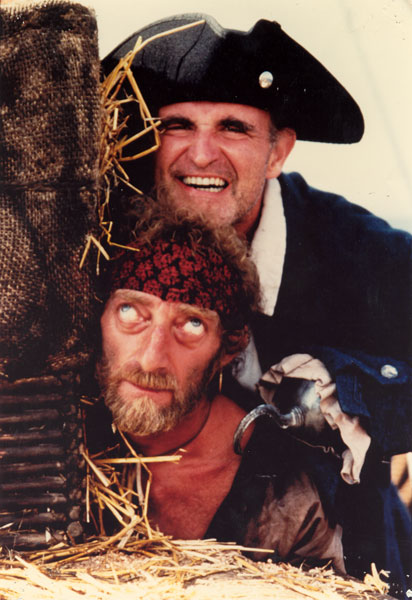 It’s such a damn awesome cast, though, you can’t help but want to watch this mess of a film. The British stars represent multiple generations of alternative comedy — Goons begat Fringe begat Pythons [1] — and had all worked together in some capacity prior to the film. There are lots and lots of character actors here, like Michael Hordern, Peter Bull, Bernard Fox, Nigel Stock, Ferdy Mayne, and I won’t bother listing them all because that’s what the IMDb is for, you lazy turnip.

There are plenty of guest spots, too. James Mason and Susannah York have small guest roles, as does John Cleese, who allegedly said the script was the worst he had ever read, but this is the man who wrote Fierce Creatures and appeared in Bullseye!, so let me get my salt shaker for you.

Cleese does give a fine performance, though, one of those solid turns that really stands out in a stinker of a film. York is the same, and the film only comes alive when she, Cleese, or leading man Graham Chapman are on the screen. The scenes with Idle and Nigel Planer range from good to terrific. Michael Palin is a narrator in the middle of the film, uncredited and not listed on the IMDb, but it’s him, and don’t question me on this because you will regret it. And finally, David Bowie shows up in a cameo that has coined the phrase “sex shark” here at Casa de la Stacia [2].

Unfortunately, there are some bad performances in Yellowbeard, too, the kind of bad performances that make you wonder if we as a culture should continue to encourage films being made. Tommy Chong is terrible, of course, and Stacey Nelkin will just set your teeth on edge. Martin Hewitt, a star of some of those early-90s straight-to-video erotic thrillers called Carnal Crimes and Night Rhythms that I pretend I don’t know anything about, and who has one of those Wikipedia pages that sounds like he wrote it himself [3], doesn’t give a bad performance, but it’s a role that seems as though it was written for a personality rather than an actor, and thus he has almost nothing to do.

If you’re interested in some screen grabs and tech spex, see the Blu-ray.com entry here. They talk quite a bit about flesh tones, which is no surprise: the while folks, which are a majority of the cast, have some bizarre pink-and-yellow tinting going on that appears to be a combination of poor makeup and sunburn. The skin looks worse on those who have a bulk of their scenes on the frigates, and Dan gets so tan he looks like a 1950s Hollywood movie stah.

The audio on the Blu is good, though the music blasts very loudly during no-dialogue moments in a way that I haven’t seen on a new release in a while. As for the fun of Blu-ray bringing out that which was not meant to be seen, you can count on pretty much all the makeup and wigs looking terrible, the costumes looking great, and the seams on Chapman’s eyebrows being really, really obvious.

Usually, I can wrap these summaries up by saying something that helps put everything into perspective, or at least I like to think I can do this, but in the case of Yellowbeard, I got nothin’. Fans are going to love this Blu-ray release, but the casual moviegoer may be as confused as I am.

***
[1] A highly reductionist thing to say. My apologies to those who are truly versed in the world of British comedy; I am a mere acolyte.
[2] Formerly Casa del Stacia, but I changed it a while back because no one ever got the joke.
[3] No shade intended. I’d write my own Wikipedia page, too, if I could, and it would be nothing but The Ultimate College Application Essay repeated over and over.