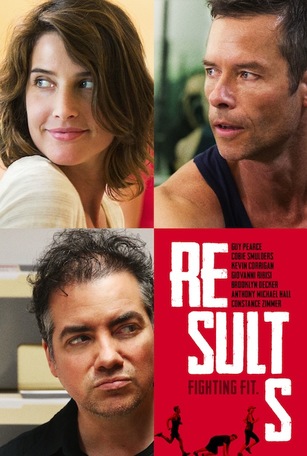 Disheveled millionaire Danny (Kevin Corrigan) turns to Power 4 Life, the local fitness center owned by the buff and seemingly together Trevor (Guy Pearce), ostensibly to learn how to take a punch. Bored and lonely, what Danny really wants is someone to hang out with, maybe smoke a little pot, and Kat (Cobie Smulders), Trevor’s most intense employee, surprisingly fits the bill, at least for a little while. She takes Danny on as a client, but between her casual relationship with Trevor and an ill-advised liaison with the frumpy millionaire, things start to get complicated.

It’s this complication that powers Results, the latest from mumblecore auteur Andrew Bujalski. Far more mainstream than any of his previous films, Results finds much of its comedy in the fact that Danny, Trevor and Kat don’t even realize they’re in a love triangle, and when they do, they don’t seem to know what to do with that information.

The trio are alternately appealing and awkward, their days full of isolation and long pauses, their minds constantly working at grimly earnest life goals. Kat is intense to the point of being inappropriate, Trevor equally so, though manages to be a little more personable about it. Even Danny, the puffy-eyed slacker, has a streak of ferociousness that makes one wonder just why he wants to learn how to take a punch. Their individual quirks are routinely handled in the film as being essentially equal, as though Trevor truly believing he could one day be a fitness guru is the equivalent to Kat shoving a client and screaming, “Fuck you!”

Results sees these as the same because it focuses on the emotion behind the actions, not the actions themselves. This works more often than not, such as in Kat’s violent outburst when Danny tricks her into coming over to his house for a romantic dinner, complete with a live jazz-pop trio hired for the occasion. But far too often, Kat’s behavior trends toward the psychopathic, and in a way that not only looks like a simple retelling of the “bitches be crazy” trope, but as though it were lifted wholesale and without finesse from a Coen Brothers movie.

In fact, much of Results is comprised of little bits and pieces snipped out of romcoms from decades past, then sprinkled with just enough mumblecore to intrigue but not frighten Middle America, and pasted back together into a safe and secure linear narrative, with a couple of moments of possible hallucination included to remind us just who directed the film. When Chekov’s punch is finally thrown, the tone of the film changes to pure Hollywood romcom, but Results is too clunky and self-conscious to really pull off what’s supposed to be a pleasant bait-and-switch.

Despite these missteps, Results has a keen ability to suss out the humanity in its lead characters, even when those characters are thoroughly irritating and doing their best to drive others away, usually unconsciously, sometimes not. Kevin Corrigan is utterly fantastic as a wayward schlub just barely able to keep it together; the things he wants aren’t the things that are the best for him, and his “pudgy and mellow” lifestyle is seen as undisciplined, of course. But as physically disciplined as Kat and Trevor are, the things they want aren’t any better for them than the things Kevin has aspired to, they’re just coated in the socially-acceptable veneer of fitness. Most of the fun of Results is seeing almost everyone around them, including their clients and Russian kettlebell master Grigory (a hilarious and perfect Anthony Michael Hall), seeing right through their bullshit.

Results is a refreshingly confident film. It has the assurance to step away from an important character for a while, and let long pauses play out organically. There is a great love for its characters and a real understanding of their struggles. Even if the happy ending doesn’t feel completely earned, it’s still a charming capper to a fun and unconventional romance.