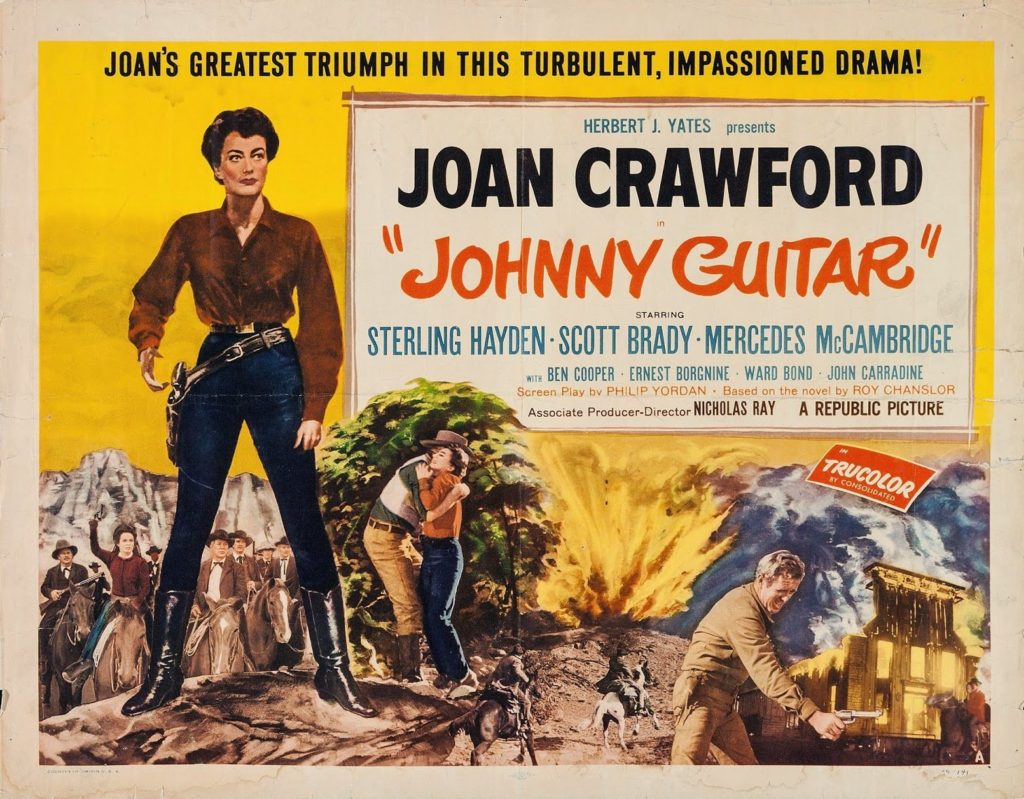 It’s just after the Civil War, and savvy saloon owner Vienna (Joan Crawford) knows her business, located outside the town of Red Butte, Arizona,[1] is prime land for the incoming railroads. Local banker Emma Small (Mercedes McCambridge) and politician John McIvers (Ward Bond) oppose the deal, partly out of greed, partly out of a misguided sense of moral righteousness. Enter Johnny Guitar (Sterling Hayden), Vienna’s former lover and a notorious gunslinger, to help her fight off the hostile townsfolk. No sooner does he arrive than Emma’s brother Len ends up dead, a crime Emma places squarely at the feet of Vienna, her friend the Dancing Kid (Scott Brady), and his gang. But Vienna stands up for him, and Emma vows to get her revenge. 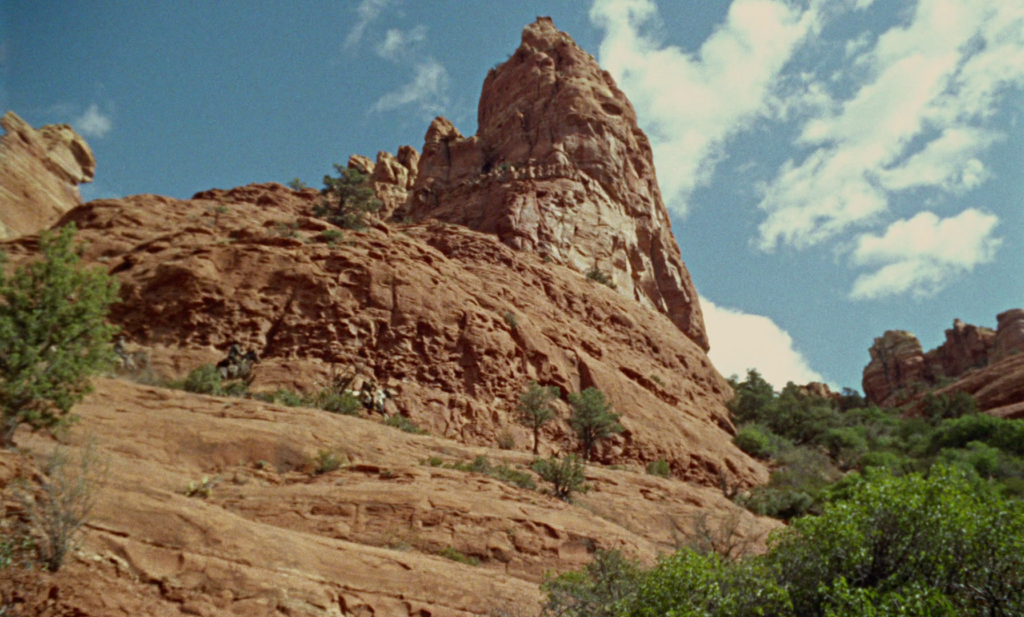 It sounds like a straightforward plot, but in Nicholas Ray’s Johnny Guitar, (1954), everything is a little off kilter, from the title character actually being a supporting player — Johnny does very little beyond sulk and snot off in a suspiciously meta manner — to the vague motivations of Emma to the strange pacing of the film. The pacing is surely meant to throw the audience off, especially during my favorite moment in the film: the fistfight that happens off screen. Johnny — the title character, remember — and Bart (Ernest Borgnine) go outside to resolve their Paypal dispute or whatever the hell it is that they’re all riled up about, because it’s not like you can even tell, but the cameras stay with Vienna and Kid, who stand around a blackjack table talking about their feelings. You can hear the punching and grunts outside, but the fight is almost over before we finally cut to the action outside, and even then we’re looking at it from a distance. It’s an afterthought, wholly unimportant and useless, and it’s tough not to see the scene as Ray’s commentary on the Western genre as a whole.

In fact, the film opens with a typical Western scene viewed from a distance: the stagecoach robbery, witnessed by Johnny from so far above the action he has no hope of being able to recognize the robbers, not that he really cares about the murder anyway. This comes moments after Johnny is startled by nearby explosions above him, workers trying to clear the way for the new railroad.

It’s surreal and dreamlike, the first of several events that Johnny witnesses but can’t quite believe. His first night there, Johnny, drunk and sulking like a 70s rock star, professes his continued love for Vienna, and they argue about whether their love was a dream or a “bad dream,” neither of them able to say the word “nightmare,” though Truffaut would likely say “hallucination” is more accurate than “nightmare.” The morning after, when Kid and his gang rob Emma’s bank, Johnny says it flat out: “Was I dreaming or did I just see a bank held up?”

It’s all very Shakespearean, as critics have been pointing out since the film was released, the theatricality enhanced by the implausible design of Vienna’s saloon, where nearly the entirety of the first half of the film takes place. Vienna’s is a wooden structure built right into the rock, boulders forming some interior walls, while the outside looks exactly like a set: fancy, overdone, completely incongruous and out in the middle of nowhere. 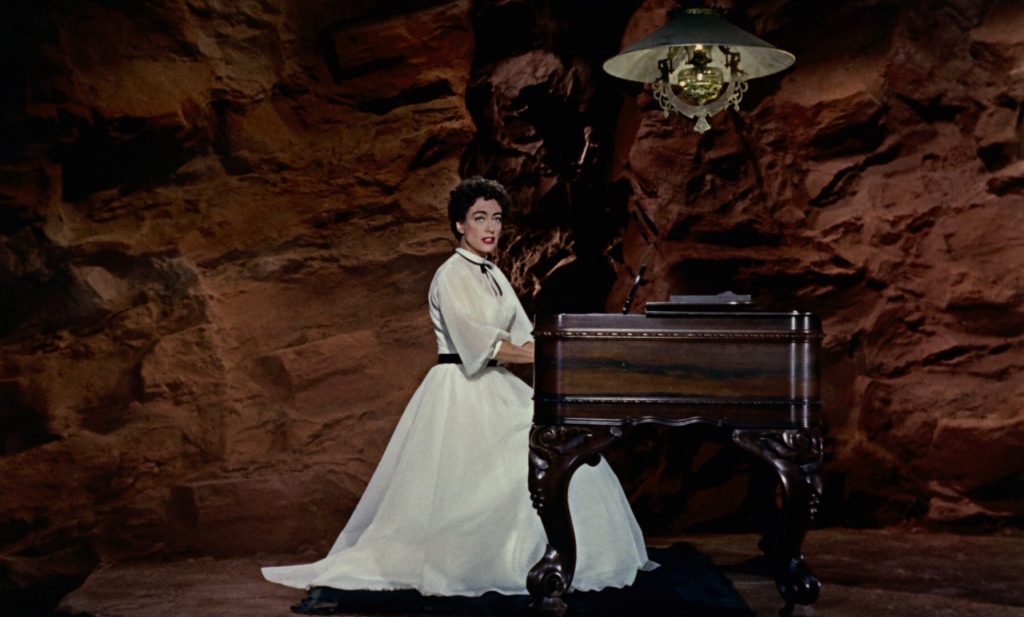 When we first see Vienna in this scene, it’s a long shot from across the room, very reminiscent of stagey, Gothic silent films. Also notable (to me, at least) is that I’ve been investigating an unrelated film with a famous scene that a lot of people appear to be remembering incorrectly; here, I notice that Vienna’s piano doesn’t have a candelabra, yet several books and articles about the film claim it’s there. False memory based on assumptions of Gothic imagery, I suppose.

It’s clear that Nicholas Ray does not in any way want to refer to the American West as it actually existed, only the American West and various character archetypes as they have been portrayed in Hollywood films. If that means taking a Shakespearean setting and adding some Gothic silent film aesthetics to it, plonking in a sharp-edged pre-Code businesswoman, a few gangsters (including Scott Brady, a dead ringer for Chester Morris, right down to the pomade), some hard-boiled film noir dialogue, and a whole bunch of meta references to Western clichés, then so be it — and who better to lead that glorious mess of an idea than the most self-referential and self-aware actress in Hollywood at the time, Joan Crawford.

Crawford’s performance is usually overlooked by critics in favor of discussion of the film’s strangeness, its symbolism, and the (frequently apocryphal) stories from co-stars who claimed she terrorized them all. We as a culture tend to excuse certain artists for their bad behavior if their work merits enough praise, and I think it’s high time we allow the same for Crawford in Johnny Guitar. This is a woman who understood the baroque tone of the film from the get-go, and also understood her unique place in Hollywood which allowed her to approach Vienna in a way no other actress could. 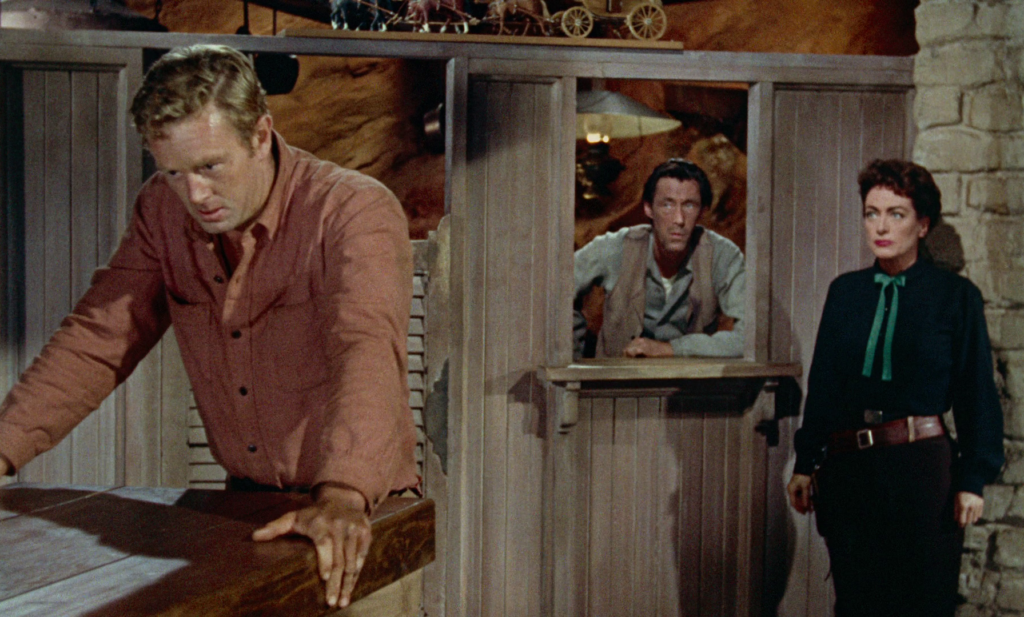 Vienna is eager for the spread of East Coast capitalism, which in the 1860s was based on the expansion of the railroad. This would lead directly to the economy of the 1920s and 1930s, portrayed in high-flying urban settings featured in dozens of pre-Code films. The reaction toward Vienna as a strong and shrewd businesswoman is a direct analogue to the way competent pre-Code businesswomen were considered: oversexed, masculine, lesbian.

Crawford almost never played characters of that type during her pre-Code career, however. She was a socialite in slightly odd circumstances, a secretary, a dancer, or occasionally a working girl with a heart of gold, but the stronger characters played by actresses like Stanwyck, Harlow, Chatterton and even Francis didn’t seem to interest her. Similarly, much of the theatricality of Johnny Guitar is based on early talkie and late silent aesthetics. There’s some Phantom of the Opera here, The Wind, The Passion of Joan of Ark, a little Flesh and the Devil, and again, Joan Crawford was part of the silent era, but not part of any of the films that would ultimately influence Johnny Guitar.

And I think that’s an important factor in Crawford’s performance here. You can’t have Johnny Guitar without the influences from earlier films, and what Crawford brings to the table is familiarity with the eras in question without any unnecessary baggage. Her performance is never informed by past experience in Gothic silents, as a wise-cracking dame, or even roles in Westerns.[2] She builds the character from the ground up, never imitating others, never giving up enough of herself to be imitable; she’s a statue and a force of nature all in one, and she’s magnificent. 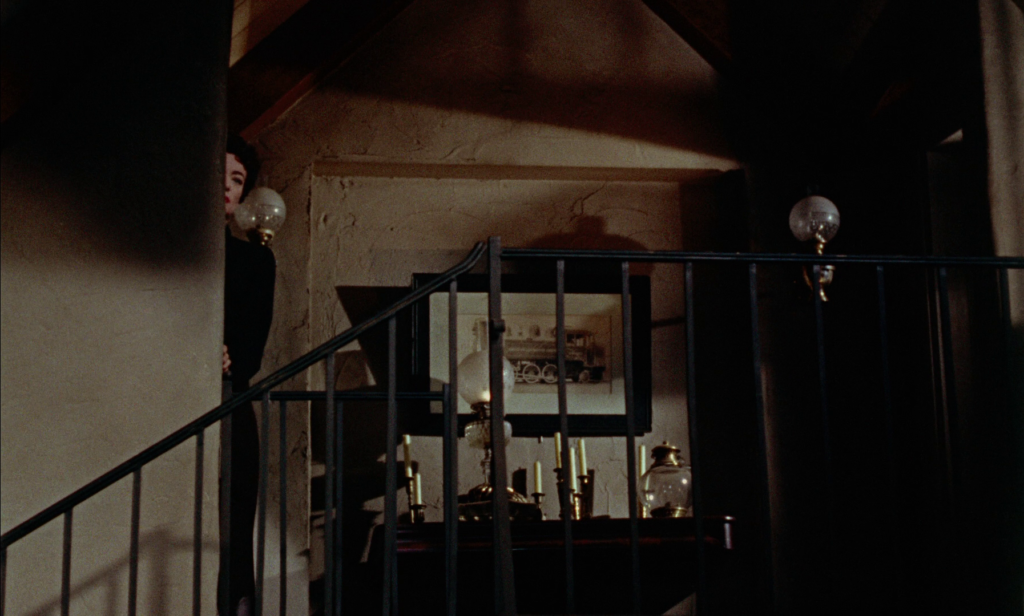 What makes Johnny Guitar great is that Vienna is the hardest character to get to know. We get the broad strokes of her life and her loves, but she’s walled off a significant part of herself as a defense mechanism, and replaced genuine emotion with melodrama and sentimentality. Meanwhile, everyone else is exactly as advertised: Johnny is “gun crazy” and for him, that means actually gun crazy; it’s not a euphemism (though one can hardly ignore the “left-handed” Dancing Kid’s interested up-and-down look at Johnny before offering to hire him on). Johnny Guitar really does play guitar; Emma Small is a small-minded woman; the Dancing Kid really does dance, and he acts like a child.

The parallels between the lynch mob and McCarthyism are equally obvious, as are the nods to fairy tales and Emma as the evil witch; she’s not only practically flying into the scene when she first arrives, but the familiar Wicked Witch of the West music cue starts up as Emma shoots down the chandelier in Vienna’s. 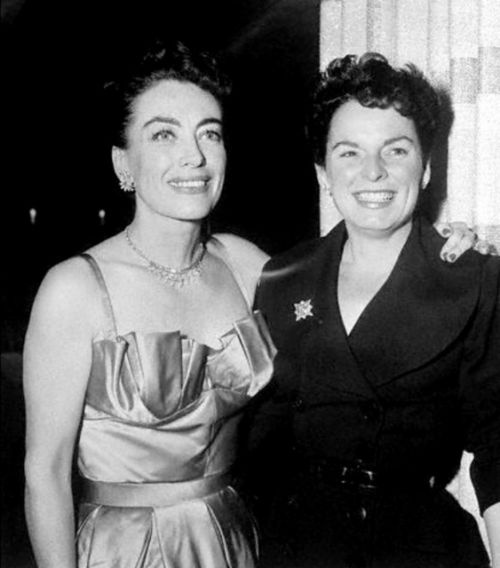 Discussions of Johnny Guitar are plagued by the constant question of why Ray (and Crawford) would make such a Western with women in the hero and villain leads, and to a great extent the answer is simple: Why not? There’s nothing about the Western that requires a white male lead, and besides, Johnny Guitar is a good story regardless of the gender of its leads. But be warned: once you watch Johnny Guitar, you’ll want to watch it again and again. It’s a tough nut to crack, full of contradictions and oblique symbolism and moments that you think are meant to be meta but you’ll never quite know for sure.

—
Sources:
[1] The name of the town is never said in the film, but the bank is called The First National Bank of Red Butte.
[2] 1930’s Montana Moon is barely a Western; it’s more of a romance that happens to be set amongst cacti.
[3] Bos (I call him Bos) once again fails to get it, something that happens so often I suspect it was no accident; he complains that Joan isn’t ladylike and that all the Western clichés are just noted but not expanded upon.
[4] You want to read this: http://altscreen.com/08/26/2011/thursday-editors-pick-johnny-guitar-1954/
[5] You also want to read this: http://www.joancrawfordbest.com/filmsjohnny.htm
All screenshots are from the original DVD or Blu-ray. While they accurately represent the quality of the film, some compression of the image may have occurred when formatting these screenshots for this article.