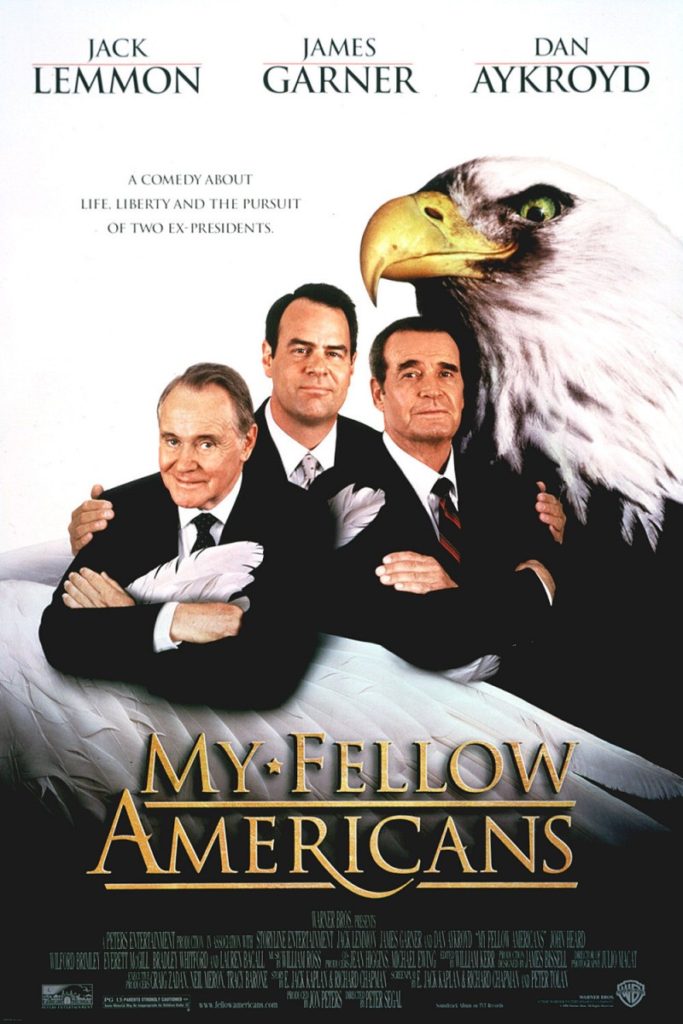 When President Haney (Dan Ackroyd) finds himself threatened with a major kickback scandal in an election year, he plots to blame two former presidents to save his own skin. This proves easier than he expected, since President Kramer (Jack Lemmon), a one-term Republican president from two terms prior, and President Douglas (James Garner), the single-term Democratic president Haney defeated, loathe each other, and their bickering blinds them to the strange doin’s going on around them. Only when they accidentally escape being assassinated thanks to their constant fighting do they realize that they need to buddy up and save themselves, and maybe redeem their lackluster presidencies in the process.

My Fellow Americans (1996) was originally meant to be another Walter Matthau-Jack Lemmon buddy comedy, but Matthau fell ill before filming began and James Garner took over in the role of President Douglas. It’s difficult to imagine Matthau acting as either a Democrat or a womanizer; he may have been a liberal Democrat in real life, but his attitude both in interviews and on screen was, by the 1960s, quite conservative, which it would almost have to be, given his curmudgeonly demeanor. Also, Matthau’s wild bachelor roles were starting to really push the limits of believability in the 1970s, let alone 1996, and I fear that Matthau with the same lines as Garner would have come across in a very unflattering way.

Garner is no spring chicken here, of course, but you get the very real sense that he possesses a reputation he is more than happy to live up to. It doesn’t hurt that Garner and Lemmon have a fantastic chemistry; My Fellow Americans makes you long for a universe where they co-starred in a 1960s bachelor comedy — something more Boys’ Night Out than Under the Yum Yum Tree, of course. 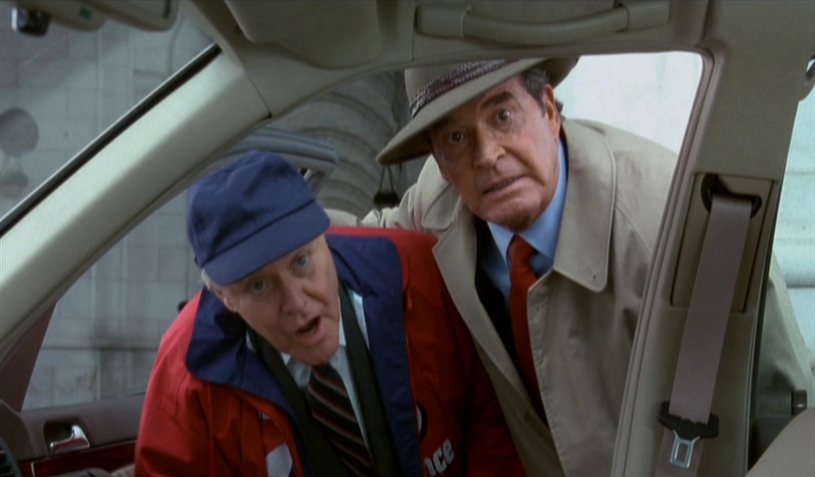 “I hope Walter is jealous when he sees us together,” Lemmon told Jeanne Wolf in 1996. “Jim and I really did hit it off. He’s actually quicker on the draw than Matthau – not necessarily funnier, but very fast. The most relaxed I’ve ever been working with other actors is with Walter and Jim.”

Twenty years after its release, My Fellow Americans‘ resemblance to Grumpy Old Men is not nearly as pronounced, and as such it wears pretty well, though extra entertainment can be had by reading old reviews of the film, all of which make the Grumpy Ex-Presidents joke, including the New York Times and Roger Ebert, who said he wasn’t going to do it but then did it anyway.

Though I pride myself on watching anything with James Garner in it — and I mean anything —  I had never seen My Fellow Americans, though I was sure I had done the next best thing: heard the whole plot from a clueless friend who had to tell everyone the entire story of every film she’d ever watched. I avoided watching this film because, hey, why watch it, she just told me the whole story for free, but it turns out the film she recounted to me was The Distinguished Gentleman, released four years prior to (and heavily copied by) My Fellow Americans; MFA also borrowed from Dave (1993) and — I promise I am not making this up — Patriot Games (1992), namely in the secret government shenanigans lead by awesome character actors Bradley “I’m Shirtless in This Movie” Whitford and Everett McGill. 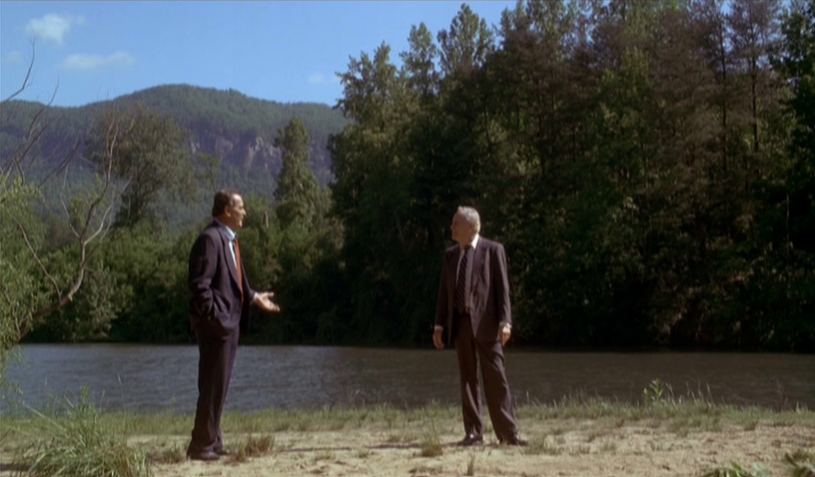 At one point, Douglas informs Kramer, “If I have to listen to you bitch, don’t be surprised if I beat you to death with my shoe,” which lead to an emergency pause-to-laugh situation here at Casa de la Stacia, then a lengthy conversation in which my husband and I discussed how hard it would be to beat a 70-year-old Republican to death with a shoe (verdict: not hard) and whether the Democratic beater being 70 years old himself would increase the difficulty (verdict: very much, yes). Actual discussion quote: “On the one hand, he’s 70, but on the other hand, he’s 70.” 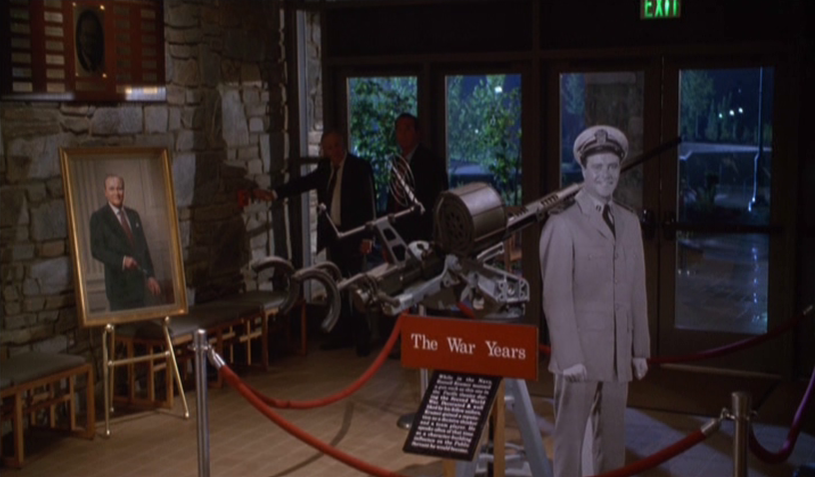 The IMDb mentions Lemmon really did serve in the Navy, but the photo used for the cutout in the presidential museum will be recognizable to film buffs as a photo from his role in The Wackiest Ship in the Army, slightly off-center tie and everything.

My Fellow Americans was directed by Peter Segal, who had just directed Naked Gun 33 1/3 (1994) and Tommy Boy (1995), and it shows. The film spends most of its runtime in shot/reverse shot format, and doesn’t do a great job of integrating all the scenes which were obviously shot separately. The two main female characters, played by Lauren Bacall and Sela Ward, seem shoehorned in and unnecessary, which is unfortunate on a lot of levels. 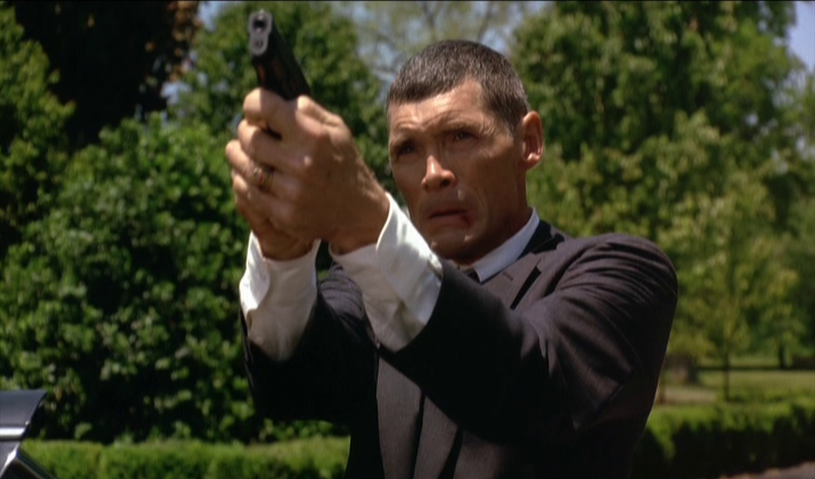 Everett McGill’s turn as a shadowy member of an alphabet agency is quite good, and I was shocked to see critics single him out as being the worst part of the film, because he is, in truth, one of the best parts of the film. He does the exact right thing the villain of a comedy needs to do: act like he’s in another film. He puts in the kind of perf that wouldn’t seem out of place in a mid-90s actioner, which does more for the rather specious plot than anything else in the film.

There are some solid cameos from Esther Rolle, Conchata Ferrell, James Rebhorn and stalwart TV character thesp Jeff Yagher, and John Heard is pretty good as the Dan Quayle-esque dippy V.P., but Ackroyd has nothing to do. 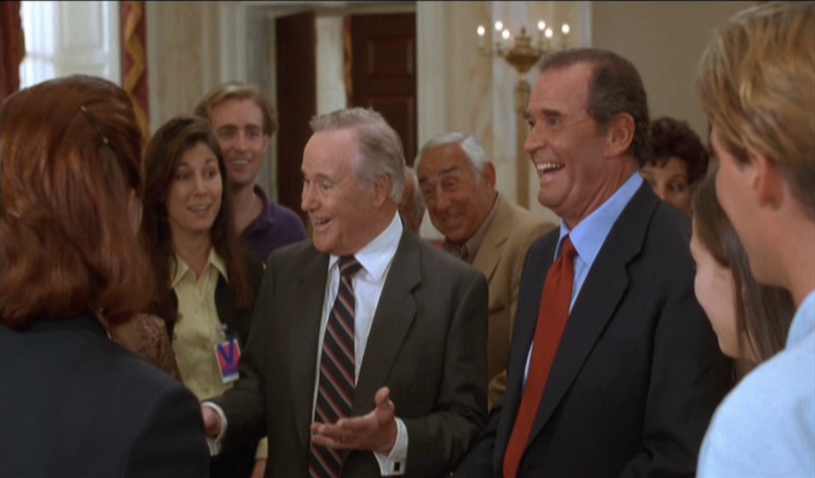 These guys, I swear.

The biggest flaw in the film — though the film is, admittedly, not the kind of movie you should even be looking for flaws in, because it’s light entertainment and doesn’t pretend to be anything else —  is that it isn’t particularly kind to regular folks. That’s kind of odd, since the moral center of the film is based on the notion that political servants need to remember they are working for the people, not for themselves. My Fellow Americans is exceedingly kind to its two leads, however, who are allowed to be charming and charismatic and fun, and whose sheer exuberance turns a strange tale about the attempted assassination of two former presidents into a delightful, lighthearted comedy.

My Fellow Americans has recently been re-released on made-on-demand DVD by Warner Archive. The disk includes the trailer and blooper reel, and looks to be the same release from a few years ago that is now out of print.