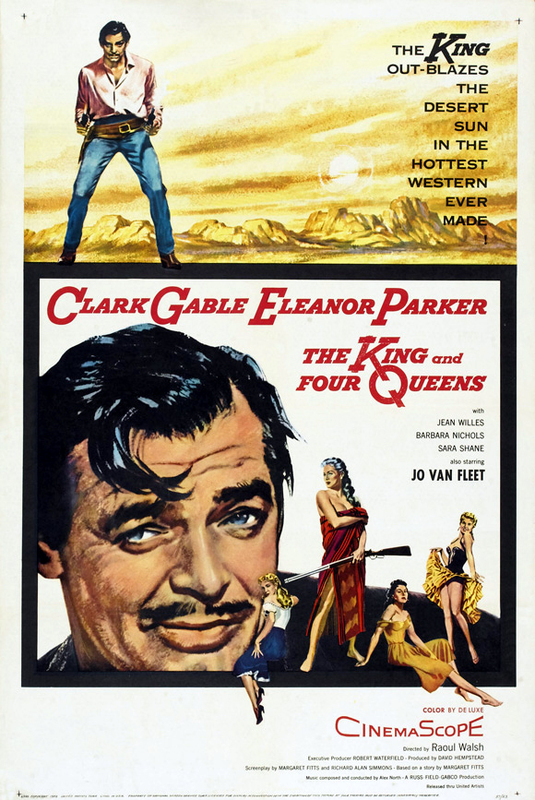 In The King and Four Queens, Dan Kehoe (Clark Gable) is an outlaw on the run who stumbles across a tiny Utah town and the tale of five women living alone in nearby Wagon Mount, guarding $150,000 in gold. Two years earlier, the four McDade boys held up a bank and holed up in Wagon Mount, but some idiot in the posse chasing after them accidentally set fire to a barrel of gunpowder, blowing up the whole town. Three of the McDade boys were found — or, should I say, charred bits of three of them were found — and the fourth brother presumably ran off.

No one knows who that fourth brother is, not even Ma McDade (Jo Van Fleet), who is living in the remaining buildings in Wagon Mount along with her four daughters-in-law, all of whom she’s keeping a close eye on to make sure they don’t go off and have sex with someone. They may not be widows, you see, and won’t know until the missing McDade returns if they have the right to their own lives or not. Kehoe’s arrival puts a wrench in the celibacy works, as you can imagine; he just wants their gold, the young maybe-widows just want in his pants.

Filmed in the beautiful St. George, Utah area and with cinematography by Lucien Ballard, The King and Four Queens is light on plot but full of gorgeous scenery. The setting was chosen by Clark Gable, who was familiar with the area from frequent hunting trips. Eleanor Parker as Sabina, the most mature and competent of the four maybe-widows, reportedly took the role so she could work with Gable, but she seems mostly bored. There’s little for her to do, and though she’s always a pleasure to watch, her relationship to that hidden gold — only Ma knows where it is — is obvious from the beginning, so there’s little to reveal.

There’s a clear parallel between acquisition of the gold and acquisition of the women, illustrated by the hilariously unsubtle visual metaphor of one of the dead brothers’ gold coins left behind with a hole shot through it. Kehoe takes this coin with intention of using it as his key to the burnt-out city of women, but he misplaces it almost immediately. Later, when Sabina pulls that same coin out of her pocket, he takes it, then moments later tosses a gold coin in the air and shoots a hole in it.

Well, maybe. The film never clarifies whether he actually shot a hole in the coin or not; it could have been a little sleight-of-hand. It’s meant to impress Ma, of all people, the one lady he doesn’t want to sleep with, which is an odd thing even considering her old-age makeup. Van Fleet is 14 years younger than Gable, and she just doesn’t look 60-something. But Gable sure as hell does, and more than once the film seems ready to go down the path of Kehoe seducing Ma, which doesn’t seem all that out of place. He never does, though; his attentions are entirely on the daughters. His age requires the daughters to all be in their 30s for the sexual tension to seem even slightly appropriate, though, which strains the plot even further, because one cannot imagine widows in their 30s putting up with the crap Ma is forcing on them.

The movie explains this away by framing the women as greedy, all waiting around for the one living brother to return just in case they find out they’re married to a great big pot o’ gold. This is a character flaw for them, you see. Not for Kehoe, who is pretty much a goddamned hero for wanting to cheat these women out of their gold. Why should broads have money?

The film also portrays the women as (unconsciously) waiting for a man to rescue them, though the only character that makes sense for is Birdie (Barbara Nichols). Sabina is more than capable, Ruby (Jean Willes) strong and determined, and Oralie (Sara Shane) a smart, well-heeled woman. I mean, Ma’s gotta sleep sometime, right? It would take nothing to wait until she fell asleep, tie her up, grab some rations and horses and get back to town, then to civilization.

Jo Van Fleet puts in a fine, if uninspired, turn as Ma, and Parker gives her standard Competent Woman perf, which is good enough for the film but I really wish she would have tried to steal the movie from Gable, because he deserved it. The rest of the performances range from adequate to dire, with poor Barbara Nichols faring the worst, frequently seen staring hard at the set as she walks toward her marks, getting herself in position, adjusting, then… acting! It’s not entirely her fault as everyone in the film is posed to a certain degree, the three “lesser” daughters especially.

Andrew Sarris talks about Walsh’s heroes showing a “pathos and vulnerability” in his films, though Gable shows nothing of the sort here, which is the film’s main flaw. If Gable could have pulled off vulnerable — and he usually couldn’t — his Kehoe versus the strong Ma McDade, not to mention the ultra competent and intelligent Sabina McDade, the film could have reached the sublime. As it is, with Gable plowing through the role like an oversexed 1930s matinee star needing to teach those uppity post-Code women a lesson, the film is just yet another 1950s manifestation of so-called traditional American values. Gable would follow this film up with Band of Angels, a film I will never forget because (a) Rex Reason, (b) I wrote my very first review on that film, and (c) I despise Band of Angels with every cell in my body. And some of your cells, too, which I took when you weren’t lookin’, because I need more body mass so I can more effectively hate Band of Angels. That’s why I drink so many protein shakes.

But we’re not talking about Band of Angels, we’re talking about The King and Four Queens, which is beautiful to look at but really more of an also-ran in this particular genre. Raoul Walsh reportedly didn’t like the script and joked to his friend Sam Fuller that he wanted to trade films; Fuller was directing Run of the Arrow in nearby Snow Canyon. Gable, meanwhile, was somewhat enthusiastic about the film, having just left his MGM contract behind. He was enjoying his newfound economic freedom by producing his own films for a company he co-owned with Jane Russell and her husband Bob Waterfield, though this appears to be the only film he produced; some sources claim this was due to his health. [1]

The King and Four Queens is now available from Olive Films in a lovely Blu-ray that includes the trailer and English subtitles — good ones, too, which you can’t always say about releases nowadays. The picture is gorgeous, with some of that blurry you get in CinemaScope prints, which I really like for some reason, as much as I love the grain of a gritty 1970s movie. The sound mix is great and the music, which I found overbearing on a TCM showing a few years ago, is very good here.

—
[1] When Hollywood Came to Town: A History of Movie Making in Utah by James D’Arc
All screenshots are from the original DVD or Blu-ray. While they accurately represent the quality of the film, some compression of the image may have occurred when formatting these screenshots for this article.