George and Martha are America’s first couple, two well-pickled, middle-aged cynics whose marriage has devolved into a series of games, cruelties and comeuppances. They’re so dedicated to making each other miserable that they can’t stop even when guests are around, but that doesn’t stop them from inviting people over anyway, especially when they want to sniff out the fresh meat. Enter young Nick and Honey, the former being the handsome new professor teaching at George’s college, the latter his meek and dutiful wife. With plenty of angst and booze to loosen the tongue, the two couples spend a horrifying evening together, exposing the kinds of secrets and lies and truths that most people spend a lifetime trying to hide.

Starring the preeminent supercouple of the 1960s, Richard Burton and Elizabeth Taylor,  Who’s Afraid of Virginia Woolf? is a faithful adaptation of the stage play by Edward Albee. Literary and cinematic romance is always fraught with struggle; you have to fight for it or sacrifice, and even if it seems solid, there will be conflict you have to resolve. This is taken to its absurd yet logical extreme in Woolf, and in the fantastic, horrible and campy way only Edward Albee can conceive it. Critic Richard Schickel wrote in Time that the film excelled in ways the play could not, where the characters were merely “mouthpieces for Albee’s clever savagery,” while in the film the two couples existed beyond the frame.

Blonde cinematic It Boy George Segal co-stars as Nick — a name I like to pretend is Albee’s little zing at Hemingway — the dull but scheming young professor with more ambition than self control. He arrives with his wife Honey (Sandy Dennis), who is far more game for some nasty shenanigans than her appearance would let on, though she does tend to vomit and pass out more than one would expect from a hearty partygoer. What gets dismissed by everyone in the film as her fragile health is, I think to most in the audience, a perfectly understandable reaction to the grotesqueness around her. 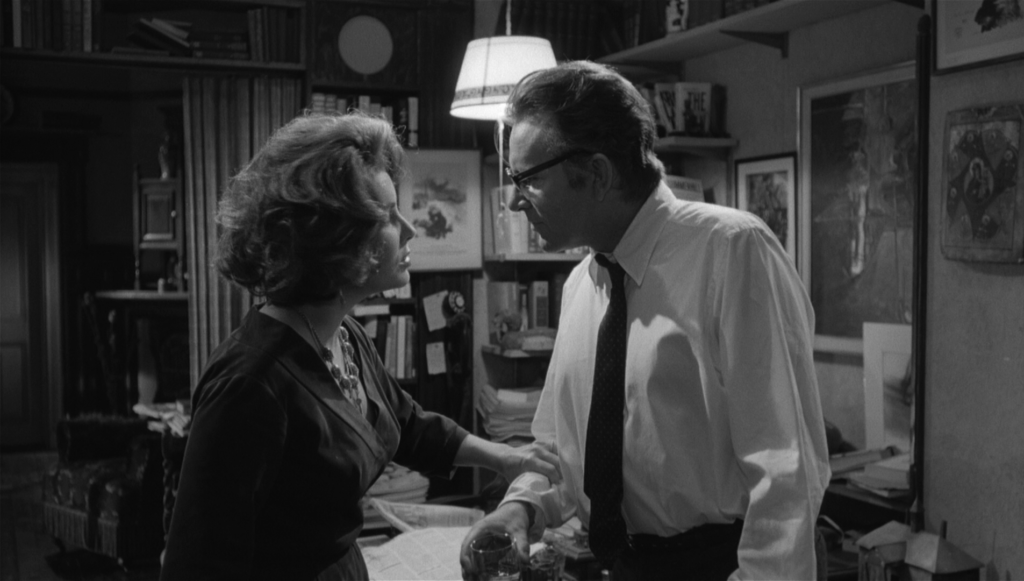 Critics were universally kind to Who’s Afraid of Virginia Woolf?, praising not only Mike Nichols’ direction but Haskell Wexler’s schizophrenic and glorious cinematography, not to mention the performances. Burton was frequently singled out as putting in a brave performance by shrugging off the masculinity he preferred to imbue his characters with, though I think this praise is a bit misguided, as the George of the film is far more muscle-bound (metaphorically, mostly) than in the play, and not always to good effect.

It’s Taylor who does her best work here, giving a stellar example of what someone of limited range can achieve. I love Taylor, I think we all do, but she had a certain range of roles she could play convincingly and Martha is sometimes a little too much for her. That’s picking nits, however, as her performance is one of the finest of the era, it’s just that the character is so complex that sometimes the seams of Taylor’s craft show. 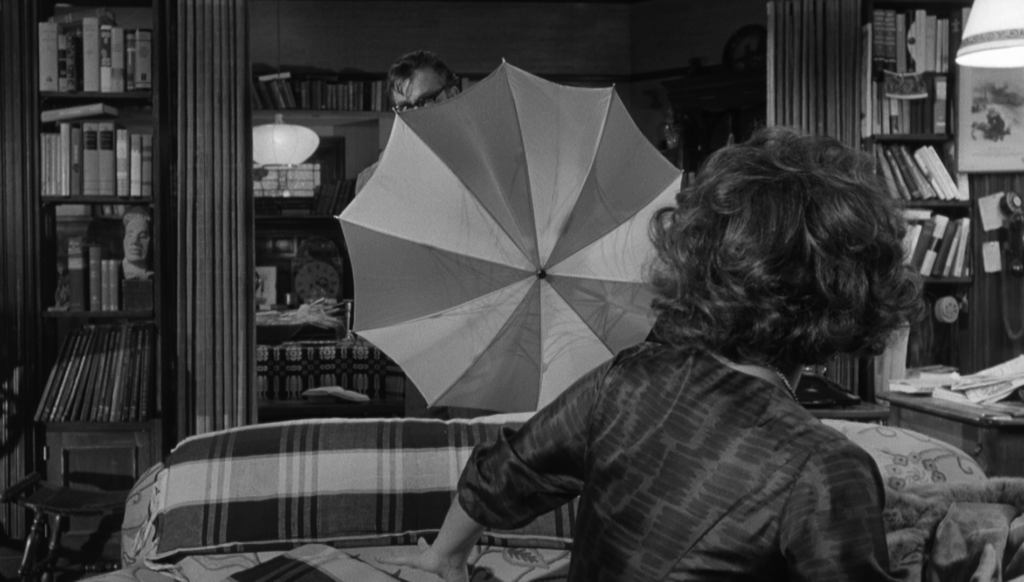 I would argue that Honey is equally complex, and Sandy Dennis, frequently and unfairly dismissed as “fine” or “competent” in reviews, brings just as much out of the play as Taylor does. Look closely for Honey’s little reactions and her genuine desire to play along with the psycho mind games around her. My favorite of these moments is when we first see her, that knowing smile when she first walks in just as Martha screams “Fuck you!” at George.

Well, it’s not “Fuck you!” in the film. It is in the play, and Nichols changed it to “Screw you!” for the film, but Warner Bros. studio head Jack Warner put the kibosh on that, changing it to “Goddamn you!” in post production. You can still see Taylor’s mouth saying “screw you” if you look quickly enough, however. A second change — the removal of the word “frigging” — went far more smoothly as Martha wasn’t on screen when she said it, so a little dubbing got the job done.

Still, there was plenty of profanity to go around, including a “go screw” that makes the change for the earlier “screw you” a real head-scratcher, especially since the “go screw” was uttered in the service of a much nastier bit about Nick’s slight case of whiskey dick. For the most part, the studio’s hands were tied when it came to the script, as Nichols refused to shoot “protection” footage in case certain bits were censored. After the film’s release, he told Life Magazine that he felt the language was both terribly human and terribly important, and besides, innuendo was often nastier than the actual words. [1] 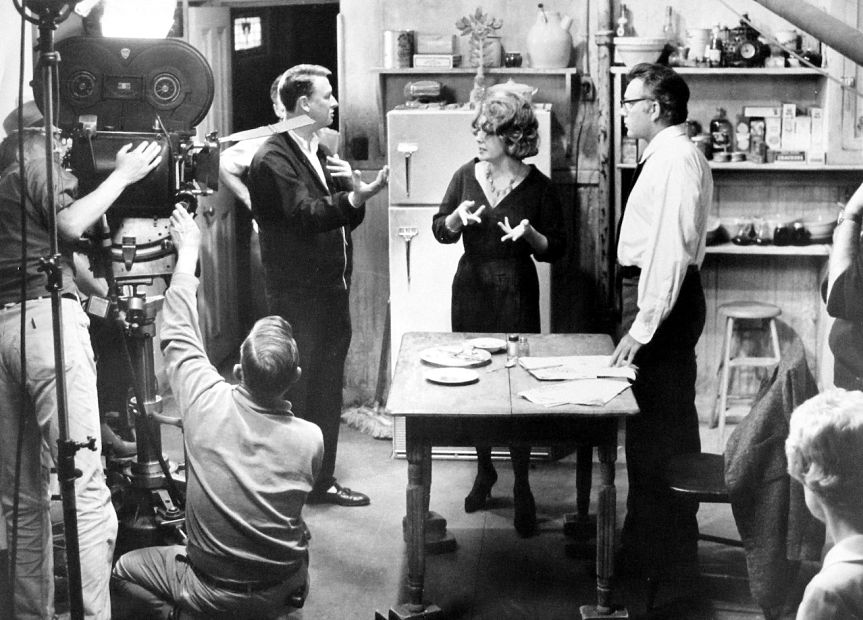 The Production Code Association would not approve the film as it stood, but Jack Warner countered by saying the studio would distribute film with a notice prohibiting anyone under 18 from entering the theater without a parent. He didn’t outright say he would release it without a Code seal, but heavily implied it, and forced the PCA’s hand. This was in part because the industry at the time was very resistant to the idea of ratings, which Warner’s under-18 notice would be seen as, and also because the new PCA president, Jack Valenti, was concerned with making the PCA less strict and more modern. Valenti ended up agreeing on using the notice and having the PCA grant an exception for the film. [1][2]

There’s an amusing bit of trivia in all this: At the time of Woolf’s release, the PCA was still stinging from giving leeway to Kiss Me Stupid in 1964, only to have the NCOMP — the new name for the Legion of Decency — condemn the film, almost out of spite. When the PCA refused to approve Woolf, the NCOMP again went the other way, approving it and making the PCA look like an outdated, overly conservative group.

Most of the profanity and coarseness in the film is Martha’s, of course. I hold very little hatred for Martha, despite the general consensus amongst the public, seen even in the advertising, that Martha is evil enough that she has to be stopped. That’s not to say that I automatically disagree with anyone who sides with George, who has decided that their most insane game, a bit about their son, needs to go, despite Martha’s protestations. But early on when Martha is telling a humorous but embarrassing story about George and he gets his revenge with the umbrella gun, Martha is impressed. She laughs along with him, seems to agree with the unstated tit-for-tat rules of the game, and kisses George, but he’s having none of it. He becomes cruel and deliberately eggs her on, pushing boundaries and escalating the situation unnecessarily. 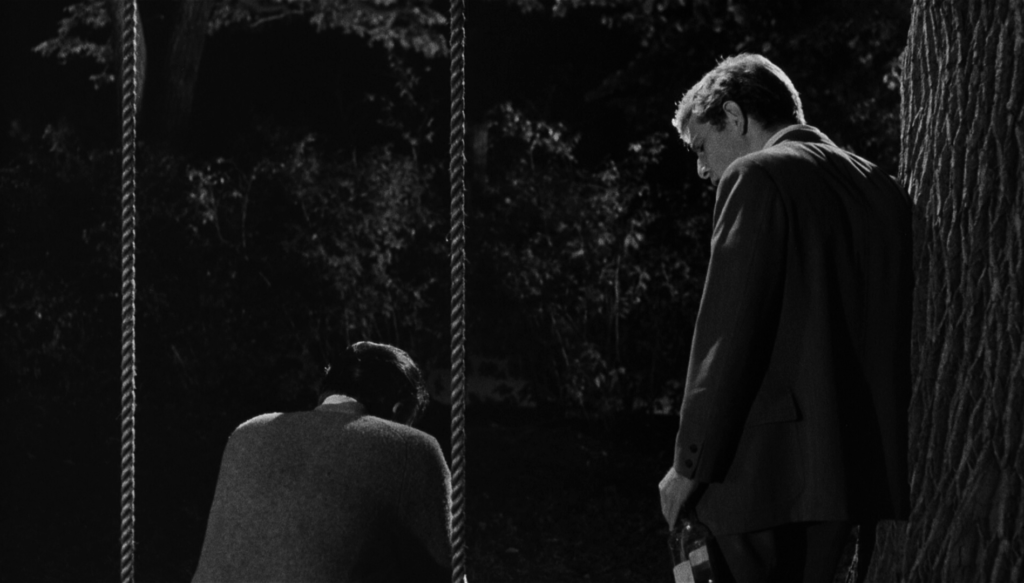 Was that the “snap” moment Martha refers to later on? It’s possible. George’s crap about her being a monster and her “once a month” attempts to paint herself as misunderstood are easy to classify, but at the same time, the film doesn’t necessarily disagree with George’s iffy accusations. Woolf seems to skirt the edges of the idea that Martha really is morally obligated to be the bigger person here, to understand that she’s threatened George’s masculinity and should back off because she’s crossed a line. As the film continues, there are obviously plenty more lines to be crossed, but George is forever stinging from what he perceives as emotional emasculation dating back to before the film even opens.

The film (and the play) never judge Martha as irredeemable, but they do both judge her more harshly than George, mostly because George is comparatively calmer. That calm though, especially in that moment where he threatens to have her committed (just who does he think he is, some alcoholic Modernist author with an inconvenient wife?) is horrifying, something that many critics and viewers seem to miss, or seem to at least shrug off as less lethal than Martha’s profanities. Such an idiotic, human thing of us to do, isn’t it? Get scared because Martha shows her cleavage and calls guys bastards, but feel oddly comforted by a cardigan-loving professor being a snobbish, sexist asshole.

Honey is also judged more harshly than Nick, both by Nick and George as well as by the script. The emotions and accessibility of the women are criticized, especially in Honey’s dark secret: her lack of desire for children. It should be noted that the play indicates George is sympathetic to Honey’s fears when he discovers what’s been troubling her; in the film, Burton plays it more as revelation than sympathy, which I think undermines his final round of Get the Guests, s little sub-game he calls “Bringing Up Baby.” George is willing to sacrifice the brittle Honey to save his wife, an act that is more powerful if he sympathizes with Honey than if he’s indifferent to her plight.

The failures of the women in Woolf are reflective of the time in which it was made, which is ironic, considering this was very clearly intended to be an indictment of America’s sociocultural clime. It succeeds as being timeless far better than almost any other social consciousness film, and certainly is one of Albee’s best in this regard, but the need for the play to destroy Honey and Martha is telling. Also telling is the constant use of publicity photos of Martha screaming and baring her teeth while a meek, professorly George looks on; this tendency seems to be exaggerated when it comes to modern novelty re-casting of the roles for high-profile photoshoots. It says a lot about how we see the film decades on and how irresistible the easy stereotypes are. Who’s Afraid of Virginia Woolf? takes a little work and a willingness to dig into the parts of your subconscious you probably want to leave alone, but it’s worth it.

Who’s Afraid of Virginia Woolf? has been recently released by Warner Archive in a MOD Blu-ray with all the features of their excellent DVD release, including ommentary by director Mike Nichols and guest Steven Soderbergh, commentary by cinematographer Haskell Wexler, and more. This is a fantastic release, probably the best of their Blus so far. If you’re interested in tech spex, you can’t go wrong with Blu-ray.com’s 5-star review.

—
Sources:
[1] Albee: Who’s Afraid of Virginia Woolf? by Stephen J. Bottoms
[2] Movies in American History: An Encyclopedia, Volume 1 edited by Philip C. DiMare
All screenshots are from the original DVD or Blu-ray. While they accurately represent the quality of the film, some compression of the image may have occurred when formatting these screenshots for this article.