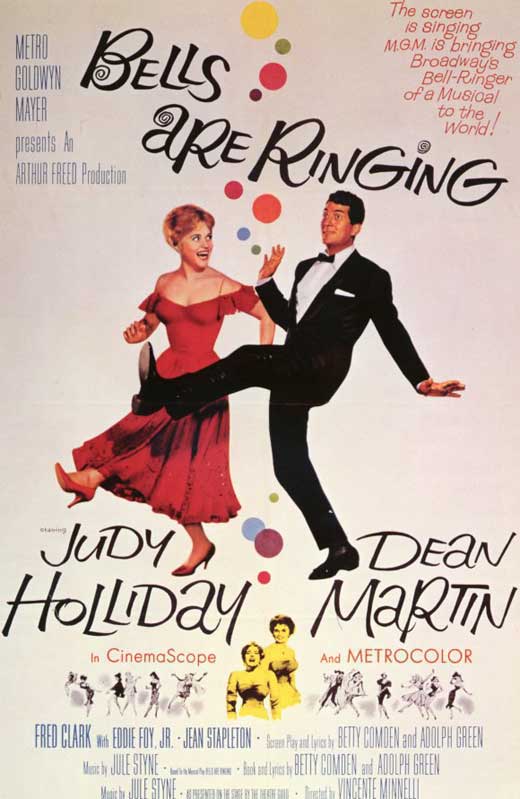 Feisty, optimistic Ella (Judy Holliday) loves her job as an answering service operator for Susanswerphone — it’s a step up from her previous gig as operator and occasional model at the Bonjour Tristesse Brassiere Company. She’s forever meddling in the lives of her Susanserphone clients, much to the dismay of her boss Sue (Jean Stapleton), but her meddling is always to their benefit. One particular client has captured Ella’s fancy: Jeff Moss (Dean Martin), a playwright whose long-time writing partner has recently taken off on his own, leaving Jeff insecure and unsure of his own talents. Without having ever met him, Ella is sure that he just needs a little encouragement, and creates a persona she calls “Mom;” when Jeff is feeling down, “Mom” calls and gives him a boost.

Complications arise when a police detective looking for a promotion (Dort Clark) starts to investigate Susanswerphone, sure that it’s really a front for an escort service. Sue insists Ella needs to stop getting involved in their clients’ personal affairs, but she secretly defies this order and meets with Jeff, though under an assumed name. She winds up becoming his muse, as well as the muse for a host of other clients, all while a bookie (Eddie Foy, Jr.) tricks Susanswerphone into helping him with his own mostly illegal activities, and the whole thing gets just as wacky as you would expect it to get.

Bells Are Ringing (1960) had been a hit Broadway musical starring Holliday and the handsome Sydney Chaplin (Charlie’s son, not brother). Both Holliday and Chaplin won Tonys for their performances, and Holliday was a major Hollywood star at the time, so once the play ended its Broadway run, it just seemed natural to make it into a movie. MGM replaced Chaplin with popular singing star Dean Martin,  hired the premiere Hollywood director of musicals at the time, Vincente Minnelli, and took this chirpy little musical to the big screen.

Frank Gorshin as a beatnik needing a little advice from Judy Holliday in beatnik drag. The girl on the left reading a book is Elizabeth Montgomery in an early role.

But it was 1960 and there was a lull in the American musical movie market. It was the era of rock ‘n’ roll (and, it should be noted, calypso, which was briefly assumed to be the next big thing after rock), and unless your musical starred Elvis Presley or Marilyn Monroe, there wasn’t a guaranteed market for it; just a couple years later and the market would be reborn with the beach party genre. Bells Are Ringing in this climate was considered distinctly old-fashioned, and as if to prove the point, an extended sequence featuring already outdated stereotypes of beatniks was left in from the original 1956 play, while other sequences that would probably have worn better were removed due to time constraints. 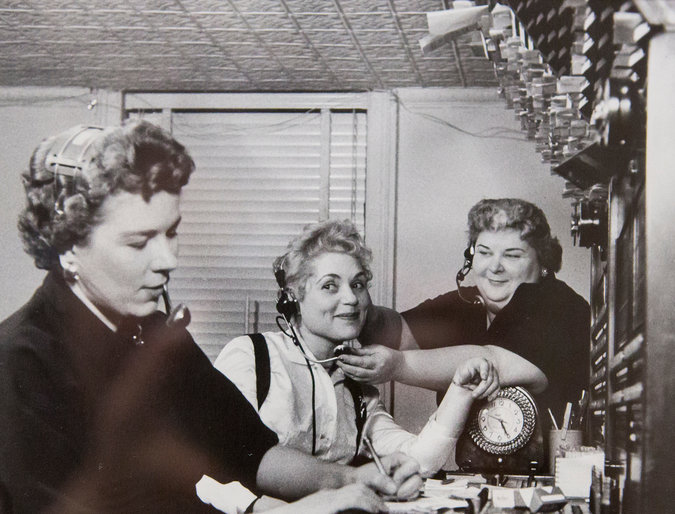 The character of Ella was based on Mary Printz, founder of the Belles Celebrity Answering Service. Here Judy Holliday is training as an operator with Printz (left). Photo courtesy a fantastic article about the Belles in the New York Times.

Holliday probably didn’t need that training, as she had worked as an operator for John Houseman’s and Orson Welles’ Mercury Theater in 1938. That was the same year she met Adolph Green and Betty Comden and became a member of the Revuers, as well as part of the left-leaning New York theatrical community. This would lead later to her being called before HUAC; Harry Cohn came to her rescue in what was perhaps the only instance of a studio backing a star in such a situation. Her testimony was a masterpiece of double talk, subtle jabs and possibly even perjury, done to protect not only herself but her friends who had been put into this unforgiving position.[1][5]

Holliday was immensely popular at the time of Bells Are Ringing, both on stage and screen, despite nearly being blacklisted. The filming of Bells was not without its troubles, however. Holliday didn’t like the changes to the script, and even though she liked Dean Martin, she wasn’t sure he was taking the role as seriously as he should.[2]

Worst of all, she was probably already ill with cancer by the time filming began, and certainly was by the time it was released. [2] Around that time, she’d been having trouble singing in her new play “Laurette,” and went in for throat surgery to remove a tumor; while the tumor was benign, it was discovered she had breast cancer, and she went in for cancer surgery soon after.[3][4] Bells would be her last film.

Bells Are Ringing is a real treat of a musical. Personally, I’ve always found Holliday’s change in demeanor between her acting personality and her singing personality to be a bit jarring. The timbre of her voice changes, her posture and bearing change, and every line is illustrated by an accompanied facial or vocal change to mimic what she’s singing. In Bells, this is hardly noticeable at all, because it fits so well with her character and the plot; I’d put Bells up there with Born Yesterday as roles which were absolutely perfect for Holliday.

Even if Holliday wasn’t sure about Martin’s work ethic, it’s undeniable that they made an adorable couple on screen. Martin is pitch perfect as the playboy on the verge of a nervous breakdown, the kind of guy who knows every famous person on stage and screen and yet manages to be the kind of wide-eyed naïf who believes in fairy tales and guardian angels. And Judy Holliday is, well Judy Holliday. She’s amazing.

This would be MGM’s last musical produced by their famous “Freed unit”, and the film ultimately wound up losing money, despite getting rave reviews and being nominated for an Academy Award.

Hal Linden (who had been the understudy for Chaplin during the Broadway run) sings “The Midas Touch.”

And since we’re pointing out famous actors in bits parts, here’s Donna Douglas on the far left in the beige gown. She has a prominent role in the chorus of “Drop That Name.”

Warner Archive has recently released Bells Are Ringing in a MOD Blu-ray with some great special features, including a 11-minute featurette, the two deleted musical numbers “Is It a Crime?” and “My Guiding Star,” the outtake version of “The Midas Touch”, English subtitles and the theatrical trailer.

—
Sources:
[1] A Hundred or More Hidden Things: The Life and Films of Vincente Minnelli by Mark Griffin
[2] Dino: Living High in the Dirty Business of Dreams by Nick Tosches
[3] Promise Me by Nancy G. Brinker
[4] Laurette Taylor, American Stage Legend by Lynn Kear
[5] Unfriendly Witnesses: Gender, Theater, and Film in the McCarthy Era by Milly S. Barranger
All screenshots are from the original DVD or Blu-ray. While they accurately represent the quality of the film, some compression of the image may have occurred when formatting these screenshots for this article.