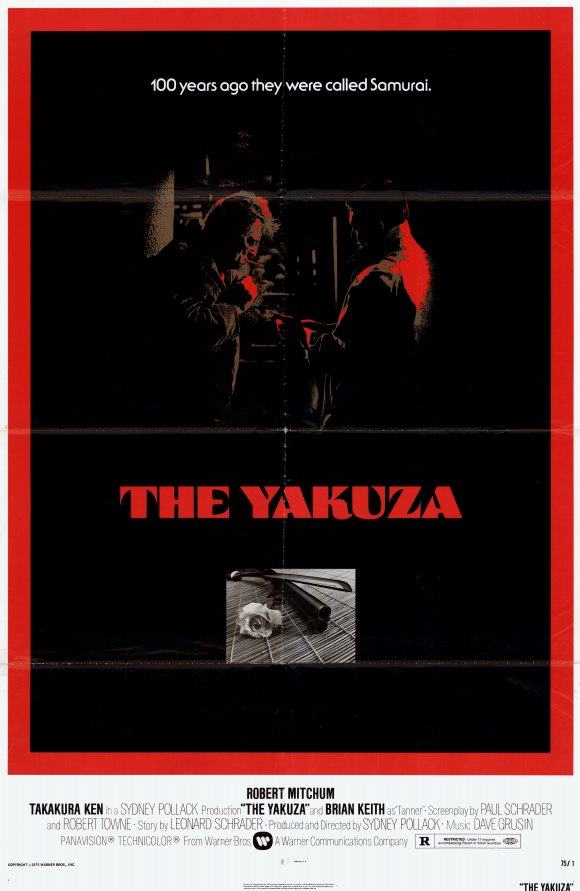 World-weary retired detective Harry Kilmer (Robert Mitchum) is asked by his former Army buddy turned businessman pal George Tanner (Brian Keith) to help with a sticky situation he’s gotten himself into. After making a sketchy deal with a yakuza clan, George lost the weapons he promised to send them after accepting a sizeable chunk of change and has no way to get replacements. He tells Harry he’s offered to work with them on the situation but they won’t listen, and in retaliation, have kidnapped Harry’s college student daughter, who had been staying in Tokyo. George pressures Harry into contacting Tanaka Ken (Takakura Ken), the brother of Harry’s former girlfriend Eiko (Kishi Keiko). Harry once saved Ken’s life, but the two men dislike either other intensely. Ken is former yakuza himself and knows he will be in danger if he gets into yakuza business again, but his obligation to Harry overrides yakuza tradition. They rescue the girl quickly enough, but the real danger is in protecting Ken, Eiko and Eiko’s daughter (Christina Kokubo) from the yakuza.

The Yakuza is a strange little mash-up of neo-noir and yakuza-eiga, one that didn’t do well at the box office at the time, but which has made it a cult classic in the years since. It works in part because yakuza films in the 1960s and 1970s were borrowing heavily from American gangster films, so it made sense for gangster films to start borrowing back. But the American translation, if you will, of yakuza-eiga to neo-noir doesn’t allow for the kind of violence the Japanese films were (and are) known for, which I think may prevent The Yakuza from enjoying a larger modern audience. Critics were pearl-clutchy about the violence in 1974, and maybe still are today, to an extent, whereas I think most of us who have seen Japanese gangster cinema will be surprised at how light the violence is, comparatively speaking.

Robert Mitchum’s trademark complete lack of caring plays very well onscreen in films noir, as I think we all know, but also here plays as respect for another culture, which the character Harry certainly has, but it’s a little uncertain whether Mitchum does. It’s not that his personal views are an issue, but that, in the few moments in the script where Harry asks questions about Japan, the seams start to show in Mitchum’s performance. His line reading is more wooden and he’s not convincing in the least. With Mitchum, though, who knows why that happened. Bad day, didn’t like the script, the interns couldn’t make a decent pot of coffee, who knows. Pollack later said in an interview that Mitchum was like “a powerful and lazy horse” who wanted “to walk as slow as possible” and “get away with doing as little as possible,” something those of us who have seen his infamous interview with the late Robert Osborne know all too well: “He was about as pleasant to interview that day as Attila the Hun,” he later recalled.

Those unconvincing moments are few and far between, thankfully. There are solid performances all around in the film from the leads, and including Richard Jordan as a skeezy-cool henchman and veteran actor Okada Eiji as the angry mob boss. The Yakuza does an admirable job, especially considering the year it was released, in respecting Japanese cultural and, to a lesser extent, cinematic tradition. There’s a white guy (Herb Edelman, of all people, though he’s surprisingly good) there to explain the culture, of course, but much of the traditions are illustrated by Japanese actors or explained by the Japanese characters, thus dispensing with the typical “filtering” of culture through the eyes of a “trusted” white person. There are some missteps, such as continuing to “reveal” bits of Japanese culture long after it’s no longer necessary to the plot or atmosphere, and the (probably inevitable) association of irezumi with sex and sexual deviance, but overall the film will likely impress a modern audience.

Sydney Pollack: “I was concerned with trying to get on film the essence of this character who had been marinated by life, which is the feeling you get when you look at Mitchum’s face. You have the sense of a man who has seen it all and been through it all.”

Warner Archive has released The Yakuza in a made-on-demand Blu-ray with English subtitles, commentary by Pollack, and a vintage featurette titled “Promises to Keep.”