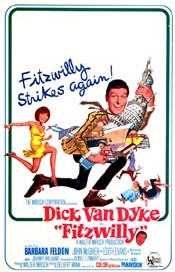 The holidays may be almost over, but there’s still time to talk about one of my favorite Christmas movies, “Fitzwilly.”

As usual, this post contains spoilers. This probably won’t be a problem for you, though, as “Fitzwilly” is a notoriously difficult movie to find. Released briefly in 1998 on VHS, never on DVD, and only rarely shown on TCM, it’s likely you’ll never even see this film.

And that’s a shame, too, because “Fitzwilly” is a charming light-hearted romantic comedy that never pretends to be anything else. It’s simple and refreshing, and probably one of the few “family friendly” movies I’ll ever review here.

Charles Fitzwilliam is “Fitzwilly” (Dick Van Dyke), indispensable butler to the slightly batty, wealthy, philanthropic and elderly Miss Vicky (Dame Edith Evans). At first Fitzwilly seems like the perfect butler, but soon we realize there’s a layer of deception surrounding him. While ordering expensive silverware from a local luxury store, Fitzwilly dons a fake name and feigns a British accent — Van Dyke sounds just like Michael Caine here, with his accent much improved over the iffy accent he used in 1964’s “Mary Poppins” — and has the silver sent to a false address. He repeats this with different items in different shops, and his contacts in the mail rooms of all the largest department stores in New York happily intercept these packages and relabel them to be sent to the St. Dismas Thrift Shoppe, a fake thrift store that’s really storage for all the stolen loot. Most of Miss Vicky’s staff is involved, and they prove to be quite adept at faking identification, letters, business cards, and telegrams for the cause.

Early on it’s revealed that the money raised by this stealing is used to fund Miss Vicky’s charities. Her father, an apparently horrible and irresponsible man that even kindly Miss Vicky hated, died several years earlier and left her exactly $180.00. Fitzwilly and the upstairs maid Grimsby (Anne Seymour) at first pulled a few capers to quietly raise money for Miss Vicky to live on, so she didn’t have to know she was ever broke. When it became clear that she was intent on giving to worthy causes, the capers soon increased to fill that need. Grimsby stopped participating in the schemes, and chastises Fitzwilly for not just telling Miss Vicky that she has no more money to give. Fitzwilly doesn’t want to stop stealing from the rich; “I’m just so good at it!” he explains.

Trouble for Fitzwilly and his band of thieves arrives in the form of Juliet (Barbara Feldon), a lively and beautiful Columbia University graduate student hired to help Miss Vicky with her new book. Miss Vicky wants to write a reverse dictionary, a compilation of misspelled words with their correct spellings listed. Juliet turns out to be perfect for the job as she can’t spell; Roger Ebert’s 1967 review of the film notes that, since Juliet cannot spell, “She must have been attending the Columbia Graduate School of Journalism.”

Fitzwilly doesn’t want an “outsider” in the home, and discourages Juliet from staying. Juliet is bright and observant and stubborn; within minutes she knows Fitzwilly is up to something. This revelation isn’t important, however. In fact, the plot isn’t that important, either. In “Fitzwilly”, it’s not the destination that matters, it’s how we get there. The dialog is snappy and amusing once Juliet arrives, making a somewhat dull film delightful. When the door to Miss Vicky’s mansion opens and Juliet is greeted by the sight of Fitzwilly, she exclaims, “Oh! I’ve never seen a butler in full rig before. Are there many of you left?”

When Juliet lets Fitzwilly know that she’s certain he’s up to no good, and that she doesn’t want to hear any more of his “buttery butlery lies,” he relents and lets her stay on as Miss Vicky’s secretary out of sheer spite. The rest of the staff is concerned that this will breach security and cause difficulties for their new scheme.

The new scam is rather simple: Byron Casey, son of a footman at another manse nearby, is an interior decorator who was given $150,000 to decorate a home. However, he spent some of the money on “a personal matter” and is now in a panic. He needs Fitzwilly to furnish the home with $150,000 worth of furniture on only $75,000. Fitzwilly agrees and promises the staff that Juliet will not get in their way. They set to work on the plan while also making sure Juliet has no time to snoop around the house.

Juliet is obviously going to stay, as Miss Vicky is quite fond of Juliet and the dictionary for people who can’t spell is coming along well. No longer just a list of difficult words, it is now peppered with Miss Vicky’s own definitions: “A psychiatrist is a doctor to whom you tell things that you wouldn’t tell your own mother, and if you did, she would have the common decency not to believe you.”

Meanwhile we, and Juliet, learn more about Fitzwilly’s character. Juliet was decidedly unimpressed with Fitzwilly initially, confused that a college educated man would choose to be a servant in an unchallenging job, yet she starts to soften when told he sends bibles 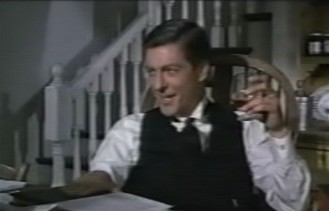 and notes of comfort to families of the recently deceased. What she doesn’t know is he and the staff scour the obituaries and send families a “leatheroid” King James bible, hoping for contributions to their fake charity “Serenity Through The Word”. He also uses the bible for a “Samson and Delilah” hustle at local bars, betting people that Delilah isn’t actually the one who cuts Samson’s hair. He’s right, of course, and the hustle earns them a few hundred dollars.

He is also the troop leader, along with Miss Vicky, of The Platypi, a group of neighborhood boys from the richest families. A young Platypus explains that they are a “manly and virtuous” group, committed to good deeds, and “opposed to almost every sin – we hate reefers, girls, and gin.” The multi-talented Fitzwilly composed that motto just for them.

Juliet, of course, eventually throws the thieves into a predicament by catching the footman Arthur stealing a check from a man leaving Miss Vicky’s home. The man had been visiting on behalf of a charity and Miss Vicky had given $20,000 to his cause. Juliet returns the check to the man, and talks to the footman about his problem. Arthur, a fallen former minister, reveals his shame at his compulsion and receives compassion from Juliet.

After the loss of $20,000, Fitzwilly decides Juliet has to go, and determines to scare her off by hitting on her. She agrees to a date, though, and within minutes they’re kissing. This is a 1960s romantic comedy, which means that seconds later they’re fighting. Juliet decides she can’t work in the same house with him anymore. Again, this is a romantic comedy, and Fitzwilly is obviously not as happy about his plan working as he should be. 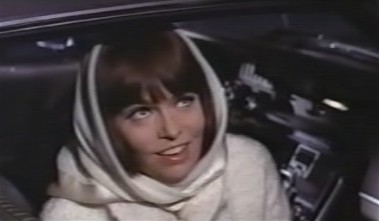 After a heist at Abercrombie & Fitch makes the papers, Juliet realizes just what Fitzwilly has been up to all along. She pries the information out of Arthur and finds herself far less moral than she imagined, deciding that Fitzwilly’s theft ring isn’t that big of a deal, as it’s “just insurance companies” who get harmed. Fitzwilly clearly knows that doesn’t excuse a thing.

Juliet and Fitzwilly declare their love for each other, and immediately — as in the next sentence — start talking about marriage. Juliet demands he quit his life of crime, however, thanks to Juliet’s accidental interventions, the $75,000 they were to earn from the house furnishing plot has already been spent by Miss Vickie on several charities. Fitzwilly decides he has to do One More Job to keep Miss Vickie set for life.

The job is to rob Gimbel’s of their cash on Christmas Eve. Through a series of blocked doors and distractions provided by some unaware Platypi, and while dodging a former victim of one of his scams, Fitzwilly manages to get upstairs to the offices and pretend to be an insurance man who has come to secure the money off premises. It all works as planned until Albert, in a fit of redemption, decides to turn himself in. To save Albert from being charged with a serious crime, Miss Vicky gives $190,000 to Gimbel’s to reimburse them for what was stolen. While she believes Arthur had nothing to do with the theft, Fitzwilly of course knows better, and knows the $190,000 stolen will have to be returned to Miss Vicky’s account so she never finds out what really happened.

Lest we forget this is a cheery holiday movie where all ends well, we discover Miss Vicky’s dictionary — really more of an eccentric biography of her hideous father — has sold for $500,000. And now, we presume, everyone lives happily ever after.

“Fitzwilly” was based on Poyntz Taylor’s novel A Garden of Cucumbers, and is one of the first films Van Dyke starred in after his run on “The Dick Van Dyke Show”. It met with mixed critical notice on release on December 20, 1967. Some reviewers found it pleasant but dull, while others positively hated it. That it’s not available now is somewhat odd, but I presume this is because it’s not very well known. Someone on the Usenet group rec.arts.movies.past-films once speculated the failure of the film was that people didn’t want to see Van Dyke in the role of a scoundrel, but he’s hardly offensive at all. Yet the inclusion of Arthur, a fallen minister who stole from the donation plate at services, and the use of the bible in two prominent hustles, could have offended — especially in a Christmas movie, which is what “Fitzwilly” was marketed as. 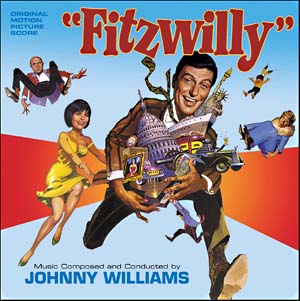 Barbara Feldon was already well-known and in the midst of her co-starring role in “Get Smart” during the filming of this movie. Feldon was quite good in the film, confident, competent and charming, and it’s almost inexplicable that she wouldn’t have another film role until “Smile” 8 years later. The film is also notable as one of John William’s first movie scores (he’s credited as “Johnny Williams”), as one of Dame Edith Evans’ few film roles — this was the same year she appeared in her award-winning role in “The Whisperers” — and as the first appearance of actor Sam Waterston.

“Fitzwilly” appears occasionally on Turner Classic Movies. It was last aired in December, 2006, which is when I fell in love with it (and author/blogger Jack Pendarvis became momentarily obsessed with it). Old VHS copies are available, but before you shell out big bucks, remember that the VHS copies are pan and scan, and the copy I saw already had some major color loss, despite it being less than a decade old. We need to pester TCM en masse to release the film on DVD.

Have a good weekend everyone, and I’ll see you next year.