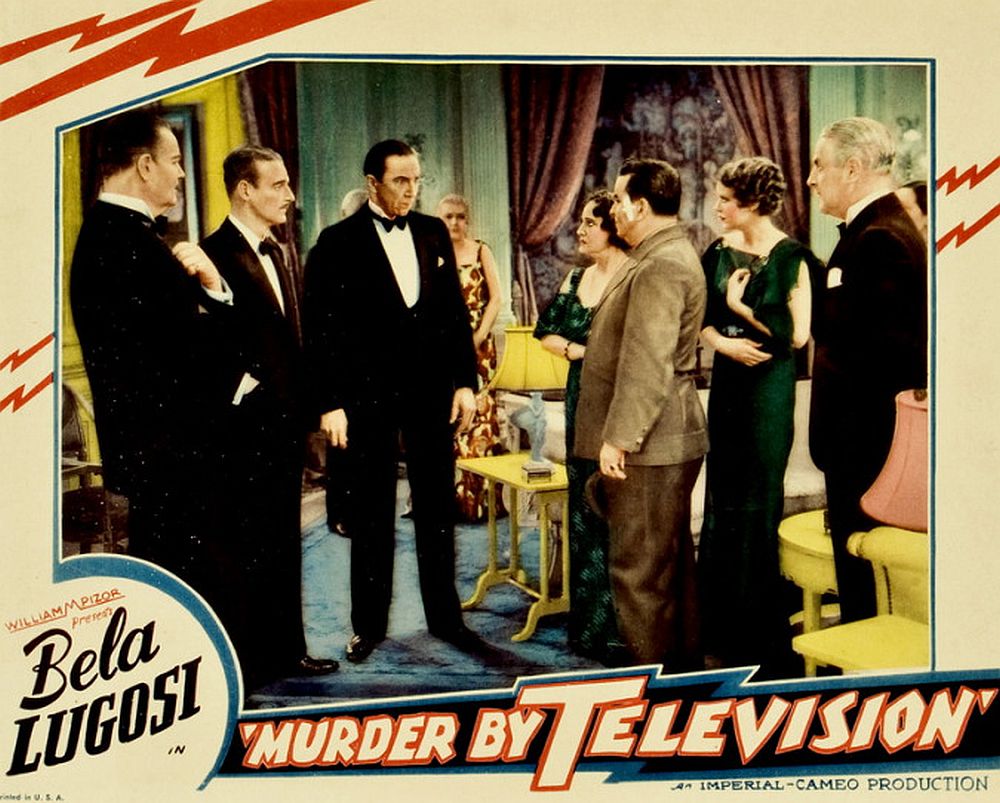 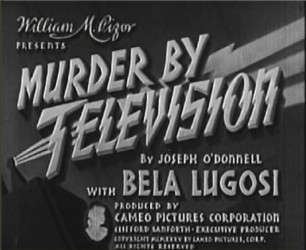 Murder by Television is a public domain mystery movie shown occasionally on TCM and available in various compilation sets. This 1935 z-grade flick starring Bela Lugosi is a well-known cult favorite. My first impression of the movie was that it was a very early talkie, possibly made in 1929 or 1930. I was surprised to find it was made as late as 1935; many of the bad elements of early sound movies are present in this low-budget film. There was little music in the soundtrack and I swear I saw props that were hiding microphones. The entire movie was shot with static cameras and stiff-as-a-board actors plastered to their marks. The majority of the characters were rich white folk sporting formal dress and fake British accents. 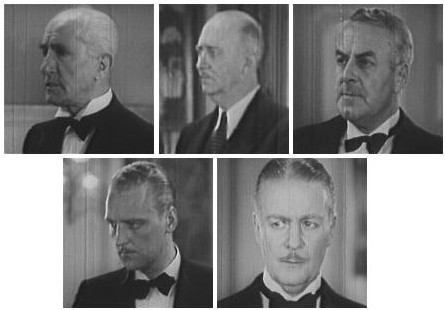 As you can see, they managed to get a cast of men who all look alike. Bravo.

There’s quite a bit of confusion about the plot in online reviews of Murder by Television, and it’s no wonder. The plot, simply put, stinks. The film is a convoluted whodunnit with what I suppose is a hint of science fiction thrown in the mix, although I am perhaps too kind. The movie begins with James Houghland, an inventor who has created what is essentially satellite television. Arthur Perry (Bela Lugosi) is apparently Houghland’s representative, and knows that some sneaky capitalist swine want to buy Houghland’s invention and make gajillions of dollars. Perry tells the capitalist swine that Houghland won’t sell his invention for anything, he wants to use it to better mankind, not simply to make money.

Meanwhile, a man who looks exactly like Perry sees Perry’s face in the newspaper and hatches a scheme. Both Perry and the lookalike are played by by Lugosi, of course. The lookalike somehow manages to procure the exact same suit as Perry without knowing anything other than what was in the paper, and returns to the capitalist swine’s office pretending to be Perry. He says Houghton now will sell his television invention, and takes the swine’s money.

At a fancy party, Houghland reveals his invention. Everyone gathers around an enormous big screen TV and watches a crystal clear image, live from various countries around the world. Because of the poor print it’s hard to see, but the photo to the right is of a man adjusting the image on a huge television with a live image from Asia being broadcast. These images are shown without live sound, but Houghland is narrating. 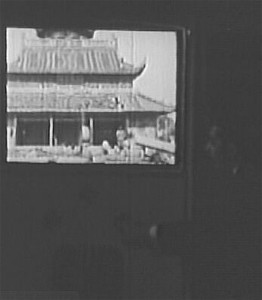 It’s interesting to note that we didn’t actually achieve this kind of visual technology until the 1950s or 60s. To see what television was really like in 1935, see this gallery and this site for examples. Televisions were tiny screens in large wooden cabinets that resembled radio/record player sets of the same era. There were no big screens or clear images. When this movie was made in 1934, images on television looked like this baseball game, as shown on the fantastic early TV history website Framemaster.

Houghland is on camera in another room in the mansion, narrating these impossible images, when he suddenly grabs his chest and falls to the floor. The guests panic and don’t do anything because they are ineffectual twits, and only Perry goes to the camera room, where he discovers Houghland dead. Perry is seen taking some papers, which provides the only bit of intrigue in the movie, as you don’t know if it’s really Perry or the lookalike. Finally Houghton’s wife and daughter enter the room and, as is typical for early 1930s murder flicks, neither seem much bothered by their dead loved one on the floor.

A police inspector shows up, determines Houghland was killed by a blow to the head, and questions everyone. Why no one questions him is beyond me: there was no blow to the head. I know. I rewound. Twice. And presumably the guests know this as well, since they were all watching the television when Houghland fell to the floor, but no one mentions it.

The questioning of suspects begins a segment of the movie I like to call “Racist Stereotypes on Parade”. The Houghland’s butler is Ah Ling (Allen Jung), a Chinese actor sadly forced to quote Charlie Chan and Confucius constantly. Jung delivers his lines with almost no trace of an Asian accent at all, which makes his faux Confucian broken English platitudes all the more unlikely. The maid is Isobel (Hattie McDaniel), who spends all her time rolling her eyes and shouting “Lawdy lawdy!” There’s also an Irish cop, inept of course, with a thick brogue.

During questioning, Isobel is asked about her whereabouts for a few moments. She gets embarrassed and the inspector lets her go, with a comment about how he understands what’s going on. Unfortunately, the audience has no idea; was Isobel in the bathroom? Making sweet love to her man? Whatever the reason she was too embarrassed to say where she was, she leaves the inspector’s room only to ask the Irish cop, “Is my face red?” The joke being that she’s black and therefore cannot blush.

It’s all so very, very sad. 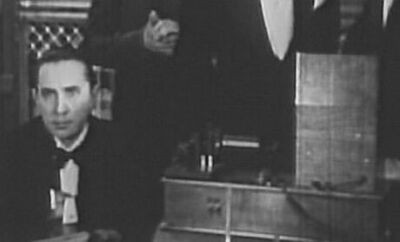 The police inspector can’t figure out who might have murdered Houghton, so one of the guests, Doctor Scofield (played by improbably-named actor Huntly Gordon), retrieves his “brain apparatus.” Scofield is also an inventor and the apparatus is one of his inventions. Simply put, it reads everyone’s brain.

This “apparatus” — seen here next to Lugosi — is a large wooden box with some whatnots and fiddly bits glued to it. It somehow proves every one of the house guests’ brains are incapable of murder. Sound idiotic? It is. Scofield says of brains that, from person to person, “the only significant difference is the size, and scientifically, that has no significance.”

Of course, the inspector believes everything this so-called apparatus reveals. No one is allowed to leave the home and eventually Perry ends up dead. Minutes later Isobel arrives in a panic, screaming “Lawdy lawdy, I done seen a ghost!” and falling to her knees. She’s seen Perry, who was supposedly dead; Houghland’s daughter has as well. Lugosi shows up and reveals he is, indeed, Arthur Perry, secret FBI agent. The lookalike is the one who was murdered. Perry reveals the now-dead lookalike was his evil twin brother whom he hadn’t seen in decades, and who was trying to scam the corporate swine. Being his twin brother, I suppose, explains the lookalike’s precipitous choice in suits earlier on. 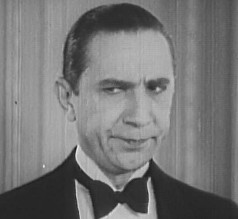 Lugosi stands in the drawing room and blandly begins to explain to the guests and audience the solution to the murder.

The only entertaining part of this snoozefest is catching Lugosi’s occasional inappropriate facial expressions. According to Perry, Dr. Scofield (inventor of the brain apparatus) had made a phone call to some voice-activated device which sent “waves” to Houghland’s studio. These waves mixed with the television signal and created “interstellar waves… or, the death ray!”

The death ray. Not a death ray, nor “a deadly ray of some sort,” but THE death ray. Of course.

Scofield’s motive was to get the patents for this amazing new invention and sell it to some corporate pigs for big bucks. Perry exposes him, Scofield goes with the cops, and all is well in Whiteyland.

This is a poorly-made movie that I still cannot believe was made the same year as such classics as “Mutiny on the Bounty”, “Dangerous”, and “Golddiggers of 1935”. As the old joke says, if you only have an hour to live, see this movie: it’s less than 60 minutes but it feels like a lifetime.