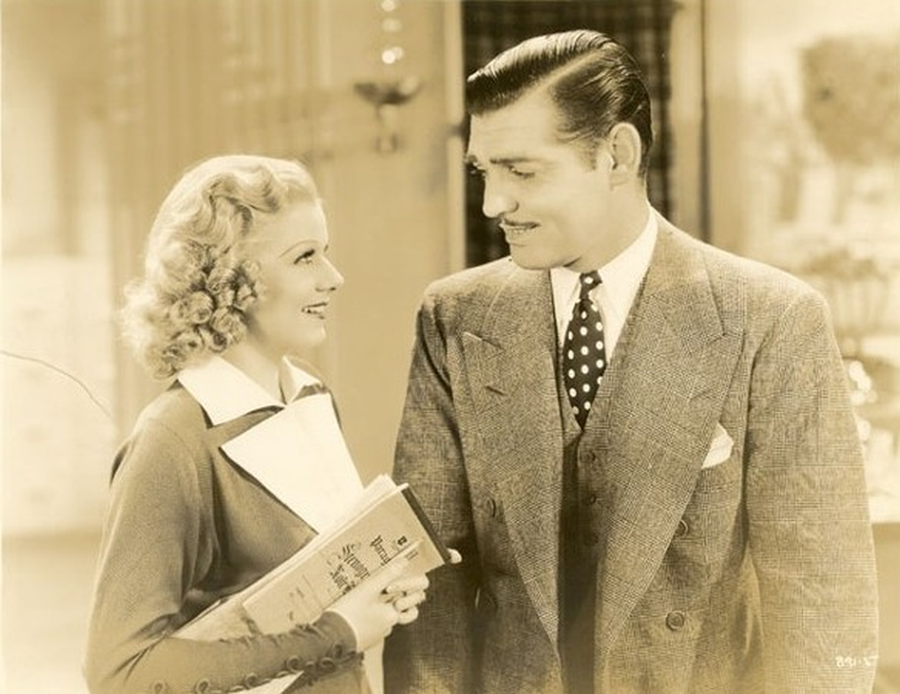 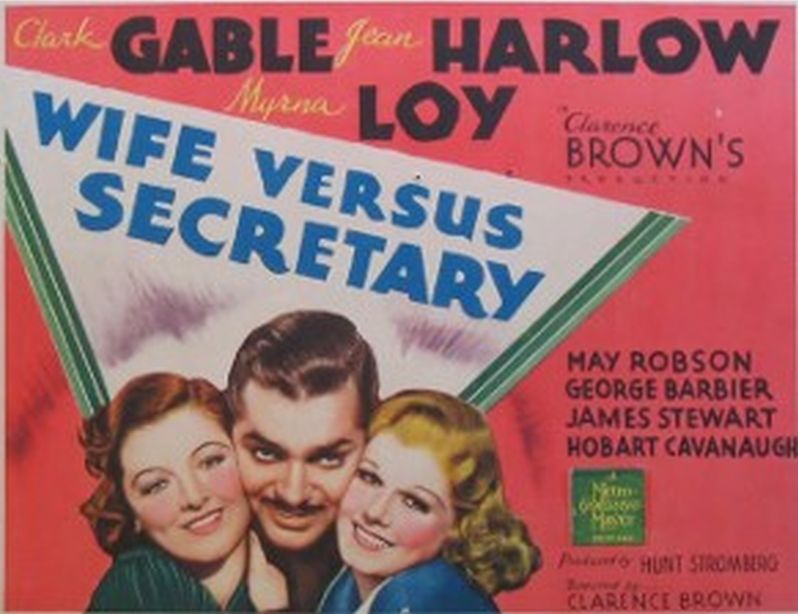 With a title like Wife Vs Secretary, one might expect a standard 1930s “woman’s weepy” starring Kay Francis, George Brent, and lots of inappropriate haute couture for everyday wear. Instead, this 1936 film is a charming blend of romantic comedy and drama, fast-paced and with lots of lively dialogue.

This fun, entendre-laden dialogue peppers the entire film. The trout in question reveals beautiful diamond jewelry, planted there by V.S. for his lovely wife. Later V.S., owner of a fashion magazine, returns to his office. There we meet Helen “Whitey” Wilson (Jean Harlow), Stanhope’s indispensable secretary. When Linda arrives to visit Van’s office with Van’s mother in tow, trouble starts. 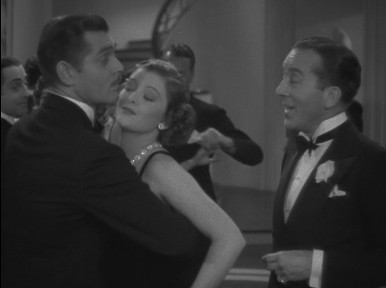 V.S.’s mother is suspicious of a beautiful platinum blonde secretary that Van has given a pet name to.

Later, when Linda and V.S. — and yes, there is a “versus” pun in his name — are celebrating their anniversary with a formal and lavishly drunken party, V.S. calls Whitey and has her come to the party so they can work on an important deal that’s just come up. Whitey arrives dressed in a stunning formal gown, as she had been at the theater with her boyfriend but dropped everything to be with V.S. when he called on the spur of the moment. She and Van go into a private room for some time, and return, only to dance cheek-to-cheek while everyone at the party gapes.

At this point it’s obvious the film is going to rely on continuous comic misunderstandings. Once you realize it, you instinctively begin to predict what’s going to happen, resulting in very few surprises after about the 30-minute mark. It’s no surprise when Van can’t talk about his secret deal and so works with Whitey in private, when Whitey obviously likes Van but doesn’t consider him available, and when gossipy friends and in-laws make Linda worry. 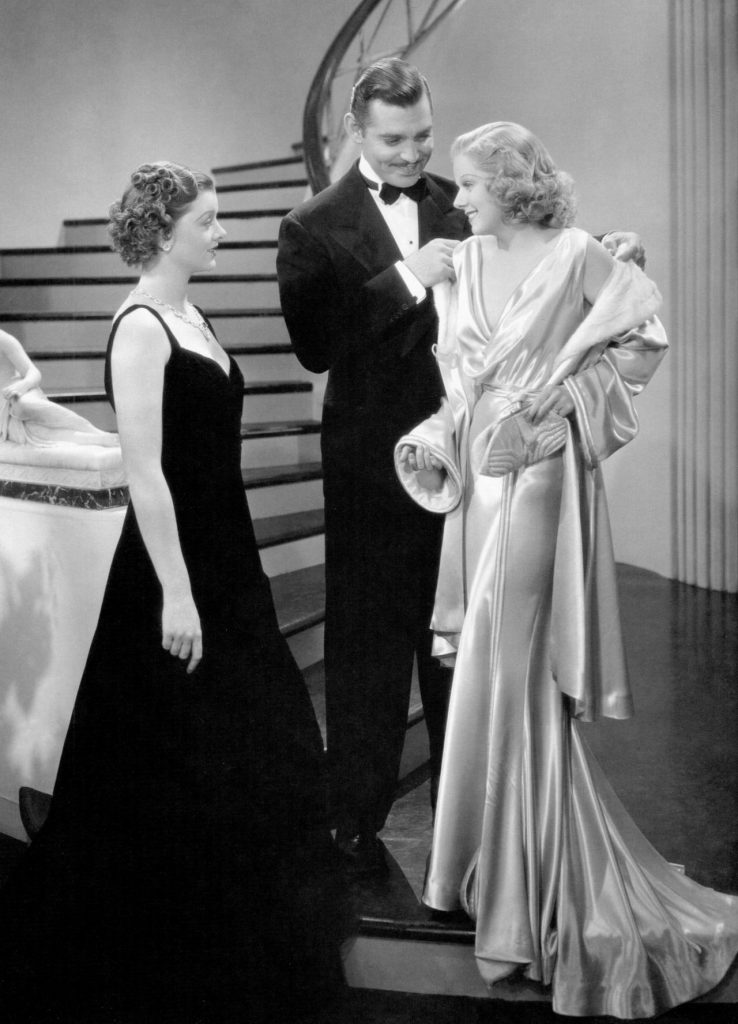 To be fair, the attention V.S. gives to Whitey is rather inappropriate, and his insistence that everything is innocent falls flat. It’s an unconvincing contrivance, made almost ridiculous when he takes a business trip to a tropical island and invites Whitey down with him, where they stay locked in his room for an entire weekend. The audience knows they’re only working on a contract, but we also know any wife in the world would have a fit about this set-up. When Linda calls her husband after not hearing from him for several days, no one is surprised that Whitey answers and all hell breaks loose.

The film is unsurprisingly dated in its treatment of professional women. Jimmy Stewart appears in an early role as Whitey’s boyfriend, a man who thinks women should be in the kitchen instead of the office. Whitey is good at her job and he thinks that’s unnatural. However, Whitey probably is almost too good at her job; she sacrifices much of her personal life, and eventually her fiancé, just to make Van happy. In another sign of the times, Van treats his secretary more like a girlfriend. When he orders Whitey to join him on the business trip, he snaps, “Hurry up, toots!” Ah, yes, I never remember that highly-skilled, professional secretaries should all be called “toots.” 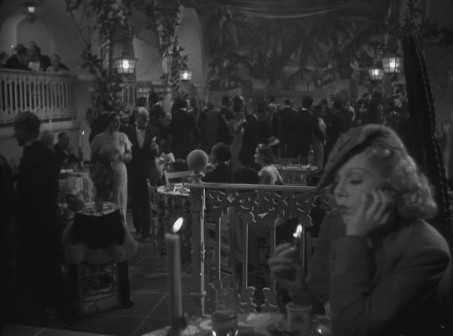 The film features some beautiful sets but rather uninspired photography. Gable plays, well, Gable, a fun-loving, suave, fashionable man all the women want. Myrna Loy is terrific, easily the best actor in the film. She’s witty, charming, soft-spoken and fun in a way that makes her very accessible, unlike the Thin Man series where she’s occasionally too soused or acerbic to be likable. 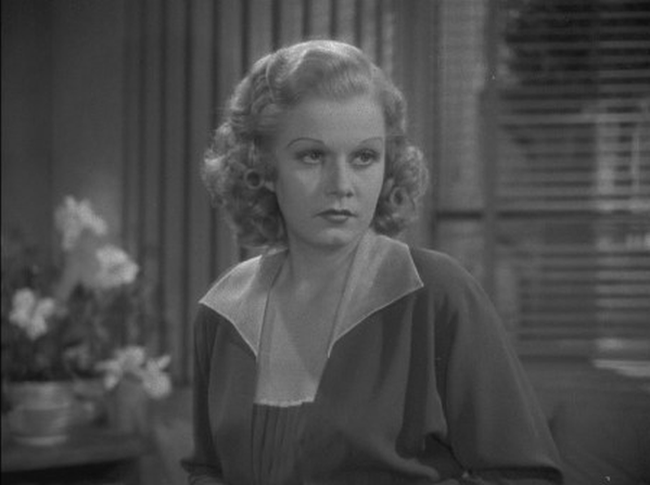 Harlow is convincing as an effective secretary who loves both her job and her boss. However, she is already sadly starting to show the physical effects of the illness we now know will take her life in a year. She occasionally looks bloated and overly-made-up to cover her pallor; Myrna Loy biographer Emily W. Leider noted that Harlow had to miss days for back pain during Riffraff, just prior to filming Wife vs. Secretary, and Jerry Roberts’s Hollywood Scandal Almanac notes all of her 1936 films were delayed due to Harlow’s repeated illnesses, which were surely exacerbated by the kidney failure no one diagnosed until she was on her deathbed.

The DVD set available from Warner Home Video includes two 1936 shorts, “The Public Pays” and “New Shoes,” a surreal musical short where the shoes do the singing. “The Public Pays” is included because an office set from Wife Vs Secretary is used in the short. The print is a decent transfer, though I’ve seen better. There are a lot of artifacts and scratches remaining in the film, which isn’t so noticeable while watching, but became very noticeable as I paused the film.

More photos from Wife Vs Secretary are available in a photo gallery here.