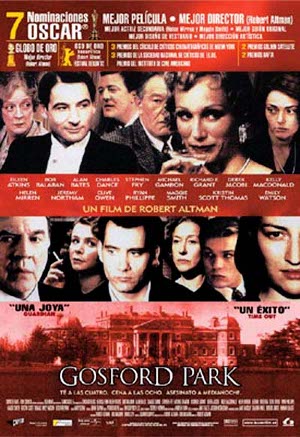 Ibetolis at Film for the Soul is more than just a gifted blogger with an ambitious project, he is also the model of patience. As part of the Counting Down the Zeroes series, I was fortunate enough to again participate with a post about “Gosford Park” (2001), which originally appeared at Film for the Soul. While you’re there, take time to read the rest of the wonderful reviews for the years 2000 and 2001.

“Gosford Park” isn’t an immediately impressive film. When released, publicity called it an English murder mystery turned upside down, made into something it never had been before. I knew the English manor house mystery genre well and was excited at the prospect of a new take on an old friend. After so much anticipation, I watched the film and found myself frustrated and sad when the entire experience was flat and dull.

In the intervening years I’d decided it was a film I needed to view again. I was so sure I’d missed the big Something that “Gosford Park” had wowed everyone else with. But now I know that, for good or ill, that big Something was only a phantom.

There is no reason to go into depth regarding the plot of “Gosford Park”. It’s simply not important. All you need to know is that it’s 1932, a group of rich people get together at an estate home for a weekend, they bring their servants, a murder happens, and we discover almost everyone has a secret. By the end of the film we understand the substance and the nature of many of the people who holidayed at Gosford Park that weekend.

“Gosford Park” is a solid film, immensely entertaining and gorgeous to look at. The location sets are stunning and the costuming is nearly perfect. The cast, of course, is one for the ages. Alan Bates was sheer perfection in a role that subtly held the entire film together. Emily Watson was also amazing, hitting the notes of this period piece perfectly. While the film was obviously intended to be an ensemble piece, Bates and Watson were the cornerstones and the film could not have succeeded without them.

Yet there were several false notes in the film. Ryan Phillippe’s character was poorly realized, and frankly Phillippe didn’t have the presence or talent to elevate or layer the role. The character of Isobel struck entirely the wrong tone; the unkempt hair and sullen expression were simplistic cliches straight out of high school theatre, unfortunate in a performance that required complexity. Every character in this film was regarded at a distance, which is a defining point of Altman’s ensemble casts, but the characters of Mr Blonde and Mr Standish were so vague that it muddied the plot to an unnecessary degree. It didn’t help that Mr Standish, from a distance, looked just like Mr Nesbitt. Great for the plot, terrible for the viewer.

Maybe it’s these minor missteps that make me feel the film is flat, that there is some piece of the Altman puzzle that never lands in its proper place. It’s borne from the insistence of Altman, writer Julian Fellows, and contemporary reviewers that “Gosford Park” did something to the standard English manor house murder mystery that had never been done before. Yet everyone says “Gosford Park” is “Upstairs, Downstairs” meets Agatha Christie, and it is. How do you reconcile these two facts? How can the film be a retread of decades-old formats and at the same time be unique?

The manor house murder mystery is a genre that has been alive and well for decades; it’s a subgenre of the standard mystery, which emerged roughly 150 years ago. It’s obvious that Altman knew all about the murder mystery genre. He cast a crew of actors — most notably Michael Gambon, Helen Mirren, Derek Jacobi, Maggie Smith, Geraldine Somerville and Clive Owen — who starred or featured in famous television murder mysteries. References to mysteries abound: Stephen Fry’s Inspector Thompson is every befuddled, trenchcoated inspector rolled into one (and topped off with M. Hulot’s pipe). Henry Denton is as Maigret as one can be without sharing the same name. The movie Weissman is making is a Charlie Chan film, and there are so many Agatha Christie references that the movie might as well have been written by her.

However, there are many things Altman himself said were done to specifically create a unique take on a murder mystery. For example, he layered the story with dozens of characters who are seen only for a moment here and there, with simultaneous dialogue and vague relationships with each other. That’s his signature style, of course, and the film is hailed as being remarkable simply because it is a murder mystery in the inimitable Altman style. Altman also said that he wanted to show this story from the servant’s point of view because it had not been done before. He also famously admitted that he added eight “fucks” to the dialogue to make sure it got an R rating and kids wouldn’t come into the theatre to see it. Lastly, the real movie “Charlie Chan in London” was added as a plot point, and the real movie star Ivor Novello was added as a character.

All of these things circled in my head while I pondered at the why of “Gosford Park”. Why was it made? And why did I need

to know? No other movie has made me so curious as to how it sprang into existence. I couldn’t reconcile Altman’s obvious deep knowledge of the genre with the fact that the film was intended to be an exceptional, novel approach. I wanted to know why so many details about a real film and a real movie star were included, especially since some of the incidental bits mentioned about the film were patently untrue. A film buff would catch the references, but would also know some of those references were wrong. And how could Altman say that focusing on the servants had never been done before when he, at the same time, said he was influenced by “The Rules of the Game”?

I believe that Altman fell into the trap, the same trap every mystery movie director and writer has fallen into over the past 150 years, the one where they think they’ve created a story that no one has ever done before. Reinventing the mousetrap, setting the locked-door puzzle on its ear. I’ve seen it a million times before. When it comes to murder mysteries, the wheel is never reinvented, it’s always just as round as when we started.

But I also think he was aware enough to know that a murder mystery buff is going to solve the crime immediately, that a film buff is going to catch his references, that a star-studded cast had been done before. Because of this, he tried to make the journey through the film the focus, not the solution to the crime. That’s what all murder mysteries do nowadays. We don’t watch Poirot because we want to find out who the murderer is, we want to see Hercule and Hastings banter with each other, we want to see the fabulous art deco buildings used for locations.

Ultimately, though, there were enough flaws to prevent “Gosford Park” from being the revelation it should have been. While Altman’s famous simultaneous dialogue was impeccable, it simply didn’t fit the story. The atmosphere of the film just didn’t mix with the clever little nods to mystery cliches. The constantly-moving camerawork kept one on edge, 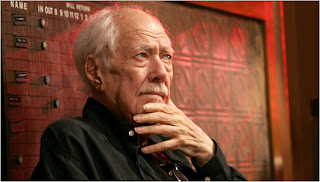 but there was no release at the finale, and the viewer is left wondering why this tension was created in the first place.

“Gosford Park” may not be the staggeringly singular genre-bender it was hailed as, but it is a love letter to murder mysteries. A sumptuous setting and wardrobe, a cast that one has never seen before or since, a fun story line, and the joy everyone felt while working on the film was palpable. And that’s more than enough.