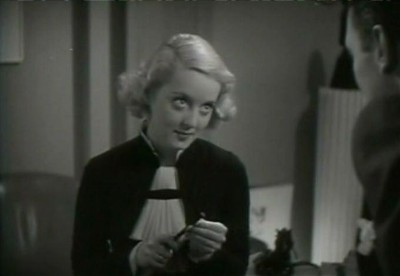 Bill Reynolds (George Brent) and wife Nan (Ann Dvorak) are happily married but struggling financially and quite frustrated with everyday irritations. Nan tries to get Bill to apply for better jobs because she’s disappointed that he is such a milquetoast, and of course this attitude strains their marriage further. Bill’s new, highly-paid supervisor Patricia (Bette Davis) had been friends with Bill and Nan in high school. Bill had been BMOC and Patricia admired him, then left town heartbroken when he married Nan. Several years later she’s made a name for herself and is back in the old hometown, while Bill is still in a go-nowhere job and refusing to take risks.

Ironically, Alfred E Green, who directed this film and many other 1930s Bette Davis films, always seemed the kind of director who never tried new things. He wasn’t the kind of guy to take a risk and improve himself, at least not that I can tell in his films. Green’s films are forgettable unless a performance or something specific in the material stands out from his reliable, unimaginative direction; “Central Airport” is a good example of the forgettable, while “Baby Face” is a good example of the performances raising the quality of the film despite the director.

Considering the contrast between Bill’s lack of ambition in this film and Patricia’s exciting, upwardly-mobile career, I wonder if Patricia’s arrival was supposed to trigger Bill’s desire to better himself. It’s not specifically played that way, though, so we’ll never know. Also, Bill’s wife Nan is the one with the conniving idea that helps him steal a large account away from his former boss. The account means more money, more clients, and Patricia now on Bill’s payroll. 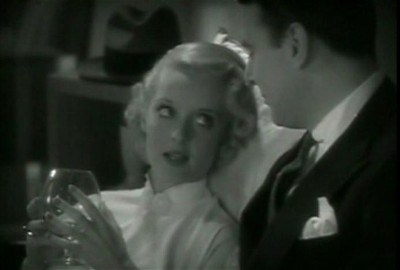 Patricia and Bill begin a blatant affair while scorning Nan as being nothing more than a provincial housewife, but Nan has no intention of letting Bill go. But go he does, running over their little boy with his car as he drives off. Oh, honestly, this little addition to the plot to make Bill even more evil than before was unnecessary. At least it was also hysterical.

More months pass! The little boy is healed, but hasn’t aged a day during this whole film, which is completely freaky. The divorce between Bill and Nan is about to be finalized, but during court testimony Nan shows herself to be such a kind woman and terrific housewife that Bill can’t leave her, so they reconcile everyone’s happy the end. Bleah!

There is some tacky, thoughtless dialogue in this film, especially when Nan and Dora compare being housewives to being slaves and decide the housewives were “sensibly” not freed. It’s played as a joke, but man, talk about disturbing. The blackface radio actors are offensive as well, but they are at least shown as offensive and tasteless.

Ultimately, “Housewife” is pretty boring. There is never any doubt as to where the plot will go. Dvorak’s performance is stiff and trite, and she often plays an entire scene by standing around with her hands on her hips like a fashion mannequin. In the first scene in their new luxurious home, she stands around like a fashion model with her back to the camera. It’s the strangest movie blocking I’ve ever seen in a professional film released by a well-known studio.

Brent could at times give shallow, one-note performances, but around Davis he really grew as an actor. Davis is gorgeous in her tight gowns and blonde hair, done a lot more tastefully than in “Fashions of 1934”. The role of Patricia is good only in theory, as we never see her working her high-powered job. Davis carries the role well, although does look uncomfortable in moments where she’s expected to react but not say anything. I’m sure part of that was ego, but I’m sure Davis knew by 1934 that the meat of these movies was in the strong female characters, and to be thwarted by some conservative women-belong-in-the-home plotline must have been frustrating.

At the time, Kay Francis was the queen of WB. It’s interesting to note that the film I watched immediately before this one was Francis’ “Stranded”, also from 1934 and also starring George Brent. In “Stranded”, Brent is a screaming hairy jerk, trying to force Francis to marry him to keep her from having a career. He learns his lesson and realizes Francis should be allowed to have both husband and career. Yet iIn “Housewife”, he learns his lesson and realizes women are best when in the kitchen instead of the office. Was this how WB doled out the good roles? Did they mandate that only the top actresses got to be strong women, while lesser and/or supporting actresses were made wives or homewreckers? I honestly don’t know, but I’m going to have to pay more attention to these early to mid 1930s WB films and see if there’s a pattern.