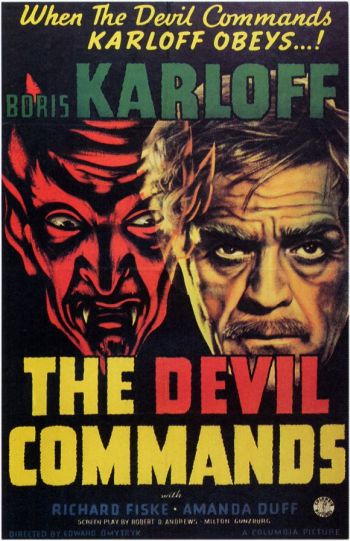 Frankensteinia has been holding a Boris Karloff Blogathon all week, which I discovered a couple of days ago thanks to Ivan at Thrilling Days of Yesteryear and W.B. Kelso at Scenes from the Morgue. Now keep in mind this post isn’t part of the blogathon, I just had this post ready to go and it coincided with the blogathon.

My husband and I love watching old Karloff flicks, the ones from the mid-30s to the mid-40s especially, because they’re often short, low-budget affairs that can occasionally surprise you. “The Devil Commands” has moments, but ultimately it sucks on ice. I love the concept of this film, just absolutely adore it beyond measure, which may have been why I was so disappointed when the film failed to deliver. Yet concepts aren’t always as they seem; another Karloff film, “The Black Door”, is the basic unimaginative good twin/evil twin plot executed with a complexity and intrigue that turns it into a really great film.

Edward Dmytryk directed “The Devil Commands” but it’s early in his career and he isn’t quite at the “Murder, My Sweet” level of ability. Karloff has a really great look — think psychotic stock broker — and Anne Revere gives a tight, impressive performance. But there’s really only about 25 minutes in the middle of this film that are worth watching, and the supporting cast of dull, lifeless performers almost ruin the good parts. Amanda Duff especially stands out as awful, which is unfortunate as she’s the narrator of the film. It’s no wonder she didn’t work in Hollywood after “Devil Commands”.

Total speculation, but I wouldn’t be surprised if “The Devil Commands” wasn’t officially finished and had to be pieced together through weird post-production finagling to render it suitable for release. I guess it seemed that way because of all the padding and all the juicy bits of plot we never see. Narration glosses over huge chunks of action that the audience would want to see, and the padding — usually with establishing shots of obvious miniature models of homes — is distinctly noticeable in a film that barely lasts 60 minutes.

Over half of the film is tedious exposition. The film finally gets going and suddenly entire chunks of plot that the audience would love to see is missing. Maybe “missing” isn’t the right word, as that presumes the footage was shot in the first place. Maybe there was never any intent to flesh out the plot. For example, once the sinister goings-on start we’re told in narration that the doctor has been experimenting for 2 years, yet never get to see any of what must have been awesome and gruesome work. Previously, Dr. Blair used live people in his experiment, but suddenly he’s using corpses. Why? How does he keep them fresh so they don’t stink up the place? What do these corpses do that live people don’t? I mean, we know the use of corpses is all just for the sake of sci-fi/horror, but this film is positively blatant about not giving enough of a damn to even explain huge details such as the corpses. 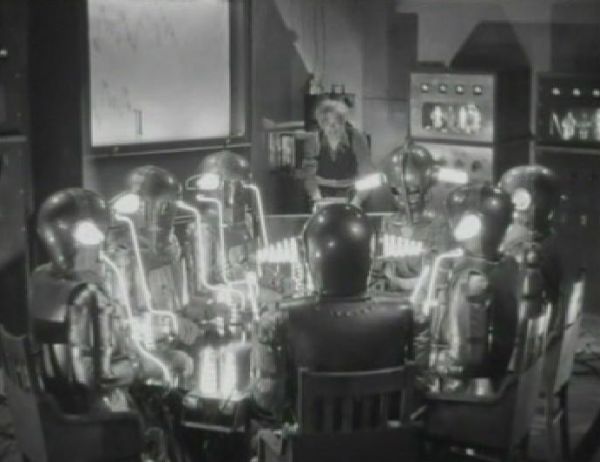 Oooh, it’s a corpse-powered battery that lets you talk to the dead! Terrific idea; unfortunately, there’s no plot to go with it.

Whether real or metaphorical, the devil of the title is never explained in any form. Is it one of the characters, is it science, is it grief? Nothing is explained well enough for the audience to decide. At the end of the film there is a main character who, I guess, suffers some kind of fate. We don’t know, because there was no footage included to actually show us what happened. While we see the fates of at least three other people, this character’s ultimate fate is at best hinted at. Just as the character (and I’m being vague on purpose) might be suffering peril, the scene cuts to other characters, then to a shot of the horrible model house and the film ends.

There are worse ways to spend an hour. There are also better ways, ways that involve Funyuns or lawn maintenance. If you must watch Karloff, go see “The Old Dark House” or “The Black Room” again and skip this one. 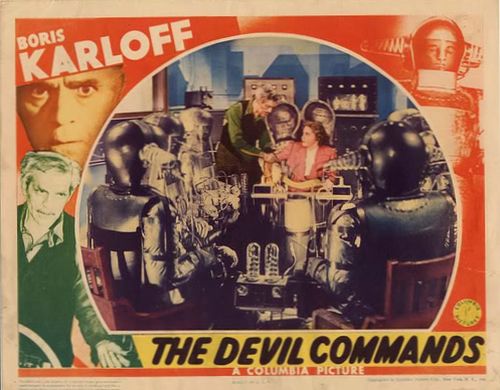