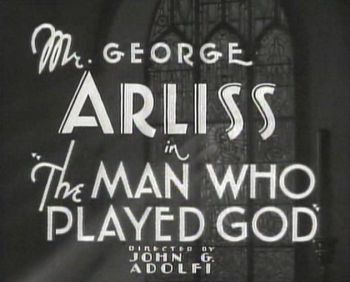 Let’s just get this out of the way: George Arliss is damned creepy. His face looks like a naked skull, and the over-dark lipstick, eyeliner, and what I think is makeup around his nostrils freak me the hell out.

In “The Man Who Played God” (1932), Arliss — who was the lead in the 1920s stage play, the 1922 film version, and the 1932 version here — plays the improbably named Montgomery Royale, internationally famous pianist. Women want him so badly that they accost him constantly as he tries to walk back to his hotel room.

Yeah. Look at this face and tell me if you think women of all ages would accost this man because of his sex appeal: 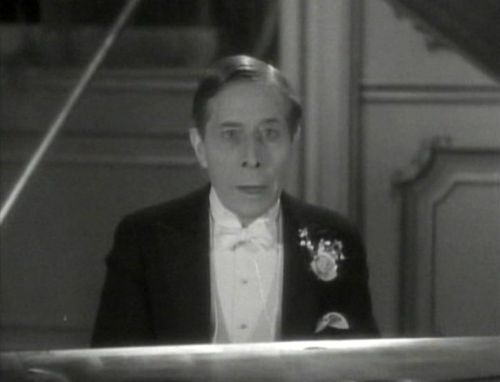 That’s straight up Phantom of the Fucking Opera right there, my friends. UGH. If he didn’t rely on such grotesque faces for emotion and if he wasn’t made up so ridiculously, he probably wouldn’t look as hideous. As he appears in most films, though, he just looks like a freakier John D. Rockefeller. 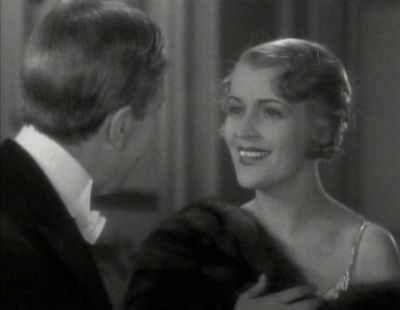 Okay, so 137 year old freakshow 64 year old Montgomery Royale is touring Europe with his sister-slash-secretary and his butler. He is currently in Paris. American friends Grace Blair (Bette Davis) and Mildred Miller (Violet Heming) are also in the city to watch him perform. Grace, over 40 years younger than Monty, is in love with him. Mildred, not yet in her 40s, is also in love with him, but she deliberately waits for him to approach her while he, essentially, gets Grace out of his system.

Stage actress Violet Heming is a strikingly lovely woman, very glamorous and graceful. I could stare at her all day. But she’s not the best actress in the world, and her frozen smile seems to be her only emotion.

During a performance for the King of France, a would-be assassin strikes. No one is hurt but Monty loses his hearing from the loud concussion. This means he suddenly can no longer play the piano, which was a little unbelievable, but whatever. 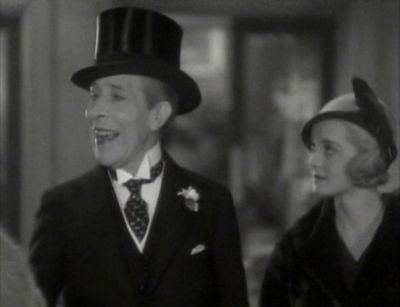 Monty’s hearing loss is the beginning of some of the most tedious 60-odd minutes I’ve ever sat through in a movie. First, we watch as everyone slowly writes notes to Monty to communicate with him. Then we watch as the doctor, who says Monty will be deaf the rest of his life, talks to him about lip reading. After a few months when Monty has learned the skill, we get to watch him blah blah blah on about lip reading to everyone who approaches him. It’s not the first time I’ve watched an early talkie adapted from a stage play where the dialogue feels like it’s right out of a text book, as though the whole purpose of the play was to be educational.

By the way, Arliss never looks at anyone’s lips while “lip reading.” He looks right at their eyes, never at the lips, and apparently no one involved in the film corrected him. His delivery is so awful it’s almost indescribable; he stops to pause every 2-3 words no matter how inappropriate. Earlier in the film when he could hear he would joke around quite a bit, but his jokes were so unfunny I honestly was never sure they were jokes. The only reason I think they were is that Arliss often looked straight at the camera as though he was playing a Vaudeville crowd. Was Arliss supposed to be a comedian?

Basically, I’m going to blame everything wrong in this film on Arliss. From everything I’ve read about this film it appears that he had a ton of creative control, and this does indeed feel like a vanity ego wank of a film. Arliss thought he was a lot more handsome, funny, and talented than he really was, at least in this film.

Grace takes care of a now-bitter and angry Monty for a while, but then goes on her annual vacation to Santa Barbara. In her circle of friends is Harold (Donald Cook), an old boyfriend still in love with Grace, who encourages her to move on from Monty because he’s too old and too bitter for her. She feels obligated to stay with Monty, though, until she realizes she still loves Harold.

Meanwhile, Monty half-heartedly tries to jump out of a window but is stopped, then picks up the habit of looking at people in a nearby park with his binoculars. He reads their lips and, in the case of a young couple that hopes God helps them with their health and money problems, he snidely helps them himself to prove there is no God. Ironically (snort!) he ends up doing a lot of charity for people and regains his faith. 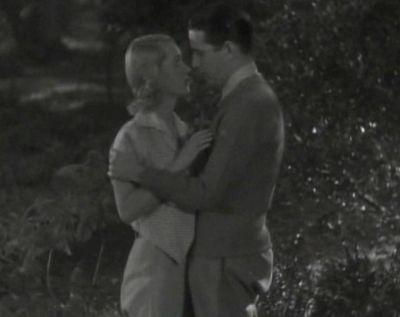 In the park after returning from Santa Barbara, Grace tells Harold she has to go back to George out of what basically amounts to obligation and pity, but George reads her lips from a distance and realizes what’s going on. He lets her go back to Harold who she really loves, and it’s implied Mildred is his new love.

There, I just saved you 80 long boring minutes.

There’s not much to say about this film. It’s Bette’s first film with Warner Bros after she left Paramount, and while she’s clearly a much better actress than she was a year earlier in “The Bad Sister”, she’s so underused and miscast that it’s pathetic. Maybe “miscast” isn’t the right word, but she most certainly doesn’t seem like the kind of girl who would fall in love with a freakishly hideous man 42 years her senior who turns homicidally bitter the moment something bad happens. 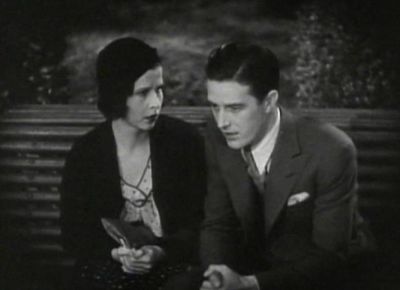 There were no decent sets to gawk over, and while Bette’s outfits were worthwhile, they put her in hats throughout most of the movie. That’s not a fashion move I agree with. Ray Milland is in an early uncredited role as Eddie, one of the people helped by Monty once he starts spying on them and invading their privacy for their own good. Harry Stubbs from “The Locked Door” and “Alibi” has a very small role, as does Hedda Hopper.

Aaaaand that’s about it for any possible interest one might have in this film.

But, I did notice something while watching this movie. Movie Geek Alert! Watch! As I prove something no one cares about! Thrill! As I astound you with my nerdiness! 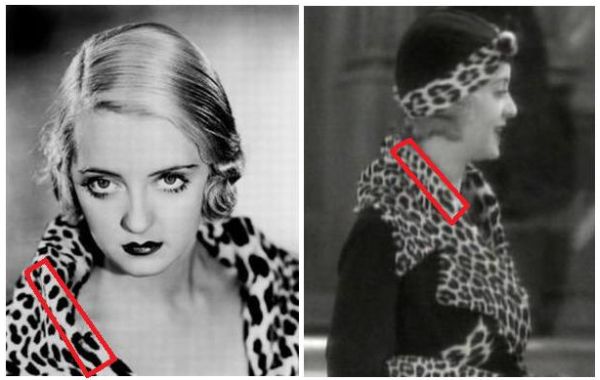 The photo on the left is all over the ‘net and always attributed to “The Rich Are Always With Us”, but I am almost positive that’s not the right movie. That leopard print number is the coat Bette wears in “The Man Who Played God.” You can tell it’s the same coat because the leopard pattern is exactly the same. It’s very distinctive and I have nerdily marked it in red to illustrate my point. So there you go, this promo photo is from “The Man Who Played God.” Use this trivial knowledge for good, not for evil.

And now to end this post, here is a gallery of a few photos I found online: 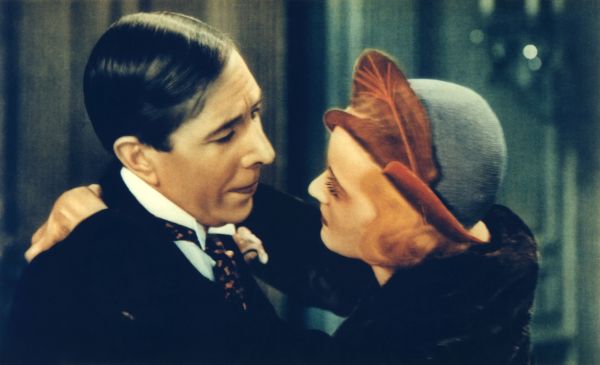 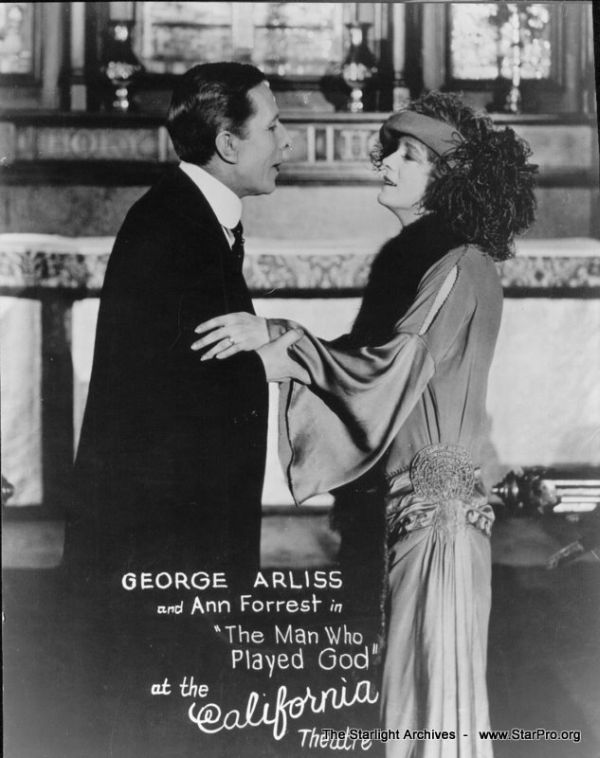 From the Starlight Archives, a promo for the 1922 silent version of the film. 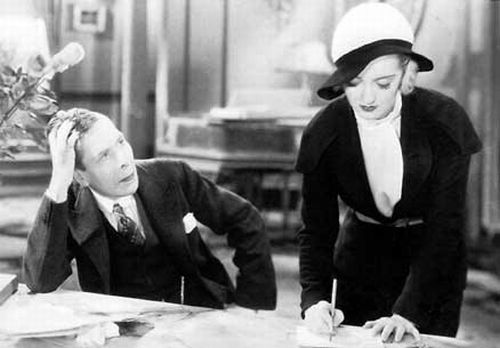 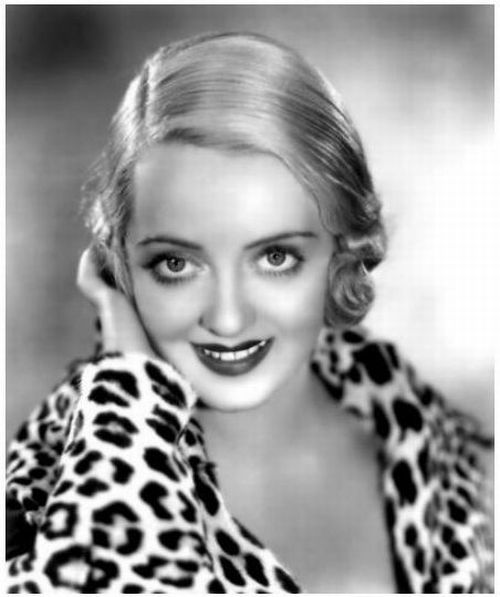