Before I forget, I want to mention I am now posting to my Twitter when I update the blog. I’m not very wise in the ways of Twitter, so the hashtag #sbbn I automatically add to the tweets may or may not be appropriate. You’ll tell me if I’m doing it wrong, right? Right? I’ll pretend you all said yes. 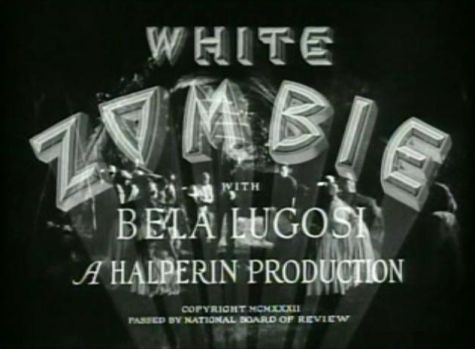 It’s been zombielicious around Casa de la Stacia lately, partly because Halloween wasn’t that long ago, and partly because, hey, zombies. The first zombie film in the batch I recently watched was the cult classic “White Zombie” (1932). This was something I recorded on Halloween of 2008, which tells you a bit about the backlog of films I’ve got.

“White Zombie” is a pre-code talkie as well as a horror film in the early Universal vein. Although it was filmed for RKO Pathe, its sets were on the Universal lot, and many props and set pieces from Universal horror films made their way into “White Zombie.” The movie resembles other very early 30s films which use sound sparingly and utilize silent-era expressionist techniques of framing and shadow. Most of the shots in “White Zombie” have a very subtle dark circle around the frame as well; if you turn off 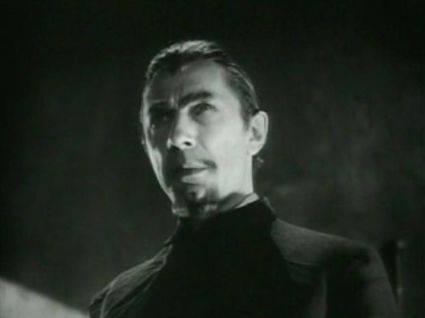 the sound and put the film in a slight fast forward, it looks like a beautiful flickering European silent.

Bela is arguably at his sexiest in “White Zombie”, although one has to look past the unfortunate eyebrows glued to his head to see the hotness. Lugosi and Joseph Cawthorn, who plays a missionary, are clearly the stars of this show. The rest of the cast kind of mills about in a bunch of unconnected performances. Robert Frazer thinks he’s in a silent film, which kind of works, except he thinks he’s in “Birth of a Nation” instead of “Nosferatu.” John Harron is a bargain basement Colin Clive, and Madge Bellamy, gloriously ethereal, has only to look beautiful to play her role.

Here, Madge has donned her 15-foot-long train before putting on her dress. This makes complete sense and wasn’t orchestrated just to show a woman in her unders at all: 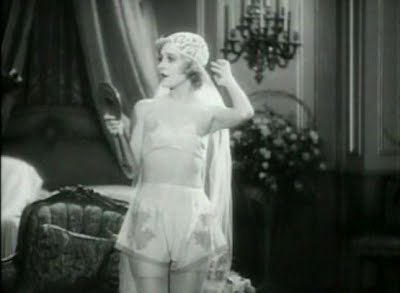 “White Zombie” combines themes of horror, slavery, jealousy and possession into something really quite magical. It should be a bad movie, but it isn’t. Like a dozen other films that are known primarily as cult films, it is unfairly disregarded and maligned by many. Reviews at the time were overwhelmingly negative, so much so that this poor critical reception helps to perpetuate the movie’s cult status. 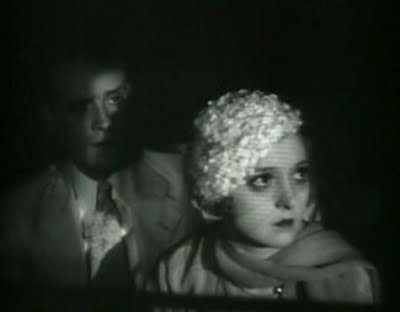 Victor Halperin, director, made very few films in his career, although I occasionally read comments about Halperin stating he directed dozens of silents in the 1920s. The few silents he’s listed as directing on the IMDb are all lost. Coincidentally, one of his 17 films is the early exploitation film “Party Girl” (1930), a film that is sitting on my table as I type, waiting to be watched for the Marie Prevost project. “Party Girl” is the earliest Victor Halperin film that still survives.

For more about “White Zombie”, please read AND YOU CALL YOURSELF A SCIENTIST’s insightful and revelatory recap and screencaps here (spoilers abound!) and check out Goatdog’s excellent short entry here. 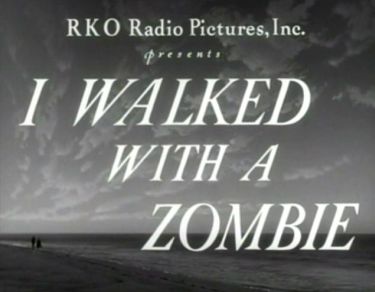 “I Walked With a Zombie” is a Jacques Tourneur-Val Lewton film, a modern horror take on the classic Jane Eyre. A lovely young nurse from Canada is sent to island St. Sebastian to care for the catatonic wife of a plantation owner. The locals say the wife is the walking dead, a zombie, but is she really?

What I loved about this film is how usual film cliches were flipped a few degrees off, making what should have been a retread surprisingly unique. Briefly shirking the seriousness of the subject matter that horror films of the time relied on, the opening credits reveal a fun little joke: Any similarity to actual persons, living, dead, or possessed, is purely coincidental.

Borrowing from Jane Eyre, the beautiful young nurse Betsy falls for the older, married, somewhat sinister Paul Holland (Tom Conway) instead of the handsome younger half-brother Wesley Rand, played by first-billed James Ellison. Wesley and Jessica, Paul’s sick wife, at first seem to be victims, but later we aren’t so sure. Paul and Wesley’s mother is a competent, capable doctor, one who respects the local superstitions and voodoo; in contrast,

the missionary in “White Zombie” quite frankly calls voodoo sick and disturbed.

Which leads me to another astonishing point: There is a remarkable lack of ridicule poked at “the natives” or their “ignorant” ways, and even less derision lobbed at the people of color in the film. For a movie of this era it is surprisingly progressive, making sure everyone knows that the island’s name, St Sebastian, comes from the figurehead on the slave ship that brought Africans to the island to lives of despair. When Betsy first arrives on the island she cheerfully tells her carriage driver — a man descended from slaves brought to St Sebastian — that at least his ancestors were brought to a beautiful place. “If you say, Miss,” he replies quietly, “If you say.”

This is four short years after the first African-American woman won an Oscar for playing the good mammy, mind. I’d have expected this kind social commentary in a film of the 1950s or later, never 1943. 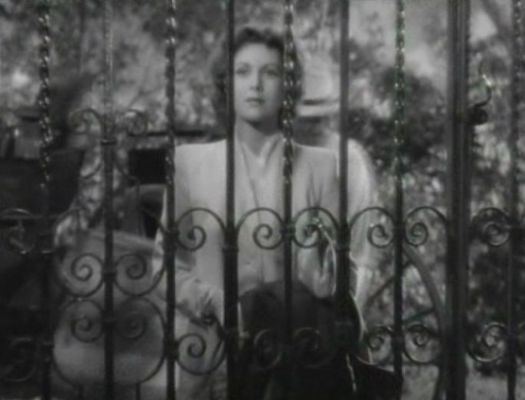 The atmosphere is remarkable, never once looking like just a set, even though in a couple of scenes you can clearly see the actors’ shadows being cast on the backdrops which are supposed to be wide open outdoors. The images are soft, and while that may be due to the condition of the print, I’d like to think it was deliberately done to accentuate the heady, thick-aired atmosphere. 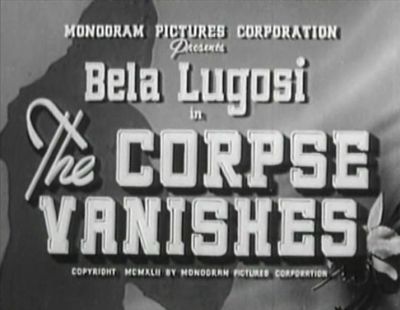 “The Corpse Vanishes” (1942) is a truly terrible Lugosi film that made its way onto a first season episode of MST3K. Despite having seen probably 150 episodes of the show, I didn’t watch this episode until it was released on the most recent box set. It’s a good episode despite being first season, which means no TV’s Frank. Damn, I would wreck that man given half a chance. Uhm. Not that I ever watch MST3K episodes just to stare at TV’s Frank. What? Don’t look at me like that.

The reason I’m yammering on about the hotness of Frank Conniff instead of the film is that the memory of TV’s Frank is 1000 times more entertaining than the reality of “The Corpse Vanishes”. How did Bela end up in such crap films? He was a good actor with a moderate range and amazing film presence. Was it the accent? Was he typecast? Turning down “Frankenstein”? Personal demons? I wish I knew. I just can’t help but think that Bela never deserved this.

“The Corpse Vanishes” is about this crazy mixed-up wave of brides dropping dead at the altar, and within moments of their deaths their corpses are stolen. Bela as mad Dr Lorenz is behind the corpse theft; he’s using the women’s glands to keep his own freaky wife young and beautiful. It’s only half hinted at, but he uses new brides because they are virgins. Allegedly virgins. 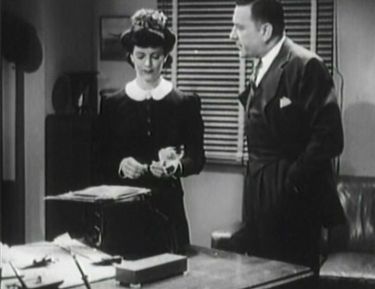 Bela and co-star Elizabeth Russell, the beautiful and creepy actress in many of Val Lewton’s best films, sleepwalk through the movie, but you really can’t blame them. I love B movies and Z-grade horror flicks, I love Bela, I love Russell, and this is the kind of movie I should have enjoyed even if it was awful. Instead, I was just embarrassed for half the people involved and actively pissed off at the other half.

Luana Walters, playing plucky girl reporter Patricia Hunter, is beyond awful. When she’s running from the creepy wife of Dr Lorenz, she just halfheartedly trots away and then turns to look behind her without even a tiny bit of emotion. Was she scared? Concerned? Did she leave a souffle in the oven? No one will ever know.

Playing her boss is Mr Marie Prevost himself, Kenneth Harlan, and you can see his talentless ass looking off camera at cue cards. He is consistently 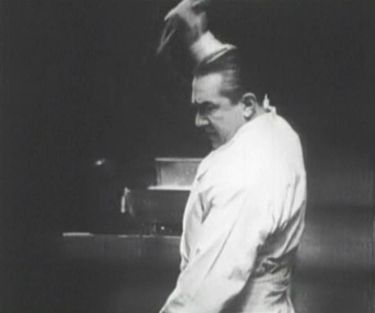 out-acted by a water cooler in his office.

There is one scene where the big lab assistant of mad Dr Lorenz gets amorous with an unconscious brides and has to be whipped away by Lorenz. Sound familiar? You know it does, baby! Ed Wood only stole from the best.

Another assistant to Dr Lorenz is Angelo Rossitto, the little person who was in every movie made from 1926 through 1987 inclusive. In the last few days I’ve seen him on TCM in “Pocketful of Miracles”, “The Greatest Show on Earth”, and “The Spider Woman.” He’s in another 4 movies I have laying around waiting to be watched, and probably a dozen I have waiting to be re-watched. Angelo is awesome, is what I’m saying.

While I think “The Corpse Vanishes” stinks, not everyone agrees. Visit 1000 Misspent Hours’ entry on the film for a more in-depth and favorable review.