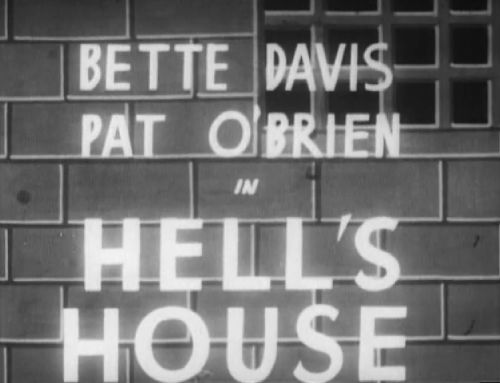 “Hell’s House” (1932) is an odd film. It’s part drama, part social commentary /exploitation, part juvenile delinquency film, and all badly-made quickie. For evidence of the quality of this film, just check out the title screen. Who did that, the director’s 8-year-old nephew? More than anything, this is a boring movie, as it tried to be salacious without going so far as to offend anyone.

And this really confuses me, but the opening screen just after the credits tells us that this story “goes back to the days of PROHIBITION.” Since the movie was filmed in late 1931 and released January 1932 — the Cullen-Harrison act didn’t get signed until over 2 years later (Prohibition completely ended at the end of 1933) — audiences wouldn’t have had to go “back to the days” of Prohibition at all. Even if that was a screen tacked on for re-release several years after it was first shown, I can’t imagine any studio would assume audiences were so dim as to not know the movie was made during Prohibition, because it’s obvious from the first few minutes.

For this film, Bette was on loan from Universal who, by this time, had no idea what to do with her and were probably happy to ship her off somewhere. She got top billing above Pat O’Brien, and the 3rd star is juvenile actor Junior Durkin, hot off of 2 popular performances as Huckleberry Finn. Durkin made very few films, and besides his roles as Huck Finn, today he is best known as being one of several young men to live with producer/agent Henry “Adonis factory” Willson over the years. Durkin died just 3 years after this film was made, in a car accident that claimed three other lives including an agent and Jackie Coogan’s father. Jackie Coogan was involved in the accident, too, and was the only one to survive. 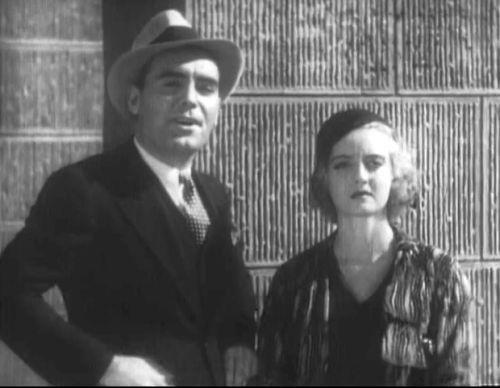 By the way, this is a public domain movie. I don’t know if the condition of the screencaps gave that away or not.

Jimmy (Junior Durkin) finds himself orphaned and sent to live with his aunt and uncle in the big city. One of his aunt’s boarders is a man named Kelly (Pat O’Brien), a boastful man who claims to know the mayor, editor of the NY Times, Rudy Vallee, and anyone else that would impress his listeners. When his aunt and uncle need money, Jimmy asks Kelly for job without realizing Kelly is not the well-connected businessman he appears to be but rather a bootlegger. Jimmy takes a job at Kelly’s office; it gets raided and, even when he finds out what Kelly is, he refuses to snitch on him. He’s sentenced to 3 years in juvie, forced to work hard labor in a brickyard. Kelly is the only one who knows what has happened to Jimmy, but he tells everyone that he wanted to help Jimmy but couldn’t find him. The truth is that he didn’t help Jimmy at all because he’s too big of a coward to come forward.

At juvie, Jimmy makes friends with a sickly young guy named Shorty. Their relationship is what most people talk about when they mention this movie, as it is more than a little homoerotic. Shorty calls Jimmy “big boy” all the time, for one. Yet the strange affectionate nature between Shorty and Jimmy is also shown early on between Jimmy and his mother, and I am certain this is simply a case of something old-fashioned not translating well to modern day audiences. It’s certainly not deliberately titillating like lingerie-clad daughters flirting with their dads. I’m lookin’ at you, “Tarzan.”

Ubiquitous character actor Morgan Wallace shows up as Gebhardt, a journalist (or something) looking to write a report about the conditions in juvie, but officials clean everything up so he doesn’t know the truth about the deplorable conditions. While Shorty lays dying in solitary, Jimmy escapes and runs to Kelly for help for his friend. By this time Kelly’s girlfriend Peggy (Bette) has figured out Kelly was lying about Jimmy running off. When Jimmy returns, she insists Kelly help him since he was the one who got Jimmy into trouble in the first place. It takes a lot of pushing for him to do the right thing. 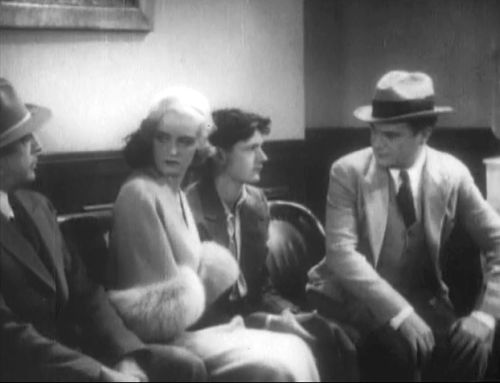 Peggy gets in touch with Gebhardt who in turn gets in touch with an official of some sort. They listen to Jimmy’s story and vow to change things, but it’s too late for Shorty, who has become slightly dead. Dead, I tell you! For the life of me, I can’t remember if Kelly gets any comeuppance or not, but I think he might. You’ll understand if I don’t go back and re-watch to find out.

There is very little to say about this film. Bette does almost nothing, but when she does show up on screen she’s the sole voice of reason, the best actor, and she and Durkin are the only two you even try to elevate the material. I dislike Pat O’Brien intensely, and I hate movies that have unbelievable plot points, so “Hell’s House” was an ordeal.

I’m rather surprised that the production company splurged on promotional shots for this movie, but apparently they did. This is Bette in one of her “Hell’s House” outfits: 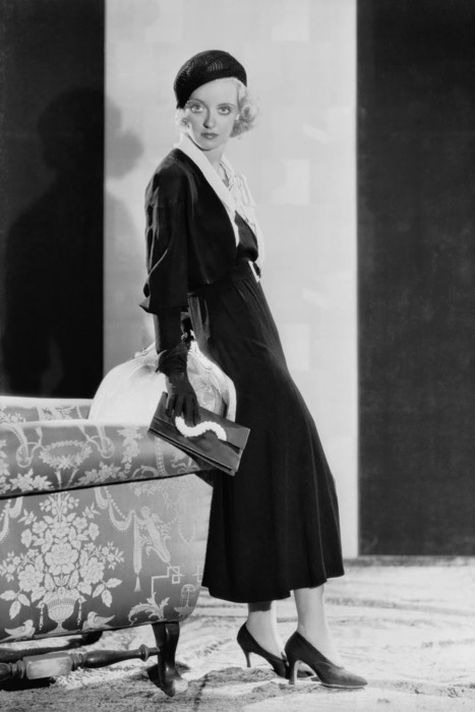