It happened again: Ivan has passed along to me the Kreativ Blogger Award, probably because he ran out of spare Oscars to hand out instead. I kid, I kid; SBBN is only eligible for Emmys. Anyway, I would like to thank Ivan again for the kind thoughts and the award, and though I am running low on time and can’t pass this on to other blogs per the Kreativ Award rules, I type like the dickens so I can at least list the seven “interesting” facts about me:

1. I learned how to make pasta from Rudolph Valentino. ‘Struth. Several years ago I watched a bio of Rudy where someone related an anecdote about how he would cook enormously long strands of spaghetti by slowly adding one end of the pasta and swirling it in the boiling water until the whole batch was submerged. It works! No longer do I break spaghetti in half like my mother taught me. Someone online has also happily posted Rudy’s “Secret” Spaghetti Sauce recipe, which I’m going to have to try some time.

2. I work in m*dical tr*nscription. Asterisks to thwart web searches. Anyway, last week this slight-doofy doctor I work for left his tape recorder running while he 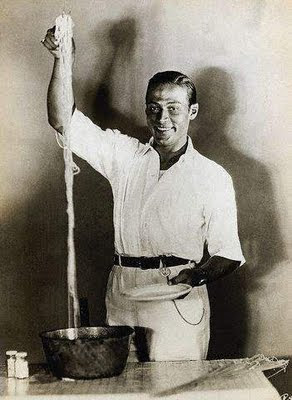 went to the bathroom. Yes, folks, I get paid less than minimum wage to hear a doctor urinate via tape.

3. I plan on watching “Astro Zombies” this weekend. You’ll hear about it, I’m sure.

4. I’m going crazy trying to remember what the holes on the edges of film are called. Sprocket holes? That doesn’t seem right.

5. I just finished my first guest blogger article for another site. I’ll be posting about it when it goes live.

6. I have a superant on my desk. This Christmas, I got my husband an ant farm and a bunch o’ ants. All the ants died months ago except for this one lone superant who has survived over 5 months when the usual lifespan is about 2. All the other dead ants are just laying about all over the farm while Superant goes about her day. It’s kind of depressing, actually.

7. I have run out of things to say. Truly, I just so rarely talk about myself on this blog that it feels weird even mention these things. Thank goodness I am at #7 and don’t have to list anything else.

Thank you again, Ivan! And now, on to the entertainment portion of tonight’s show: 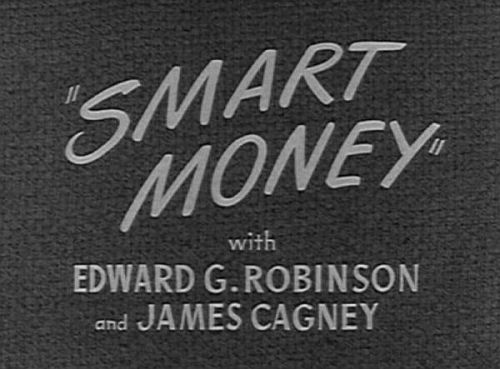 As I was searching for something online about this movie, I discovered almost nothing about it save that it is rather strangely included in the Warner Gangsters Collection, Volume 3

box set. While the stars Eddie G. and Jimmy Cagney are known for their gangster films, “Smart Money” is not a gangster film except in, perhaps, a rather loose definition of “gangster” that equates with “underground casino owner.” While Eddie G. gets involved in a gambling racket, he is most definitely on his own in that business and not part of a gang or in with the mob. Succeeding on his own is part of his “I’ll show you all” attitude, which is a huge component of his character.

The initial reason I recorded this film was because it had an early small appearance by Boris Karloff, but the premise sounded pretty good for a pre-code, so I was a little surprised at how off-putting the opening act of the film was.

Nick (Edward G. Robinson) is a barber in the small burg of Irontown. He owns his shop along with younger brother Jack (James Cagney). Nick is also a very lucky guy, especially when it comes to gambling, and he frequently hosts a back room game of craps behind the barber shop.

When the movie opens, Nick is strutting around like the king of the world, all puffed up about how great he is, how much cash he has, how many women he bags a week. He also manages to spout off racist, anti-Semitic, and sexist crap within the first few minutes. I wasn’t sure if this was to indicate that he was a small town rube or not, but when he started bragging about his new checkered suit, I decided it was deliberate. 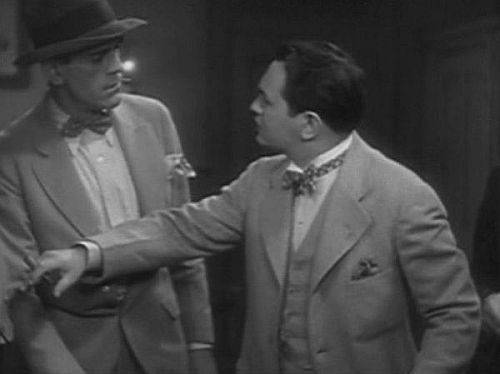 But then he went out to meet up with one of his dates, a woman who looks rather panicked. She says she needs $100 and, when he asks why, she whispers to him. At first he looks stunned, then he looks pleased with himself. I think we can assume she told him she was pregnant. He proudly gives her a $100 bill. (The IMDb lists this character as a “blonde borrowing $100”, but she does not strictly borrow it, she asks for it outright because she is in trouble.)

She walks away and hands the bill off to a man in the shadows: Sport Williams (Boris Karloff), who takes the $100 back to Nick’s backroom gambling affair. Nick figures out what’s going on, of course, wins it back, wins more besides, and all his friends encourage him to go to the big city to gamble because he’s so good at it. They decide to take up a collection for him so he has serious gambling money, and Nick promises them profits in return for their initial investment.

Off to the big city he goes. He starts clumsily asking around about notorious gambler Hickory Short and his secret games, and a pretty clerk at the hotel tells him where the game that night will be. However, he has unwittingly stumbled into a scam. A group of men pretend to be the famous gambler Hickory Short and his pals, and they host fake poker games to scam small town rubes out of their dough. Nick loses it all. He figures out what has happened quickly enough, sets up another session with the fake Hickory Short gang and wins the money back. By this time his brother Jack and some other friends from Irontown have arrived with the necessary force to cover Nick’s back.

Nick starts his own gambling venture, eventually becoming a big name in the big city. His casino is fashionable, Jack is his right-hand man, and the DA is out to throw the whole lot of them in the slammer. The DA is played by Morgan Wallace, who recently appeared on SBBN as a journalist (or something) in “Hell’s House” (1932). 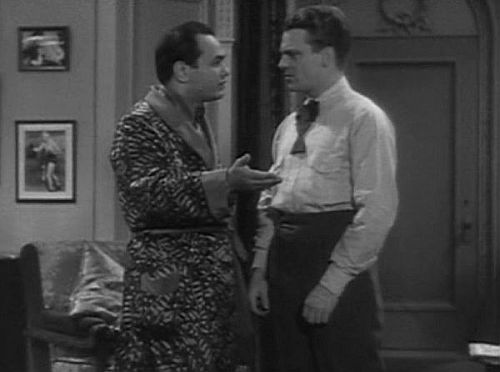 The way this plot played out was really odd. Three times during the movie, a woman arrived out of nowhere to get the plot moving along. The use of these supporting female characters merely highlighted the go-nowhere plot. Lest you think this was sexism, I should note that there weren’t any significant supporting characters of any gender. Even Cagney is underused despite ostensibly being the 2nd lead.

What just got under my skin was the character of Nick. We see so much of him because the other characters are shoved so far into the background, so he needs to be strong and compelling, but he is not. Throughout the film, Nick continues to act like a rude boor, bigoted and small-minded, but I am positive he was intended to be a lovable rascal. He is set up as unsophisticated in the beginning, but those horrible affectations of his continue on well after he has allegedly become streetwise. If the movie was trying to portray him as not succeeding in the big city underworld because he was an overconfident hayseed underneath it all, the movie failed.

Also, during the end scene a main character gets accidentally killed in a pretty gruesome manner. I had to turn away as it was so surprising and graphic, although I suspect no one else would think it was as graphic as I did. The moment hit me just right, perhaps because I was already irritated by the film. I love Eddie G., but I could have lived a rich, full life without having watched “Smart Money.”