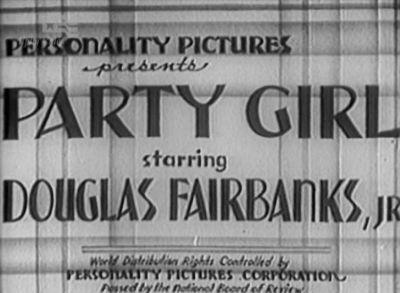 “Party Girl” is a 1930 social drama slash exploitation flick that was written, directed, and produced by Victor Halperin. It’s available on about a million public domain disks, even in the UK where it was banned until 2003. The film was notable as being the movie that spent the longest time between banned status and passed status in the UK, though that’s probably because in the years between 1930 and 2003, no one bothered to try to get it unbanned for release.

“Party Girl” is very similar to other 1930s social drama flicks, so if you’ve seen “Marihuana” or “Tell Your Children” you know what to expect. It’s low budget, low on plot, and filled with obviously untalented actors. But the difference here is that not all of the actors are untalented or obscure. Heading the cast is Douglas Fairbanks, Jr., who does a far superior job of acting here than he did in 1932’s “Union Depot.” Fairbanks was a star at the time he did “Party Girl”, having just been in “Our Modern Maidens” (1929) and starring in “Dawn Patrol” (1930) the same year.

The other big name star in the film is, of course, Marie. Get this: Marie isn’t credited, not even with a pseudonym!

I originally thought that she wasn’t credited because this was an exploitation film and her role is rather saucy, but she’s clearly listed in the 1930 Mordaunt Hall review of the film as a player. They don’t try to disguise her one bit, either. She is so obviously Marie Prevost that I have no idea why she isn’t credited. Are these credits added for a re-release that just forgot to mention Marie?

The film, like all good social drama slash exploitation flicks, pretends to be concerned with serious social issues. “Our earnest hope,” reads an opening scroll, “is that public-spirited citizens [will] forcibly eliminate the vicious party girl system” after seeing this film. Early on in the film, we also see the obligatory explanation scene where someone thinly excused as “investigating” the social evil discusses what it is and why it is so bad for society.

Party girls are prostitutes, by the way, on the off chance that wasn’t obvious. In “Party Girl,” they’re prostitutes working for Mme Lindsay, owner of a company that provides glamorous and beautiful women for business entertainment. Businessmen hire out girls to butter up potential clients, and the party girls are savvy enough to demand contracts benefiting their employers be signed before bodily fluids are exchanged.

The film quality of “Party Girl” is quite poor, as you’d expect any 80-year-old low budget public domain flick to be, but I think you can still see well enough to enjoy an art deco first, for me anyway: The art deco filing cabinet in Mme Lindsay’s office. 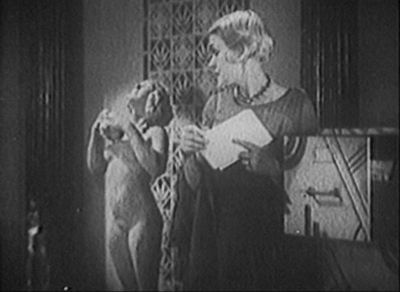 Where did you even buy an art deco filing cabinet? Montgomery Ward’s?

A short while later we learn that the blonde secretary here is an undercover cop working to infiltrate the party girl racket. You need to know this for the plot to make sense. Well, as much sense as can be made of this plot without going into diagrams, Powerpoint presentations, and pie charts.

Speaking of pie (HA!) a mere 3 minutes into 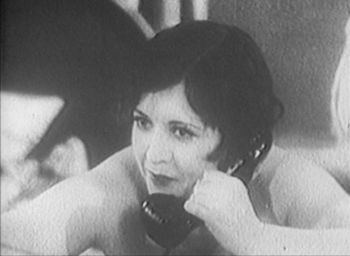 the film Mme Lindsay calls Diane, one of her best girls. Diane, played by Marie Prevost, is busy laying nude on a table and being repeatedly spanked by a very mannish female masseuse. The masseuse is Mack Sennett veteran Louise Carver, El’s mother-in-law in “The Big Trail” and professional large, frightening woman. Carver had also worked with Marie previously in 1924’s “The Hollywood Kid”.

Marie is an absolute hoot in this film. She can barely say her lines with a straight face, and considering that everything she says is over-the-top raunchy camp, you can’t blame her. While being spanked, she comments on her own “gorgeous pale body” and says that if the masseuse cracks her spine once more she’ll “be ready for anything.” Mmm. Flexibility.

After the phone call, the masseuse orders Diane to roll over, at which point she starts laying some open-hand smacks on the party girl’s frontal areas. I am so not joking with this.

We go to the business office of one John Roundtree, owner of a glass manufacturing concern. Roundtree is played by John St. Polis, very recognizable as the surgeon in Lon Chaney’s “The Unknown” (1927) and the Comte de Chagney in Chaney’s “Phantom of the Opera.” Roundtree’s son Jay (Douglas Fairbanks, Jr.) arrives home from college late and only wants to get some cash from his rich dad and flirt with Ellen, the secretary. Ellen (Jeanette Loff) and Jay are obviously in love. 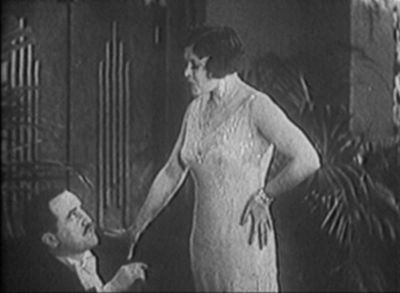 When Jay leaves, Mme Lindsay arrives under the poorly-plotted pretense of helping to educate Roundtree about the party girl system. Roundtree is the head of the Merchant’s Association, which is supposed to explain why he cares what goes on in business circles that don’t affect him. Roundtree’s assistant first says that the use of party girls is morally corrupt, but then says that all their competitors in the window glass business are using party girls to entertain clients and get contracts, and they have to follow suit to compete. Roundtree refuses. When Mme Lindsay leaves the office, she stops to talk to Ellen. We find out the secretary used to be a party girl herself, and Mme Lindsay wouldn’t mind having her back.

Ellen goes home to the apartment she shares with “gorgeous pale skin” Diane. They were childhood friends and, while Diane loves the party girl life, Ellen disagrees but won’t leave her friend behind. Diane thinks Ellen going straight is silly, as being Jay’s girlfriend “won’t get you into the bright lights, and that’s where you’ll find my pale body.” Again with the pale body! Love this movie.

That night, Jay’s fraternity crashes a business party with Diane and other party girls. The party is held in an apartment where a car elevator opens right into the parlour without even a door between the elevator and the apartment, just a velvet security rope. Everyone, even in the reviews from 1930, mentions how ridiculous this is, but I loved it.

Jay and his drunken frat rats are turned away at first but sneak in later, 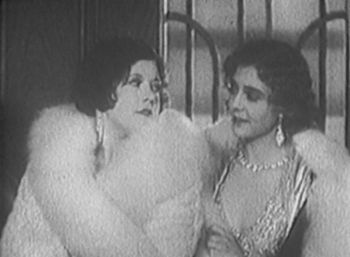 just as Diane is dumped into a fountain full of perfume. You don’t see what’s going on in the fountain, but you do see everyone staring and laughing, saying “It won’t be long now!” as Diane giggles and says “That tickles!” My stars, Marie, you sure outdid yourself in this film.

At the party, Diane’s rival Leeda (former model Judith Barrie) steals away Diane’s escort, a powerful businessman and competitor in the glass business. She says he has to fix a problem for her, and it’s so vague that it took me 20 minutes to realize the problem is that she’s pregnant. Leeda is a society girl who parties for extra cash because her own rich family doesn’t give her enough. She doesn’t want her mom to find out she’s pregnant and unmarried, so when Jay is spotted at the party, a plan is hatched to scam Jay into marrying her.

Jay wakes up the next morning hung over and with a crying Leeda in his apartment, but at least he’s in a lovely art deco bedroom: 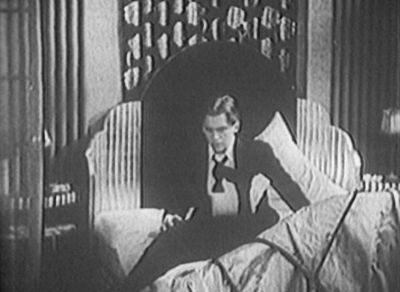 Leeda is crying because they spent the night together, so Jay does the honorable thing and marries her. Afterwards he finds out she was a party girl, already pregnant, and that his father’s client was the one who set it all up. Later, the client signs a new contract with his father and says it’s because he’s thankful to Roundtree’s son for getting the pregnant party girl off his back. Dad isn’t exactly pleased to hear this news.

One of the set pieces in Roundtree’s home is the same gate used in the Dorothy Sebastian photos I posted here. It’s not just a similar gate, it is unquestionably the exact same gate: 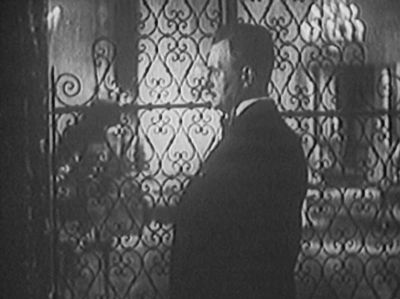 Ellen is heartbroken that Jay was tricked, but her party girl roommate Diane is having none of it. “Tricked my aaaa…nkle,” she says, insisting that no one is so naive as to marry a party girl out of honorable intentions. Speaking of honorable, this scene includes Marie using a vibrating machine while wearing a skin-tight black lacy teddy: 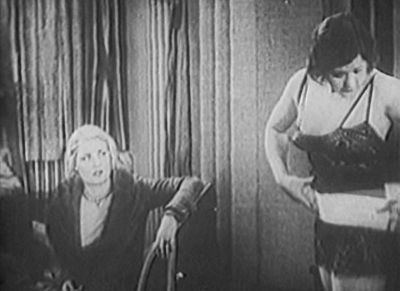 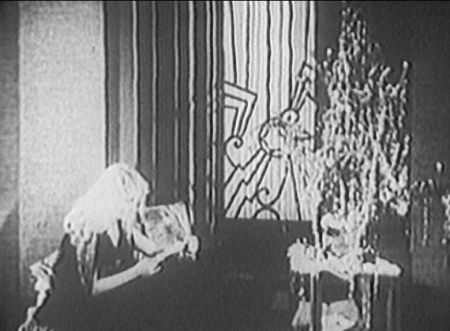 Ellen thinks back on memories of Jay, shown as superimposed clips of her and Jay canoeing at the lake. But soon those clips turn to stock footage of half-nude dancers, a polo game, and even what looks like some acrobats getting ready to perform at a circus. An early version of the “Naked Gun 2 1/2” sex scene, perchance?

Diane talks Ellen into coming to the party with her that night to cheer her up, so Ellen leaves her apartment for the party just as Leeda shows up to the apartment. I don’t understand why she’s there, but she is. The police close in on Leeda — again, I don’t know why — and she jumps out of the window and hurtles 8 million stories to the pavement below.

Which is why she’s unmarked and only slightly unconscious moments later as she’s brought back into the apartment lobby. Before she kicks off, she tells Jay that Ellen is at the party and the cops are about to raid it. The cops raid, Jay gets off by saying he’s The Jay Roundtree, and Ellen gets off because the undercover cop we haven’t heard about since 2 minutes into the movie verifies Ellen isn’t really a party girl. The end.

Mordaunt Hall is rapidly becoming one of my favorite contemporary reviewers for movies of this era. He states with his usual understated snark that “Party Girl”, which was playing at The Gaiety Theatre, has “humor [which] is often indelicate and at this holiday season it should be said that the Gaiety now is not the place to take children.” Indelicate my aaa…nkle.
***