This is ostensibly for the fabulously appointed art deco apartment series. Of course, this is not art deco; an exhaustive 3-minute search on the Internet informed me that these are fabulous examples of retro modernism.

Stark angles of the Venture compound at night. The building is not only based on the 1960s-era cartoons that the show spoofs, but on common 1950s architectural themes. See also The Horizon Hotel in Palm Springs, The Waikikian Hotel, or one of Bucky Fuller’s geodesic domes.

The 1000px versions of the screencaps included here were unfortunately lost to a server change. 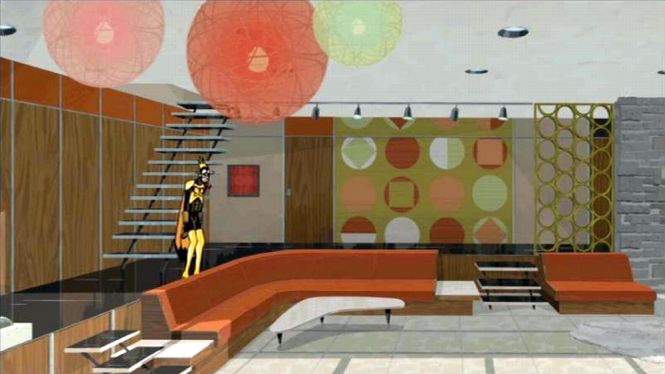 Delicious Danish Modern furniture. Those couches are fresh from cinema’s most notable 1960s bachelor pads; you can just imagine Jack Lemmon throwing his suit jacket on one just before showering and changing for a night on the town where he gropes so-called floozies and maybe slips something into their drink. When we were at a used furniture store back in the mid-1990s, I found a low-lying orange vinyl couch that looked just like these. It was gorgeous, but I knew our cats would destroy it, so I just sat on it for a while and sulked.

The olive circled divider to the right looks just like the kind of interior decor I recall a couple my parents were friends with having in the mid-1970s. Next to their divider was the most fabulously tacky cherub thing with fake rain — I think the “rain” was glycerin on thin strings that twirled about. It hung from an enormous gold chain. 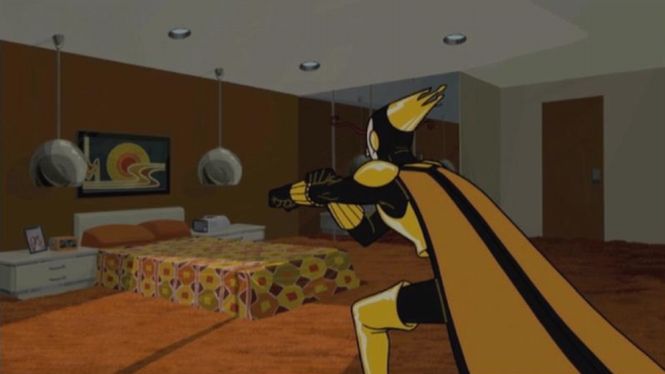 This is Rusty’s room, which looks like it was last updated in 1974, because it probably was. The style is straight out of the all-browns all-the-time 1970s designer handbook. A terrific example of vintage design can be found here at ouno with a sample of designer Elsbeth Kupferoth’s textile pattern. 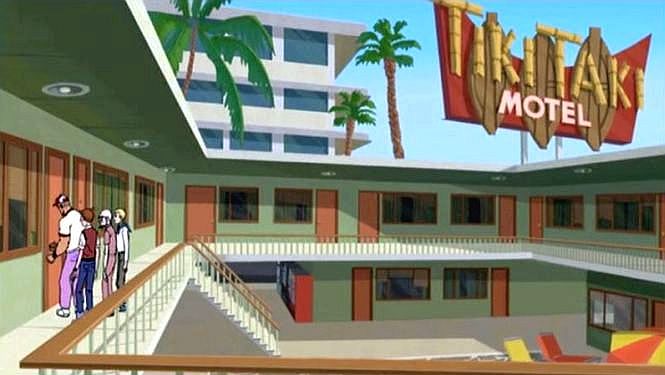 A tiki motel! You’ve probably already seen this at Mr. Bali Hai’s place, Eye of the Goof, but I couldn’t resist posting my own screencap. More can be found at The Swank Pad or at the lucious Roadside Architecture with several pages of tiki architecture. (Sadly, Eye of the Goof and Swank Pad are two of the several dozen blogs I’ve lost touch with over the years. Because I suck, that’s why.) 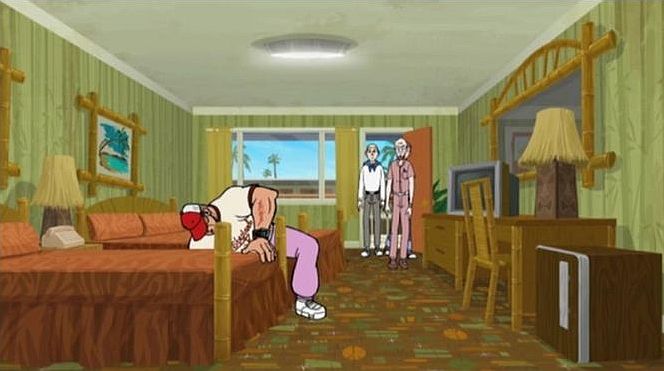 The motel interior. Just look at that carpet. It’s atomic!