All three of the Edna Mae Oliver “Hildegarde Withers” murder mystery vehicles were recently show on TCM in a little mini marathon. First up was The Penguin Pool Murder: 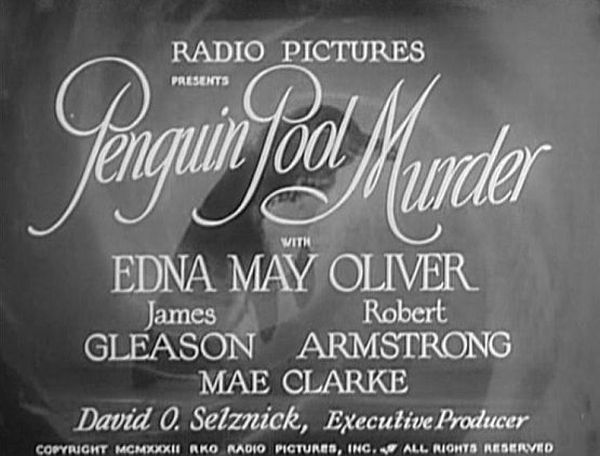 Anyhow, the Hildegarde Withers series. This series consists of six films that ran from 1932 to 1937, with only the first three starring Edna Mae Oliver, and the remaining three with Helen Broderick and Zasu Pitts. A seventh film starring Eve Arden in 1972 was made with the Hildegarde Withers character, and Billboard reported that a TV pilot called “The Amazing Miss Withers” was filmed in 1955, starring Agnes Moorehead. I have no idea if the pilot ever aired.  But despite four other actresses playing the role, Edna Mae is the definitive Hildegarde, and it’s because of her birthday in November that I managed to follow up “Penguin Pool” (1932) with “Murder on the Blackboard” (1934) and “Murder on a Honeymoon” (1935).

Hildegarde is a frumpy middle-aged schoolteacher who manages to get mixed up in murders on a regular basis, much to the chagrin of Police Inspector Oscar Piper (James Gleason). In the first film, “The Penguin Pool Murder,” Hildegarde is at the local aquarium with her students at the same time trophy wife Gwen Parker (Mae Clarke) is there to secretly meet her former lover Philip (Donald “Slightly Less Bland than Donald Woods” Cook). Gwen’s rich husband Gerald is anonymously alerted to their assignation and confronts them, only to be clocked in the face by Philip. He’s left unconscious near a large tank but, moments later, he’s found in the tank, dead and doing that creepy half-floating kind of thing corpses like to do. Gwen and Philip protest their innocence. Complicating matters are the aquarium manager’s motive to kill Gerald Parker, the presence of a notorious criminal at the aquarium, and Hildegarde’s own hatpin being used in the crime. 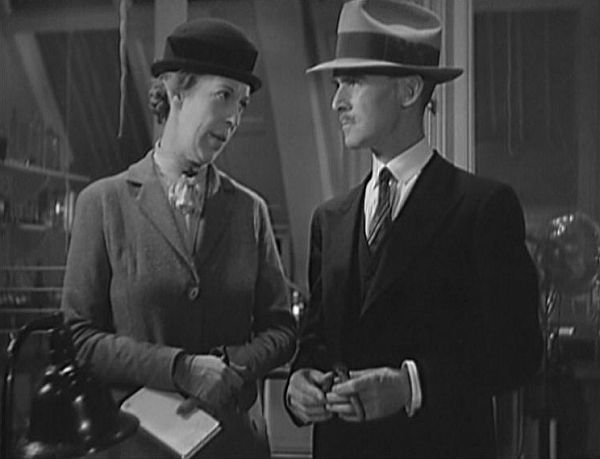 The banter between Edna Mae and James Gleason is the primary reason to watch these films. Edna Mae, however, has a style that at best can be called old fashioned. She looks straight at the camera while delivering many of her punchlines, and her stuffy and judgmental reactions are delivered almost identically throughout the film. Gleason, too, had very little variety in his standard flustered performance. I can only assume both were directed to perform this way specifically, as Edna Mae, while irritating, does not mug for the camera constantly in her other films… but I say that with the caveat that I have not seen her earlier Wheeler and Woolsey collaborations.

At the end of “Penguin Pool,” once the murderer is revealed, the Police Inspector grabs Hildegarde and they run off to get married. Married! That’s the real reason I wanted to watch the next two films, to see if they really did get married or not. 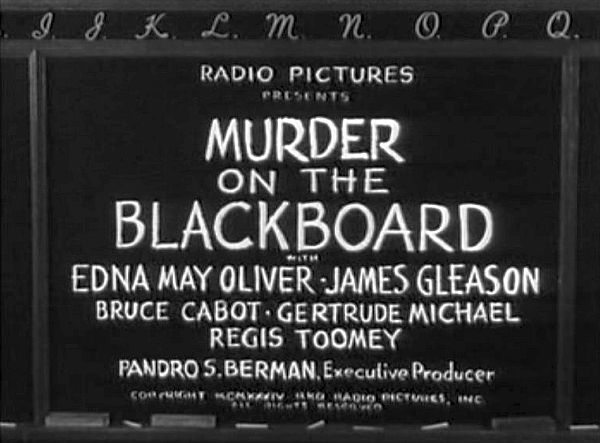 Short answer: No. Er, that’s the long answer, too. The second installment of the series was “Murder on the Blackboard,” released over a year and a half after “Penguin Pool” and with no mention of Hildy and Oscar being married or even involved. 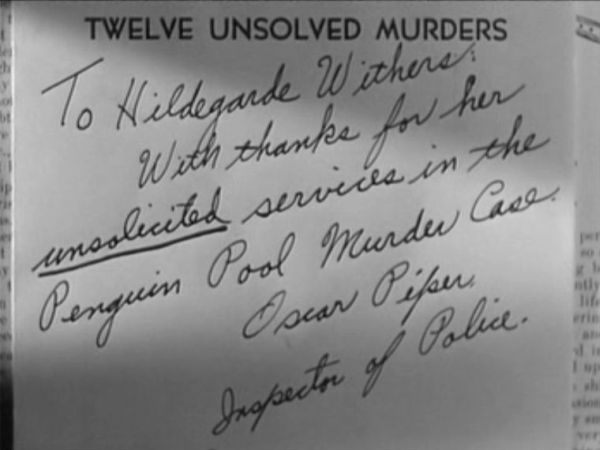 There is definite reference to “Penguin Pool” in this film, so while there was a deliberate link to “Penguin Pool,” I guess the idea introduced in the first film that Hildy and Oscar would be married was discarded. Some mention of it would have been nice, though, just to get it out of the way. 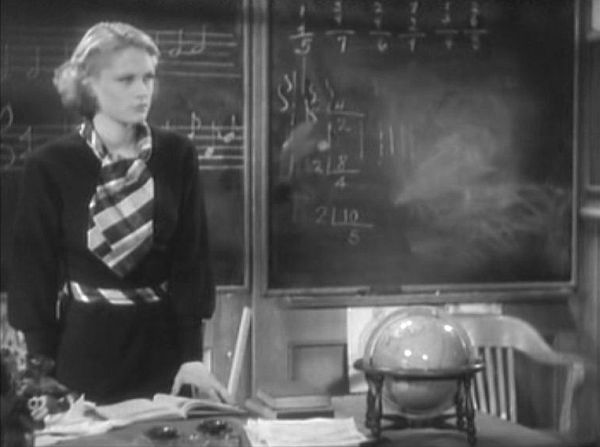 MotB takes place at Hildegarde’s grade school, where fellow teacher Louise is having some undisclosed trouble. She carries a gun with her to work and is frightened and worried. We learn that Louise used to date the same man school secretary Jane is now engaged to, and also that the school janitor is owed money by Louise. Poor Louise is found shot in the head by Hildegarde after school hours. To add insult to injury, someone stole her body and put it in the school furnace while Hildegarde and the police weren’t looking. 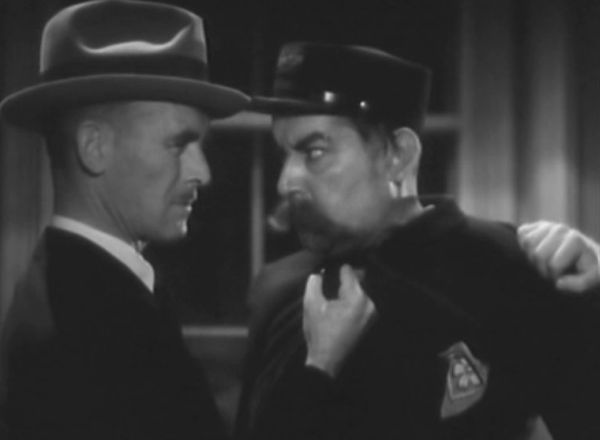 He looks like a Keystone Kop, but he’s actually the angry, drunken German janitor. In “The Black Room” (1935), one of my favorite Karloff films, he plays “Josef, Resentful Villager with Heavy Moustache” according to the IMDb. That may or may not be true, given the mistake in credits for the third Hildy movie… but more on that in a minute.

I think that, of the three Oliver films in this series, MotB is my favorite, even though this film is not 100% Regis Toomey free. In general, I like my films to be completely free of Toomeys, Herberts, and Van Pattens, although I will occasionally make an exception. The plot is a little grittier and the dialogue is more naturally witty as opposed to forced as the other two films sometimes are; the best line occurs when Hildegard tips a taxi driver a small amount and he balks. “You’re a taxi driver, not a gigolo,” she reminds him. Ha! 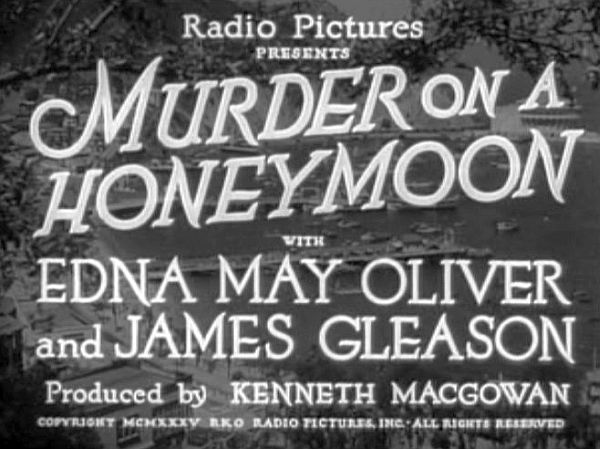 The third installment is “Murder on a Honeymoon,” released less than a year after MotB and with a decidedly implausible plot. Hildy travels to Catalina Island on vacation. While on a small sea plane, a loudmouthed jerk seated near her dies inexplicably, and Hildegarde is sure it’s murder. The local authorities aren’t interested, so she contacts Oscar back in New York (I think), and he flies down to Catalina to solve the case. 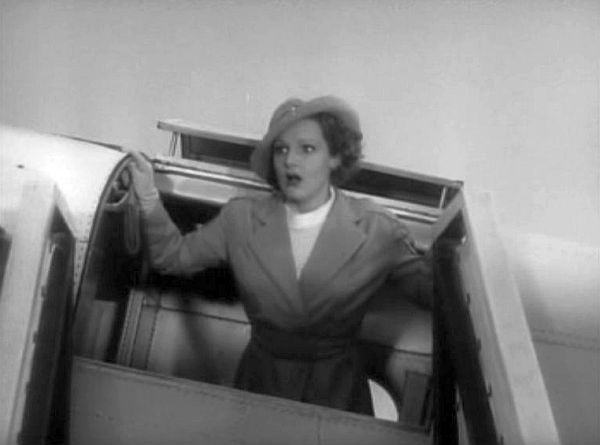 Writer Robert Benchley and actress Lola Lane cannot save this movie, although it has a lot of potential and could have been the best of the bunch. The mystery part of the plot is not bad, just poorly executed. Lola is hardly in the film at all, which makes no sense, as she’s the undeniable star in every scene she’s in. She just commands the camera away from everyone else by her mere presence. In films like “Hollywood Hotel,” she could be part of an ensemble because much of the rest of the cast had the same cinematic charisma, but in MoaH she unintentionally steals her scenes. I’m going to go out on a limb here and state that the problem with this film is the direction; to paraphrase a famous quote, as a director, Lloyd Corrigan is a great character actor. 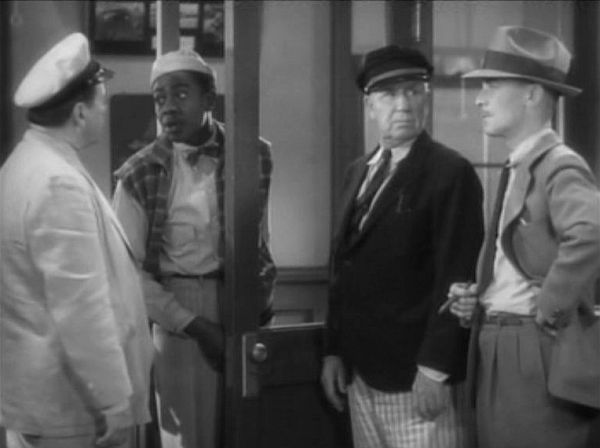 Speaking of character actors, Willie Best is credited in this film as “Sleep ‘n’ Eat.” I am not joking: That was his official name in several films. While MoaH was the last film where he was credited with this unbelievably racist name, he spent much of the 1930s and 40s playing characters with such progressive names as Drowsy, Sleepy, Sambo, Catfish, and Warts. Apparently, the studio liked it that way.

Also also plus, the IMDb has an actor called “Mr. The Dog Jones” as “Sleep ‘n’ Eats” in an uncredited part. Lord have mercy, some excitable IMDb contributor got confused again. The dog’s name in the movie is “Mr. Jones,” and of course “Sleep ‘n’ Eat” (not plural) is the alias of actor Willie Best, not the dog — I guess those two facts jumbled together comprise the bizarre IMDb credit. Looks like I’ll be back on the IMDb trying to get that corrected, too. And it’s been there since at least 2004! Remember that when using the IMDb for a reference, kids. 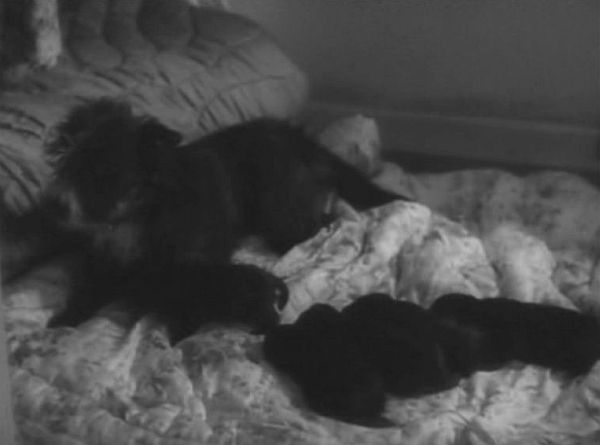 I kind of feel bad for the person who submitted that credit, though. Imagine thinking how cute the name “Sleep ‘n’ Eat” is for a dog and submitting it to the IMDb without any idea that it was actually a demeaning, racist name given to a human actor. In a way, I hope they never discover their mistake. 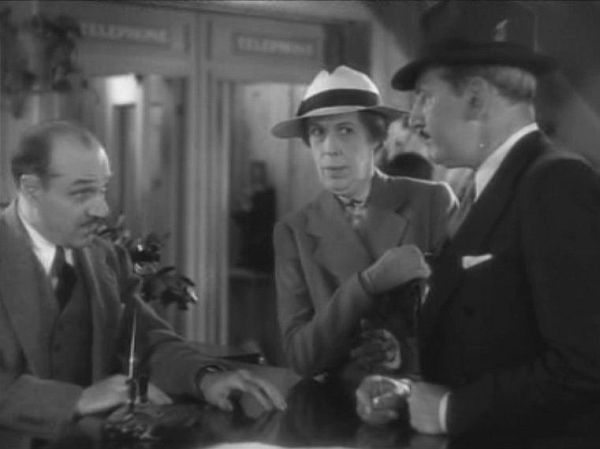 These three Hildegarde Winters movies are a mixed bag, and their entertainment value is heavily dependent on how much you like Oliver and Gleason. The mysteries themselves were a bit dull, nearly railroad plots, so the series lacks the charm of other series’ like The Saint or The Lone Wolf. And, unlike George Sanders or Warren William, Edna Mae is best in small doses.