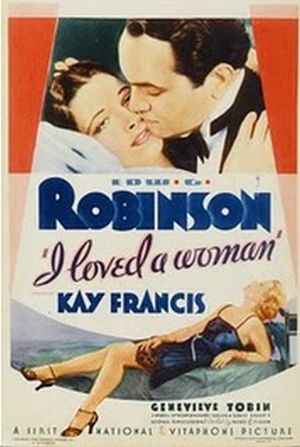 Kay Francis made a lot of movies that should have been mediocre, but Kay’s presence and her influence at the studio meant she often had great costars and a decent director at her disposal, elevating what was supposed to be a woman’s weepy into a classic film. Unfortunately, neither of the two Kay movies I saw lately were classics, and it’s been a little difficult for me to figure out exactly where they failed. These are not bad films, but they seem to miss their intended mark.

“I Loved a Woman” (1933) stars Edward G. Robinson, Kay Francis, and Genevieve Tobin in a weird but ultimately somewhat boring love triangle. John Hayden (played by Eddie G) is a rich young man flitting about Europe in the 1880s, studying art and unwilling to go back home to a management job in his dad’s meat packing plant. Dad dies, of course, forcing John to back, full of liberal ideals that piss off the stockholders. He marries Martha Hayden (Tobin), the daughter of a rich competitor. His business starts to lose money because he’s spending cash on making workers safer, making the meat safer, and other silly things. His father-in-law lends him some money with the caveat that John, if he can’t pay it back, will forfeit his business to the father-in-law. That’s what the father-in-law wants, anyway, so he considers this a great investment.

A note about that poster: Genevieve Tobin never appears in skimpy lingerie in the film. She plays a woman born in roughly 1870 and the film takes place mostly from about 1890-1915, so there’s no way she’d be a 25-year-old blonde in 1933, lounging around in her skimpies like she was co-starring in “Night Nurse” or something. That poster is all sex, but there is none to be had in “I Loved a Woman.”

Soon after, Laura McDonald (Kay), a budding opera singer, approaches John to be her patron in the arts. John becomes smitten and happily finances her while she encourages him to go out and make all the money he can, to be ruthless and successful. They postpone their affair while she’s in Europe studying and performing, and he stays in the States and screws over anyone he can to make a buck. This includes the U.S. soldiers in the Spanish-American war; he sells rotten meat to the government for war rations. He pays off the father-in-law’s loan and makes his business the most profitable in the industry, but incurs the wrath of Teddy Roosevelt, what with killing soldiers from tainted meat and all. 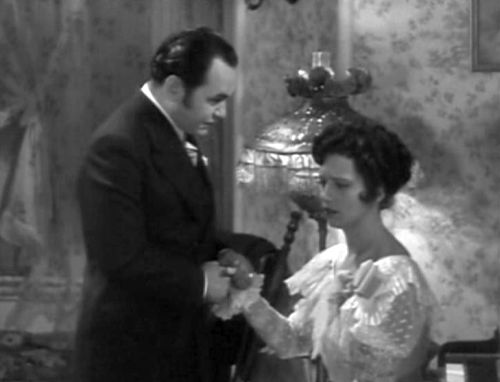 John uses his influence to get Roosevelt made Vice President instead of President, because as President he would have gone after John and the other war profiteers. Keeping him as VP means he won’t have enough influence to bother the meat industry. But then McKinley has the gall to get assassinated, making Roosevelt president and leading to John’s indictment. Meanwhile, his wife is cold and uncaring while his lover Laura is sleeping around with other men. After being acquitted of the charges, he flees back to Europe and stays there in exile. Laura returns to him when they’re both older, but he’s fallen into dementia and doesn’t recognize her. FIN.

OK, this is a weird film, in that we’re supposed to sympathize with a man who sold our soldiers meat so rotten it killed some of them. Seriously? Why? I guess we were supposed to think Laura drove him to it because she was selfish, but in reality the film is more than obvious that other meat packing businessmen were already using iffy meat. John just took it to a new level, Laura had nothing to do with that specific choice. Kay Francis’ Laura kind of flits in and out of the film without landing, disappearing for extended sequences, and she’s not in it long enough to convince me that she had such an affect on John.

What frustrated me the most was that there were 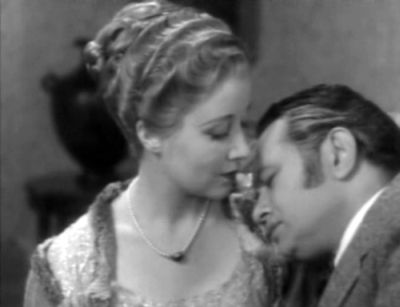 three characters and three stories in this movie that were all interesting, but there just wasn’t enough time to devote to all of them. Laura was fascinating, a woman who did what she wanted and got where she wanted to go regardless of what the men around her said or did. Martha, the cold wife who doesn’t understand her husband, was right out of “The Little Foxes.” And John’s story line about the company financially failing when he tried to do the right thing but succeeding when he became a greedy asshole was a good one. I wish they had made 2 or 3 movies out of this, or a longer movie with more time devoted to each character. Heck, more time devoted to just one character would have been fine. As it was, Laura and Martha were neglected at the expense of the entire film.

It didn’t surprise me much that Alfred E. Green directed this. His resume is filled with films that can only be described as almost good without actually being good. 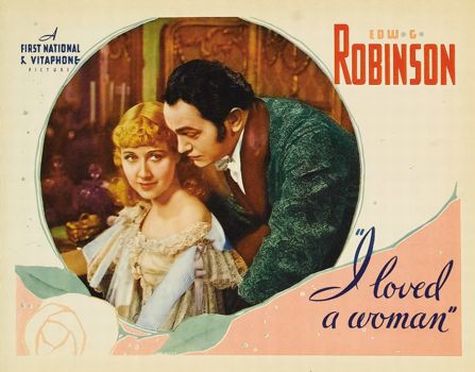 “Living on Velvet” (1935) concerns Terry Parker (George Brent), a pilot who, for reasons never explained, allows his plane to run out of fuel while he’s transporting his family to an event. Did he forget to fill up? Mechanical trouble? Who knows. His mother, father, and sister die instantly in the ensuing crash while he’s left almost unscathed. From that moment on, Terry becomes a nutty daredevil, taunting death, caring about nothing, attached to no one. His friend Walter (Warren William) gets him out of trouble after disrupting an air show for the lulz. Terry explains to Walter that he thinks he should have died with his family, that because he didn’t his time on earth is now “living on velvet” time.

Later that night, Walter takes his emotionally unstable pal to a party hosted by Amy (Kay Francis), the woman Walter loves and wants to marry. Amy and Terry immediately fall for each other. Amy decides she can save Terry, change him, keep him from going completely off the rails. Her aunt disapproves of the marriage and disinherits her. Walter loves her so much he helps her marry another man and even gives them a house.

Terry is a very difficult man to deal with. Amy sends him out for much needed groceries and he spends their money on caviar instead, not realizing what he’s done wrong. He doesn’t really try to find a job, either. Just when they’re almost out of money, Walter sends them notice that Terry’s stock has jumped in price, giving them $8000. Amy buys a bunch of household items she has wanted for over a year, but comes home to find Terry has hired people to tear up their back yard and turn it into an airplane runway. He’s spent $10K on a runway and used plane, and he plans on going into business by flying commuters to Wall Street. So the $8K is gone, and now they’re $2K in the hole, too. Again, he has no clue he’s done anything wrong. When Amy says she’s disappointed, he says “Gee, that’s tough, but that’s business for ya.” 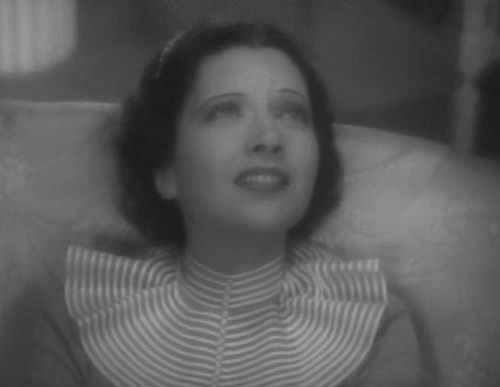 Also, where the heck was he going to land when he flew people to Wall Street? Was that part of the craziness of the idea? And I want to know if he was an empty-headed dingdong before the crash killed his family, because maybe it was his mental illness that caused him to forget to fuel up the plane.

It was interesting that they had Amy’s disappointment be over buying things like curtains and furniture for the home when their home was just fine before they got the $8000. She simply says she would be able to get some things around the house she has been wanting, but it’s obvious there wasn’t anything they needed. There wasn’t a single stick of broken or cobbled together furniture, they weren’t using blankets for curtains or cinder blocks for shelves or anything. I had to wonder what the intent was with that choice. Was “Living on Velvet” trying to say Amy’s expenditure wasn’t that important, or maybe trying to directly appeal to the women this audience was aimed at?

At any rate, after Terry insists she christen his new plane with a bottle of ketchup (true story), Amy leaves his ass, but says it’s because she has failed him. No, dear, it’s because he’s a bargain-sized nutbar. She is so unhappy without him she now considers herself “living on velvet,” and returns to her aunt and her lavish parties. Terry gets into another wreck, a car wreck this time, and gets conked on the head. Walter intervenes and tells Amy about the crash, and after Terry is healed it turns out he’s not so crazy anymore. I think, but cannot be sure, that we’re supposed to believe Terry went nutty because of a head blow, and another head blow in the 2nd crash cured him. I think. 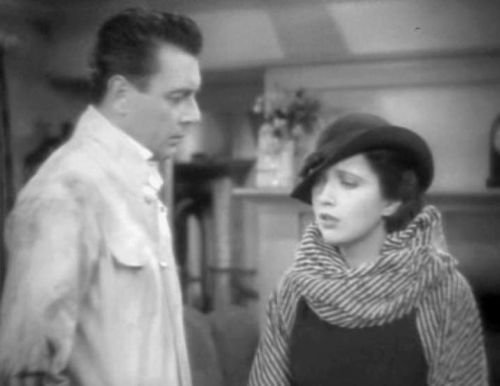 While I was writing this I realized how silly the movie sounds, but it’s very good up to a point. I think Warren William is somewhat wasted in the movie, and George Brent’s character made me want to reach through the screen and smother the little bastard. On one hand, that’s good, because it means he played the part well; on the other hand, I got irritated by the movie because I was irritated by Terry. And Amy’s reasoning for trying to fix Terry and later leaving him was a little specious. But there was a lot of good dialogue in the film, Terry’s character was at least one of the most interesting I’ve seen in a film of this era, and there’s a scene where Warren William shaves George Brent that could potentially launch a thousand fanfics.