Before I blah blah about randomness, I want to mention that anyone who wants to send a note to Ivan of Thrilling Days of Yesteryear while he chases nurses a la Harpo Marx recuperates in hospital can find ways to do so here.

A few months ago I posted about “Night Parade” (1929) and mentioned Ann Pennington, the sexy dancer at the wild party in the insanely fabulous art deco apartment. At the bottom of the post I had a photo of Ann Pennington in a costume designed by Ertl. I have since found another photo of the same costume… 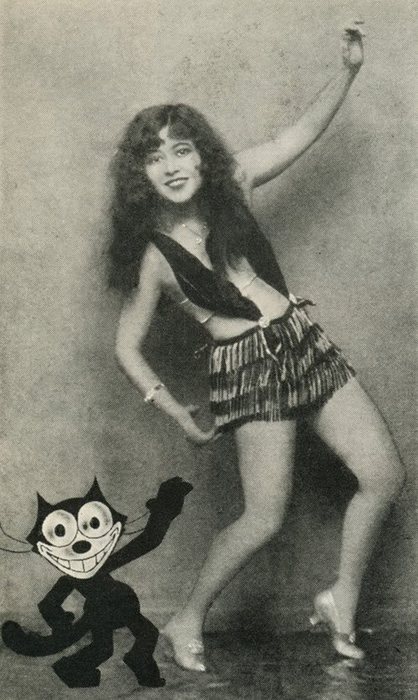 with Krazy Kat Felix the Cat! I just gotta ask: What led up to this? Operator 99 tells us here! Highly recommended, and not just for the hot mostly-nude Ann Pennington photo at the bottom of the entry.

Oh hey, I just realized that the name of the guy Trudy thinks she married in “Miracle of Morgan’s Creek” is a Krazy Kat joke: Ignatz Ratzkywatzky. Dude. Too bad Krazy Kat doesn’t have anything to do with this photo, because it’s Felix the Cat and I was confused until Scott corrected me. Mutter mutter. Anyway, moving on:

I’ve mentioned The Secret Life of Objects several times. One of the props discussed extensively in the article is the statue “Zephyr Dancing with Flora”, which appeared in many Universal films. I think I found another Universal picture it’s in: “Thoroughly Modern Millie.”

Muzzy’s house has a lot of statuary in and around it. Just after the (in)famous “Jazz Baby” sequence, Muzzy and one of her admirers are on a back patio that faces a statue and shrubbery-lined walk. One of those statues looks a lot like “Zephyr”. You can’t see the statue well at any point, it only appears in the background, but here’s a decent shot: 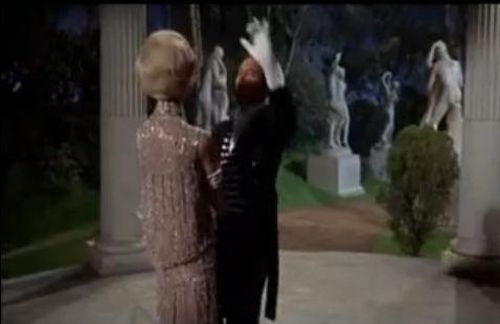 Just to the right of tux guy’s head is the statue. Later Muzzie and Millie have walked down the path and are on the other side of the statue: 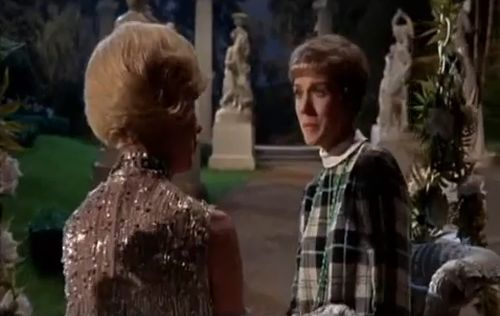 It’s just to the right of Julie Andrews’ head.

I enlarged these pics but they distorted so badly I’m not going to bother posting the enlargements — the caps I got were from YouTube, so they’re not exactly high quality. However, if you know what landmarks to look for, when you enlarge the image you can see Flora’s hair, her skirt, the basket between Zephyr and Flora. I’m pretty convinced.

Basically, the point of this is that I think finding re-used props is seriously neat.