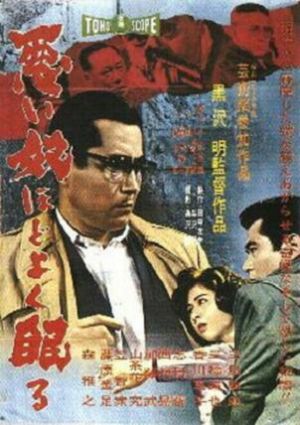 Between the recent Akira Kurosawa month on TCM and the always-changing order of my rental queue, I have seen a lot of Kurosawa’s films. “The Bad Sleep Well” was one of the first. Called “Kurosawa’s unofficial Hamlet“ by critic Ed Park, I found the movie to go far beyond the usual adjectives attached to it: Cynical, realist, obsessive. It is also devastating. This movie ruined my life. It ripped out my heart and flattened it with a heavy heel, grinding it into the concrete and then kicking the pieces apart with its pointed toe.

There are moments in film that are difficult to watch. They hit you just right, they move you to an extreme that’s uncomfortable. In “The Bad Sleep Well”, there is a moment you don’t see. Someone’s death, the death of a man whose life-ruining obsessive hate still wasn’t enough to right the wrongs done; a death not shown save a lingering shot of an empty, ruined, bloody Studebaker. The worst thing I have ever seen on screen is not seeing that death, only seeing it acted out by a man who can never be himself again.

It’s a cliche to say a movie changed your life. Neophytes say that, people whose lives are so devoid of strong feeling that even the slightest stirring of emotion causes them to believe their lives are irrevocably altered. So it’s not easy for me to say, but it’s the truth that “The Bad Sleep Well” changed my life. It dashed the last few futile hopes for humankind I thought I had. I should be upset about that, but I’m not. I’m just stunned. It was a long time coming, although the slow decline of my optimism by inches is what I always imagined, not one swift sword to the neck.

Robert Osborne said in an outro to “High and Low” that Kurosawa always tried to answer one question in his films: Why can’t people be happy? Well, I know why, and despite his protestations, Kurosawa knew, too.