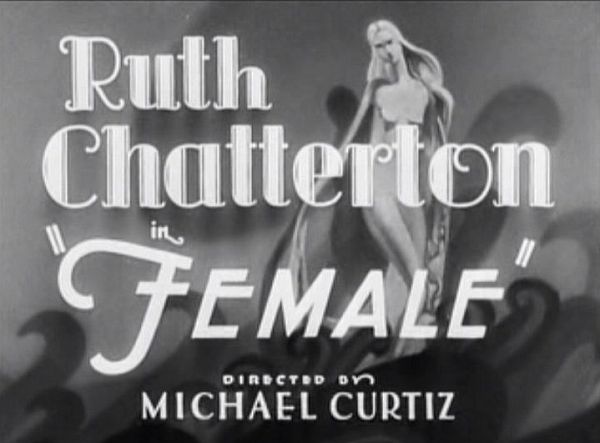 And now, on to the show. There isn’t much I can say about “Female” (1933) that my beloved Mordaunt Hall hasn’t already said. I agree completely with Hall’s assessment that some of the scenes undermined the otherwise terrific characterization of Alison, and while watching the film I kept thinking that this would be great if it were only directed by William Wellman. Except it turns out he did direct most of it, minus the scenes with Johnny Mack Brown and a few other scenes William Dieterle had done at the beginning of the shoot. Hrm.

My main complaint is that we all know the reformation of the evil fallen woman is coming, but I prefer movies where the comeuppance is basically a brief scene tacked onto the end of the film. It gives me the maximum enjoyment of juicy female characters, and movies are all about me, as you well know. I love “Baby Face”, for example, where it looks like they intended a much grittier ending but then quickly pasted on the ambulance scene (with Stanwyck in a hairdo that doesn’t quite match what she was wearing moments earlier). Or “Red Headed Woman” with the brief comedy ending that comes out of nowhere. Alison started to realize the error of her ways far too soon in “Female”, and that’s a shame.

But there was some delicious art deco for our repeated consumption. So delicious. 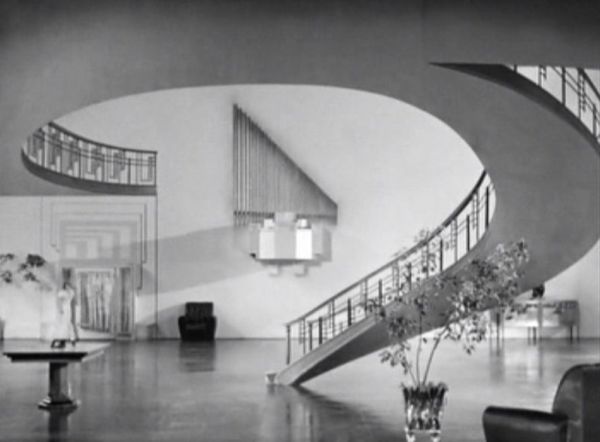 That big thing at the top center is an organ (heh). Alison occasionally hires an organist (heh heh) to play for her and her guests.

The sets and art direction were by Jack Okey and G.W. Berntsen. Okey was art director on “The Rich Are Always With Us” which, as you may remember, yoinked a lamp from “Night Parade” for its set. I believe some decor from “Night Parade” was also yoinked for this film, specifically two black and silver deco pieces just behind Johnny Mack Brown when he’s sitting on the floor with Chatterton. In retrospect, this makes very little sense, since “Night Parade” is RKO while “The Rich” and “Female” are Warner, but maybe RKO sold off some of its props and Warner grabbed them. Don’t quote me, I’m completely making that up. 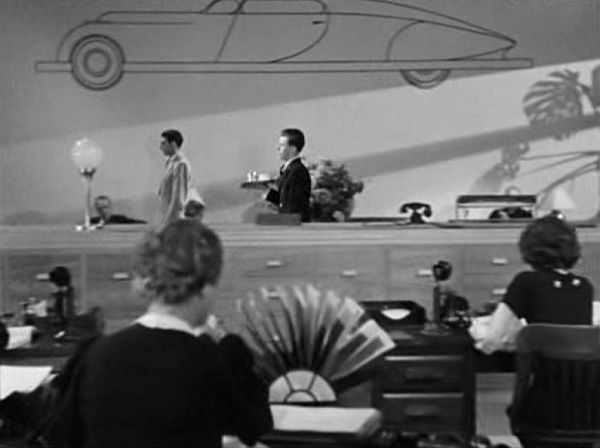 Love this. Love the stylized car on the wall, love how the office plant’s shadow and the Rolodex on the desk form sharp stylized lines within the scene. 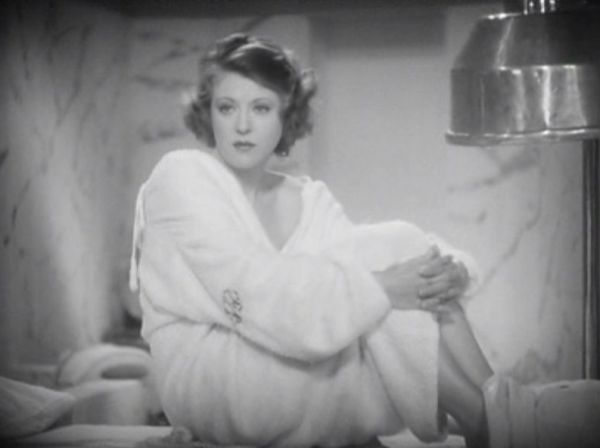 Sigh. Ruth is so pretty. 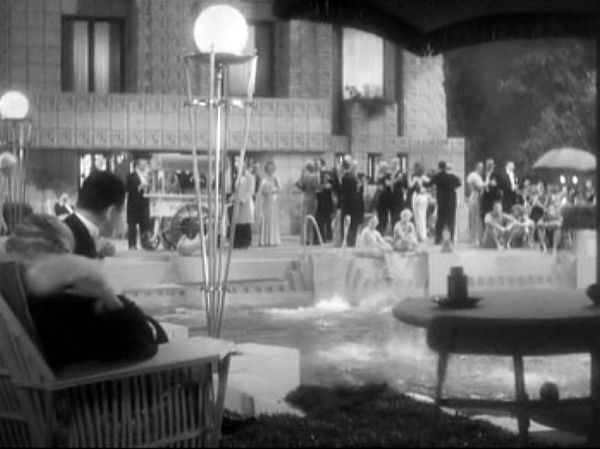 This is a set. Can you believe it? A set. It’s not even a real home they used to shoot at, oh no, it’s just some fake enormous, fabulous set that no one really ever got to enjoy. The IMDb says it’s from “Footlight Parade”, but the IMDb also says Marie Prevost is in “The Locked Door” as “roomate” [sic] despite multiple attempts to correct this, so it’s safest to always assume the IMDb is wrong. 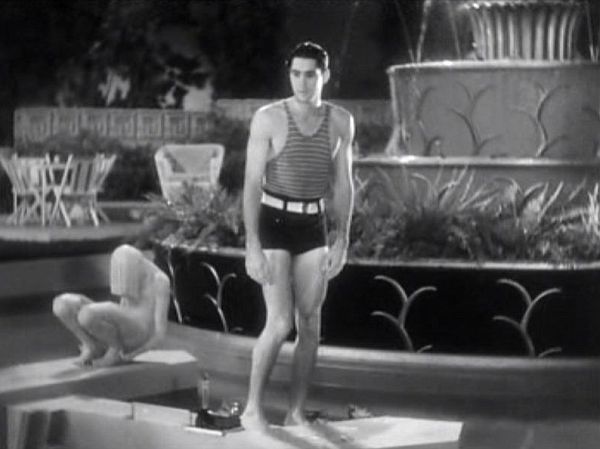 Fountain plus strange statue plus beefcake. What I like about the character of Alison is that she doesn’t just sleep with men because they’re great big hunks of stuff. Mr. Swimsuit Calendar here was rather immature and clueless, so she lost interest. Of course, she paid him off and sent him to Paris to study art, but she certainly could have bagged him if she had wanted to. 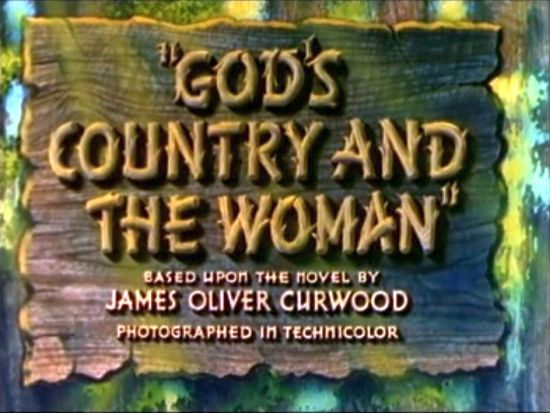 “God’s Country and the Woman” (1937) was on the same DVD I recorded “Female” on, both grabbed during a recent George Brent marathon early one morning. Boy, Brent sure spent a lot of time playing guys who wanted to make women act like real women, didn’t he? That’s pretty much the plot of both these films, although they take 2 entirely different directions to get to their shared goal.

Despite not being particularly interested in this film, there is always an unofficial El Brendel project here at House of SBBN, and the El-man is in GCATW. In Technicolor. So we had to see it, darlings. You do understand. 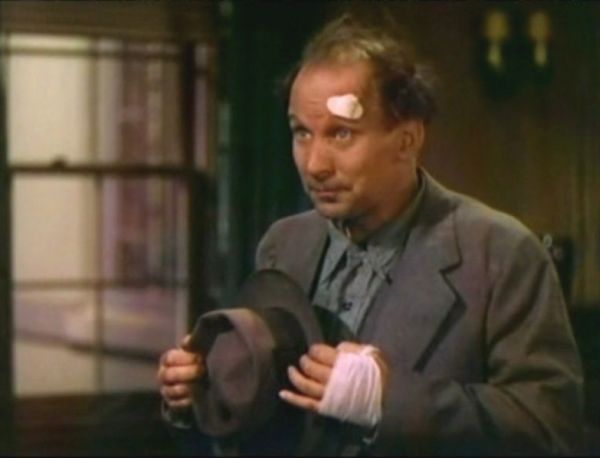 El is… er, rather thinning, apparently. This is odd, because he’s got a full head of luxurious hair just a couple of years prior to this, and I didn’t think he was in a toupee in “If I Had My Way.” Did they shave him down for the part? He’s in a hat most of the time, so that doesn’t make sense.

Another thing that doesn’t make sense is that El plays a Scandinavian named Ole (he played an Ole/Ollie/Olson in something like 3 dozen movies throughout his career), but Alan Hale plays another Scandinavian. Hale’s character is of Finnish origin, and it’s a much larger role than El’s. He gets all the ethnic jokes, even has 2 “yumpin'” lines. Poor El.

This movie was so obviously a Bette Davis vehicle that I wasn’t shocked in the least to learn this was the WB film Bette refused to do before she ran off to England and began the infamous lawsuit. The story of “God’s Country” is pretty basic: Steve Russett (George Brent) is an irresponsible womanizing playboy (no!) whose brother, a lumber company owner, tries to straighten him out. Through wacky hijinks, Steve is stranded far north at a competing lumber company owned by Jo Barton (Beverly Roberts). Russett pretends to be someone else and works at Barton’s company, all the while chastising her for not acting like a woman, not running the company properly, etc. etc. Meanwhile, Steve’s brother cutts off supplies and logging lanes to try to force Jo into selling her company to him. Steve and Jo fall in love, she gets mad when she finds out he’s a Russett, he leaves, then he comes back to save the day.

This is all padded out with tons and tons of logging footage, some of it used for more than once scene. This is WB’s first full-on Technicolor movie, though, so that’s neat. It’s got a whopping three full strips of glorious color! None of that 2-strip nonsense here, no sir.

Very little happens in the city in this film, but the brief glimpse we get of the city (and/or city sets) is nice. 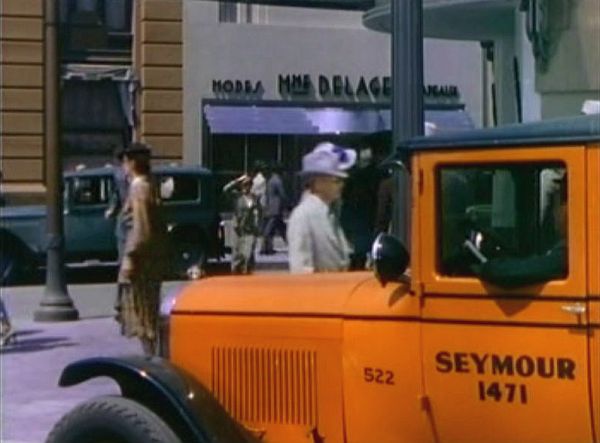 I kinda think they painted the cabs orange to show off the Technicolor. You’ll notice the greys look purple, which was true throughout the film, and rather distracting. 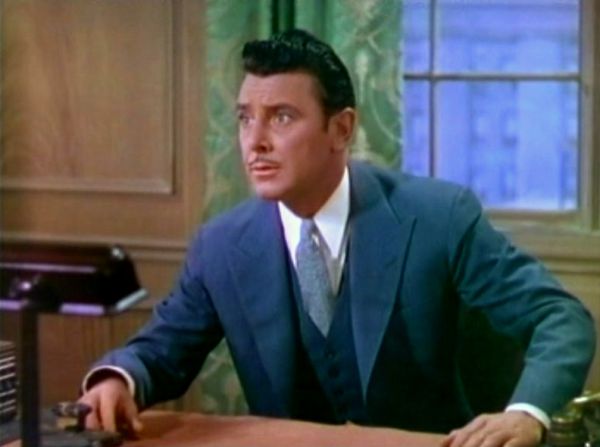 I fiddled with the blue and red saturation on this one. Eh, might as well. And someone tell George to loosen his corset, his eyes are bulging out.