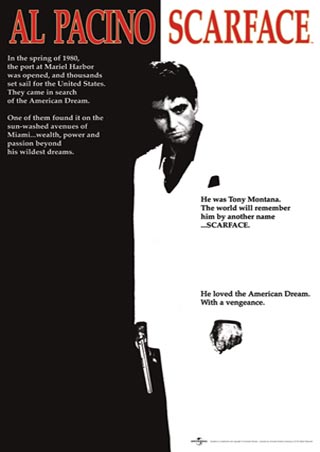 There are a lot of classic and must-see films I haven’t seen yet. Time and life has its limits, and that’s the excuse I’m going to stand by when I’m asked why it took me until 2010 to watch “Scarface” (1983).

I am quite chagrined by this fact, don’t get me wrong. As I was watching this movie, I discovered “Scarface” was influenced by the “Godfather” films and Hitchcock — this is DePalma, after all — but I also realized that the reverse was true, that dozens of films have been influenced by “Scarface,” especially Quentin Tarantino’s films. In the same way you cannot completely get “Jackie Brown” without having seen “Coffy” or “Foxy Brown,” you can’t fully understand “Pulp Fiction” without having seen “Scarface.” Huh. Who knew.

Is now a good time to mention I still haven’t seen the original 1932 version? I don’t know why, it was on TCM about 500 times in the last year and it has Boris Karloff. Again, the universe has seen fit to create limits to our time, and that’s my excuse.

There is nothing I can say about “Scarface” that hasn’t already been said. I was prepared for a lot more gore. Not that there isn’t plenty already, but like “Bonnie and Clyde” before it, while it was excessive for the time it has been far surpassed since. I was relatively comfortable with the gore, which was nice as I’ve recently been grossed the hell out by a season 4 “X-Files” episode and was in no mood to feel faint and nauseous again.

The film has some terrific points, mainly in how it captured the early 1980s culture so well. Most performances were terrific, from the top-billed stars to the smaller parts. But was anyone else irritated by all the Italian-Americans playing Cubans with iffy accents and overuse of the word “mang?”

Also, I loved the cinematography and set design. Modern films often don’t focus on these elements much, not like in older films where every set was fabulous. Frank Lopez’ apartment is a futuristic wonder:

While watching the final scene, I caught a glimpse of the statues mentioned in the article The Secret Life of Objects, which I’ve linked to before and recommend highly if you haven’t read it yet. So I capped this shot of the statue, shown on the right:

only to go back to the article and find that they capped the exact same moment. Other than the color saturation, it’s the same. Completely unintentional on my part, although I can’t vouch for the intentions of my unconscious. 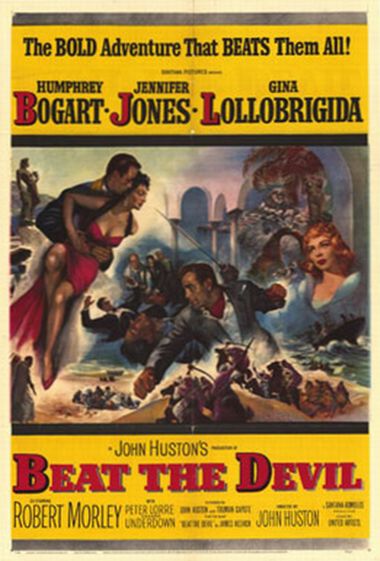 “Beat the Devil” (1953 per IMDb, 1954 per TCMdb) was on TCM a million times recently and yet, somehow, I never caught all of it. I rented the DVD and discovered the film is the public domain, which meant the print the DVD was made from was poor quality. Lots of scenes were too dark, there were serious saturation and bleeding issues, and in a couple of spots there were tracking issues from the tapes the film was dubbed off of. I can’t recommend the Westlake DVD version; perhaps some others out there are better. If you want to see “Beat the Devil,” try to find a copy from TCM or wait until it’s on again.

This was a wonderful film, expertly manipulated by John Huston and almost too clever for its own good. If you’ve seen “Beat the Devil” you’ll know how funny the poster is. It presents the film as though it was “Duel in the Sun” or some such melodramatic action flick. Instead, “Beat the Devil” is a spoof of crime capers, quite honestly a spoof of films like Huston’s own “Maltese Falcon.”

My first reaction was surprise, though, because Bogart and Lorre — who had both been so beautiful in 1941’s “Falcon” — looked decades older in “Devil” despite the passing of only 12 years between the films. Jennifer Jones, too, looked 15 years older than she had a mere 4 years earlier in “Madame Bovary.” Plus she had a weird lip movement issue with her upper lip, so much so I kept thinking I was watching Gloria Grahame talk.

Speaking of mouth movements, I noticed Bogey having some issues with his mouth and teeth. The IMDb says he had been in a bad car accident during filming, injuring his face and mouth severely, and had to be dubbed by a mimic: Peter Sellers. However, other sites indicate that Bogart was simply unavailable for dubbing, and Sellers is reported in The Life and Death of Peter Sellers to have said he dubbed in Bogart plus 3 other voices during post-production, with no mention of Bogey needing specific help because of injuries.

Early in the film, there is a scene which is so similar to a scene in “The Maltese Falcon” with Sam Spade, Gutman, Cairo, and Wilmer that I worried 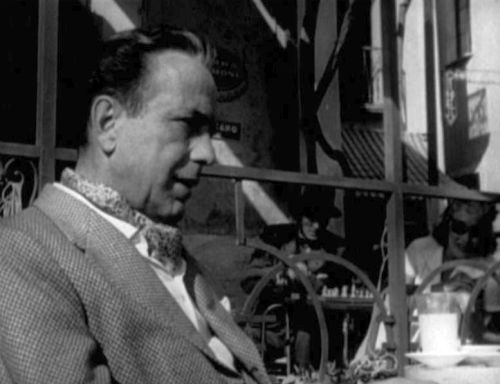 this was a case of a director rehashing his prior work, something that happens with alarming frequency. I was happy to find out my worries were unfounded as it became clear this was a satire. In the film, Huston carefully omits a few details and doesn’t let the audience know entirely what is going on, keeping us a little unsteady, a little on edge the entire time. There is a wonderful scene where Jennifer Jones and Gina Lollobrigida talk shop, as it were, and another scene where the principals are being questioned by officials in a Northern African detention center that I swear to you was directly mimicked in “Topkapi” (1964).

Both “Scarface” and “Beat the Devil” are considered cult films, but I have to say I don’t know why. They are both excellent films, influential and terrific, and plopping them into the “cult” category merely dilutes the idea of what “cult” really means.