This post is my entry for the Ida Lupino Blogathon hosted by the Miss Ida Lupino blog. Don’t forget to visit the other fine blogs who are participating! 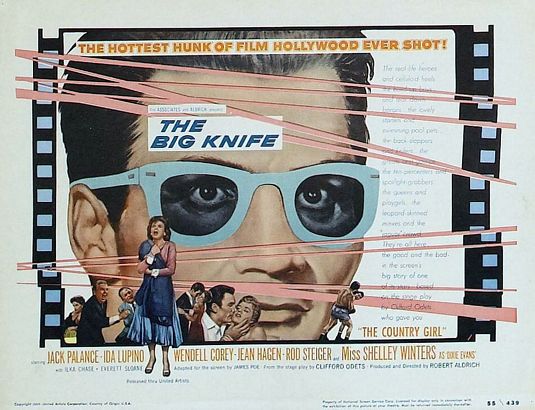 Clifford Odets’ vicious drama The Big Knife is a Tinseltown Macbeth, part Hollywood exposé and part exercise in self-aggrandization. Charles Castle, enormously popular film actor, says halfway through the film that Macbeth is an allegory about a man systematically killing all the better parts of himself. Charles may resemble Macbeth on that account, but otherwise he hardly resembles the Scottish King, as he genuinely fights for nothing in his life and is ruled entirely by his own weaknesses.

The film opens as Castle (Jack Palance) is trying to avoid negotiating his new film contract. When he was unknown he was an idealist, an artist working his chosen craft, but he has changed. Fame and fortune brought him access to women and creature comforts that softened his artistic and moral resolve, and a series of tragic mistakes and poor decisions have left him teetering on the edge of a precipice entirely of his own making. No longer optimistic or concerned with anyone but himself, his fate arrives at the door one morning in the shape of gossip columnist Patty Benedict (Ilka Chase).

Patty Benedict (with an implied “Arnold” at the end of her name) wants something from Charles. Everyone wants something from Charles, and Benedict is merely the first in line. She wants the scoop on whether Charles and his wife Marion (Ida Lupino) are splitting up. When Charles won’t play the game, Benedict goes straight for the jugular: Charles’ publicity man Buddy (Paul Langton) had killed someone in a drunken hit-and-run a few years ago, and in her opinion it’s very poor taste for Charles to have kept him on after he did 10 months in jail for the crime. She’s banking on her readers agreeing with her, and if Charles doesn’t give her the gossip she wants, she’s going to run a story on ex-con Buddy. The sudden unexpected appearance of Marion at the home causes Benedict to question her instead, only to find Marion will not cotton to being cornered by a gossip in her own home. Marion stands up for herself while Charles and Buddy try to schmooze and smooth Benedict’s feelings, but it’s too late. 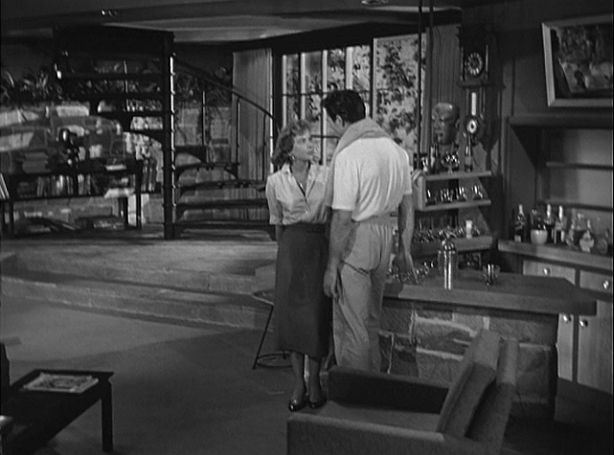 And so the slow progression of increasingly strong demands begins on Charles. Marion will not stay with him if he signs a seven-year contract with ruthless studio mogul Stanley Shriner Hoff (Rod Steiger), but she knows Hoff has dirt on Charles and will use it to force Charles to sign. Charles promises Marion he won’t, but moments after she leaves to get her things and move back in with him, he’s caved to Stanley Hoff’s demands and signed the contract. Hoff is manipulative and rotten, but it’s obvious he has not been pushed into true cruelty. When he leaves, you know he will eventually be back and things will get worse.

The last thing a man who cannot control himself needs is to be presented with a willing woman and copious alcohol, but both appear before him when Buddy’s kinky wife Connie Bliss (the punny-named character played by Jean Hagen) arrives. It seems she knows the dirt Hoff has on Charles, and wants to use it to score some bedroom time with him. Between the booze and the persistence she gets her way, but not until we learn that Charles was the one who really killed someone in that drunken hit-and-run. Her husband Buddy took the fall for his hero after being convinced by Hoff’s sleazy fixer Smiley Coy (Wendell ‘Hic’ Corey).

It turns out a lot of people know this secret, not just Hoff and Smiley, Connie and Buddy, but peroxided starlet Dixie Evans, the girl with a six martini limit. She was in the car with Charles when he killed a pedestrian, and she was paid to keep quiet with a contract at Hoff’s studio. Dixie (Shelley Winters) drinks too much and talks too much, so she’s been hinting around town for months that she knows a big secret. Smiley asks Charles to invite her over and, erm, convince her to keep quiet. Charles agrees, but when she arrives, Dixie reveals that the secret is the only weapon she has against the vile, scheming studio execs like Hoff, and she plans on using it every chance she gets. 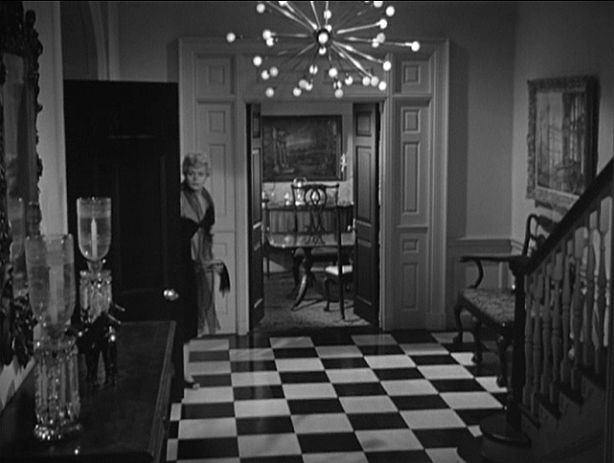 Days later, Hoff tries to pull the caring father act with Dixie to convince her to shut her yap, but she laughs in his face and refuses to cooperate. Smiley approaches Charles to get his help again, this time to silence Dixie permanently. Charles finally discovers he has a limit and refuses to be a part of the plan to serve Dixie a drugged-up martini, at which point Hoff and Smiley arrive with their blackmail material of choice: private recordings of Marion with a man she was seeing while separated from Charles. Charles fully see the depths to which these men will dive.

Marion, too, discovers that Charles was not only sleeping with Dixie during the time of the accident but that he’s bedded his best friend Buddy’s wife, which is hardly the way to repay a man who served time to cover up his own sins. Marion decides to stay with Charles, and Dixie turns up dead from a legitimate accident and not a staged one. However, unable to face the repercussions of his own failings or the violence of Hoff’s promised revenge, Charles slashes his wrists.

It is not surprising that Charles Castle chooses a solution that, in a literary sense, lets him off easy. Suicide does not work that way in real life, but The Big Knife is an allegory, practically a fable, and should be seen as such. Reality as most of us know it does not exist in this world, and it’s a mistake to judge the film in terms of its adherence (or lack thereof) to reality. However, Odets’ allegory is far too self-serving at the climax of the film. It’s undeniably obvious that he is working out his own anger from real life incidents, and the intrusion of his reality into a metaphor causes the entire scenario to crumble. 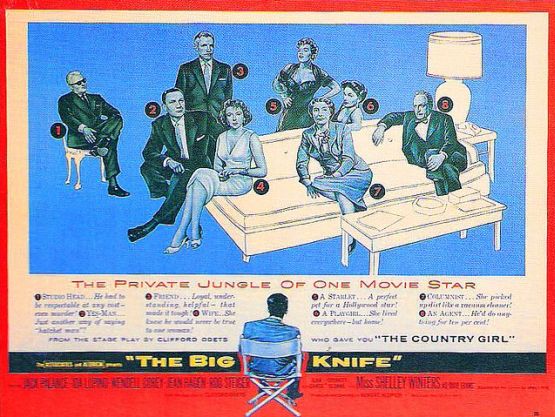 Charles is not a particularly likeable character. But, again, this is a film noir fable, so all the characters are pawns to be moved where the story needs them to be. Charles may not be likeable but he is charismatic, and his status as charismatic pawn translates to appeal in both the story and for us, the audience. Appealing as he is, he’s still eager to wallow in the self-constructed social hierarchy of Hollywood, to take advantage of everyone around him so he has a comfortable, responsibility-free life. When responsibility cannot be avoided, he melts into a spineless goo, unable to keep promises to anyone, not even himself. During the last showdown with Hoff, he can no longer deny to himself the evil behind the gossips, studio moguls, fixers and PR men, but he is too weak to face reality. He’s also too weak to face the situation of his own making, one he hasn’t paid for a moment of.

And he never will. Despite Odets’ clear claim that Hollywood killed Charles Castle, one cannot deny that Charles Castle killed Charles Castle. His victory at the end is short lived, and he undermines his own victory with the ultimate surrender. It’s possible that Castle was trying to undermine Hoff’s power the only way he knew how, and of course suicide as sacrifice fits into the mythological-slash-film noir themes of the film. But the tenuous thread by which the film holds together is snipped completely when the smug author character at the end of the film declares he will be the sole sainted truth teller, thus completing the ruin of what had been, up to that point, a solid analogy. 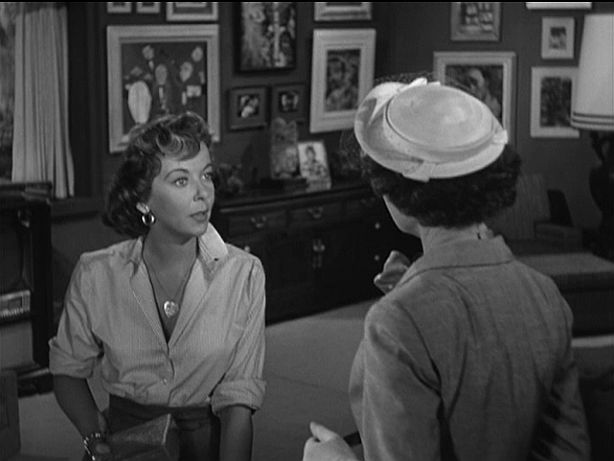 If all the characters in TBK are chess pieces, no one is more noticeably so than Marion. Ida Lupino is a terrific actress, somewhat wasted in a one-dimensional long-suffering wife stereotype. She projects betrayal expertly and turns in a solid, subtle performance. However, the characters of Dixie and Connie are the more substantial female roles.

Ida was at an interesting point in her career when The Big Knife was filmed. The year before TBK was released, Ida’s independent production company Emerald Productions (later The Filmmakers) folded. She began producing and directing film when acting roles had gone into decline in the late 1940s, but in the mid 1950s experienced a bit of an acting resurgence with iconic roles in The Big Knife followed by While the City Sleeps and Strange Intruder in 1956. That same year, she began directing and acting in television shows, and continued mostly in television for two more decades. 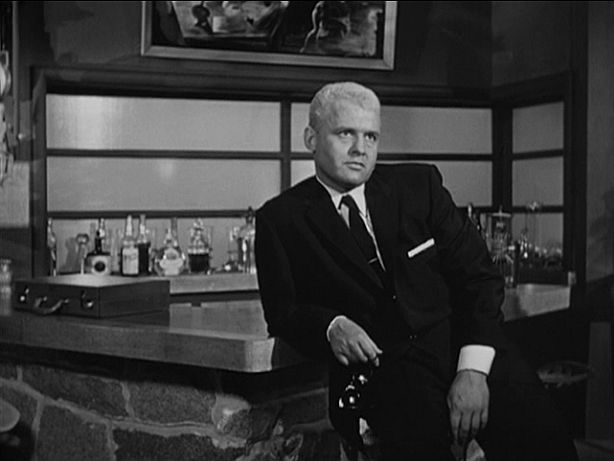 The stand out role in this film is unquestionably Rod Steiger. Much is made of his overacting, but I believe these characters are all acting even when they’re being real in the context of the film. Steiger’s Hoff is based on several well-known studio bosses such as Mayer, Cohn, Warner, and I think even a little Goldwyn is thrown in with the “embroidery of speech” comment. Judy Garland once said Louis B Mayer was the best actor at the studio, able to bring out the histrionics, effuse praise, or tears on cue to manipulate the artists in his employ. So, too, can Stanley Hoff manipulate those around him. In short, he is an actor playing a part every time he interacts with someone. 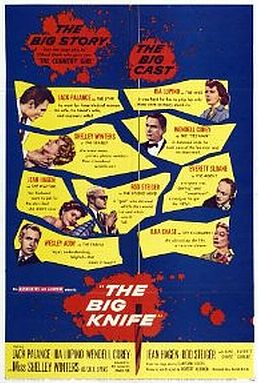 His appearance in the film is surreal, something critics are quick to point out (so they can complain about it), but I find his look works well. Hoff is manicured, sharply dressed in dark suits, a noticeable tan, nothing but a shock of bright white hair and a bulky hearing aid to indicate his age. Steiger’s hair is less grey than platinum blonde which, combined with his unlined face, makes it easy to imagine Hoff owns a portrait of himself grotesquely aging in the attic.

Odets’ play is heavy handed and misguided at times, but the characterizations are sharp. Creating a world where everyone is larger than life adds an enjoyable mythological quality to the story. The performances are excellent and are, unquestionably, the best and biggest reason to see this film.

Ida Lupino: Beyond the Camera