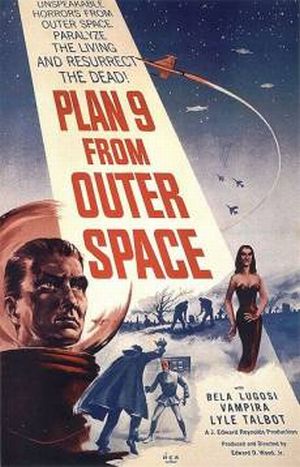 My excitement over being the first to pick Plan 9 From Outer Space for the Monster Mash Blogathon was quickly replaced with apprehension as I realized positively everything to be said about Plan 9 has already been said. To combat this disadvantage, I decided to approach P9 as movie that needed improvement and I, winner of the Best Director Oscar five years running, would grab that challenge by the ears. [1]   It’ll be fun, I said. Loadsa laughs, I said.

Let me tell you, my friends, the shocking truth: Plan 9 is unbearably overstuffed with errors. Correcting it is impossible. I was ill prepared for the sheer magnitude of ineptness contained within the frames of Plan 9 From Outer Space. That may sound ridiculously naive, but P9 has always been a film I felt had a few genuinely enjoyable and good moments. However, when you’re making lists — two, in fact, one called GOOD and the other BAD — you don’t have to watch many scenes in Plan 9 to realize the BAD column is going to overflow, spill out onto the carpet and cause a permanent stain. Not an obvious one, but the kind that leaves a lingering dark shadow on the floor. The neighbors won’t notice, but you’ll know it’s there. You’ll always know.

When Mr. Wood wrote the screenplay for Plan 9 From Outer Space, he clearly didn’t realize he had the plots for at least two movies, perhaps three, swirling about on the pages. He mashed science fiction with zombie horror and crime drama, but did not create a multi-layered work; rather, he created a mass of incomprehensibility punctuated by moments of stunning insanity. 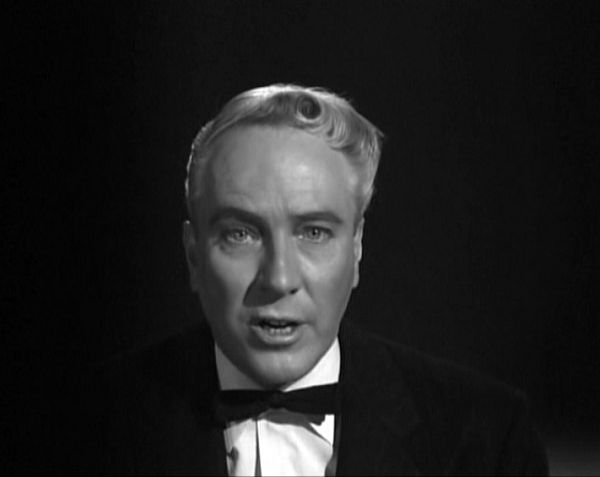 My friends, can your hearts stand the shocking facts about how bad Plan 9 From Outer Space really is?

If I were in a position to fix this film, truth be told, I would retain a lot of it as is. I’d keep the basic story. The idea of aliens who come to earth and conquer humanity by raising the dead to fight the living is pretty damn good. Plus, there are two best things about Plan 9: Tor and Maila Nurmi. 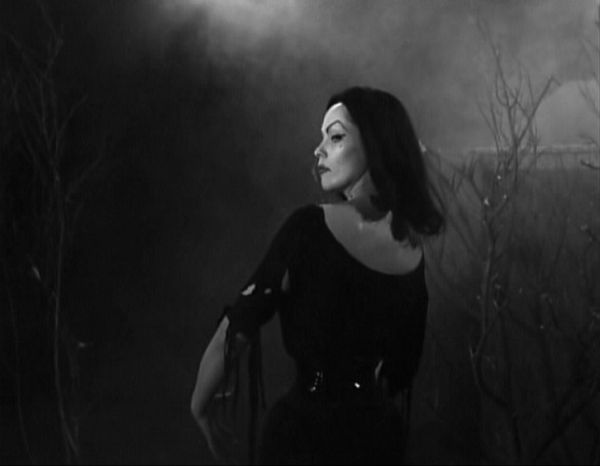 Their look is absolutely terrific, and when they’re lurching about the set constructed out of a used black curtain and a couple of vertical tree branches stolen from the city park, you don’t notice the rotten scenery. 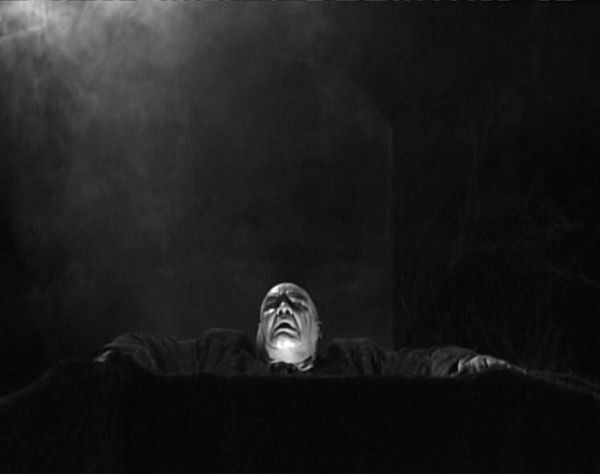 Also, keep Bela. I know, I know, it’s tacky to use outtakes of a dead actor to make it appear he is now one of the walking dead. Tackiness aside, I do think it could work. First, edit the outtakes better so they are more coherent (more on that in a moment). Then, after Bela’s character is resurrected by the aliens, use a double in ghoulish makeup instead of the bizarre face-covering shtick Ed chose to go with. It doesn’t have to cost a lot. Drive down to the local Duckwall’s and pick up a couple of packages of kiddie Halloween makeup, ask Maila for a few tips, and you’re done.

While you’re already at the downtown Duckwall’s, pick up some cheap black fabric, a set of pinking shears, and a staple gun. Tack up some of that black fabric in the background behind doors so your poor stewardess doesn’t have to keep the shower curtain closed to prevent revealing the unfinished stage behind her. Oh, and replace that shower curtain with a fabric curtain. I know, the space-age polymers in 1950s shower curtains were a sight to behold, but they have no place in an airplane cockpit. I, winner of seven Best Director Academy Awards in a row, will not budge on this detail. [2] 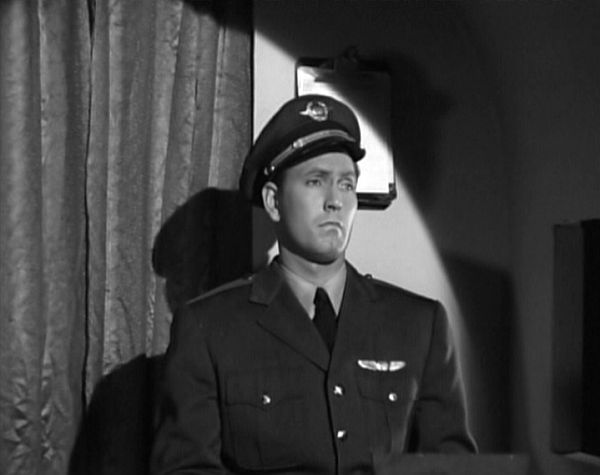 Understand that Ed’s approach to writing may frustrate me, but it does not surprise me. The man knew time was money. So I understand his methods, but I do not approve, because it is clear that 15 minutes here and 30 minutes there could have improved the film by an order of magnitude. The script is one of those 30 minute deals.

Have someone else edit your movie, Ed. The editing sucks out loud and is probably the single most destructive thing in the film. Everybody thank Dr. Film for saving you the bone-crushingly tedious task of trying to read my own attempts to describe how this film could be saved by some moderate editing skill. While I was working on this entry, Dr. Film posted his re-edited version of the graveyard scene in P9 where the wife is being chased by the moseying dead. It’s a terrific read with video clips to illustrate his point. Basically, my plan is to get a time machine and send Dr. Film back to 1950whatever to fix Plan 9.

Another 30 minute fix would be getting some extra fishing wire to bolster those damn wiggly wobbly UFO hubcaps. And would it have killed Ed to put this poor guy outside next to a tree instead of inside in front of a blank wall? 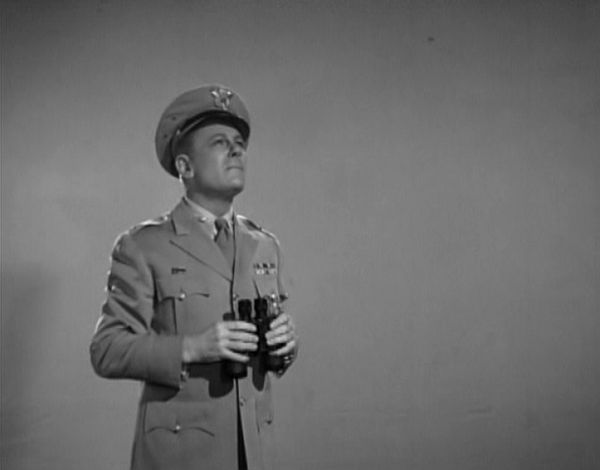 He is so lonely, not even a delightful potted fern to keep him company. I should note that I would also address Ed’s inability to keep day and night straight, but that depresses me so much I simply can’t deal with it right now. The blank grey walls have made me too sad.

Other Things I Like About Plan 9 From Outer Space In No Particular Order:

* The stock footage is not eye-gougingly awful. It is mildly appropriate, especially if you squint. Keep it. 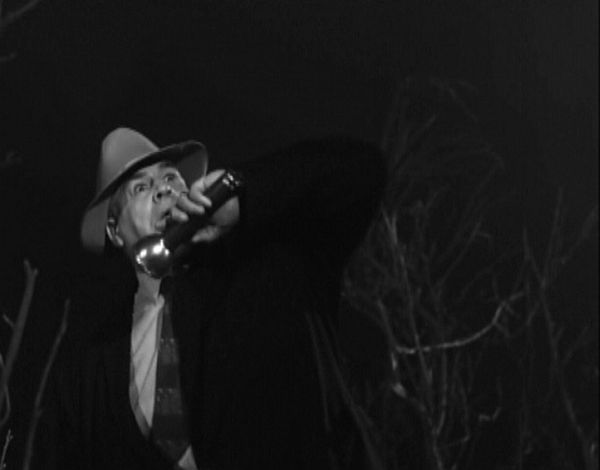 * Tor as a police officer. Work with him for a couple of minutes on diction for the lines he slurs and you’re good to go.

* Gregory Walcott. His acting is surprisingly good in the first scene with his wife, but he turns sullen and distant, perhaps even a bit sleepy, in the following scenes. For those of us watching the movie to laugh, his angsty gloom face is absolute hilarity, but we’re trying to improve the film here, so we need to get Walcott to bring his B game to the table instead of his Q game. (The Q stands for NyQuil). 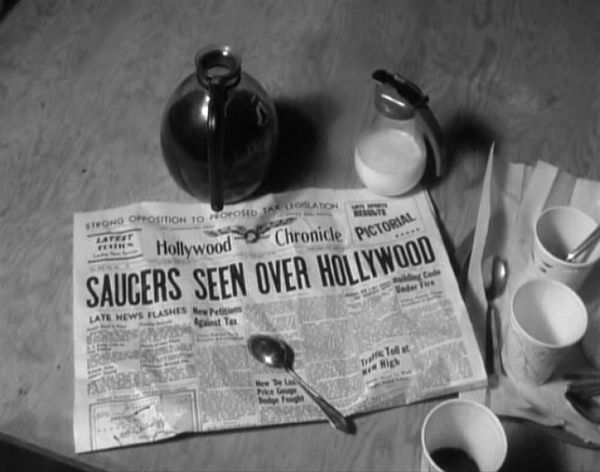 * Saucers Over Hollywood! A nice touch. If the only place you can film is LA, use LA. Don’t try to hide it by pretending it’s really Montana. * And, finally, the bitchy aliens. I adore these smug bastards, whom I have dubbed Usenet Aliens because they spend their free time hilariously failing at everything they attempt while repeatedly accusing those around them of stupidity. John “Bunny” Breckinridge and Dudley Manlove were experienced actors who, if directed appropriately, could have been really great. Instead, Manlove flounders with horrible dialogue, and Breckinridge indulges in sweeping Susan Hayward arm gestures and eye rolling. Not that I don’t love him for it, but honestly, the aliens as a whole come across as laughable for being sissies, which I know Mr. Wood did not intend, but the result is undeniable. Rein Bunny and Dudley in, give Joanna Lee something more to do than play the stereotypical 1950s inept female cohort, and you’ve got a winner.

It’s impossible to deny that Plan 9 From Outer Space has captured our hearts precisely because it is so flawed. We can all see and enjoy those wobbling gravestones and hubcap spaceships; no one can ignore Lyle Talbot saying “flying saucers” about a dozen times over the course of 60 seconds. But there is a genuine earnestness to Edward D. Wood, Jr., more overt in Glen and Glenda but still obvious here, and we love him for it. 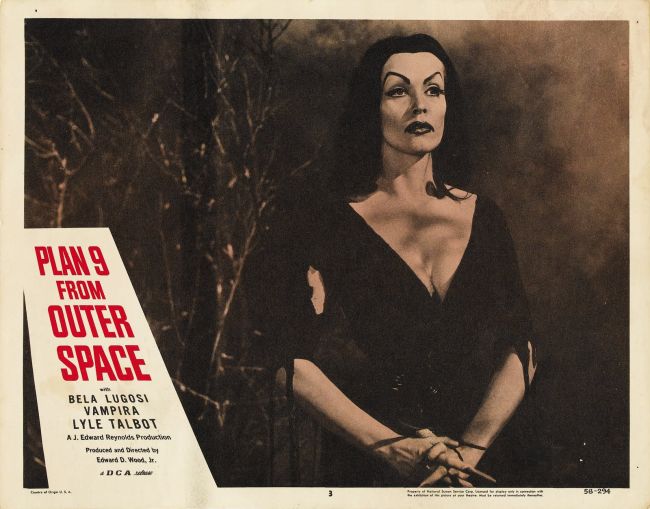 BadMovies.org: A great write up with unintentionally hilarious comments. Count how many people skewer Ed for numerous errors while making plenty of their own. (My favorite: The person who thought the movie was made in 1971.) They’re all Usenet Aliens!

The Unbroken Dream of Edward D. Wood, Jr.: I can’t pass up an opportunity to once again suggest you read Mykal’s amazing post about Ed Wood’s Glen or Glenda.

Also, I am aware there is a remake.

[1] I have not won any Oscars and yes, that is an obscure Elton John reference, thanks for noticing.