This week’s Hit Me With Your Best Shot feature for The Film Experience is the Katharine Hepburn classic Summertime (1955), directed by David Lean and also starring Rossanno Brazzi, Isa Miranda and Darren McGavin in a small part that gets disproportionately high billing. Summertime is part of their Katharine Hepburn theme week, culminating on Sunday on the anniversary of what would be her 106th birthday.

Legendary cinematographer Jack Hildyard filmed Summertime and the gorgeous Venetian scenes throughout. Many of the scenes are rather pedestrian, almost like a travelogue rather than pure cinema: rarely adventurous but always gorgeous. Hildyard is responsible for some of my favorite cinematography, especially in iffy films like Casino Royale (1967) and Modesty Blaise (1966). There is a strange feel to the framing in Summertime I haven’t seen in other Hildyard films. At first I thought it was just because I’m not used to seeing a 1950s film in Academy ratio as the Criterion Collection disc I rented is in, but then I learned Summertime was probably filmed in 1.85:1. As Bob Furmanek said in that thread last year, director Lean composed in 1.87:1 but protected for 1.37:1. It’s obvious once you see it (not as obvious as in the Plan 9 example they also talk about; that one is so obvious even I noticed it back when I blogged about it); however, the only copy of Summertime I had available was the 1.37:1 Criterion version, so I hope my screencap is acceptable. 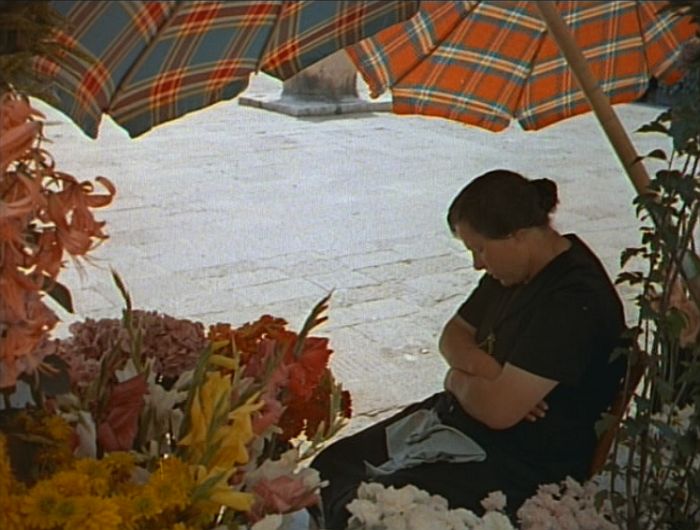 Summertime is a bit of a departure for Hildyard, primarily because of his curious habit of filming most of the gorgeous scenery without any of the stars of the film in the frame; all of the beautiful scenery shots are mostly without any humans at all, or tiny ant-like humans from a great distance. In Casino Royale he integrated people into the shot, almost like props, and in Modesty Blaise, he lavished attention on both Vitti and Bogarde.  This movie was different, which is why I liked this particular shot so much: It’s no picture postcard shot of a cathedral. That’s an uncredited extra, no one you see except in this brief moment, her nap brilliantly setting up the slow, hot afternoon that Hepburn is about to brave. It’s my favorite shot of the film because it’s so evocative of the moment, and also the most painterly of the shots. The film opens with paintings under the credits, and this is framed, even in probably the wrong aspect ratio, like a Mary Cassatt painting. I love it.