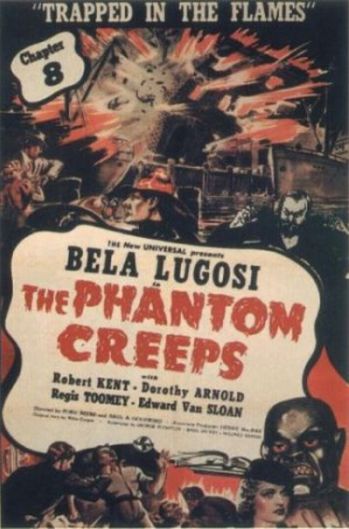 The Phantom Creeps
Chapter 8: Trapped in the Flames

When we last left G-Man Bob, he was about to crash yet another airplane, leading us to several inevitable questions: How large is the FAA file on this guy?  Has he ever actually landed a plane? What are the gross annual earnings of the half-dozen scrap metal businesses that thrive on the broken, mangled airplane wreckage Bob leaves in his wake?

The crash heralds a few minutes of what I refer to as Mostly Dark Theatre; it’s impossible to see what is going on, and while it might be the terrible print that exhibits a plethora of deep scratches and murky greys, the lack of light also conveniently concealed poor special effects.

The bad guys and their hired sailors gloat about taking down G-Man Bob, which you’ll notice they did with a couple of department store rifles they picked up as an impulse buy at K-Mart while grabbing some snacks and a couple of folding chairs. The thing is, the spies didn’t really succeed at anything. G-Man Bob is contractually obligated to destroy all planes whether he’s being shot at or not . 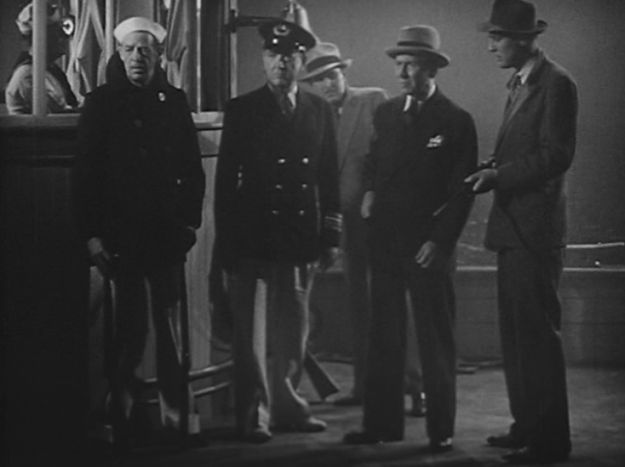 Note the extra on the left: That’s character great Al Bridge, known mostly for his roles in Preston Sturges flicks. He does pretty much nothing in chapters 7 and 8 except say “Yes, sir” and stand around. By the time he was in Creeps he had been in over 100 films, mostly small roles, though usually not thankless bit parts like this one. It’s true, The Phantom Creeps demeans us all.

Before slamming elegantly into the pier, G-Man Bob bailed out of the plane, requiring stalwart sidekick Regis Toomey to go search for his buddy.  I will assume Toomey wants to find Bob floating face up and not the other way around, though sometimes I’m not so sure. There’s an underlying hostility there, is what I’m saying. 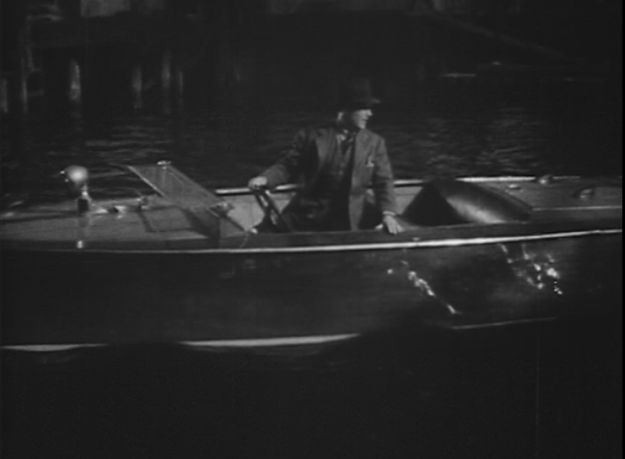 Reeg illustrates well his finely honed FBI search and rescue skills by hopping into a boat, sailing out about 12 feet from the shore and yelling, “Hey, Bob!” Your hard-earned tax dollars at work, ladies and gentlemen.

The Toomster hollerin’ all over the place doesn’t attract the spies because they’re just as dim as everyone else in this serial, though it does manage to attract Bob, who swims to the boat because Regis can’t sail it to him for some reason that I’m sure has nothing to do with the fact that he is standing in something that is less a boat than it is a cardboard prop with Saran Wrap glued to it to prevent it from sinking for the 10 minutes they need it. Reeg pulls Bob into the boat, a moment which becomes unintentionally hilarious as actor Robert Kent spazzes out and kicks and squirms so much Reeg almost throws him back into the water and shouts “CUT!” out of frustration.

The pair investigate the yacht but the spies have already scarpered. Despite the fact that the crew was visibly helping the spies moments earlier, the captain says oh hey no, mang, those dudes were just renting the yacht, we thought they were shooting delicious seagulls in the middle of a densely foggy night and not at you in the plane, dude, for serious. Well, no, I’m lying to you; that’s just what I wish had happened.  The captain does indeed explain that the spies merely hired out the yacht, and this is presented as both truthful and fully explanatory, which is as confusing as it is boring. 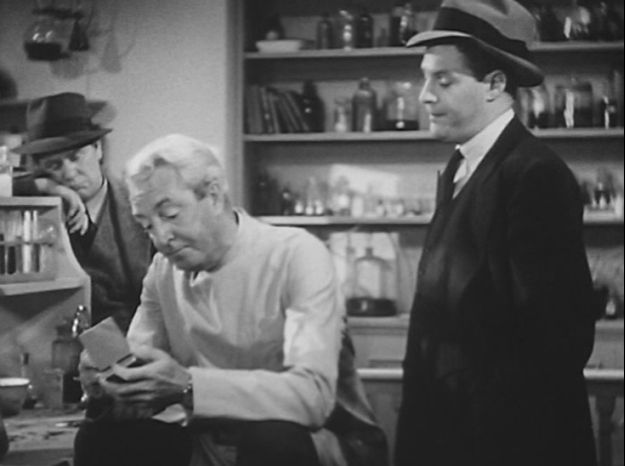 Speaking of boring, the next day everyone hangs out at Dr. Mallory’s place as he makes a new neometer to replace the one he lost and which the spies now possess. Regis is just straight up sleeping on the job here, both the fictional FBI job and the real world acting job. I’m telling you, the guy naps through 80% of this serial, and you can’t hate on that because it’s the smartest thing anyone involved in the cinematic arts has ever done. 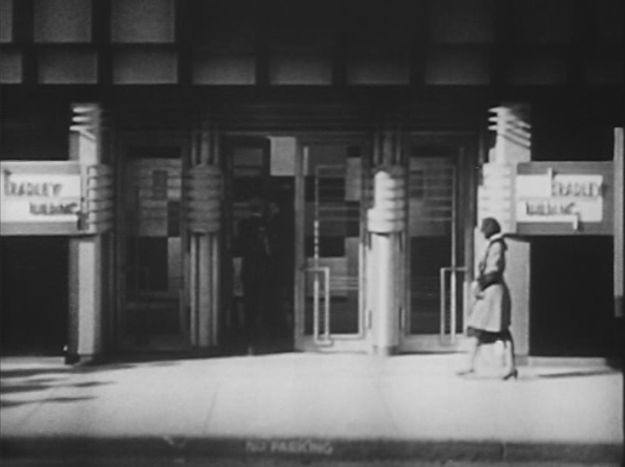 We’re now back at the lovely Bradley Building, which BBFF Ivan has recently discovered houses not only our traitorous spies and the sinister Dr. Zorka, but also the criminal masterminds fighting The Green Hornet! The Bradley clips are undoubtedly reused footage, probably from a film made a good decade prior to The Phantom Creeps. Check out the fashions on those that walk by the building. It’s hard to tell, but the woman is in a late-20s outfit complete with cloche hat; another woman on the left comes along immediately after in a tam o’ shanter and outfit straight out of Clara Bow’s It. This footage was clearly not shot in 1939.

The spies finally decide Dr. Zorka is alive, just as the Feds have recently figured out. The spy leader holds court in his office, reviewing the scuffle between his henchman and the mysterious new tenants the previous day. With a delightful sense of smug satisfaction, he declares, triumphant: “The office was taken under the name of Zane. Note the ‘Z’ — as in Zorka!” 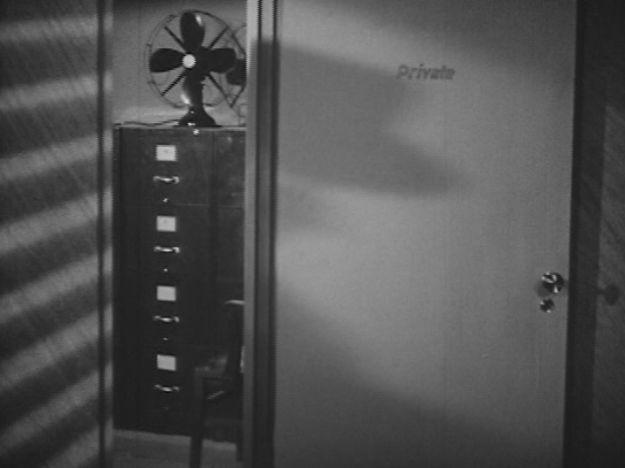 Dr. Z concocts a plan to get the meteorite back by invisiblating and sneaking into the spies’ office. The filmic concept of an invisible man has changed throughout the serial, originally appearing as nothing, merely the camera filming where one would imagine Zorka to be.  That morphed into a vaguely humanoid-shaped transparent white glow, which in this episode is now paired with the shadow of fluttering fabric nearby. Later, the fabric is discarded and a cut-out of someone in a fedora is used to cast a shadow at the same time the transparent white oval is used, which is a nice enough effect on paper, but makes so little sense in reality that I can only shake my head and sigh. It doesn’t help that the backlighting sometimes creates two fedora heads floating about.

Another thing that doesn’t help is that the spies reveal in minute, unnecessary detail the location of their meteorite in the course of what is supposed to be general conversation, giving InvisiZorka the exact info he needs at the exact time he needs it. The stupid very literally pains me. Guys, if you knew how bad my head hurt after summarizing these things… 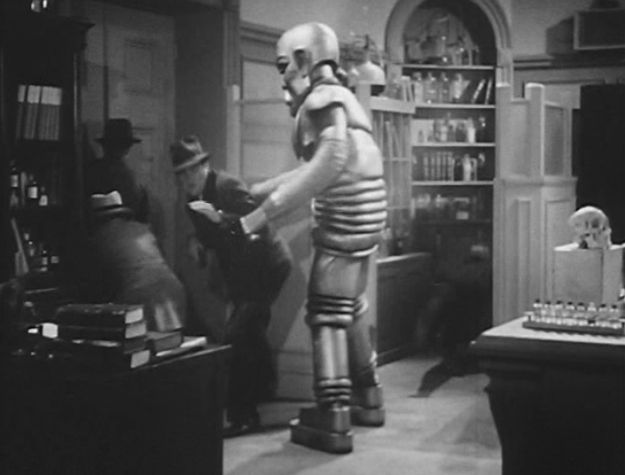 Cinematic Exedrin in the form of Iron Man is close at hand, however. The spies, deciding that a Zorka alive is a Zorka hiding out at his charming mansion slash scientific house of horrors, go barreling in the front door, wander around the lab, and get sneaked up on by the Iron Man. Because a 2-ton iron monstrosity is nothing if not quiet and sneaky.  He proceeds to make mincemeat of about half the spies while the rest run around like scared kids on Halloween.

G-Man Bob, by the way, is peeping in a window, watching all this unfold. When the scaredy-cat spies run off, Bob and Reeg give chase, ending up at a warehouse near the pier Bob just destroyed the night before. They go in the first door they see and it just happens to be the laboratory where the spies’ scientist is working on the meteor. 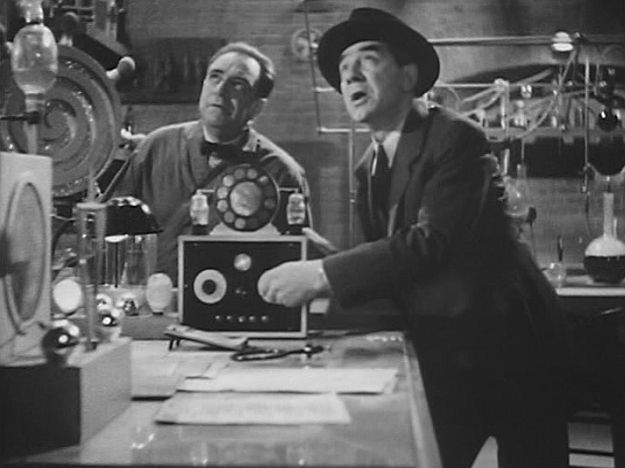 In case you were wondering, and I know you were, this is the episode where the iconic publicity still of Monk and Zorka originates.

Bob and The Toomster lock a hapless security guy in a closet as they sneak into the lab, having forgotten altogether about the spies that they followed to the warehouse district in the first place. The spies, being marginally less idiotic today than the Feds are, turn the tables to follow the G-men, but not before just chillin’ and lookin’ all nonchalant and shit. 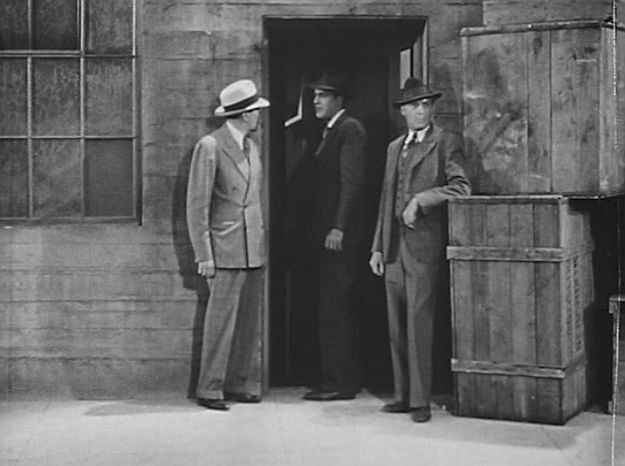 And here’s where the serial turns into The Maltese Bippy. First the Feds get the meteor from the scientist, but then they’re surprised by the spies who get the meteor back, then InvisiZorka shows up and gets the meteor while everyone who is still corporeal punches each other in the face. 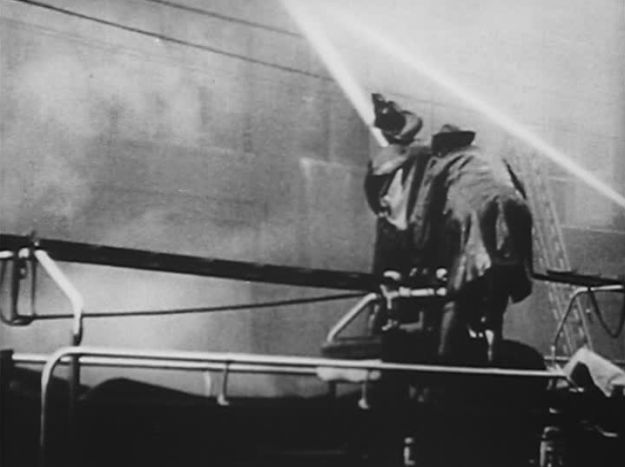 And then everything burns the fuck down.

This is marginally more exciting than the usual endings we’ve suffered through, you and I, though any disbelief that may have been suspended vaporizes like Dr. Mallory’s competence once the stock footage arrives. As you can see above, the warehouse is a wooden building, but Zorka is seen parked across the street in front of a row of brick New York tenements. That was apparently done to explain the brick buildings that show up in scenes from old movies that are used once the fire really gets going.

Footage from a previous film, which appears to be an early talkie from about 1929-1931 — maybe the same one the Bradley Building shots are from — shows the large brick National Produce Company in flames as firetrucks race to the scene, weaving through a sea of Model Ts and past crowds of flappers. Once the firemen reach the National Produce Company, footage changes to what appears to be shots of an actual fire, also from the late 1920s or early 1930s. 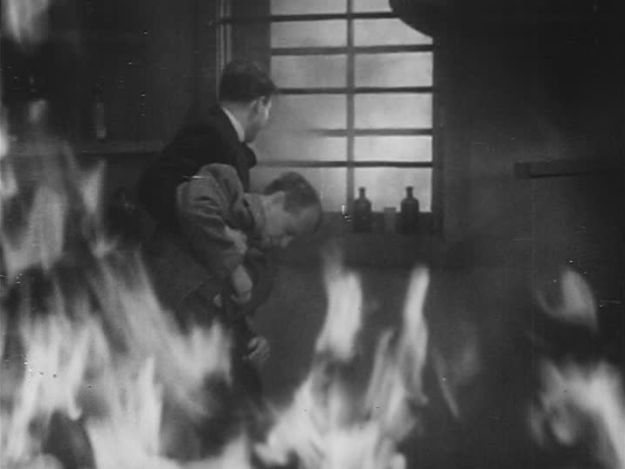 Meanwhile, on the backlot, the spies and Zorka have escaped, leaving Bob and Reeg behind. Reeg is unconscious again, and Bob must try to rescue him before it’s too late. 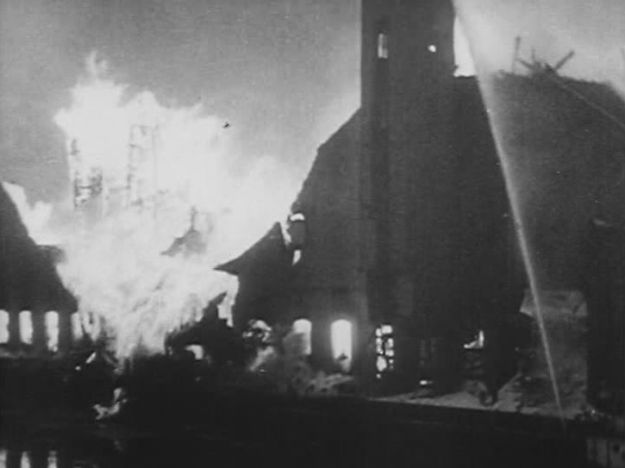 Much like The Phantom Creeps lied to its audience, I have lied to you, dear readers. Those low-rent character actors floating about in the bay do not appear in this episode, but I promise you they will be here next week, same Creep time, same Creep channel.